CORAL GABLES, Fla. – The Miami Hurricanes waited 21 days between games and it felt like an eternity. For Navaughn Donaldson, 21 days was nothing compared to the 372 that elapsed since he last stepped on a football field.

Donaldson, who was a three-year starter on Miami’s offensive line, made his season debut Saturday at Duke after missing the first eight games recovering from right knee surgery last year. The 6-foot-6, 350-pound senior worked hard to come back from his injury and all of his efforts were rewarded when he was called into action against the Blue Devils.

“It felt good, especially to be playing with the guys again,” Donaldson said.

A veteran presence in Miami’s offensive line room with over 30 career starts, Donaldson saw his junior season come to an end at Wallace Wade Stadium a year ago when he sustained an ACL injury that required surgery. A little more than a year later, Donaldson heard his name called when starting left guard Jakai Clark went down with an injury and the big man was back in action on the same field he last played on.

“I think it was pretty cool, I wasn’t here obviously a year ago, but to know that’s the same field I think he suffered his injury on a year ago and that to be the same field he was able to come back, maybe a little bit of a silver lining there,” offensive coordinator Rhett Lashlee said. “Nicks and bruises happen in games and having a guy like Vaughn cleared and ready to go with experience, we felt comfortable putting him in there and not having to maybe put any more strain on Jakai.” 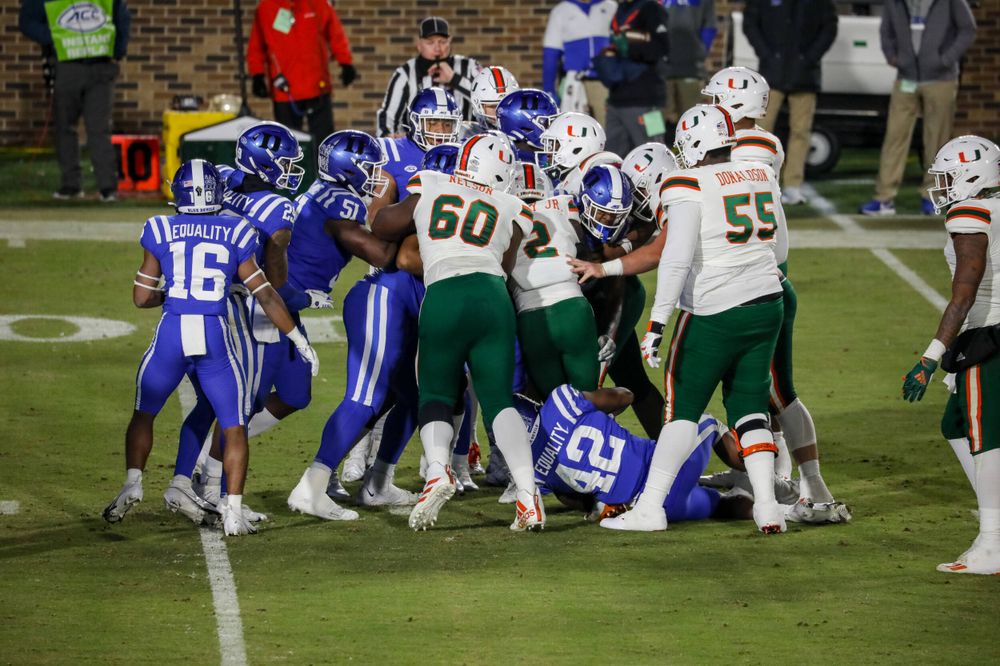 Navaughn Donaldson played a key role in his first game back since suffering a season-ending knee injury at Duke in 2019.

Donaldson was in uniform for No. 9 Miami’s game against Virginia Tech on Nov. 14, but did not play. The 21-day layoff between the game against the Hokies and the contest Saturday at Duke was largely devoid of practices, so Donaldson did not benefit from getting extra work before his 2020 debut.

“Just a courageous effort to get back in there,” head coach Manny Diaz said. “You talk about no training camp, no practices September, October. I’m talking practice, pads on, ball-on-ball, full-speed reps.

“This is actually a true statement, which is very unusual — He’s probably had more full speed reps in a game than he’s had in practice,” Diaz added. “Just the nature of when he came back and even when he started to get healthy we went away for a couple of weeks, so not easy to do, but because he’s been in games before and has some experiences, he was certainly able to help us out.”

Ever since he was cleared to play ahead of the Virginia Tech game, Donaldson has had a ready to play mindset. He played for most of the game before Ousman Traore replaced him in the fourth quarter with Miami leading by 42 points.

“You get tired but you have to push through it when you’re tired,” Donaldson said. “Like coach Diaz said, I didn’t really have that long back in practice. I really only had about two weeks to really get in and practice. That’s not ideal but the team needed me and I had to step up, so I did.”

The veteran lineman stepped up in more ways than one. Beyond just filling in for Clark, Donaldson was a difference-maker on the Miami offensive line. While there were several impressive moments, his block on Cam’Ron Harris’ 34-yard touchdown late in the opening quarter was his biggest highlight of the night.

“Obviously that block is hard to miss,” Diaz said. “There was a hole between Durham and Chapel Hill that Cam could run through on that play. He did a really nice job. He provided the ability to move people off the line of scrimmage, which was encouraging.”

Donaldson could not really enjoy the play in the moment because he was too busy executing his assignment, but he enjoyed celebrating with his teammates when he got back to the sideline.

“It was good and I felt happy to see how that play turned out,” Donaldson said. “Going into the play, my mindset was just to play hard and finish the block. That’s our job and then if Cam gets a good read, we know he’s going to do his thing. After finishing the block and just looking up and seeing him score, it made me feel good and like I belonged back on the field.”

Lashlee was pleased with Donaldson’s season debut and his first action in the new Miami offense. Adding a player of his caliber to Miami’s offensive line can only benefit the Hurricanes.

“Our second touchdown, the touchdown run for Cam, they blitzed the linebacker right into the hole and Vaughn smacked him and the hole was twice as big all of a sudden,” Lashlee said. “It was good to have him out there. It was good for him, from a confidence standpoint, to get out there because we’re not going to just need him next year but we’re going need him down the stretch.” 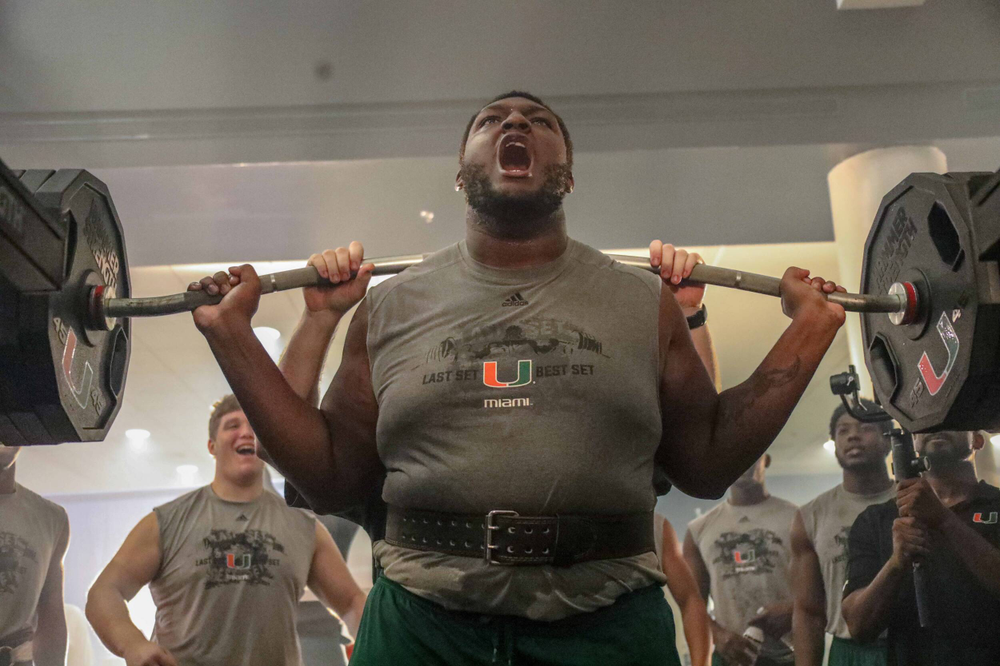 Donaldson's physical strength is impressive, but he gained a new sense of mental fortitude through his rehab process.

Confidence plays a vital role in Donaldson’s success. A ballyhooed recruit out of Miami Central High School, Donaldson was a Freshman All-American and earned All-ACC honorable mention as a true freshman in 2017. But Donaldson admits his career has not gone exactly how he had hoped. Instead of wallowing in self-pity, the local product believes he is in a much better position to succeed thanks to a new outlook on things.

“My career has gone through its ups and downs. There’s just been a lot of challenges that have been thrown my way and I didn’t really handle them how I wanted to handle them,” Donaldson said. “But I’ve built from that experience and come back in with a new mindset where I just have to take every day and make the best out of it. Even if it’s a day where I’m not feeling my best, just smile, have fun, work hard for each other, work hard for the person next to you. That mindset is what really helped me get better.”

In addition to his new mindset and newly repaired knee, Donaldson credits his work with Miami director of rehabilitation Jeff Ruiz and his staff for getting him back to full strength physically, as well as helping him find mental strength that he did not have before.

“The most difficult part of rehab was trying to bend my knee back after having it stuck for six months, but I have a really great training staff here at Miami that helped me a lot,” Donaldson said. “Working with Jeff and the others, they made it fun to come in every day and get better and Jeff pushed me to work hard every day. Before I got back playing football, I was able to squat 500 pounds and them helping me get back to that helped me be able to believe in my strengths and really pushed me.

“I was able to build back my strength and stamina and be able to really understand how my knee feels and learn to trust it to play again,” Donaldson added. “The training staff really helped, not only physically but mentally, too.” 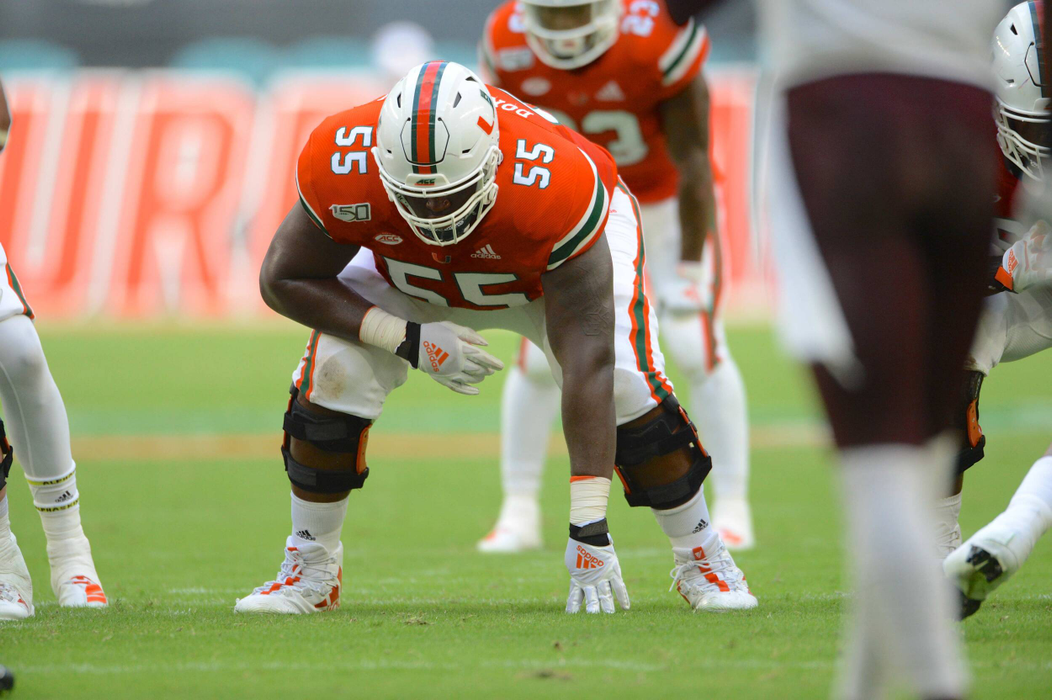 Quarterback D’Eriq King got his first opportunity to play behind Donaldson and the Miami signal caller came away very impressed.

While King learned what it was like to have Donaldson blocking for him, center Corey Gaynor was happy to line up next to one of his closest friends once again.

“Me and Vaughn came in in 2017 together. We’ve been really good buddies for four years now, and it’s great to see Navaughn get the redemption,” Gaynor said Saturday night. “How heroic is it that at this field around this time that he hurt his leg and then he was able to play a football game tonight? That is a blessing.”

The duo made 12 starts alongside each other in 2019 before Donaldson sustained his season-ending injury. For Gaynor, it was special to see his good friend get some redemption after all the effort he put in to get back to playing football.

“Navaughn is a big man and he has to work extremely hard, anybody coming back from injury has to work extremely hard, but Navaughn especially because of the stuff he had to do to strengthen his knee, to strengthen everything else to get back to playing shape,” Gaynor said following the win over Duke. “So, I’m extremely proud of Navaughn. He showed how much he loves Miami, how much he loves this team, by being out there tonight when Jakai went down.” 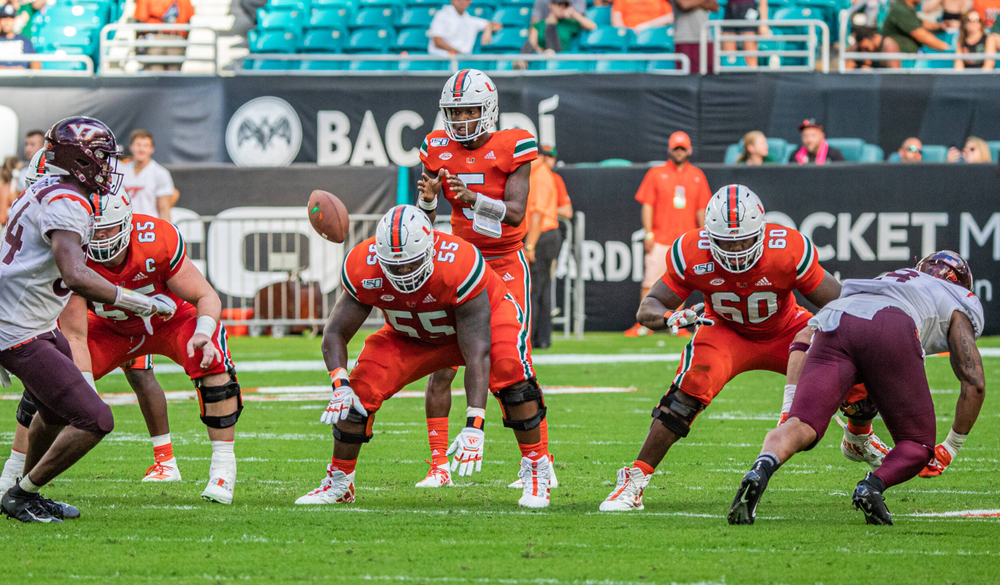 Donaldson (55) and Gaynor (65) came to Miami as members of the 2017 recruiting class and have been close friends ever since.

A humble player, Donaldson does not take much credit for his success on Saturday night. Instead, he points to his fellow linemen and new offensive line coach Garin Justice for helping motivate him.

Justice is Donaldson’s third position coach at Miami and the pair have built a strong bond that the senior offensive lineman believes has made a big difference in his mental and physical performance.

“I guess you can say, ‘third time’s a charm,’” Donaldson said. “I love coach Justice. He’s an amazing person who comes to work every day and he inspires us. He’s a chill dude and he’ll make jokes with us and stuff and but we know that when it’s time to get to work, he’s going to push us to get better. He showed us how to look at little details and understand that if we make a mistake, you can understand what the mistake was and how to fix it. He really inspires us to get better every day.”

Justice knows the value that a player like Donaldson brings to his unit. Not only can he be an experienced presence, but he has natural physical gifts that make him an outstanding talent. But the coach is not going to push Donaldson too much and risk having a setback.

“He’s a guy that I would like to slowly mix into games, slowly get him back,” Justice said ahead of the Duke game. “Just because we do think very, very highly of him but at the same time we don’t want to put all the load on him and now we start back at square one. We just kind of want to take it day-by-day, ease him into it, but he’s been really good the last couple weeks before shutdown.”

"After finishing the block and just looking up and seeing him score, it made me feel good and like I belonged back on the field.”

Being able to ease Donaldson back is not a luxury that any team would have. But Miami’s depth on the offensive line allows the Canes to work him back in moderately and still have success while doing so.

“Having that depth and competition in the offensive line room just does something to me, it builds excitement,” Donaldson said. “When I see [DJ] Scaife get his stuff right or Jakai getting his stuff right, that just excites me and makes me want to work even more. Of course, having a great chemistry with everybody on the line helps, too. There are just a lot of people doing good and you just want to do good, too. This year more than any other, we definitely come to practice ready to work every day.

Now that he is back in action, Donaldson is helping the Canes win again, too.