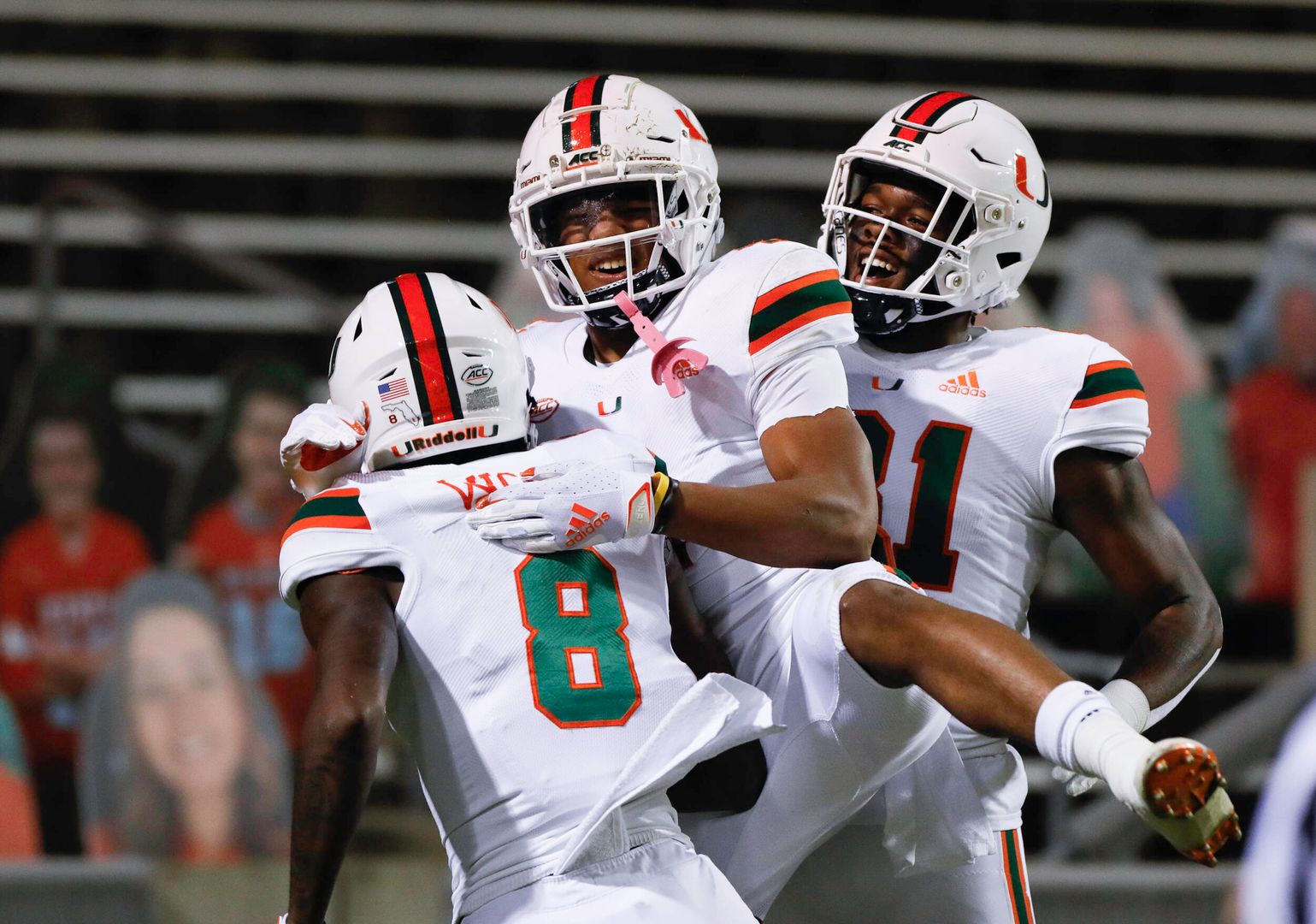 RALEIGH, N.C. – It was a night worthy of cheers, smiles, and even a few happy tears.

After a week that included a series of only-in-2020 challenges, the 11th-ranked Miami Hurricanes found themselves on the wrong end of the score early in the fourth quarter at NC State.

But their veteran quarterback, his go-to receiver and Miami’s kicker weren’t about let things stand.

Ultimately, all of that helped Miami rally for a 44-41 win that not only helped the Hurricanes match their win total from a season ago, but also keeps them near the top of the ACC standings as they continue their push for a potential berth in next month’s conference championship game.

“At halftime we were on the ropes and the leadership of this team came into the locker room at halftime and calmed everybody down,” head coach Manny Diaz said. “We weren’t ourselves. The penalties…we were just not giving ourselves the chance to win the game and guys were starting to press in the second quarter. You could see the strain on their faces.

“We came into halftime, we regrouped. We knew it still wouldn’t be easy in the second half. We knew there would be adversity…but we knew we’d win the game if we stuck together and that’s exactly what we did.” 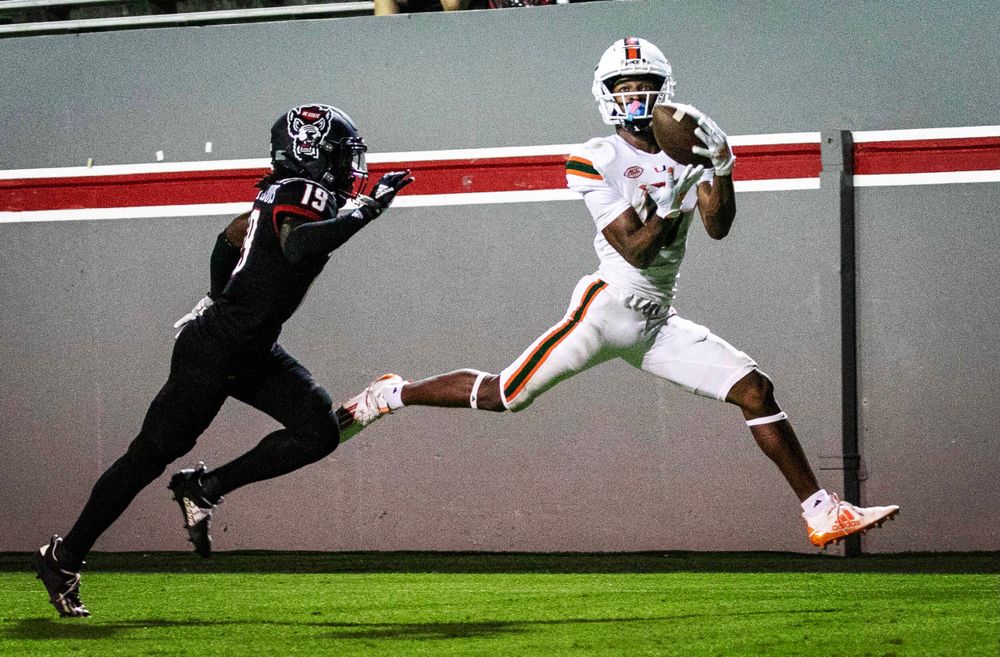 According to the Associated Press, Friday’s win marked the first time the Hurricanes picked up a victory after trailing by 10 points in the fourth quarter since their 27-23 win over win over North Carolina on Oct. 17, 2013.

Now that the first game of their second-half push has gone into the win column, here are 10 things the Hurricanes can take from their performance as they begin preparing for another crucial road game, this time at Virginia Tech next week.

1. A comeback in the face of adversity

For college football teams across the country, this season has featured a series of extraordinary challenges. Spring practices were canceled, as were many summer workouts. And in recent weeks, Miami has dealt with so many players being held out of practices, the Hurricanes have had to get creative on Greentree to prepare for the Wolfpack.

Once on the field at Carter-Finley Stadium, Miami found itself in a quick deficit and eventually, a back-and-forth slugfest that resulted in a 10-point deficit in the fourth quarter.

In years past, all of that might have proven too much for the Hurricanes to overcome, particularly on the road. But on Friday, there was no quit. Miami rallied back, its offense scoring 13 unanswered points and its defense holding when it needed to most.

There was, in adversity, no pointing fingers, no panic, nothing but determination. And eventually, a win.

“This is college football in 2020. You have to be able to score points to win and that’s all part of it. I will tell you, what we had to do this week in practice with the guys that we had out … We had practice on Friday with abut 70 guys at practice. We had graduate assistants pretending to be defensive backs for scout team. We had kickers playing wide receiver against our defensive scout team because we are just so thin now with the players we have out,” Diaz said. “The way we practiced for this game is as unusual as any game that I’ve ever practiced [for]. Does that have an effect on the game? Can’t measure it, but it doesn’t matter because you still have to go win the football game.

“For our guys to overcome, not just tonight, but the last 13 days hasn’t been easy. They’ve had to do some things that football teams don’t normally have to do to get prepared to win a game. To come out, all we can do this week is go 1-0 and it’s mission accomplished.

In his seventh game as a Hurricane, King quite possibly put together the best single-game performance by any quarterback to wear orange and green.

King completed 31 of 41 passes, throwing for 430 yards and five touchdowns. He rushed for a game-high 105 yards and wound up adding his name to the Miami record book.

Until Friday, no Hurricane quarterback had ever rushed for more than 100 yards in a single game. And until Friday, only one quarterback – Stephen Morris – had thrown for 400 yards and five touchdowns in a game. 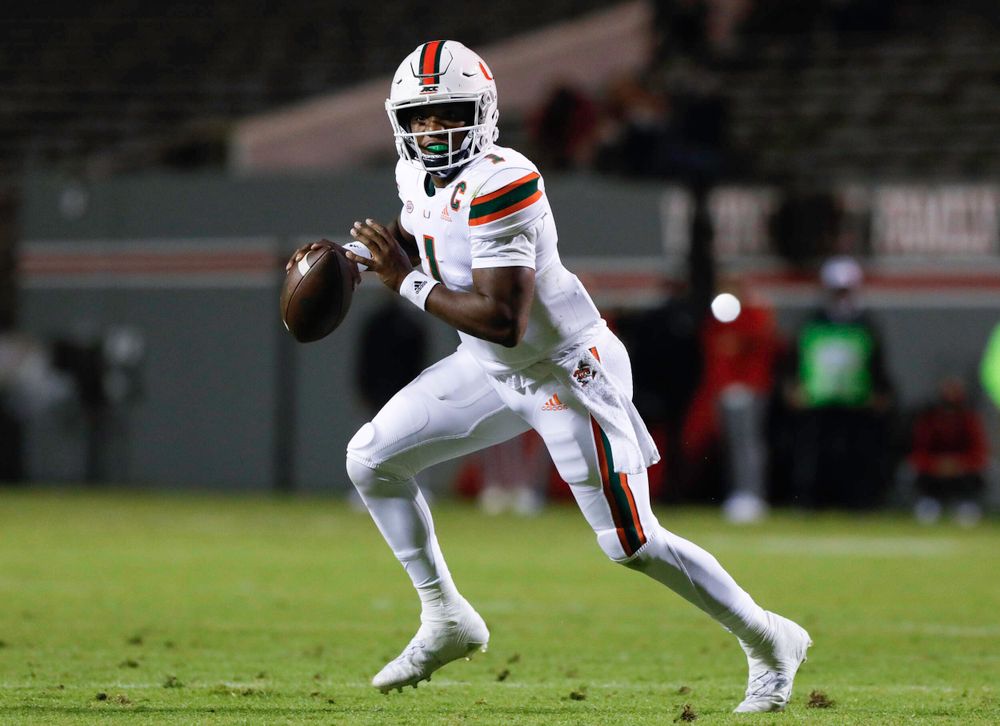 But it wasn’t just King’s performance on the field that made a difference teammates noted.

“He’s a positive guy. He’s always coming in ready to work. He’s always there early. So seeing that, the guys around him … he’s a motivation,” striker Gilbert Frierson said. “He tries to keep everyone uplifted through whatever situation. He always comes down and says, ‘Let’s go, D, let’s get tough, D. Let’s stop them, D.’ Hearing that from the leader of our team is amazing. We put it in our heads like ‘Let’s go.’”

Added Diaz, “What D’Eriq King did [Friday night] was phenomenal. Throwing for 430 [yards] and running for 105 [yards], that’s absolutely remarkable and was at his best when his best was needed.”

Against Virginia on Oct. 24, Harley had the game of his life with a career-high 10 catches for 170 yards. Against NC State, the receiver delivered another memorable performance.

Harley finished with a game-high eight catches for 153 yards and two touchdowns, including the eventual game-winning score. He was overcome with emotion as he came off the field and seems to be hitting his stride during his senior year.

“Me being here for four years, it’s been a long journey, a long road. I came to a point where I wanted to quit and where I wanted to give up. I’ve just been working hard ever since and I never gave up,” Harley said. “Coaches always kept me on my feet. My brothers kept me on my feet. They told me to keep pushing and to keep working and I just kept working hard until my name was called. Everything came into the light. Hard work pays off. Just keep going and stackin’, stackin’, stackin’ every week. Trying to finish strong on my senior year.

4. Will Mallory has another big night

While fellow tight end – and roommate – Brevin Jordan has been out of the lineup with an injury, Will Mallory has a boon for the Hurricanes and that trend continued Friday.

The big 6-foot-5, 245-pound tight end had six catches for 78 yards against the Wolfpack and his first-quarter touchdown gave the Hurricanes their first score of the night. 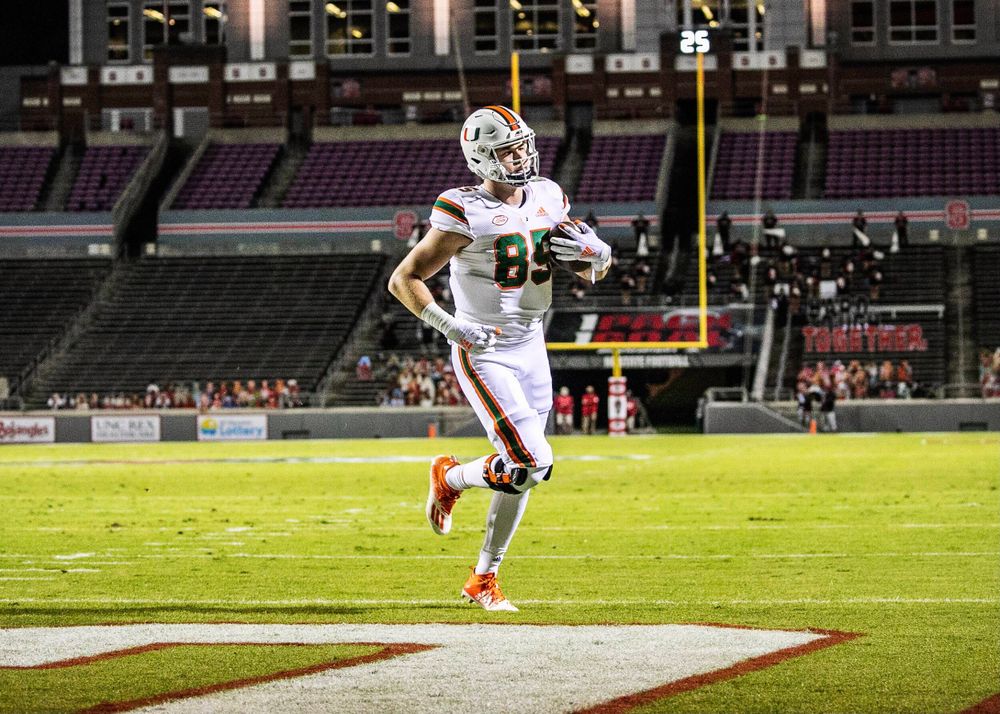 Throughout the night, Mallory was a reliable target, his catches of 26, 15 and 27 yards helping move the chains and extend drives for the Hurricanes.

And in Miami’s last three games, Mallory has 10 catches for 187 yards and three touchdowns.

“I’ve been given an opportunity to go out there and help my team and I hope that I am doing a good job at it,” Mallory said. “As long as we keep winning, as long as we keep getting those [wins] and I’m contributing to the team to help that happen, then I am happy with that.”

5. The defense delivers key stops when they were needed most

For a good part of the night, it was tough sledding for Miami’s defense, especially against Wolfpack quarterback Bailey Hockman, who was 19 of 28 for 248 yards with two touchdowns.

But in the fourth quarter, as the Hurricanes were trying to rally back, Miami’s defense held NC State to just six total yards and stopped both of the Wolfpack’s third-down conversion attempts.

And with 2:43 left and the Hurricanes holding a 3-point lead, DJ Ivey ended the Wolfpack’s final drive when he picked off Hockman and gave the Hurricanes their only takeaway of the night.

“Our mentality is always to never give up, always be tenacious and play together as a team. I think this was an incredible challenge for us as a defense to stay together,” defensive end Jaelan Phillips said. “When things kind of start to – I don’t want to say fall apart – but, when things kind of start to slip a little bit and you lose some yards and some big plays it’s easy to kind of get disbanded. But I think that we held it together really well and I am just extremely proud of our team.”

Kicker Jose Borregales has proven to be one of the most crucial additions to Miami’s roster this season, converting on all but one of his field goal attempts.

7. Jaelan Phillips is a force

Phillips has been another of Miami’s key contributors this season and Friday, he was a force against the Wolfpack.

The defensive end had a team-high 10 tackles, including a sack. He was also one of four players to break up a pass in the win. 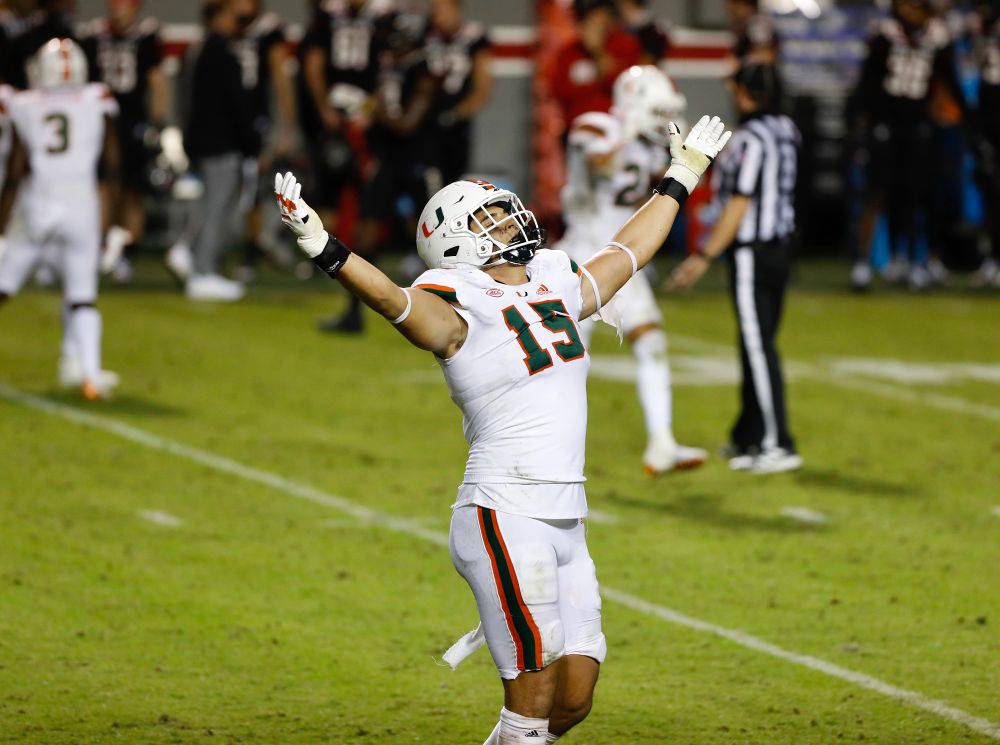 In all, Phillips led a defense that finished with six tackles for loss, two sacks and three quarterback hurries.

“You’ve got to play every play and play the next play. Things happen when they’re supposed to happen,” Phillips said. “As long as you give fanatical effort, we say [the] ball doesn’t lie.”

Throughout the season, the Hurricanes have at times, struggled with penalty issues and Friday’s game was, unfortunately, more of the same.

Miami was whistled 12 times for 101 yards and the penalties were something Diaz addressed in his post-game news conference.

There’s no doubt it’ll be addressed – again – in practice in the coming days.

“The penalties … We were just not giving ourselves the chance to win,” Diaz said.

9. The Canes stuck together

After King’s performance, after the fourth-quarter comeback, after the win was secured, to a man, the Hurricanes credited one major factor in helping make Friday’s result possible: their ability to stick together.

Through the challenges they faced in preparing for Friday’s game and after falling behind in Raleigh, there was a poise that made a difference.

“You hear coaches say these things and you hear me say it and you don’t ever know if it’s really true and it’s hard to measure, [but], we have a connected football team,” Diaz said. “We have guys that will fight for each other. We have guys that will lay it all on the line for each other because if we didn’t, we would’ve been exposed [Friday night] and we would’ve found a way to lose this football game.” 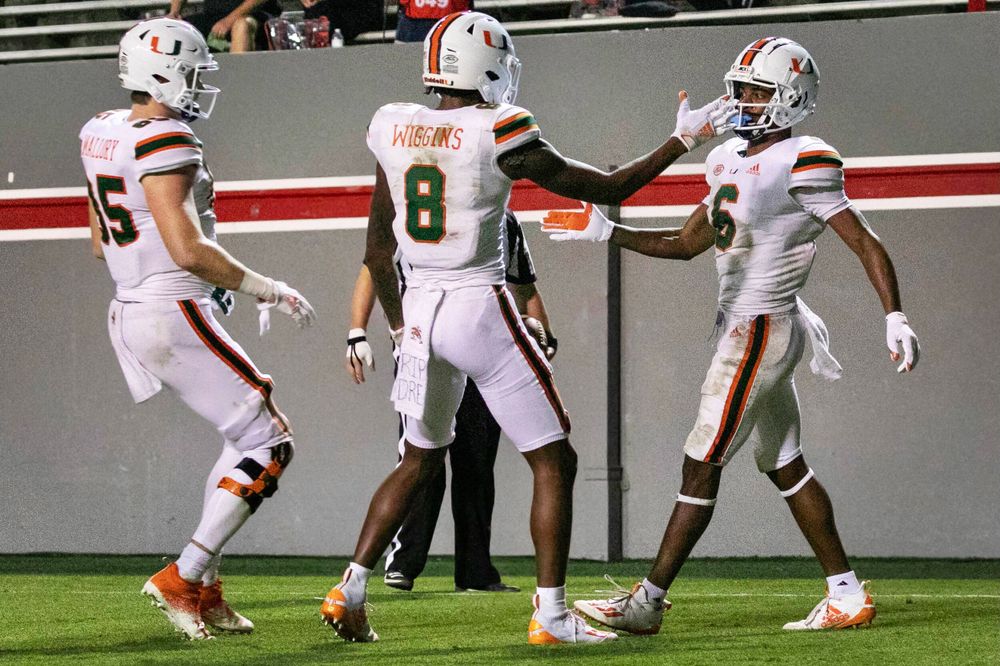 Said Frierson, “We’re going to have ups and downs during the game, but the first half is the first half. Whatever mistakes you made, whatever happened, you can’t fix it. You can only fix it by the next play, play the next play. Let’s be great as a team, let’s all work together, special teams, offense and defense. We all have to fight as one to finish this game however we have to do it. However we have to do it, let’s just get it done and leave with a win.”

If the Hurricanes want to play their way into the ACC Championship Game, they know they’re going to have to continue finding ways to win. And once again, they’ll have to do it on the road.

After escaping NC State with a win, Miami’s next test comes Saturday at Virginia Tech against a Hokies team that beat the Hurricanes 42-35 a season ago.

There is work to do, Diaz said, to make sure the Hurricanes are sharper next week in Blacksburg.

“This is our league and we’re prepared for these battles, but at the same time, we have the chance to improve,” Diaz said. “We have to improve and clean up things that were hurting our chances and we did enough to hurt ourselves [Friday night] that if we get those things corrected, that will make us more competitive, home or away, against any opponent.”