CORAL GABLES, Fla. – Back home in Kópavogur, Iceland, Gudrun Haralz was practicing with a local club team, HK/Vikingur, on a mild Fourth of July afternoon.

Looking to prevent a goal-scoring opportunity in the session’s shooting drill, the University of Miami’s then-sophomore forward planned to shield her teammate away from the net, getting in between both her and the ball.

With her colleague already in the motion of the swing, Haralz’s right leg took the brunt of the blast and she immediately knew something was wrong.

“I was in pain and had to be carried off the field,” Haralz said. “I was not sure if it was just badly swollen and only a bruise, or if it was something much more severe. After I went home, I remember not being able to stand or apply pressure [and after talking with UM athletic trainer Karl Rennalls] I knew I had to get an X-ray.” 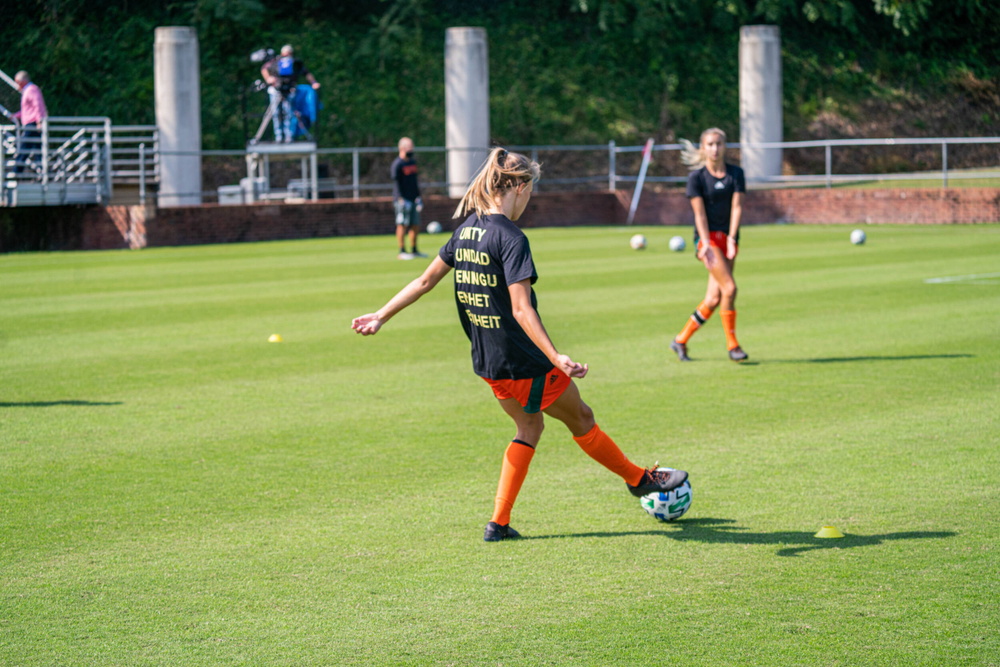 Back in Miami, Rennalls was celebrating Fourth of July with family and friends when he saw he a notification from Haralz. Quickly reaching out, he was informed of the situation and, after viewing a photo, instantly knew it was more than just a contusion like the initial doctor suggested.

“I told her she should go to the doctor immediately to get an X-ray and when the results came back it looked to be fractured,” Rennalls said. “I immediately passed the information on to Dr. [Michael] Baraga, [Miami’s orthopedic surgeon], and he wanted Guds to come back to Miami as soon as possible due to the possible need for surgery.

“After consulting with administration we decided we needed to be absolutely sure that she needed surgery in order to fly her back,” Rennalls continued. “She was then reevaluated in Iceland by a sports medicine doctor. They were to consult with Dr. Baraga, but due to technical issues I ended up holding two phones together on speakerphone to determine the level of injury Gudrun had. At that time, we decided we would wait until Gudrun was going to report for camp and have her evaluated then because they felt like the bone was properly aligned.”

Overall, it was determined that the Canes’ leading scorer in 2018, tallying 16 points, seven goals and two assists as a freshman, had fractured her right fibula and would have to begin considering a redshirt season in 2019. 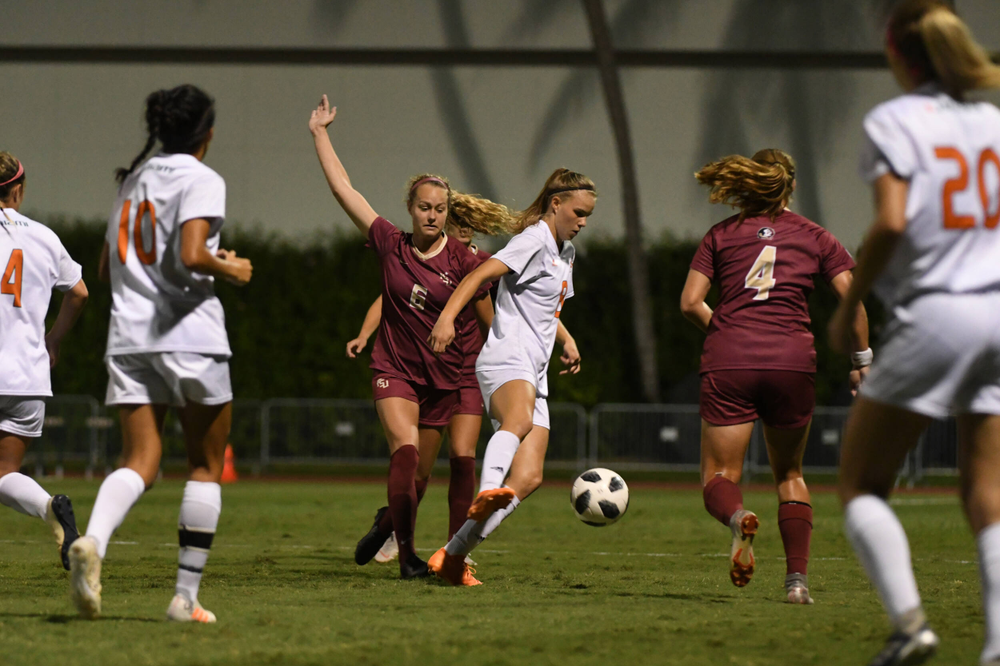 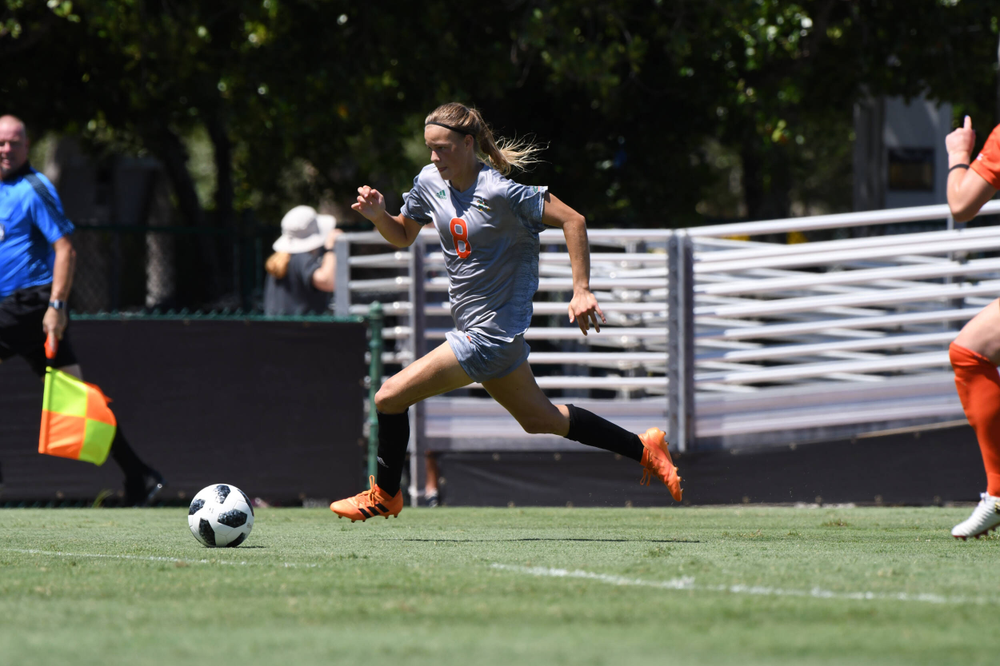 “All the time before I got my result back I had almost convinced myself that it wouldn’t come back fractured,” Haralz explained. “So, it was a bit of a shock getting the news, as that was the first time I really thought about what that actually meant for my upcoming season.

“I had a knee injury when I was in ninth grade, but it was not so serious that I needed a surgery,” Haralz added. “I was away from soccer for four months because of that and that was the first time I actually met with a physical therapist on a regular basis for rehab. Other than that, I had been pretty lucky with injuries. I had previously never fractured a bone before, so I wasn´t really sure what to expect from the recovery standpoint.”

Prior to surgery, Haralz consulted with Rennalls over the phone and he advised her on a couple training plans in order to keep up with her fitness level. He suggested swimming, as long as she made sure to not utilize her right leg in the motions.

Despite being 3,683 miles away, knowing Rennalls and Miami physical therapist Julia Rapicavoli were just a phone call away was very beneficial for Haralz while experiencing her first major injury.

“It was really hard being so far away,” Haralz said. “There was no Julia or Karl in Iceland and, in fact, the access to PTs and ATs is not as good for teams at home like it is in Miami. So, I believe I am really lucky to have them and I am really grateful for them.”

After a month of swimming and getting around on crutches, Haralz was set to return to campus and meet with Rennalls to start preparing for surgery.

“When she arrived in Miami we instantly did imaging here and determined it was necessary for her to see Dr. [Steven] Steinlauf, our foot and ankle specialist, who Dr. Baraga had been consulting with since the original injury,” Rennalls said. “At that point, we determined that it was best to perform surgery on Guds to repair and stabilize her fibula. We were concerned that she would have needed more to be done, but once the surgery was completed we were relieved to hear it was just her fibula.”

With surgery in the rearview mirror, the road to recovery officially began.

“I had never gotten a surgery before and my parents were in Iceland so they were not able to be there with me. So, it was a little scary,“ Haralz recalled. “But Karl was with me the whole time, which I appreciate a lot, and he made the experience better. After the surgery, I had to wear a boot and return to crutches for six more weeks.

“I met with Julia and Karl a lot and did strengthening workouts for my leg that did not require standing on it or pushing off of it,“ Haralz continued. “After I was able to start walking again and put weight on my leg, the real recovery started for me to gain back strength in my leg and build up my fitness again, but I lost a lot of muscle, motion and form during the 10 weeks I was on crutches.“

With the 2019 campaign set to be a redshirt season, despite being disappointed she could not help make a difference on the pitch, Haralz did not take her new supporting role lightly and wanted to continue to assist every way possible.

“It was really hard and frustrating sitting on the sideline and not participating on the field, but I was proud of my teammates and supported them as much as I could and wanted the best for them,” Haralz said. “To be honest, I was just as excited for them watching on the bench as I am when I am on the field.

“For me, watching from the sideline made me think more about the good days and have even more appreciation for the opportunities I get when I am healthy and playing,” Haralz continued. “I spent a lot of time watching film and learning from those sessions with the coaches. And because of that, I feel like that is something I do even more now than I did before, both with the coaches and by myself. It helps me visualize and learn new things, not only to watch myself, but also study other players in my position.”

As the home matches brought normalcy to her life, as she got to be around all of her teammates throughout the week, when the team hit the road she explained how not going through the process alone was very beneficial for her recovery.

In her first year with the team, current redshirt freshman midfielder Jackie Koerwitz was also recovering from a season-ending-leg-injury over the course of the 2019 season. The duo leaned heavily on each other through the process.

“Having Jackie around really helped,” Haralz said. “It made the days the team was away less lonely and we were able to watch the games and do stuff together, which was fun. It was really good to have someone else going through this with me that I could relate to. It made it easier mentally.”

“[The team being gone a lot] in itself was really hard, but it was super, super nice having Gudy around while she was also [rehabbing last season],” Koerwitz echoed. “We were able to hang out a lot on the weekends and we would try and keep it as positive as we could and watch the games online when we could.” 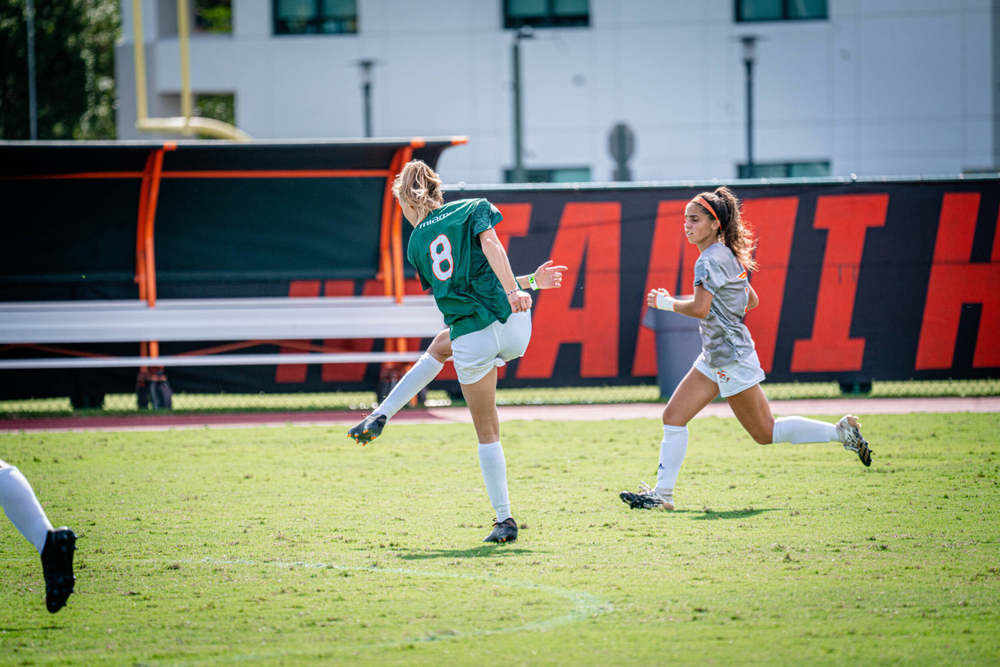 With rehab nearly behind her, Haralz returned for the spring season ready to take the pitch and get back to form. Thankful to be back on the field with her teammates in January, Haralz still understood she had work to do.

“I loved being back on the field, but the first couple practices I was definitely a bit rusty,” Haralz said. “I have high expectations for myself and easily get frustrated when I don’t perform as good as I want, so it took me a little while to understand that it was okay that I was little off at first, since I had been away for so long. My confidence was kind of low but as soon as I got more rhythm in my game and played better my confidence grew and I felt better.”

Just under two months into the spring season, play was halted due to the ongoing COVID-19 pandemic and the redshirt sophomore returned home to Iceland to continue working on her game.

Fortunate to be able to continue practice with her club team Breiðablik at times—while working through Icelandic quarantine policies—Haralz also continued to do rehab exercises she received from Rennalls, in order to continue gaining strength in her right leg.

In August, Haralz returned to campus and eagerly took the field for her first intra-squad scrimmage, in which she explained she earned the opportunity to start learning how to play with the newest Hurricanes. 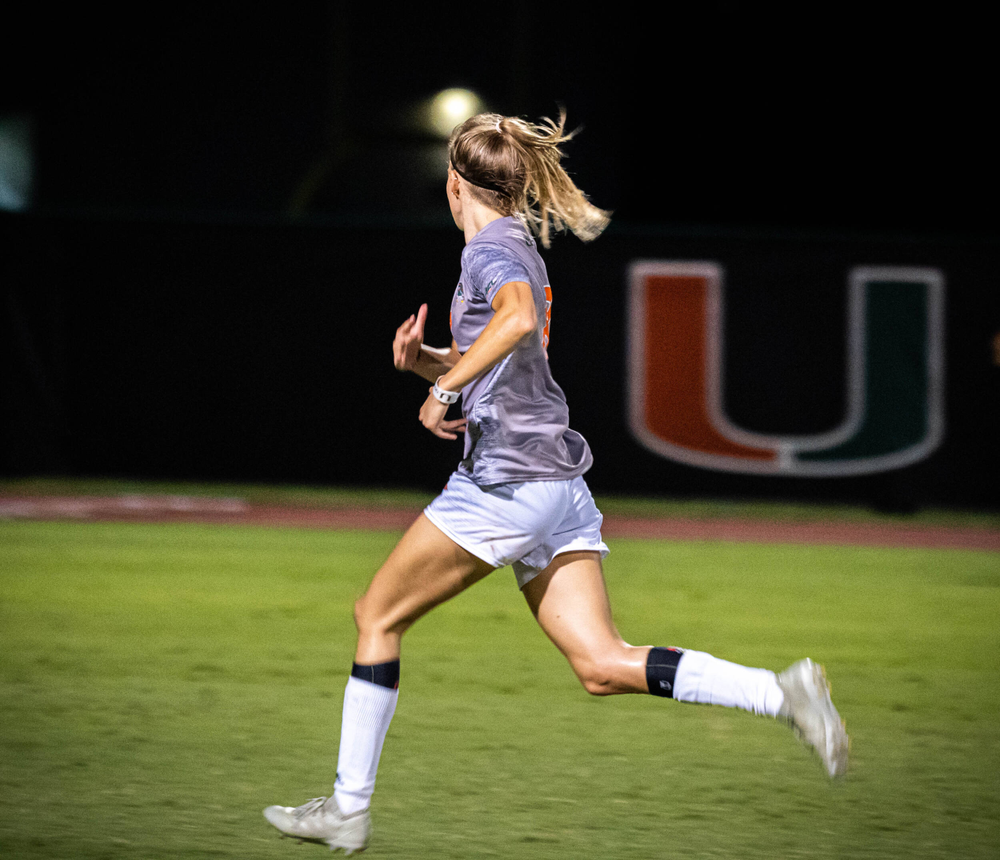 “It felt good playing the scrimmages,” Haralz said. “My confidence was good and I was able to see what I had to work on to improve myself. It was also good practicing with the team because the team is really different from my freshman year, so it takes some time learning to play with so many new players.”

Miami’s third-year head coach Sarah Barnes also saw this confidence rising in the forward and, over the course of the 2020 fall season, has continued to see Haralz making improvements every day in practice and during matches.

“Gudrun’s return to play has been a long process between the recovery, injury return to play protocol, on top of the cancellation of our spring season and multiple quarantines due to COVID,” Barnes said. “She has spent a lot of time working on the tactical side of her game to improve her decisions and timing. She has improved many aspects of her game throughout these past three months. The more time she has playing consistently, the better she is and will continue to be in the future. It was a long road back, but it’s great to have her playing again.”

For Haralz, she explained how she has worked a lot on checking off the other team’s back line to receive and secure the ball at her feet, before looking to reconnect with her teammates and help create better offensive opportunities for the Hurricanes. 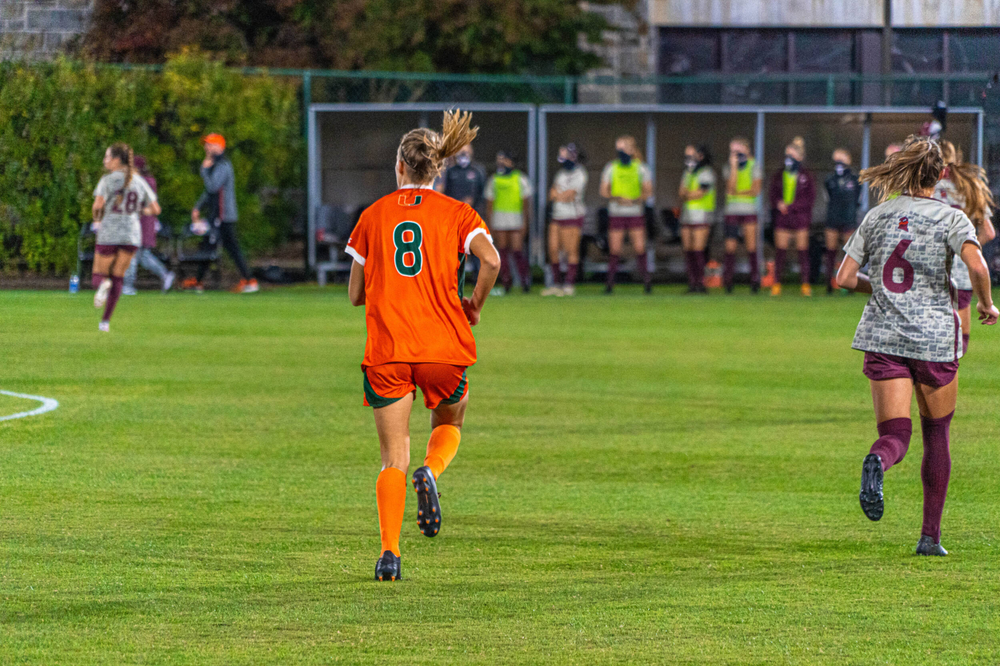 In a season that began with so many unknowns, Miami is set to close out the 2020 ACC season with a pair of matches at Cobb Stadium. The Hurricanes will first take on the Syracuse Orange Thursday at 7 p.m., before wrapping up the fall against the Duke Blue Devils Sunday at 3:30 p.m.

Despite not finding the back of the net just yet in 2020, Haralz is focused on the next task at hand as she continues to gain more and more confidence every day.

“For me, it has bothered me a lot not being able to score a goal or getting into better goal scoring opportunities,” Haralz said. “I think that is something that is frustrating for every forward because that is often your job and you can’t win a soccer game without scoring goals. But I still haven’t stopped believing in myself and the rest of the team and despite the results we have gotten this fall we are determined to keep fighting and try our best to win these two last games. Hopefully, I will also be able to score or help my teammates score goals.”