BLACKSBURG, Va. – The University of Miami women’s soccer team tallied its first goals of the season Thursday night against Virginia Tech, but it was not enough to take down the Hokies at Thompson Field.

“As a team, we struggled to defend in the first half,” Miami head coach Sarah Barnes said. “We need to be more aggressive. We have to be committed to win every ball in the box. This would’ve been an easy time to give up. I felt the team continued to battle through the second half. That is a positive we have to build on. The challenge we have to meet on Sunday is to come with confidence, to play aggressively and fight for the result.”

Virginia Tech registered the first shot of the match in the eighth minute, however junior goalkeeper Tyler Speaks was able to punch Emmalee McCarter’s shot out of harm’s way.

Off the ensuing corner, McCarter once again looked to give the Hokies the early advantage, but again Speaks was able to make the save.

In the 10th minute McCarter gave the Hokies the 1-0 lead off an assist by Sydney Ash.

Following the goal, the Hokies caught fire on the offensive end, with Emma Steigerwald, Karlie Johnson and Tori Powell each registering tallies over a five-minute span, as Virginia Tech jumped in front 4-0 with 74 minutes to play.

Following the fourth goal, freshman forward Michaela Baker looked to get the Miami attack going when she found space at the top of the box and curled a shot toward the bottom left corner. However, Alia Skinner was able to make the stop.

Skinner was once again tested in the 24th minute, as freshman forward Mia Atrio sent a low arching shot on target but was unable to sneak it past the VT goalie.

Virginia Tech added to its commanding lead at the 30:34 mark, when Emily Gray found Allyson Brown in front of goal.

After subbing in to the center back position, redshirt senior defender Lexi Castellano-Mugica walked into Miami’s 18-yard box for a corner.

On the corner, senior midfielder Michelle Giamportone sent a perfectly placed ball toward the Boca Raton, Fla., native’s head, as Castellano-Mugica buried it past Skinner for Miami’s first goal of the year.

The tally marked the third of her career, and first since notching a header against FIU on Aug. 19, 2018, following a redshirt 2019 campaign. 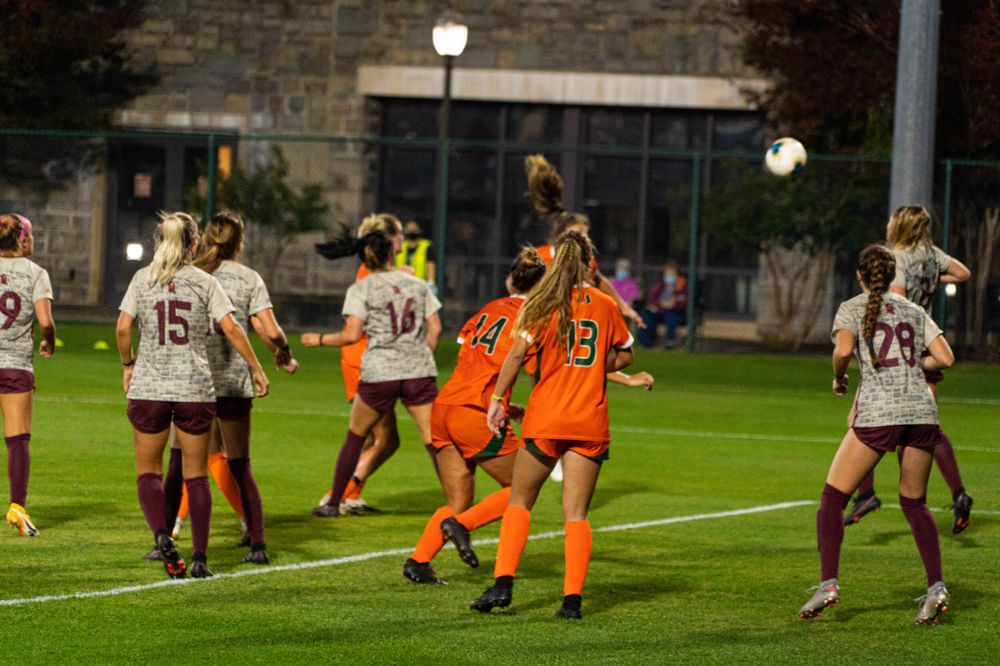 Overall, the Hokies entered the break leading 6-1, following a goal by Taylor Bryan in the 38th minute.

Coming out of the locker room, sophomore goalkeeper Melissa Dagenais made her first appearance of the 2020 campaign, and quickly registered a pair of beautiful saves in the 53rd and 54th minute.

22 minutes later, Miami once again found itself on the scoresheet when freshman forward Katalina Molina earned a breakaway off a pass from freshman midfielder Julia Edwards and faced a one-on-one with S.A. Phillips.

The Coral Gables native finessed the ball past the keeper to notch her first collegiate goal.

In the final tally of the match, Brown registered her second goal of the contest, as Virginia Tech claimed an 8-2 win.

Up next, the Hurricanes will look to bounce back when they travel to Pittsburgh, Pa., to take on the Pittsburgh Panthers Sunday at 1:30 p.m. The match will be broadcast live on ACC Network.