CORAL GABLES, Fla. – After four years as a midfielder for the University of Miami soccer team, Lauren Markwith has developed a new group of teammates and is experiencing the game of soccer in a whole new way.

Instead of competing on the pitch, Markwith has been at the forefront of a “start-up company,” getting first-hand experience on the birth of Miami’s newest professional squad, Inter Miami CF.

“I started a year and four months ago and it has been an incredible opportunity,” Markwith said. “I have learned so much. I think playing soccer at UM definitely helped me prepare for this job because at UM, soccer was my job. I learned how to handle the responsibilities of being a leader on and off the field. First, I was in video production, which I really enjoyed. It was similar to what I studied in undergrad, but then I wasn’t really sure what I was going to do once I graduated.

“Then I had the opportunity to be a part of the sport administration program to get my master’s in sports business, as well as partner with Inter Miami,” Markwith continued. “So, it is kind of like a joint workflow and school, which I thought was an incredible opportunity. I couldn’t pass this up. I love UM, I love Miami, so I was like, I am going to stay here for another year.” 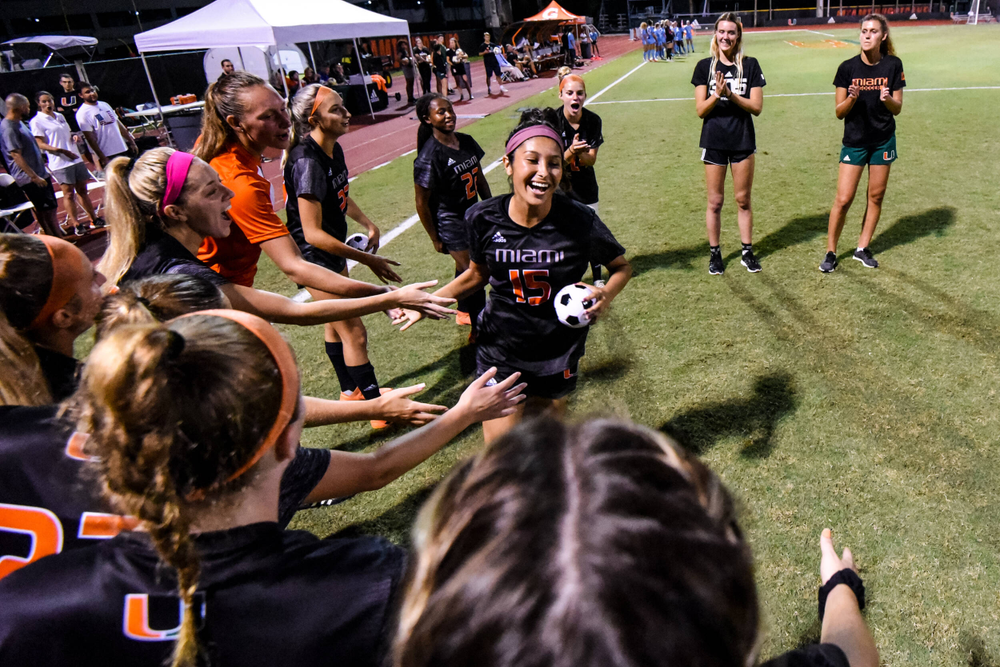 Spending multiple days a week at practice and at the stadium, she helps coordinate and produce sponsorship ads and interviews, while also prepping a new digital media show for the city’s USL team. Despite the busy schedule, her love for the sport has helped make it all worth it.

“Just being involved with soccer is incredible in itself,” Markwith said. “Obviously, I love soccer. I played soccer my whole life and I played at UM. So, still being able to be a part of the game of soccer, which I love, getting to see these top talented professional soccer players, has been incredible. For example, we just signed [Frederico] Higuaín and getting to watch him practice, getting to watch him play, just watching him up close is every soccer fan’s dream. So, I love that aspect of it.

“And also, just the opportunity to work with a quote, unquote start-up company has been incredible,” Markwith added. “Being able to be a part of this company from the very beginning, when we had no coaches, had no team, but just figuring out what it takes to run an MLS team from the ground up has been so valuable and I can’t believe I can say I was a part of that process.” 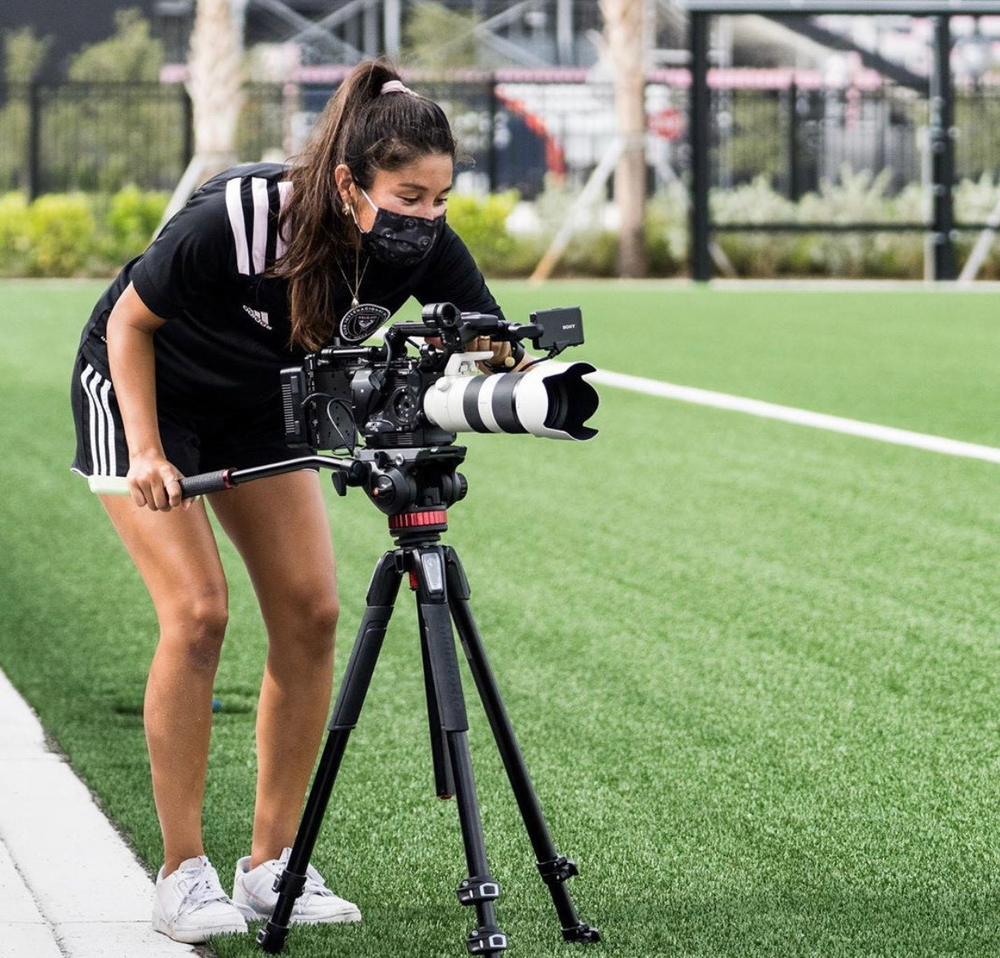 At Miami, Markwith split her time between the soccer field, the classrooms and the workplace. In the summer heading into her junior season, she gained her first media experience working as an intern for the Miami Heat. Then, during her senior season, she first started with Inter Miami as an intern before the team even had a stadium of its own. Being a student-athlete with many commitments has been essential to her success after college.

“I definitely think being a student-athlete has its advantages because you learn how to balance soccer, school and, in my case, work,” Markwith said. “So, it was definitely a struggle to balance all of those things, but you figure it out and just do it. But now that I don’t have soccer anymore, it’s just work and school, so I feel like I have so much more free time because I have learned to plan out my schedule and multi-task. So, I feel like that is something that is super, super important and definitely something being a student-athlete helped me with. And I am super grateful that I had that opportunity during college, being able to learn those super essential skills.”

Not putting her spare time to waste, Markwith was back in action for a televised ACC match on Sept. 17 when the Hurricanes hosted the Louisville Cardinals.

However, instead of sporting orange and green, Markwith grabbed a headset and gained invaluable experience as a color analyst for the match airing on ACC Network Extra. Working alongside the voice of the Miami Hurricanes, Joe Zagacki, Markwith received her first on-air experience with the network, checking off a previous dream of hers. 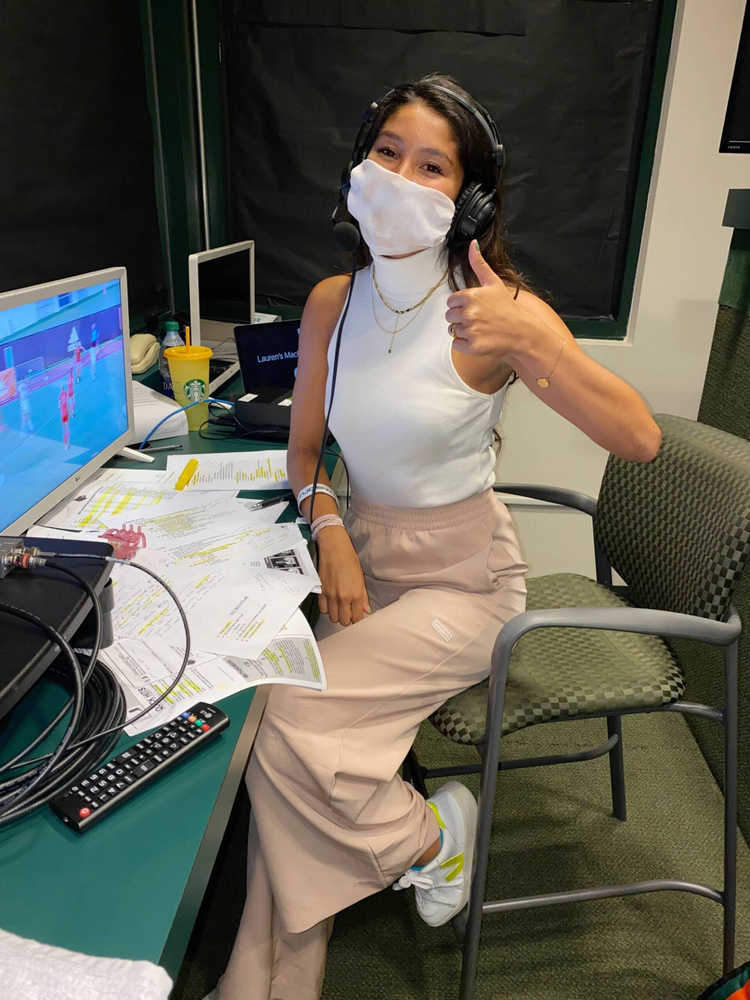 “Since high school, I have always dreamed about and wanted to be on air, in front of the camera. And obviously, that is a goal that you have to work up to,” Markwith said. “Being able to call the game for UM had definitely been a dream of mine, as I actually got to get one of my first experiences on air. And not only did I get to call the match involving the program that I played for, involving my former teammates and best friends, but I also fulfilled one of dreams. It was so much fun and an incredible experience.”

Markwith will once again have the opportunity to get a whole different perspective of UM soccer on Oct. 29 as she will once again be the color analyst when the Hurricanes take on the Syracuse Orange at Cobb Stadium.

Despite saying it is strange to not be on the field with her former teammates, her time at UM and watching film with the coaching staff after every match has been very beneficial while sitting in the broadcast booth.

“Just the fact that I have played soccer my whole life was very impactful, as well as playing the past four years at UM and understanding the structure of how both UM and ACC women’s soccer are played. Also, having the opportunity to play against Louisville during my time as a Hurricane was very beneficial,” Markwith said. “After every single game we watched film and would go over everything. [Assistant coach] Jeremy [Williams] and [head] coach [Sarah] Barnes would tell me some of the things they saw and a couple things I could look for and critique heading into the next practice or match.

“Obviously, that created a positive approach for how I called the game because, obviously, as a player, it is so easy to critique and be like, ‘You should have done this or this.’ But in the moment, you have no idea that so and so was open, so it is definitely about taking a positive approach into that,” Markwith continued. “Honestly, I also watched a lot of games that were called beforehand so I could kind of get a hang for it and see some of the things that people say. That was definitely very helpful. I also called coach Barnes, Jeremy and Louisville’s coach, [Karen Ferguson-Dayes], and they gave me the inside scoop of what I might see in the match, as well as shared some great quotes that I could use on air.” 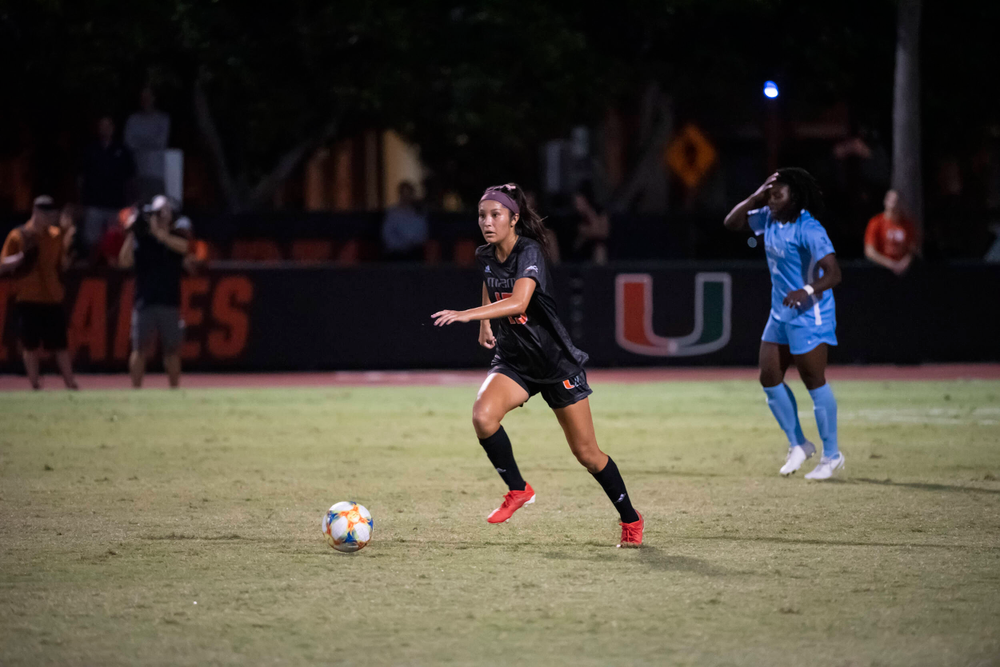 Outside of working for Miami’s newest club teams, Inter Miami CF and Fort Lauderdale CF, calling matches for ACC Network Extra and working toward a master’s degree, the former Miami midfielder is also finding time to work the sideline alongside her former classmate and teammate Dejah Cason.

“Obviously, I love soccer and I was training this 10-year-old girl prior to COVID and her mom was like, ‘Hey, do you want to coach a three-on-three tournament?’ That way the girls could get some touches on the ball and some competition, since everything had been closed down,” Markwith said. “Dejah and I happily said, ‘Yeah!’ So, we started coaching and were supposed to have a few matches, but because of COVID it has been up in the air. Sometimes cancelled, sometimes not. But we have had some practices and it has been really great to help these younger players.”

Looking back at her time in the Golden State, Markwith explained how she remembers going to college camps when she was younger and what it meant to her to learn from those older players, her role models.

“I think it is so important for girls to have these female athletes to help guide them because they know exactly what they are going through and it is something that coach Barnes and [Mary-Frances] Monroe did for me,” Markwith said. “They went through this process, they played soccer their whole lives, they played college soccer, they understand how it works. So, for me, it was really important to have a woman coach because they know exactly what we go through. So to have the opportunity to try and be that role model for this next generation is truly amazing. And obviously, I love Dejah, so it is awesome to coach with her and add to the memories we have shared. And it wasn’t something I had previously thought about, but now I am definitely interested in coaching. It is something that is definitely in the back of my mind.” 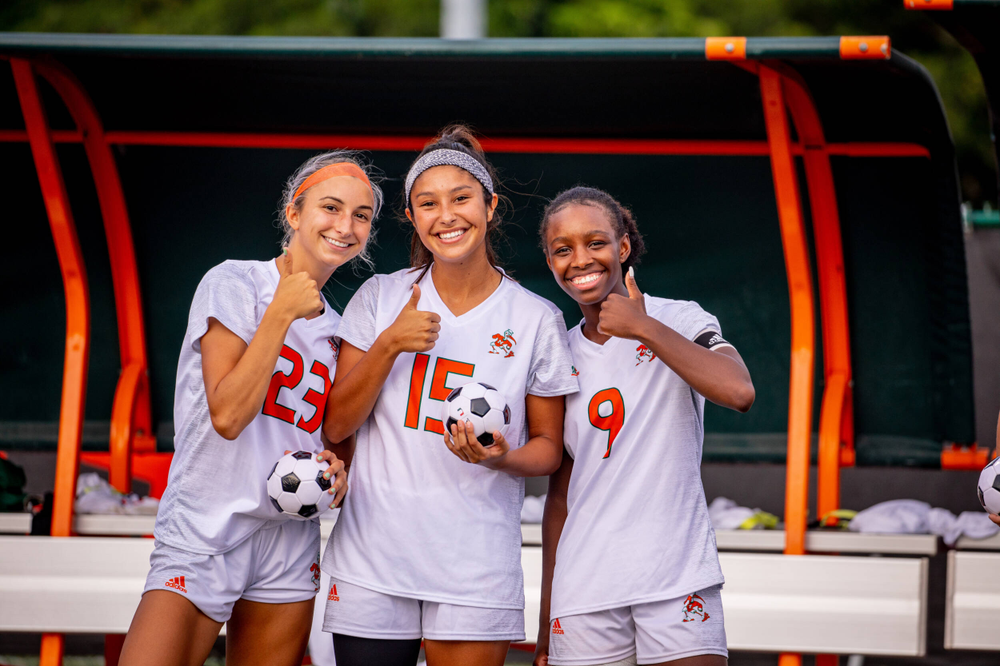 As she continues to build her resume and work toward her ambitions of being a sideline reporter for a European soccer club, Markwith is also still interested in fulfilling another lifetime dream of hers, which is to return to the pitch as a professional athlete.

Before the onset of the COVID-19 pandemic, she had plans to play with the University of East London’s team while working on her master’s abroad and try to join local club teams in England. When the pandemic delayed those plans, she altered them and enrolled at Miami once again.

“That is definitely a goal of mine. I want to play professionally for at least a year or two because I feel like it is something I definitely would regret if I didn’t at least try,” Markwith said. “And since I am getting my master’s now, I wouldn’t have to worry about school this time around, I would just be focusing on playing.

“I have talked to Grace Rapp, as she has been a great role model and mentor for me, along with being one of my best friends,” Markwith added. “I talked with her a little bit about her experience, since she is killing it in Paris. Really, I just see her, Phallon, Shannon and now Krissy crushing it, and it has been a great motivation for me, so I definitely want to give it a try once I graduate in July.”

Overall, focusing on several short-term goals to help build toward her long term objective of working as a digital host or sideline reporter abroad for a soccer club, Markwith is living in the moment, gaining invaluable experiences and is thankful for everyone who has helped her along the way. 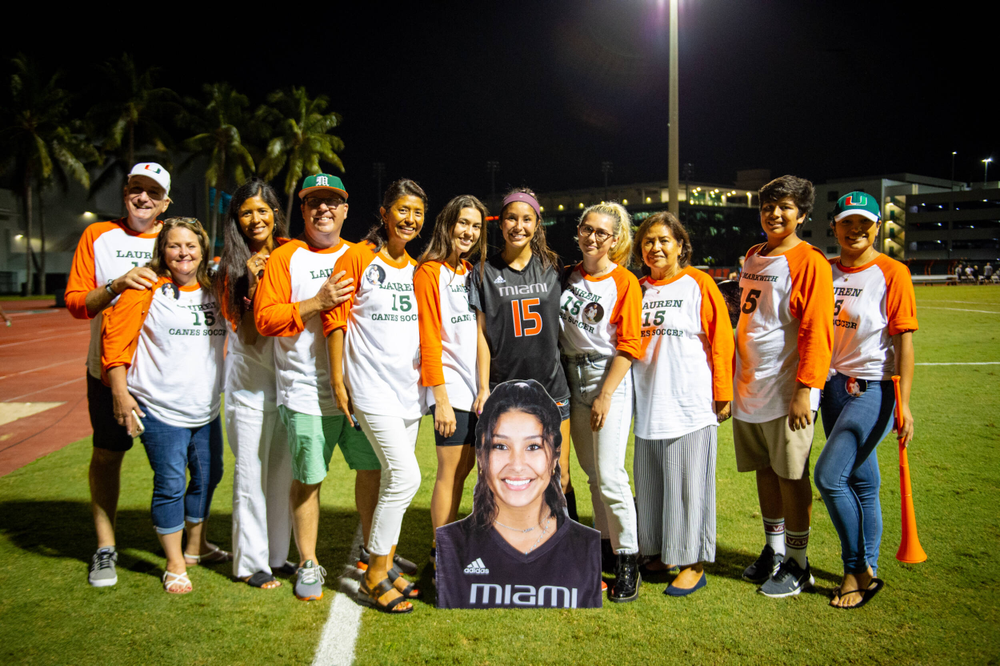