CORAL GABLES, Fla. – Bernie Kosar has taken note of his maturity and leadership.

Gino Torretta has been impressed by his knowledge of the game and his ability to effectively run Miami’s offense despite not having a traditional spring or summer in which to practice it.

And Steve Walsh has marveled – more than once – at the athleticism and skill that have helped him create plays even when it seems as if everything around him has collapsed.

D’Eriq King has played in just three games for the Miami Hurricanes. Yet his performances in those three games – all wins – have made a significant impression on some of the great signal callers who came before him at a place once widely regarded as “Quarterback U.”

And King’s start has those quarterbacks plenty excited to see what’s next.

“If you’ve followed our offense at the University of Miami over the last few years, you haven’t seen this type of continuity, consistency, and the ability to score like this,” said Kosar, who as a freshman guided the Hurricanes to their first national championship in 1983. “That’s a direct correlation to the way our quarterback, D’Eriq, is handling himself individually and as a leader.

“It’s a beautiful thing to watch.” 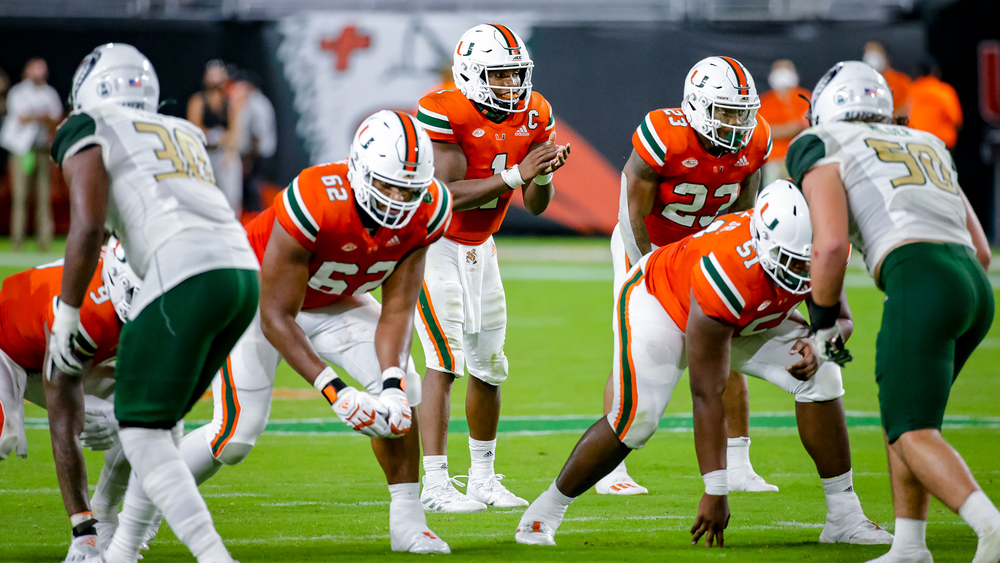 That King’s performances against UAB, Louisville and Florida State have caught the attention of some of Miami’s past greats shouldn’t be all that surprising, especially given the numbers the quarterback has posted early in the season.

The seventh-ranked Hurricanes have outscored their first three opponents 130-58 and in those games, King – a graduate transfer – has completed 67 percent of his passes, throwing for 736 yards and six touchdowns with no interceptions.

Additionally, he’s Miami’s second-leading rusher, with 157 yards and a touchdown on 28 carries.

Some of those numbers – particularly King’s completion percentage and his touchdown-to-interception ratio – are better than what more than a few of those past greats managed in their first three starts at Miami.

Vinny Testaverde, who in 1986 would become Miami’s first Heisman Trophy winner, completed 60.2 percent of his passes and threw for 846 yards, four touchdowns and six interceptions during his first three starts in 1985.

Meanwhile, Torretta – who won the Heisman Trophy in 1992 – also completed 60.2 percent of his passes in his first three starts, throwing for 915 yards, seven touchdowns and five picks in 1989.

It’s far too soon to tell if any of King’s early numbers will translate to his own history-making season at Miami, but there’s no denying the quarterback has shown he has the potential to do something special in Coral Gables.

And college football analysts have, of course, taken note.

Though this season is plenty unorthodox, King already finds himself in the center of the early Heisman conversation thanks in part to his individual game-by-game performances and Miami’s dominance in its first three wins, two of which were nationally televised prime-time matchups.

The spotlight is set to shine again on King and the Hurricanes this weekend when they travel to face top-ranked Clemson and the Tigers’ own Heisman-candidate quarterback, Trevor Lawrence.

In his first three games, Lawrence has completed 73.3 percent of his passes for 848 yards with seven touchdowns and no interceptions.

Putting together a solid showing against Lawrence and Clemson could help bolster King’s case for some of college football’s most prestigious awards, but the Miami greats who found themselves on similar stages during their careers say it’s essential King stay focused.

“My first thought with every year is that you don’t want to win the September Heisman. You want to win the one that’s given in December,” Torretta said. “Some guys can take a great September and build on that, but the games that you win a Heisman from are the games like they’ll have Oct. 10 against Clemson. You play well in that game or you play well in the conference championship game. It’s those kinds of games…it’s down the stretch, how you perform in the latter part of the year when everything is on the line.”

Added Walsh, “I think playing at Miami allows for that kind of stage. For years, they’ve been searching for that next star at Miami at the quarterback position. … But you have to build, week after week. It’ll be challenging because there are some great players that have had a great resume, including Trevor Lawrence. When you play against somebody that’s in the hunt, or maybe ahead of you, you put a good performance together head-to-head or maybe outplay them and that will get a lot of people’s attention. So, this will be a big week in a lot of respects.” 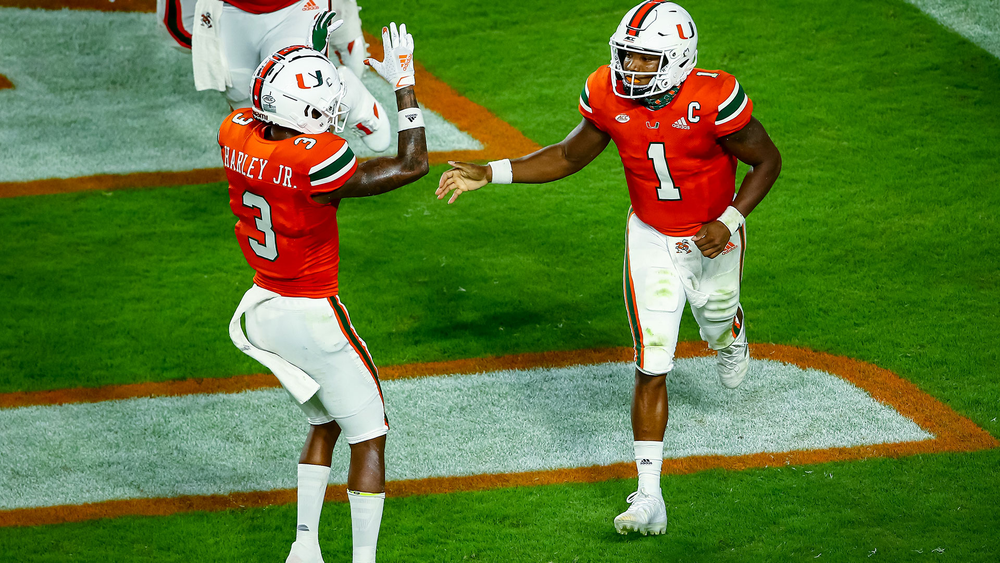 For his part, King isn’t trying to compare himself to Lawrence or anyone else. He’s not worried about individual accolades or awards, though he’s already twice been named the ACC Quarterback of the Week. And he isn’t paying much attention to the growing media spotlight.

His focus remains solely on the task at hand: finding a way to be at his best against Clemson and helping the Hurricanes remain unbeaten.

“I’ve played a lot of college football so far and I know when it’s really good, there’s a lot of highs and everybody’s talking good about you and one bad thing, it all goes downhill,” King said. “I don’t really try to pay attention to media or publicity. I think in our first three games, we got better every single week. We’re still not there yet. From Week One to Week Two, it’s always the biggest growth of the season. And from Week Two to Week Three, I think we got extremely better as well. If we keep taking steps forward, keep coming into the building every single day trying to get better and focus on the details and the small things, I think we’ve got a pretty good chance to keep growing and keep getting better. 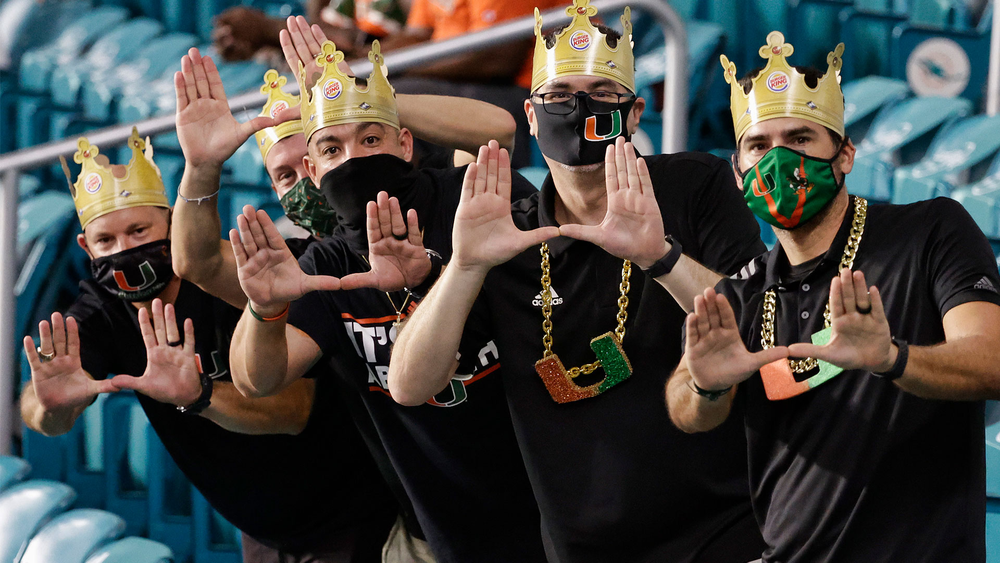 For some of Miami’s past quarterback greats, seeing and hearing King’s approach is refreshing.

They say it can make all the difference in helping him – and the Hurricanes – succeed.

And they expect they will be cheering him on the rest of the way, acknowledging that King has now become the newest “little brother” in a fraternity unlike any other.

Added Torretta, “I don’t think you can beat this place when you’re successful as a team and I know how much fun that is. That’s what I wish for all of our student-athletes, to be able to experience that success when they’re here. I know how good that feels and how great those memories are for me and my teammates. We’re rooting for him like our little brother. We’re looking out for him, we’re there for him … That’s what you feel toward the guys that play after you. They’re like your little brother and you’re rooting like heck for them to succeed and have all the success you did.”