CORAL GABLES, Fla. – It was a decision Corey Gaynor didn’t understand – or like – at the time.

After playing in 10 games as a freshman, including both the ACC Championship Game and the Orange Bowl, his coaches were asking him to take a step back and redshirt as a sophomore.

Gaynor, an offensive lineman, didn’t know what to think, especially after he’d worked his way up the depth chart to earn the first start of his college career.

“I really did get my feet wet really early and then my true sophomore year, I was told I was going to redshirt,” Gaynor said. “After playing a lot, that really does kind of mess with your head a little bit. I was told it was going to be the best thing that ever happened to me.”

He paused for a moment, recalling those tough conversations.

“Today, that is a very true statement. I’m glad I did redshirt that year. I got to take a look at myself in the mirror and really look at what I wanted to be, what I wanted this offensive line to be, how I wanted this team to be and all that type of stuff.”

Two years after that redshirt season, Gaynor has become one of the unquestioned leaders of Miami’s offense, the anchor of a line that has undergone a series of changes ahead of Thursday night’s season opener against UAB.

After playing in just four games in 2018, he was Miami’s full-time starter at center last fall and was one of the older players on a unit that, at times, featured a young group still adjusting to college football. 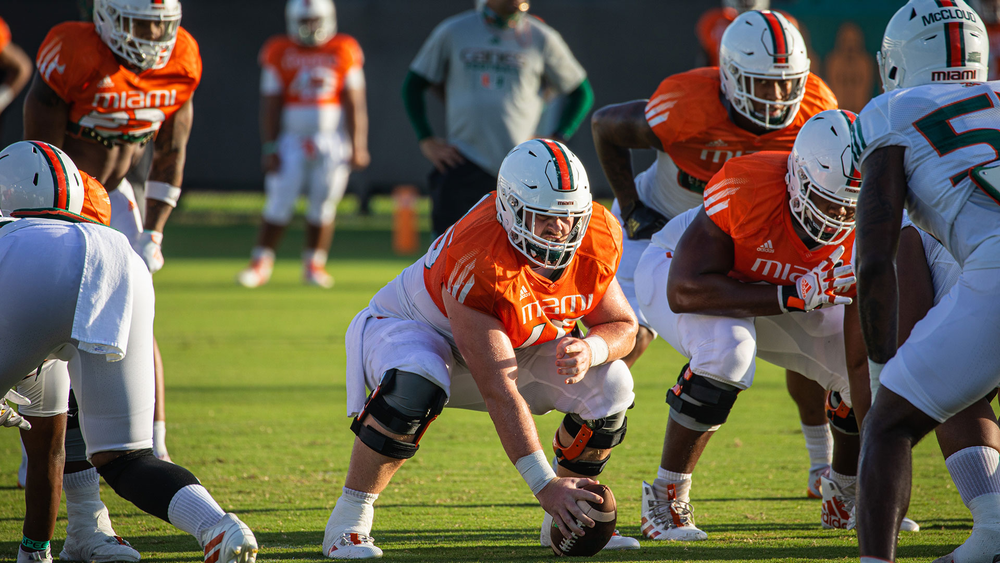 When that group endured its share of struggles, Gaynor took it personally and tried, as much as he could, to be a positive influence with his teammates. He encouraged them to keep their heads up and defended them publicly against criticism.

His work as one of the offensive line’s leaders continued during an uncertain offseason in which the Hurricanes were forced to utilize FaceTime chats and Zoom meetings to learn Miami’s new playbook after the COVID-19 pandemic canceled spring football and closed UM’s campus.

Once the Hurricanes were able to reconvene together and begin workouts, Gaynor tried to spend extra time working on his timing and building chemistry with Miami’s new quarterback, transfer D’Eriq King.

Now, he says it’s time to put all of that together – and for the line to put 2019 behind them – as a new season begins.

“I’m just super excited for all the guys in the room when all this starts clicking because of all the stuff we dealt with last year and even coming up to earlier this year,” Gaynor said. “I did take it personally and I still take it personally because people can’t always see the work that is done behind closed doors and stuff like that. They just see what they want to see. … We came back with a plan to not necessarily erase last season from our minds, but to keep it in the back of our heads as an anchor to remind us of what it’s like to not do your job well enough or to not have a great season. So it’s very personal for me. I don’t think it’ll ever not be personal for me.”

For Gaynor, having the chance to play – and lead – at Miami is the opportunity of a lifetime.

Arizona, Houston, Minnesota, Pittsburgh and West Virginia were among the schools that expressed interest. But when Miami offered him a scholarship late in the process, Gaynor jumped at the opportunity to play for a championship program not all that far from home.

He understands the legacy set by so many great linemen that played before him and he knows what the expectations are for any player that wears Miami’s orange and green.

And he’s determined to continue building on that tradition as best he can.

“It means everything to play here. I love being a Hurricane. I know my family loves coming to watch me play and all of that. It’s different when you’re playing for your hometown, your home state or you’re playing for South Florida and not just any South Florida team,” Gaynor said. “Playing at Miami holds a lot of weight and whenever I get to wear that jersey or that helmet, I know it means something. So, I’m very glad that I came here.”

"Playing at Miami holds a lot of weight and whenever I get to wear that jersey or that helmet, I know it means something."

He doesn’t want to experience another season like last year’s and he knows that, as Miami’s center, he is expected to set the tone for his group not just Thursday, but every day moving forward.

“Not only are our coaches leaders, but we also need to be a player-led organization. Guys need to hear it from other guys. Guys need to be checked by other guys. So it truly is important because one day, a guy is not going to want to bring it,” Gaynor said. “If you remind him that he’s not doing this for himself, but for a group of 70, 80 guys, you remind them not to be selfish, not to think about themselves. On those days, really, they need to think about the team. You get through days like that because of leaders.

“And I don’t really like talking about myself all that much, but, everything I’ve seen in my entire life, the centers are leaders. Jason Kelce, Alex Mack, you can go down the list and see all the NFL centers that are leaders. So, you’ve got to be a leader. You’re in the middle of the offense. You touch the ball on every play. Your voice counts when you’re talking about formation and technique.”