MIAMI GARDENS, Fla. – It was, in many ways, as good a trial run as they could have wanted.

With less than a week remaining before their Sept. 10 season opener against UAB, the Hurricanes closed out preseason camp with their third and final scrimmage on Friday – a mock game on their home field at Hard Rock Stadium.

For some of Miami’s players – including quarterback D’Eriq King – the scrimmage was their first opportunity to feel Hard Rock’s grass under their feet, to dress in their new locker room, and, though there was no crowd cheering them on, a chance to play under the bright lights that will shine on them throughout the season.

It was an experience Hurricanes head coach Manny Diaz said his team needed, especially given that Miami’s last action at Hard Rock Stadium came nearly 10 months ago when the Hurricanes closed out their 2019 home slate with a 52-27 win over Louisville.

“It felt great to be back at Hard Rock Stadium. We had some players that had never even seen Hard Rock Stadium. [Freshman quarterback] Tyler Van Dyke had never seen a stadium with grass on it. D’Eriq King was only here on his official visit,” Diaz said. “So, just to get out here and get out and play, have the scoreboards on and have some sort of game-day atmosphere, I think, was really good for our guys.”

Friday night’s scrimmage, Diaz also noted, gave the Hurricanes a chance to face off against an opponent of sorts, instead of just having Miami’s offense pitted against the defense. And as one might expect, more than a few playmakers stepped responded in a big way.

King was 24-of-34 for 330 yards and six touchdowns. He also rushed nine times for 84 yards and another score. Receiver Mark Pope, who has been playing well in camp, had four catches for 65 yards with two touchdowns, while Jeremiah Payton had three catches for 95 yards with a touchdown.

Receiver Mike Harley has made it clear: he definitely feels a sense of urgency heading into his senior season.

The Fort Lauderdale native spent his time during this spring’s shelter-in-place orders building strength and working on his speed, often waking up before dawn to train on his own. 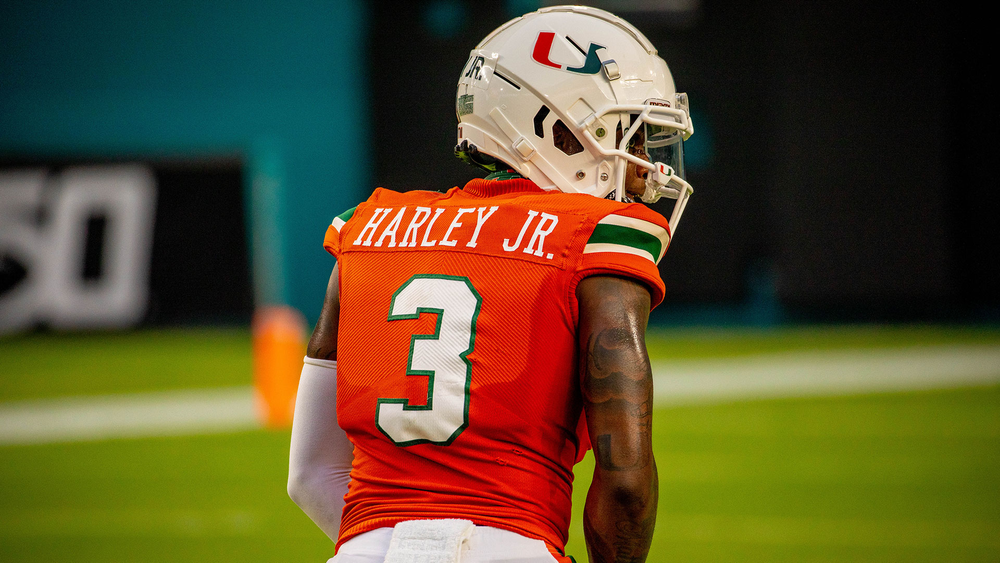 Friday night, Harley showed glimpses of how reliable a target he can be for King and how steadying a force he can be as one of Miami’s offensive veterans.

He efficiently worked the sideline on some catches, deftly got both feet in on others and bounced back from the rare drop to lead a deep receiving corps with five catches for 78 yards. His 19-yard scoring grab also gave the offense its fifth touchdown of the night.

2 – The offense was efficient – and effective

After spring practice was cut short by the COVID-19 pandemic back in March, the Hurricanes didn’t get as much time on the field as they would have liked to practice new offensive coordinator Rhett Lashlee’s scheme.

But if Friday night was any indication, Miami has made the most of its opportunities during preseason camp.

The Hurricanes scored on all but one of their possessions and showed their ability to both sustain long drives and capitalize on quick-strike opportunities.

Miami’s offense also responded to multiple situational challenges from Diaz and the coaching staff, including having to battle back from a simulated deficit. 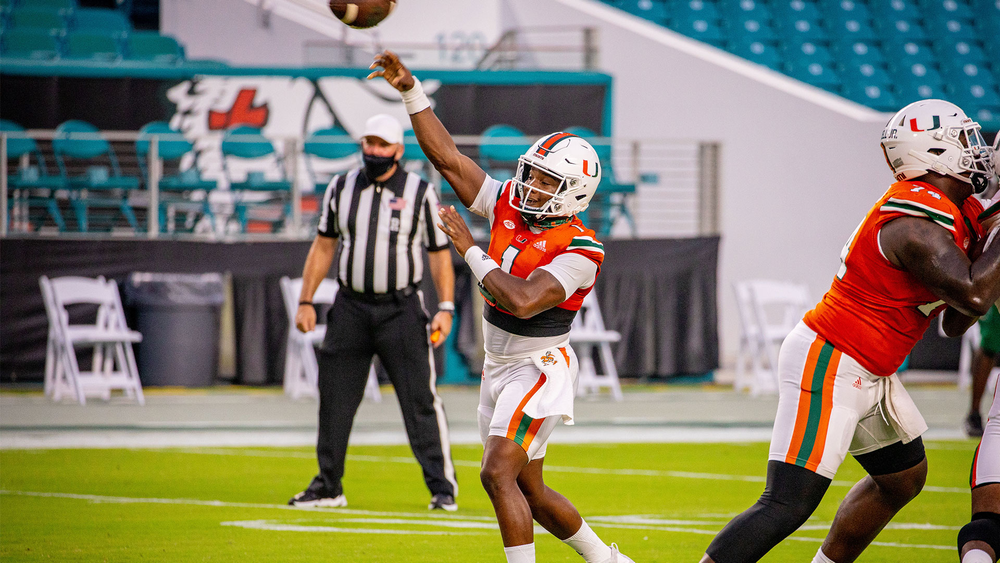 “We wanted to create a little bit of urgency, so we started down 24-0 to start the second quarter. You want to try to create [and see] will there be panic? Will there be any type of pressing and I was very pleased. We just kind of went out there and went to work,” Diaz said. “D’Eriq was very sharp, 24-for-34 for 330 [yards] and six touchdown passes and then nine rushes for 84 yards … you’re starting to see his ability, not only with his arm, but with his feet as well. Very encouraging. Like I said, I thought everybody was pretty sharp. Good tune-up to get ready for Thursday.”

3 – Special teams made some special plays

There’s no doubt expectations are high for Miami’s special teams units, especially with the addition of kicker Jose Borregales, a graduate transfer from FIU, and with the return of punter Lou Hedley.

Hedley, who last season averaged 43.9 yards per punt, booted multiple punts of 40+ yards and had a touchback on Friday. Borregales, meanwhile, connected on a 41-yard field goal and was 7 of 8 on extra-point attempts, with his lone miss coming from a distance because of penalty.

The kickers weren’t the only ones who impressed.

Pope had multiple long kickoff returns, including one that went for a touchdown. There’s no doubt the Hurricanes would like to see more of that throughout the season.

4 – The defensive line and the pass rush performed as expected

Adjusting to the loss of Greg Rousseau – last year’s ACC sack leader – will be a challenge the Miami defense has to overcome this season.

But given how the defensive front has performed in Miami’s three scrimmages, indications are the Hurricanes’ pass rush still has the potential to be among the league’s best.

Reserve quarterback Peyton Matocha led the opposing offense Friday and spent much of the evening scrambling from a series of defenders who constantly pressured him in the backfield. 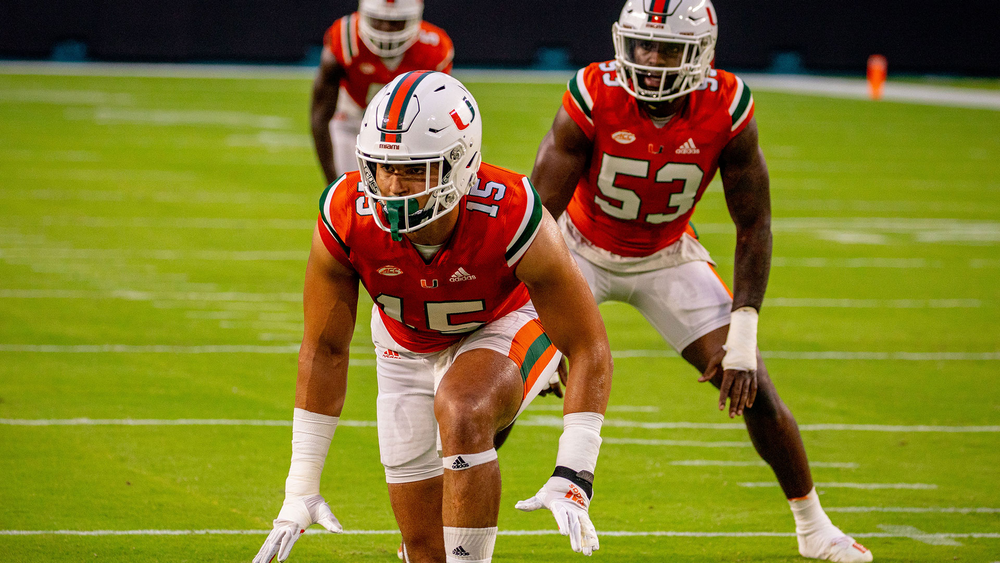 The Hurricanes defense totaled five sacks, with veteran defensive end Quincy Roche and defensive tackle Nesta “Jade” Silvera each posting sacks for the starting unit. Also getting to the quarterback were Cam Williams, Sam Brooks, and Jared Harrison-Hunte, who had a pair of sacks.

All of that, Diaz said, was encouraging, even given the mock-game setup.

“We’re going to have to have some depth as well [on the defensive line]. Even when the other guys went in, I thought we were able to be disruptive with the front, which you would expect,” Diaz said. “It was a little bit of a mismatch the way it was set up for tonight, but they still did their job and made it very difficult, not just on the running game, but for the quarterback to hold on to the football, so we were pleased with that.”

The Hurricanes left Hard Rock Stadium on Friday in a jovial mood. They had played well. They’d had the opportunity to play, period, something that can’t be taken for granted these days.

But players and coaches know that now, things are about to get serious. Quickly.

When Miami lines up against UAB on Thursday, it will face an opponent who has already played a game, with the Blazers notching a 45-35 win over Central Arkansas this past Thursday.

In the coming days, the Hurricanes will settle any remaining position battles and settle on a depth chart. They’ll go through the traditional pre-game preparations and game-week routine.

And come Thursday, they’ll open a new season, one that will look different because of the coronavirus pandemic. 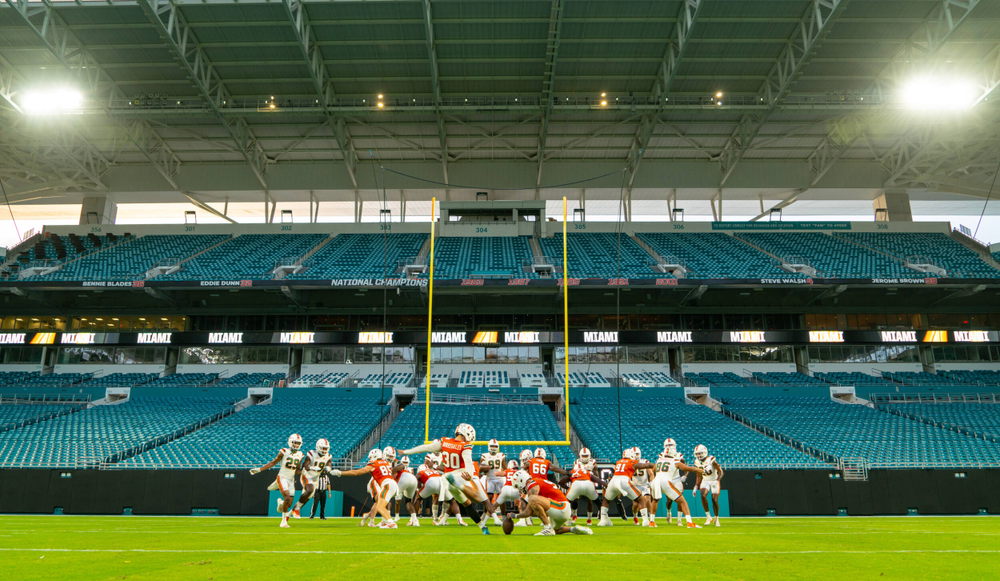 Along with running their offense and making plays on defense during Friday’s scrimmage, the Hurricanes got their first taste of what it will like to play at Hard Rock while trying to prevent the spread of coronavirus.

They wore masks when not on the field. They had an expanded sideline to allow for social distancing. They sat on individual chairs, not benches. And they dressed in a locker room retrofitted to help them adhere to safety protocols.

Now, they have a better idea of how different things will look for this particular season opener and it’s officially time to focus on UAB.

“You still see a very, very good defensive football team in UAB. An outstanding rushing attack. Very balanced. Multiple guys going in there and running for big yards and you still see [Austin] Watkins as their leading receiver,” Diaz said. “The tight ends were dynamic [against Central Arkansas], especially in the red zone. So, a very experienced team who’s been in games…the moment will not be too big to them and we know we’ll have to play our best to beat them.”