Canes Get to Work at Hard Rock

MIAMI GARDENS, Fla. — Less than a week until their season opener, the Miami Hurricanes were back under the bright lights of Hard Rock Stadium for the first time in nearly 10 months.

The Canes held their third scrimmage of the preseason Friday night, a mock game that was a final tune-up before hosting UAB on Thursday. Head coach Manny Diaz was pleased with how the scrimmage went, but felt it was most important to just get back into the Hurricanes’ gameday routine.

“It felt great to be back at Hard Rock Stadium. We had some players that never even seen Hard Rock Stadium,” Diaz said. “Tyler Van Dyke has never seen a stadium with grass on it. D’Eriq King was only here on his official visit so, just to get out here and get out and play and have the scoreboards on and just have some sort of gameday atmosphere I think was really good for our guys.”

The game day vibes were flowing, as crowd noise blared over the speakers and music played between downs to simulate a true game-like atmosphere. After using an offense vs. defense format for the first two scrimmages, the Hurricanes faced off against an “opponent” and had to adjust to the typical game procedures.

“We put Miami on one sideline and had some other guys that are simulating UAB on the other sidelines, so you’ve got your kicking substitutions and mechanically I thought we were sound in terms of having the right guys on the field and procedurally,” Diaz said. “That was positive because with UAB playing a game ahead of us, they were able to work some of those things out. We’ve got to be ready to go on Thursday.”

Miami’s coaches made things interesting for their players on Friday, putting the Canes against a big deficit to see how they would respond and they rose to the challenge.

“We wanted to create a bit of urgency, so we started down 24 to nothing at the start of the second quarter because you want to try to create will there be panic, will there be any type of pressing and I was very pleased,” Diaz said. “We went out there and went to work. D’Eriq was very sharp, 24 for 34 for 330 yards and six touchdown passes and then nine rushes for 94 yards. You’re starting to see his ability, not only with his arm but with his feet, as well, so very encouraging. I thought everybody was pretty sharp; good tune-up to get ready for Thursday.”

“That’s the whole key. You’ve got to finish drives and I thought our execution, we did a bunch of different things down there and I thought we were crisp,” Diaz said. “No assignment issues and everyone seemed to know what to do and do it at a high level.”

“You've got to finish drives and I thought our execution, we did a bunch of different things down there and I thought we were crisp.”

Defensively, the front four of Jaelan Phillips, Jonathan Ford, Nesta Jade Silvera and Quincy Roche led the Hurricanes in a steady disruption of the opponent’s backfield. While Silvera and Roche each had sacks, Cam Williams and Sam Brooks also each got to the quarterback once and Jared Harrison-Hunte added a pair of sacks to show the Canes have a lot of talent on the D-line.

“We’re going to have to have some depth as well, so even when the other guys went in I thought we were able to be disruptive with the front like what you would expect,” Diaz said. “It was a little bit of a mismatch the way was set up for tonight, but they still did their job and made it very difficult, not just on the running game but for the quarterback to hold on the football so we were pleased with that.”

With Miami getting its final preparations done for Thursday’s season opener, they have some tape to study of its opponent. UAB beat Central Arkansas, 45-35, on Thursday night, but Diaz knows that margin of victory does not accurately illustrate how good UAB is.

“The score was very misleading,” Diaz said. “The strength of UAB’s team is their defense and Central Arkansas has got a four-yard touchdown drive, 15-yard touchdown drive, they score on defense, they scored twice against the backups in the fourth. You still see a very, very good defensive football team in UAB, an outstanding rushing attack, very balanced, multiple guys going in there and running for big yards, and you still see Watkins as their leading receiver and the tight ends were dynamic — especially in the red zone. They’re a very experienced team who’s been in games. The moment will not be too big to them and we know we’ll have to play our best to beat them.” 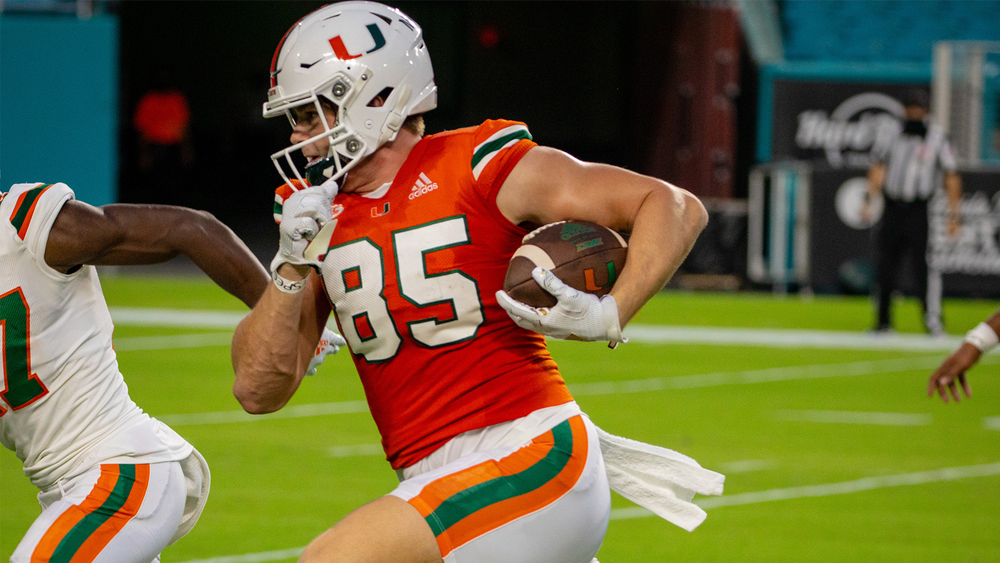