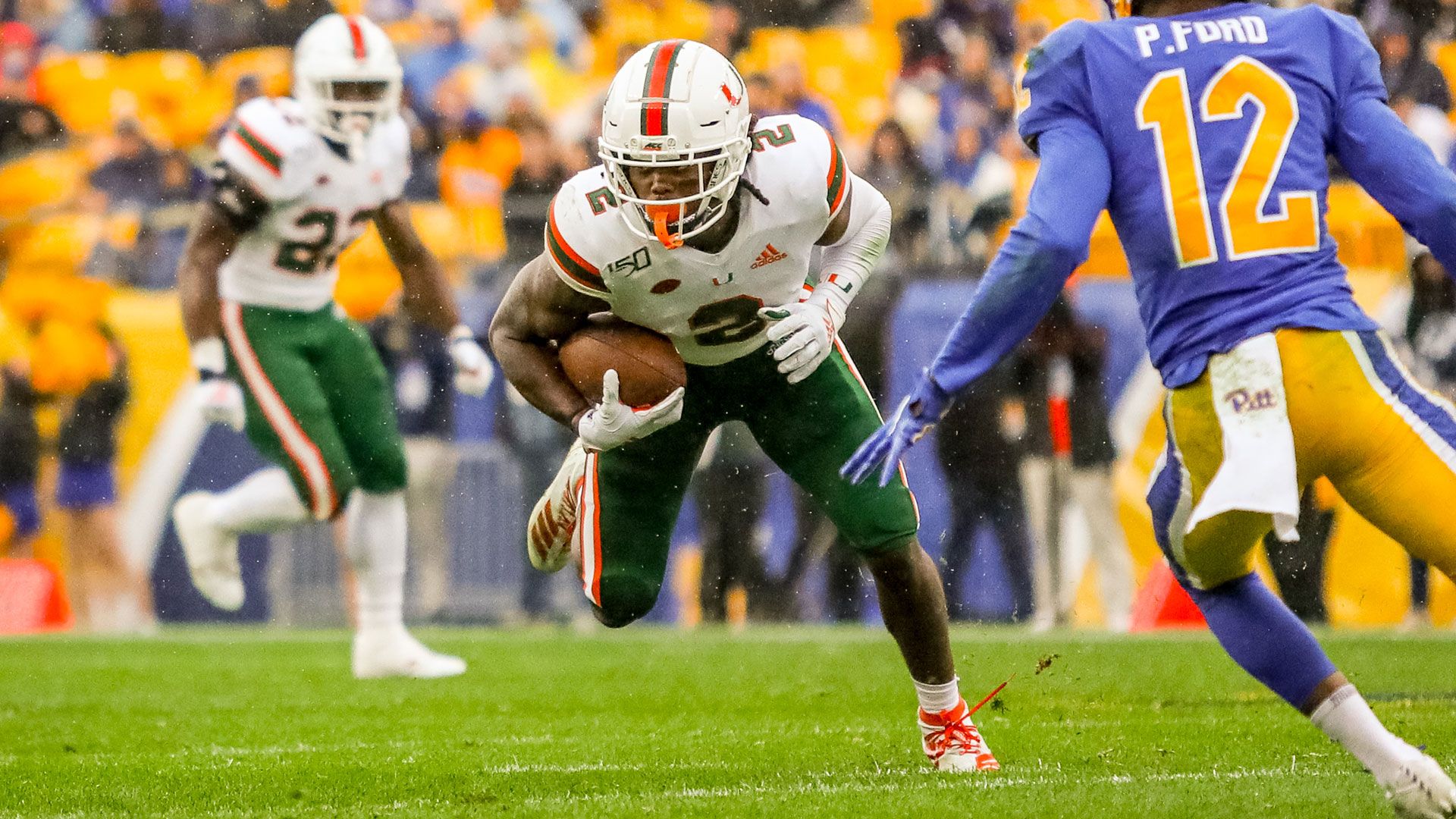 PITTSBURGH – It was another crazy Saturday filled with highs and lows for the Miami Hurricanes, but the resilient Canes battled to a 16-12 upset victory at Pitt.

The Canes (4-4, 2-3 ACC) kept the Panthers (5-3 2-2 ACC) out of the end zone and forced three turnovers on the afternoon, but Miami’s offense was held to just 208 total yards by a stingy Pitt defense inside Heinz Field. Despite the uneven offensive showing by Miami, the Hurricanes stepped up in crunch time to earn a big road win.

“Extraordinarily proud of the staff and players,” head coach Manny Diaz said. “It’s another week in the ACC Coastal. I really have a lot of respect for Pitt’s defense. I think that they showed today that they are really good on defense. They are really hard to move the ball against. It’s a game where you have to make tough blocks, tough throws and tough catches. We struggled with that for a large part of the game, but again, very similar to the Virginia game, because of the outstanding red zone defense – keeping the score down and keeping Pitt out of our end zone – ultimately gave us a chance to put together one drive at the end of the game for the win. That is three straight games that our offense has had success moving the ball downfield in the fourth quarter in game-winning time. It was great to see us rewarded in that. It’s a league of very fine margins and today we were the team that made the plays in the critical situations. I couldn’t be more proud.”

After leading for most of the game, the Hurricanes faced a 12-10 deficit with 4:01 remaining in the game. Jarren Williams, who finished 4-for-8 for 50 yards and a touchdown after entering the game for Miami’s first drive of the fourth quarter in place of starter N’Kosi Perry, led the Canes on 62-yard scoring drive that ended in a 32-yard go-ahead touchdown to K.J. Osborn after the redshirt senior wideout bounced off a big hit to break a tackle and sprint into the end zone to put Miami ahead for good.

Miami went for two after the Osborn touchdown, but could not convert. The nine-play drive shaved 3:03 off the clock and the Canes had the lead for the second time, 16-12, with 58 seconds on the clock.

“It feels so good to win,” Osborn said. “We got one on the road. We just stayed together in that locker room. It was just us on the road and we pulled it out.”

Pitt’s final chance lasted just four downs, with Gregory Rousseau getting his third sack of the game and putting the Panthers 80 yards away from the goal line with just 39 seconds remaining in the game. One play later, Kenny Pickett’s pass fell incomplete and Miami took three knees to wrap up its first road win of the 2019 season.

“He’s a tough dude,” Rousseau said of Pickett. “He’s really elusive. You would think he’s like a regular pocket passer, but he’s actually really fast and was getting out of there. I think we did a great job of crowding him and getting after him all game.”

Saturday’s game proved to be a battle from the start and Pitt showed it came ready to play on the opening drive of the game, converting a third-and-5 on a wheel route from Pickett to V’Lique Carter for a 30-yard gain to keep their drive alive. The Panthers reached the Miami 33 before the Canes’ defense pushed back and held them to a 54-yard field goal by Alex Kessman that gave Pitt an early 3-0 lead.

The Canes’ defense made a big play on Pitt’s next drive, as senior linebacker Zach McCloud deflected a Pickett pass and the tipped ball landed in the arms of a diving DJ Ivey for the sophomore’s first career interception. The pick gave Miami possession on the Pitt 26 and earned Ivey the first Turnover Chain of his career.

McCloud, who hopes to redshirt and return to play for the Hurricanes in 2020, stepped up big when his team needed him most. The senior, who finished with third on the team with five tackles and added half a TFL and a pass breakup, started at WILL linebacker in place of injured senior Michael Pinckney on Saturday and was thrilled to be back competing with his fellow Hurricanes.

“Emotionally, it was a tough decision to make to not finish out the season with the team,” McCloud said. “When I got the chance today to be able to go out on the field and just play my heart out for them was one of the most fulfilling experiences of my life.”

Miami took advantage of the short field, driving to the Pitt 3 before tying the score on a 22-yard field goal by Camden Price.

On the next Pitt possession, the Hurricanes forced their second turnover of the game. Bubba Bolden stripped Pitt wideout Taysir Mack and safety Gurvan Hall scooped up the fumble to give Miami possession on its own 38 with 1:18 remaining in the first quarter.

The Hurricanes’ defense made some more noise early in the second quarter, as Ivey intercepted an overthrown Pickett pass deep over the middle and returned the pick 28 yards to the Pitt 17.

“Number one, great for D.J. but great for everyone on the defense,” Diaz said. “We felt like we had obviously been in a little bit of a barren patch with turnovers, but we also know that those things tend to come if you stay after it and stay resilient. I thought that we did a good job in the first half of eliminating the run and harassing the quarterback into making mistakes. They came back in the second half with some different offensive things that we had not seen. In the second half, we were trying to get it fixed on the sideline with some extra offensive linemen and different things. Credit to our guys that they drove down the field, including getting it to the one yard line, but we still refused to let them into our end zone and gave us a chance to win.”

Miami made the most of the turnover, as Cam’Ron Harris finished off the four-play scoring drive with a one-yard rushing touchdown that gave the Hurricanes their first lead of the day, 10-3.

“We always felt like we had two really talented running backs,” Diaz said. “It’s tough sledding, running against that defense. That’s the way that they are built and the way that they are designed. What I loved about Cam’s running today was that there were no lost yardage plays. Sixty yards on 16 carries – doesn’t seem amazing but 3.8, that’s what they were averaging giving up prior to this game, so it was a win. It’s better than what they were allowing. The way that he stuck his head down and ran north to south – obviously had that big run on that last drive, which was vital.”

A pair of big runs helped Pitt get deep in Miami territory late in the second quarter. Todd Sibley opened their final drive of the opening half with a 33-yard run and Pickett later broke free for a 30-yard gain on the ground. The Panthers reached the Miami 7, but the Hurricanes’ defense held Pitt to a 25-yard field goal by Kessman that cut into Miami’s lead, 10-6.

The Canes received the opening kick in the second half, but did not retain possession for long. On the third play of the half, Perry overthrew Mike Harley and was intercepted by Pitt’s Damarri Mathis.

Harley was flagged for a facemask on the tackle adding 15 yards to the return to give the Panthers possession on the Miami 17. But Miami’s defense responded to the sudden change, holding Pitt to a 29-yard field goal by Kessman that cut the Hurricanes lead to one, 10-9.

Miami drove into Pitt territory late in the third quarter, reaching the Panthers’ 25. But head coach Manny Diaz elected to go for it on fourth-and-3 instead of attempt a 42-yard field goal and the Canes could not convert. Pitt took over possession on downs at its own 25 and Miami remained ahead, 10-9, with 3:45 left in the third quarter.

The Hurricanes’ defense forced a crucial three-and-out, quelling any momentum Pitt may have gained after its fourth down stop, but could not get in a rhythm offensively on the ensuing possession.

Pitt’s offense put together its most impressive drive of the game to open the fourth quarter, milking 8:14 off the clock in a 14-play scoring drive that ended in a 29-yard field goal by Kessman that put the Panthers back on top, 12-10, with 7:19 remaining in the game.

“It’s our second time where an opponent hasn’t scored [a touchdown] on us,” Ivey said. “We pride ourselves of that on defense. Making sure no one scores [touchdowns] on us is big, very big.”

Williams replaced Perry at quarterback with the Canes looking for a spark offensively, but the Hurricanes went three-and-out and Pitt took over possession on its own 24 after Miami’s seventh punt of the game.

“It was no reason other than the fact that we felt like we needed a spark,” Diaz said. “Obviously, we knew at that point that we were going to have to throw the football to have a chance to win this game. I don’t think that it was necessarily anything specific that N’Kosi wasn’t doing, but we were just stuck in the mud throughout the entire third quarter. It was just time to give Jarren a shot and see if he could get something to spark and get something going.”

Again, Miami’s defense answered the call and forced a three-and-out. The Hurricanes opened their final drive on their own 38 with 4:01 remaining in the game and Williams and his teammates engineered their game-winning drive.

“Jarren played great,” Osborn said. “When his number was called, he made plays. That’s all he can do. Control what he can control.”