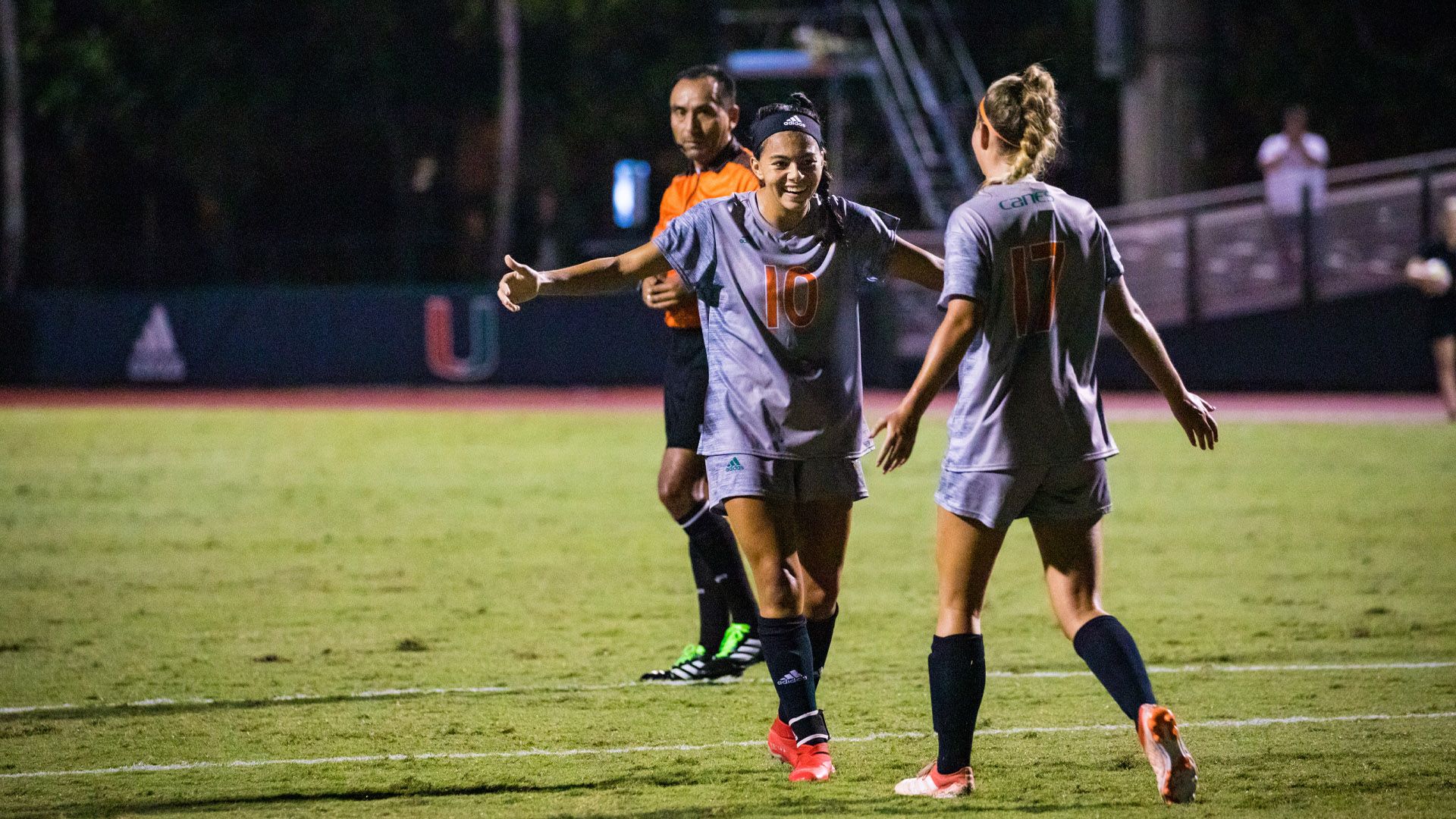 SYRACUSE, N.Y.  – Piling on the attacking pressure in the second half, the University of Miami soccer team walked away with its first ACC victory of the season, topping Syracuse, 2-1, Sunday afternoon at the Syracuse Soccer Stadium.

“As I have said before, every match in the ACC is a tough one. There is no easy match and we have talked about that all season long,” Miami head coach Sarah Barnes said. “Obviously, Cuse was coming off a win against Wake Forest and were playing on its home field, so to be able to come away and perform both from an execution standpoint and a physical standpoint was great. And also, just the grittiness, the toughness and honestly just the stubborn competitiveness that we showed out here today, was also great to see.

“We have been grinding all year, but it just feels so much better when the result goes your way. We haven’t always gotten that, but the team has definitely deserved it,” Barnes said. “So, I am proud of them today and happy we can enjoy this and have some momentum going into Florida State.”

Striking first, senior forward Kristina Fisher connected with junior forward Tia Dupont in front of goal, who buried it home for her third goal and team-leading 11th point of the season.

Following the 15 minute pause in action, Miami quickly turned on the pressure toward the Cuse goal.

In the 50th minute, junior midfielder Michelle Giamportone found senior defender Dejah Cason in space, who sent a pass towards Dupont. The junior then sent a cross towards the head of senior defender Bayleigh Chaviers, but Syracuse goalkeeper Lysianne Prouix was able to high-point the ball.

In the 63rd minute, Chaviers sent a through ball to freshman forward Maria Jakobsdottir, who made a move past Prouix, however the shot missed just wide of the net.

20 minutes later, senior midfielder Lauren Markwith sent a beautiful through ball to Fisher, who got a shot off but her attempt was blocked by Prouix. On the follow up, Giamportone got a header, but the ball bounced off the crossbar. With the third time being the charm, Chaviers headed it in for a 2-1 Miami lead.

The goal marked the third of the season for Chaviers, who started the match at center forward.

Miami will return to action on Friday when they take on fifth-ranked Florida State at 5 p.m. in Tallahassee, Fla. The match will be broadcast live on RSN.