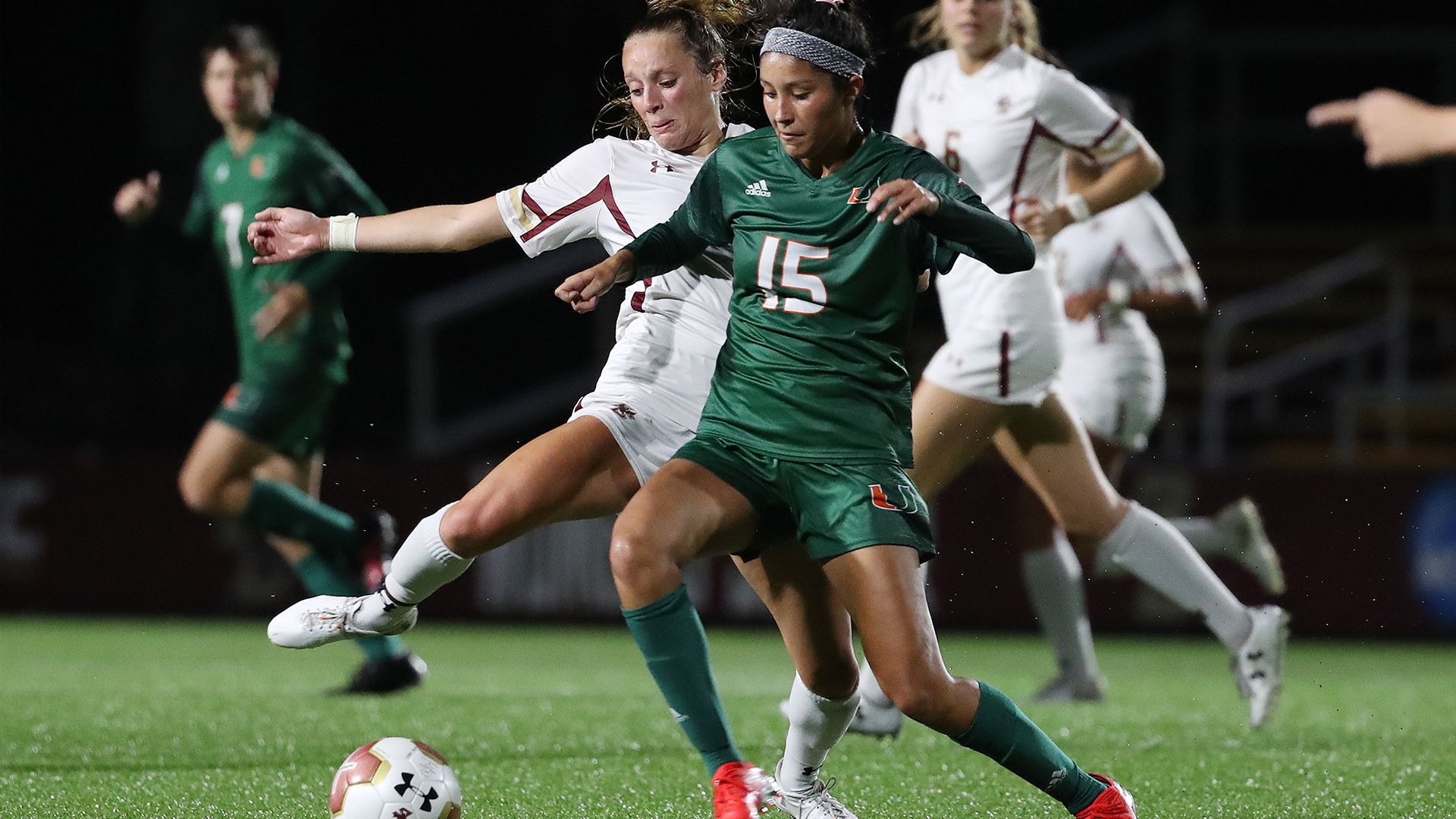 Miami Drops Road Contest with BC, 4-0

CHESTNUT HILL, Mass. – An early goal makes the difference as the University of Miami drops its road contest against Boston College Thursday night at the Newport Campus Lacrosse and Soccer Field, 4-0.

“Lately, we’ve had a problem giving up goals early,” Miami head coach Sarah Barnes said. “There wasn’t a lack of effort, but our decisions and composure with the ball need to be better.

“We’ll look at the video and work hard to improve. I don’t think that was a 4-0 game, but they punished our mistakes,” Barnes continued. “We did advance the ball into some dangerous spots in their half, but our control, precision, and willingness to take risks needs to be better in the final third to be effective. It’s a setback and I know the team is frustrated by the result, but we’ll regroup and prepare for Sunday’s game.”

Just 60 seconds into the contest, freshman goalkeeper Melissa Dagenais left the goal line looking to make the play on the ball. However, the Eagles attacker was able to sneak the ball past before getting taken out in the box to set up a penalty kick opportunity.

Following the goal, the Hurricanes looked to even the match over the next 44 minutes, but were unable to find the back of the net.

In the 19th minute, Alexa Ferreira recorded the Hurricanes first shot on goal, however Allie Auger was able to make the stop for the Eagles.

In the 31st minute, Olivia Vaughn placed a shot on target that rolled inches from the goal line, before sophomore defender Sierra Frey made a last ditch effort to clear the ball out of harm’s way and collect a team save for the Hurricanes.

At the break, the Eagles held a 1-0 advantage on the Hurricanes (3-4-1, 0-2-0 ACC), as Dagenais notched two saves in just her second career start and first in conference play.

At the 46:07 mark, the Eagles doubled their lead when Olivia Vaughn found the back of the net off an assist from Samantha and Michela Agresti.

In the 54th minute, senior defender Bayleigh Chaviers looked to place Miami on the board, but her shot just missed high of the cross bar.

Three minutes later, Vaughn found the back of the net again for the Eagles, who jumped in front 3-0.

The Eagles fourth and final tally of the night came in the 76th minute, off the head of Sam Smith.

The Hurricanes return to action for a trio of home contests, beginning with an ACC match on Sunday at 7 p.m. against Pittsburgh. The match will be broadcast live on the ACC Network.