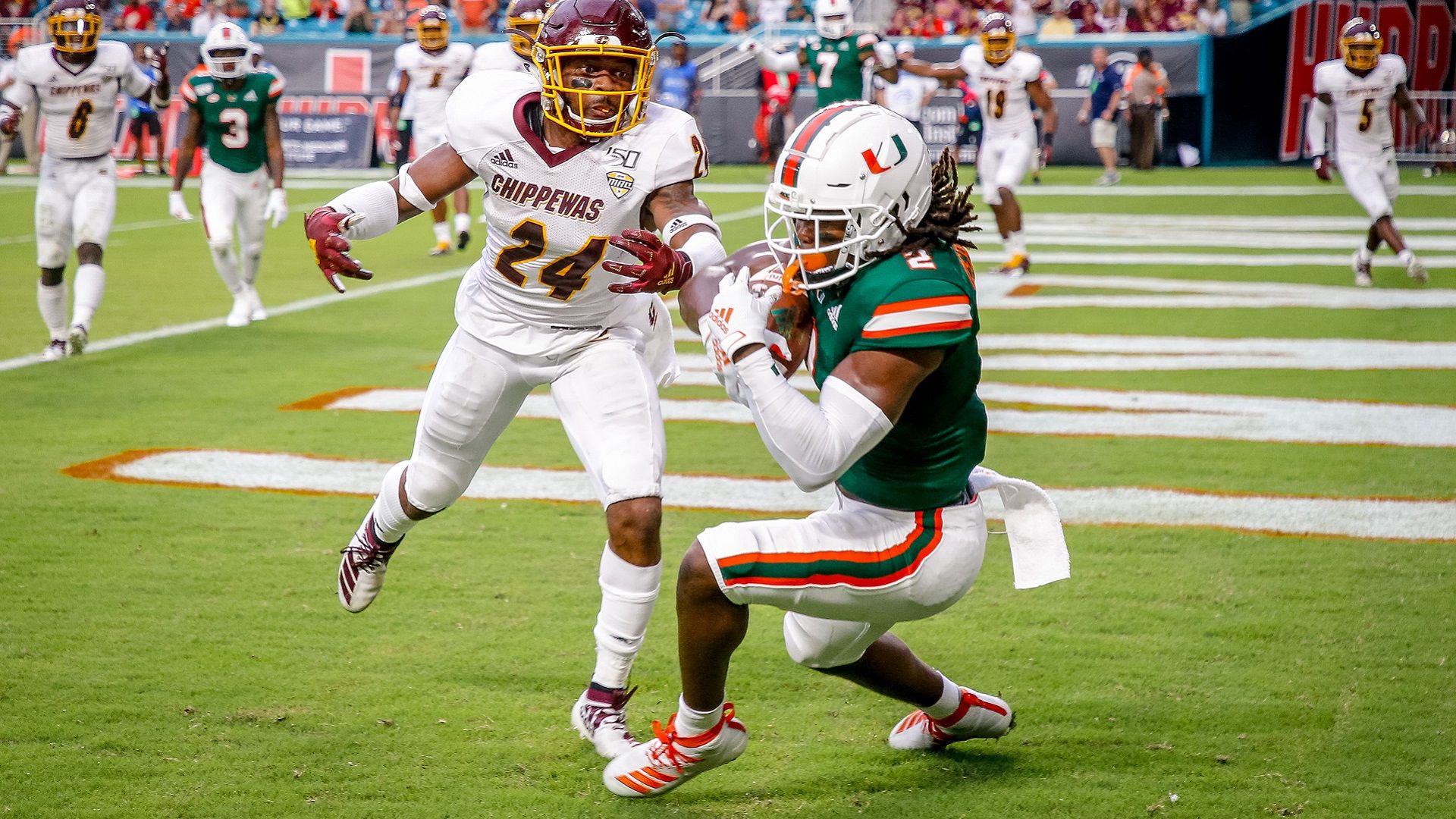 MIAMI GARDENS, Fla. – The Miami Hurricanes came into Hard Rock Stadium Saturday looking for a victory and they got it, beating Central Michigan, 17-12, but the Canes also learned that they have some work to do in the upcoming bye week.

It was the first ever meeting between the Canes and Chippewas (2-2) and Miami had to withstand a resilient CMU team that battled for 60 minutes. The Hurricanes also overcame 13 penalties, but came away with a win to even their record to 2-2.

“Obviously, it was our fourth game of the season and tonight was our second win and probably our fourth-best performance of the four we’ve had so far,” head coach Manny Diaz said. “With all that being said, the only thing that we could accomplish today was beating Central Michigan, which, after the course of 60 minutes, when everything was added up, that’s what we got done. A lot of credit for our performance you have to give to Central Michigan. I thought that the way they played up front, they got after us, and sometimes you just have to give credit where credit is due. We had a hard time blocking those guys. Obviously, we had a hard time getting our running game going. Without getting our running game going, it’s very difficult to get the play-action pass and things going down the field. It was very difficult to drop back against them. We knew that they had some good matchups and we knew that they had some talented defensive ends and, to be honest, they just played better than us in that area.”

After the defense forced a Central Michigan punt, Miami’s offense charged down the field on an eight-play, 85-yard scoring drive that put the Canes on top, 7-0. Redshirt freshman quarterback Jarren Williams moved the Hurricanes’ offense with surgical precision, completing all three of his passes for 65 yards, while junior running back DeeJay Dallas hammered through the Chippewas’ defense for a one-yard touchdown run to close out the drive and score his fifth rushing TD of the year.

Redshirt freshman Gregory Rousseau earned his first Turnover Chain late in the first quarter, stopping a CMU drive as it approached the red zone with a strip sack of Chippewa quarterback David Moore. Rousseau then recovered the fumble he forced, giving the Canes possession on their own 39 and donning the jewel-encrusted 305 chain when he returned to the sideline.

“We were in the third down package and I got a one-on-one with a guard and I just used the rip and won,” Rousseau said. “I saw that the quarterback was about to throw it, and I was like ‘man I might not get to him,’ so let me just throw my hand out there. I just put my hand out there and then he fumbled.”

Central Michigan had its own defensive highlight early in the second quarter, as the Chippewas’ Jacques Bristol sacked Williams in the end zone for a safety that cut Miami’s lead to five, 7-2, with 11:06 remaining until in the first half.

Miami recovered its second fumble of the opening half, as junior defensive end Jonathan Garvin drilled Moore to jar the ball loose and senior defensive tackle Pat Bethel fell on the loose ball to give the Canes the ball on their own 40 with 6:22 on the clock. Bethel earned the second Turnover Chain of his career, as the defensive lineman had a fumble recovery at Duke on Sept. 29, 2017.

The Chippewas gave themselves one last possession with under a minute remaining in the opening half, as Sean Adesanya sacked Williams and forced a fumble that was recovered by Bristol to give CMU the ball on the Miami 42.

But the Miami defense held firm, forcing a pair of incomplete passes before Trajan Bandy sacked Moore for a loss of 10 yards to the CMU 48 that forced a punt and preserved the Miami lead at the half.

The Canes’ first drive of the second half was nearly identical to its first possession of the game, as Williams led an eight-play, 75-yard drive that ended in a six-yard touchdown pass to K.J. Osborn that gave Miami a 14-2 advantage and marked his third straight game with a receiving touchdown.

“Just getting the ball out of my hands quick. Just working those quick routes, just taking what they were giving us,” Williams said. “I felt like when we started doing that it was really good and we were executing. I feel like we left a lot of plays out there; we’re definitely not complacent. We’re happy with the win but we know we got to get better.”

The Chippewas tried to cut into Miami’s lead halfway through the third quarter, as Ryan Tice missed a 54-yard field goal attempt that kept the Canes ahead by 12. But Tice’s next long attempt was true, as the senior drilled a 55-yard attempt to bring the Chippewas within nine points with 1:27 left in the third quarter.

Miami answered with a nine-play, 73-yard scoring drive capped by a 22-yard field goal from Bubba Baxa that brought Miami back to a 12-point lead.

The Chippewas took advantage of a slew of Miami defensive penalties on a 17-play drive that ended in a one-yard rushing touchdown by Moore. The Canes committed three penalties inside their own five yard line with each penalty giving CMU a fresh set of downs and placing the ball at the Miami 1.

The Canes stopped CMU twice, but Moore found the end zone on third and goal from the 1 to bring CMU within five, 17-12. Miami’s defense held the Chippewas to 248 total yards – 217 passing yards and 31 rushing yards – Saturday. The Chippewas scored a touchdown in the fourth quarter, ending a streak of 12 quarters at home without allowing a touchdown dating to last season.

“It was a heroic goal-line stand that was only aided by our lining up offsides,” Diaz said. “They ran a very tough play, a tight end throw-back on [Michael] Pinckney and was his hand in there? They said it was. It was a great effort that was ruined by a penalty. Trajan [Bandy], on the deflection pass, turns his head around to find the ball and gets whistled for that. But that is all part of playing clean. The rules of the game are the rules of the game and it’s our responsibility to play better and not to put ourselves into situations where you give somebody, I don’t know how many snaps that they had down there inside the two-yard line. There were too many guys fighting and doing what you want to let them just have free downs and that’s what we gave them. In a baseball analogy, during the whole game we gave them more than three outs. They played very hard. Their quarterback is a dude; that guy can play, and he made a lot of tough throws into tight windows. When you’re playing baseball and you need to get somebody out, and you give them four or five outs an inning, it’s a tribute to the fact that they only scored 12.”

Miami punter Lou Hedley booted a career-long 59-yard punt to give the Chippewas one final possession beginning on their own 5. CMU had one last chance to score against the Hurricanes and try to steal a road win. But Al Blades, Jr., picked off a floating pass from Moore with six seconds left in the game to earn his first Turnover Chain and seal the five-point win for the Canes.