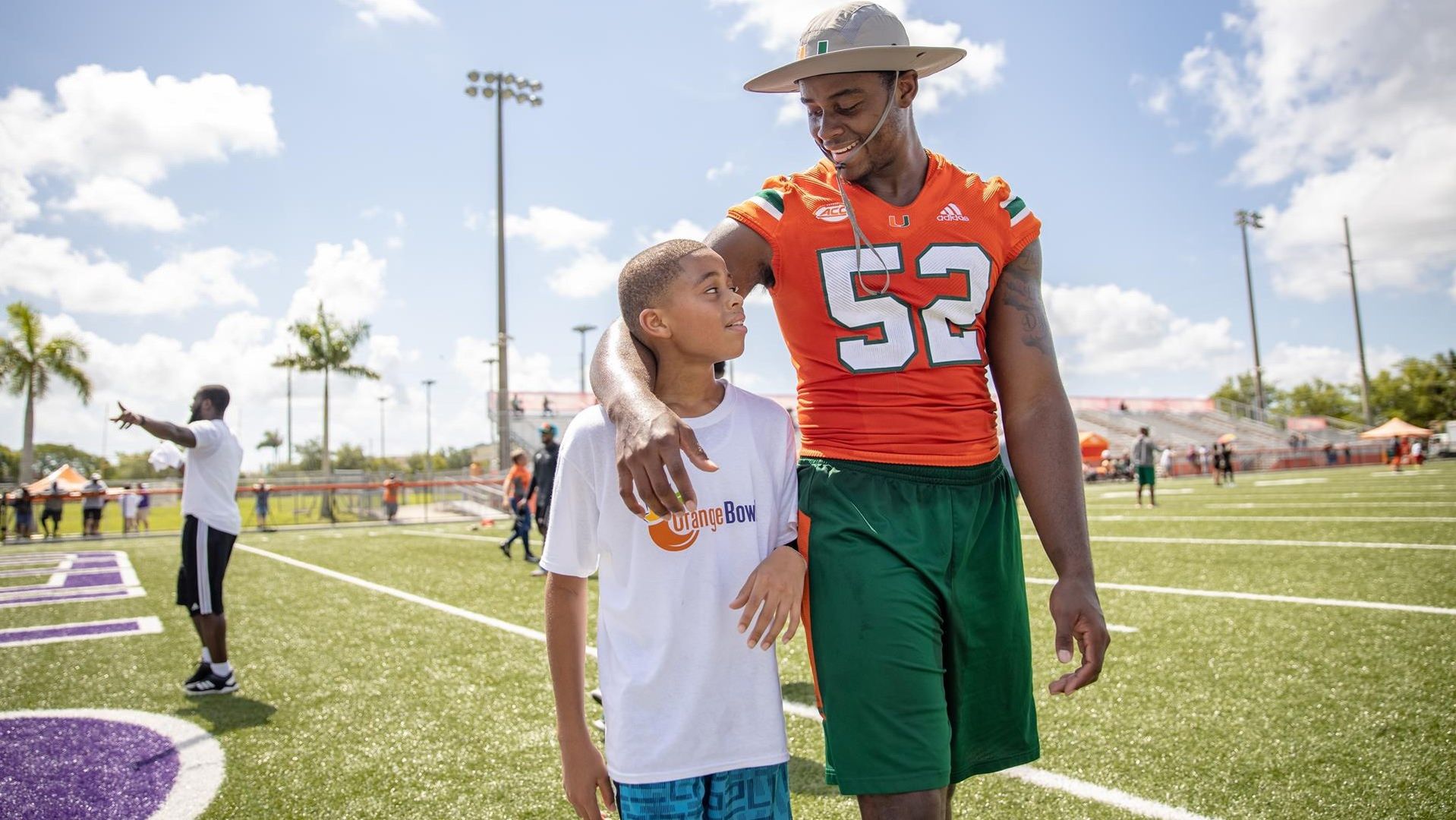 He’d wake up early on game days, hours before he’d have to take the field. And even as his parents implored him to go back to sleep, the excitement was too much to bear.

He’d scarf down his breakfast in front of the television, uniform already on, cleats already laced so he’d be ready the moment it was time to join his youth football team at either Palmetto Bay Park or later, the Kendall Boys & Girls Club.

And the days when Hurricanes football players would come speak to him and his teammates were always especially memorable in their own ways, too.

“I just remember them being so big,” Bandy laughed. “It was huge. I remember they’d wear their green, white and orange and that they’d tell us how important school was and how important it was to do the right thing off the field as well as on the field. It was great.”

These days, the tables have turned and Bandy is one of several current Hurricanes actively involved in Miami’s youth football outreach program. During the offseason, he and his teammates spend time at local parks, coaching and mentoring aspiring football players.

Saturday, more than 2,000 of those young players, their coaches and parents are expected at Hard Rock Stadium to watch the Hurricanes host Central Michigan on Miami Xtreme Youth Football League Day.

The game is just one of several events held yearly as part of Miami’s youth football development, a program coordinated by Hurricanes safeties coach Ephraim Banda.

“At the end of the day, we always say this program is the city of Miami’s program. … The University is Miami’s team and that bond starts with our young people,” Banda said. “It was really important for us that we get out, touch those kids’ lives and give them the opportunity to see that if they work hard, if they listen to their youth coaches and their families and mentors, there are options for them. They can do great things through football and the opportunities it brings. And it’s our obligation, bottom line, to provide that opportunity for them.”

For the Hurricanes, reaching out to the youth football community involves more than just having players and their families attend a game.

There are clinics for youth coaches that feature the Miami coaching staff; camps and clinics for the players, where the youngsters get to learn from current Hurricanes. And in recent years, Banda has worked to make sure the relationship between the program and the youth leagues is more personal than it has been previously, with graduate assistants and quality control staffers all checking in regularly with parks across South Florida on a regular basis.

While the community outreach in and of itself is important, Hurricanes coach Manny Diaz says it’s also important Miami help grow the game, especially given how many parents have questions about football and safety these days.

“Coach Banda has put in an extraordinary amount of work in to let everybody at all the different parks around South Florida know how committed our program is to their success and how we feel like our success is directly tied into their success,” said Diaz. “Now, more than ever, it’s important because of some of the participation numbers in youth football. We need to make sure we’re doing everything we can to support these youth coaches.

“If kids don’t play when they’re in middle school, there will be no one to play college football and so, that involves us getting out there, having our camps. We’ve put on clinics for youth coaches to teach the safer ways to play this game, the right way to tackle, the right way to block so that not only can the young men of South Florida play football, but they can be taught the same way we’re teaching the Miami Hurricanes.”

And Diaz, Banda and the Hurricanes know the more connections they play with the football players of the future, the more likely it is some of those players will grow up to wear Miami’s orange and green themselves, the same way Bandy does today.

“I remember when I was in middle school and my optimist football team, we’d all load up on a bus on a Saturday and we’d drive to the Orange Bowl and we’d go to the games. We’d all wear our jerseys and we’d watch Miami play and you wanted to be those guys,” Diaz said. “You start to sense that in recruiting. A lot of these guys have dreams of being Miami Hurricanes from a very young age. To get them in the stadium and have them see not just their heroes, but guys who might have played at their park four years ago or five years ago and that can be them one day, that can be a future for them, that’s so important.”

Added Bandy, “We’re at a level now where we’re held to a higher standard, you know what I mean? It’s important for us to be there for those kids, to talk to them and let them know that we’re here for them. It’s great, you know? And I feel like the University is doing a great job of that. … I definitely want to show them Saturday what it means to be a Hurricane. Every time I step on the field, I want them to be proud. I want our fans to be proud. I want to make our coaches proud. That’s the mentality every time I step on the field, so I think it’d be great to get out there and make a couple plays, have the little kids watch us and celebrate with them, too.”