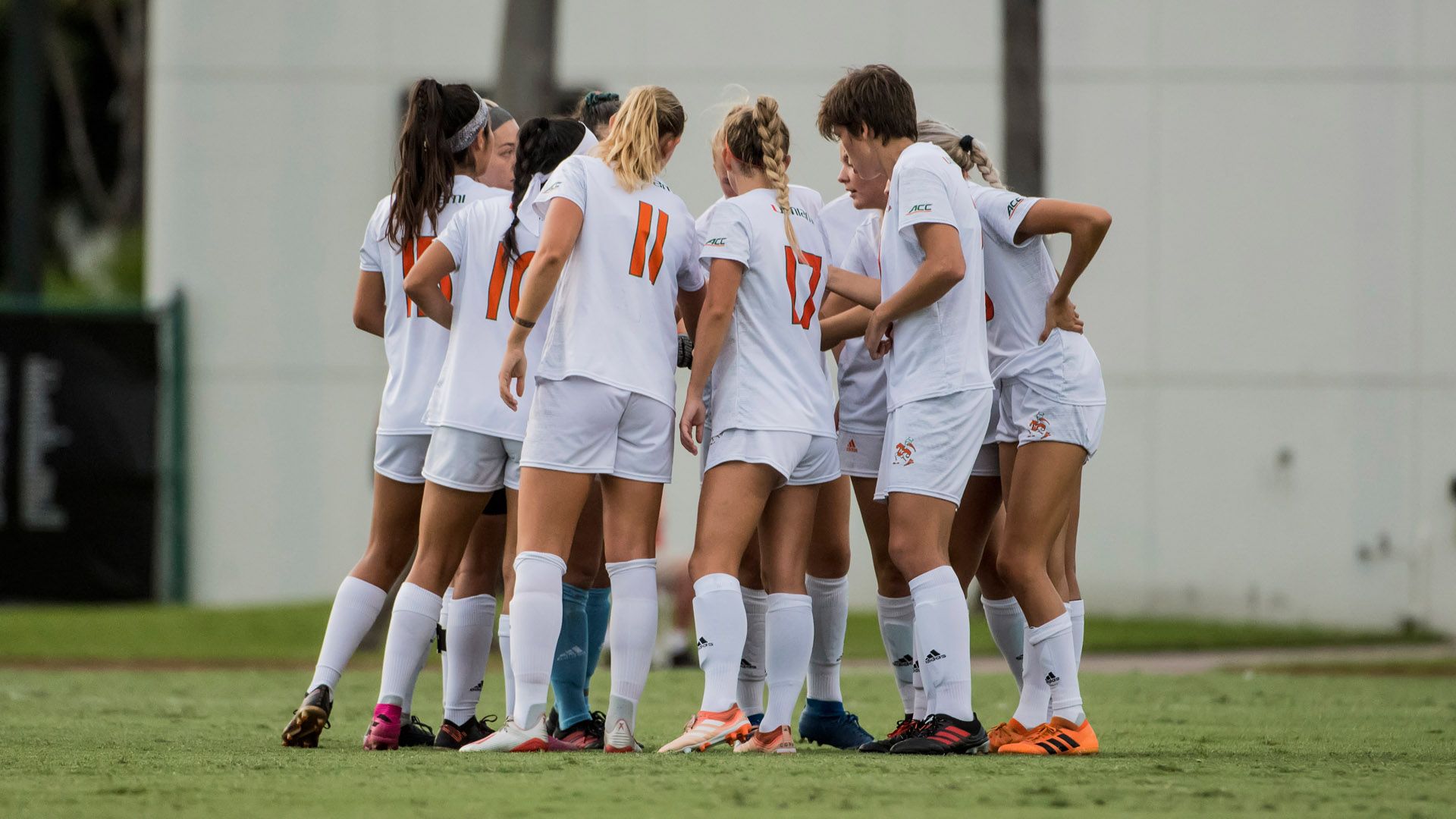 GAINESVILLE, Fla. – In the final non-conference match of the regular season, the University of Miami women’s soccer team dropped its contest against the University of Florida, 3-0, Sunday night at Donald R. Dizney Stadium.

“Obviously it wasn’t the result we wanted or expected,” Miami head coach Sarah Barnes said. “I definitely do not think it was a lack of effort because I think the team was focused and ready to go. I think it was a lack of composure against a team that brought a lot of pressure and we just didn’t quite seem prepared for it tonight.

“[Bringing that composure] is something I have seen us do before, so I know we are capable of it,” Barnes continued. “Having said that, it is something we are going to have to improve moving forward. It is a hard night, and it is a rough one to head into ACC with, but having said that, I think playing Florida is one of the best things we can do, to prepare ourselves for ACC competition. Sometimes you have to get punched in the mouth to recognize the things that you have to fix. And tonight that is what this was. We will have to regroup and get ourselves ready for Saturday in Blacksburg, [Va.]”

In the ninth minute of action, the Gators looked to get on the board sending a line-driving cross in front of goal. However, freshmen defender Mari Horpestad got a touch on the ball allowing sophomore goalkeeper Tyler Speaks to corral it up.

Registering the first shot of the match in the 22nd minute, for either team, senior midfielder Lauren Markwith sent the ball curling towards the left pocket of the net, but the shot missed just wide.

Four minutes later, the Gators found themselves on a breakaway, forcing Speaks to run out and try and make a play.

Making a move past Speaks, the Florida attacker sent a pass towards Laney Steed’s awaiting foot at the penalty kick line. The freshman then sent a blast towards the center of the net, but as the only defender in the area, sophomore Selena Fortich made a huge stop and cleared it out of harm’s way.

As the Gators looked one more time to try and take a lead into the locker room, senior forward Kristina Fisher found herself on the other end of Samantha Tobar’s shot, to prevent the goal-scoring opportunity.

Heading into the break, Miami and Florida were even at 0-0, as neither team was able to muster a shot on target.

Four minutes into the second half, Speaks made her first save of the match, stopping Vanessa Kara’s attempt towards the lower left corner.

In the 50th minute, the Gators struck first when Cassidy Lindley received the ball from just outside the 18-yard box off of a corner. Lindley blasted an attempt towards the right pocket of the net to place the home team in front, 1-0.

Twelve minutes later the Gators doubled their lead when Kara was able to find the back of the net.

In the 68th minute, Florida collected its third and final goal of the match as Sammie Betters was just able to sneak the ball past Speaks.

With a career-high six saves on the night, none were prettier than the sophomores stop in the 83rd minute. As the ball headed for the left upper-90, the Dunwoody, Ga., native made an incredible diving save.

The Hurricanes will look to regroup before opening ACC action on the road in Blacksburg, Va., against No. 16 Virginia Tech. The match is set to kick off at 7 p.m. and will be streamed live on ACC Network Extra.