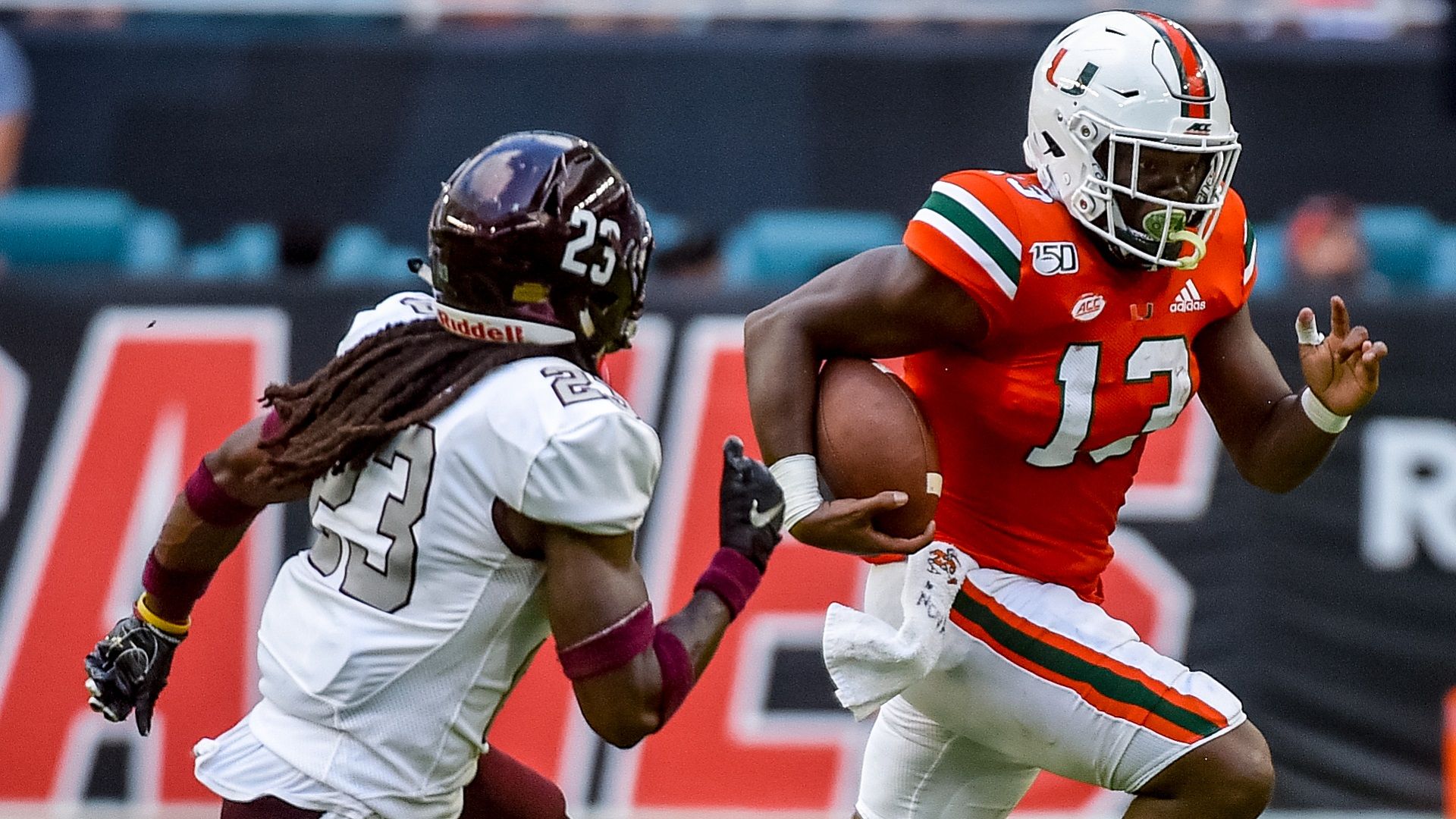 Miami head coach Manny Diaz led the Hurricanes to a 63-0 win over Bethune-Cookman, earning his first victory at the helm of his hometown program.

“Honestly, for me, I am just so happy for the players because we have put them under an immense amount of work and really challenged them,” Diaz said. “You want them to see the reward for their hard work so for them to see that was great. I do know that I prefer winning over losing so this was way more fun than the last few weeks.”

The Hurricanes put on a show for the 52,036 fans inside Hard Rock Stadium Saturday for their home opener, as running back DeeJay Dallas posted a career-best day and a stingy Miami defense posted its first shutout since Savannah State in 2018 to help the Canes earn their first win of the season in dominant fashion.

“There are a lot of happy faces in that locker room and a lot of guys that have worked very, very hard for this feeling and for this day,” Diaz said. “The game went about as we thought it would. We thought it would be difficult. We talked before the game about dealing with the adversity of expectation and how you go about winning a game; about starting to feel the pressure if there are some struggles early on in the game. You could kind of sense that with our guys that they may be pressing. We equate it to trying to hit a grand slam with no one on base. Once we settled down and just played the game, especially coming out of halftime, we were more relaxed and I thought we played a lot better.”

Dallas was an offensive star for the Canes, turning in his fifth career 100-yard rushing performance and scoring a career-best three touchdowns. The Georgia native covered 19 of the 33 yards in Miami’s first scoring drive, including the final one in a bulldozing run that put the Canes ahead, 7-0, in the opening quarter.

The standout running back flashed some serious speed early in the second quarter, bursting for a 51-yard touchdown down the Miami sideline that doubled the Canes lead to 14 points. With the touchdown run, Dallas became the first Hurricane multi-rushing touchdown game since Miami’s 41-8 thrashing of Notre Dame in 2017.

Dallas, who finished with 108 yards on the ground, barreled in for his third touchdown of the game just before halftime, pounding into the end zone from a yard out to become the first Hurricane to run for three touchdowns since quarterback Malik Rosier at Toledo on Sept. 15, 2018.

“I think that he is a guy that you want to build the identity of your offense around,” Diaz said. “When you think of the Miami Hurricanes’ offense, you think of some hard-running, downhill great tailbacks, and I think DeeJay wants to be in that legacy. He aspires to be one of those types of guys so, the fact that that he can get behind our offensive line, which is improving week in and week out, and get downhill on people, whether it’s in the dirty four or if he wants to break it long, shows that he has great versatility.”

Miami, who held the Wildcats to just 69 total yards in the opening half, had its biggest defensive highlight of the first half just before the clock hit zero. Cornerback Trajan Bandy forced a fumble and safety Robert Knowles dove on the loose ball to earn his first career Turnover Chain and give the Canes possession with 16 seconds left in the half.

“Robert was a captain of our football team today and a guy that we talked about midweek about his development and how well he’s played,” Diaz said. “I thought he made an outstanding play on the kickoff right before halftime. He ran down there and made probably the biggest hit of the first half and just played clean. It is so cool that one of the greatest things about the game of football is that when a guy is doing everything right, it’s weird how the ball bounces to him to reward him. He had a great game whether he got the turnover or not, but something about getting the turnover is a great reward for him and all of the hard work that he has done.”

Quarterback Jarren Williams, who made his first career start at Hard Rock Stadium on Saturday, made the Wildcats pay for the turnover. The redshirt freshman connected with redshirt senior K.J. Osborn on back-to-back passes, the second one for a 22-yard touchdown that sent the Hurricanes into the locker room with a 28-0 halftime lead.

“K.J. is making tough catches,” Diaz said. “We already knew the off-the-field K.J. and all the things that make him valuable to our program. What I thought was a huge play of the game was right before halftime where we were a little late with the ball to be honest. That’s a bang-bang play where you see a lot of times the guy almost catch the ball. K.J. has a knack for not almost catching it but actually making those types of plays and those are plays that you need seniors to make. Remember our team is very young with not a lot of older guys and that is the advantage of getting K.J. in; to provide that senior leadership and the sense of urgency to finish those types of plays.”

The Hurricanes opened the second half with an explosive play from receiver Mike Harley, as the junior caught a quick pass from Williams and sprinted 32 yards for his first career touchdown.

“It’s great…I’m a winner,” Williams said. “I hate losing more than anything, so to get that first win, especially for Coach Diaz, him being the head coach here and getting that first win for him means a lot to all of us because we play for him, like Jimmy [Murphy] said, we play for him. Probably one of the best [people] I’ve ever been around in my life.”

Williams, who threw for 254 yards on 19 completions, added a third touchdown to his stat line, finding freshman tight end Larry Hodges in the end zone to give the Canes a 42-0 lead with 4:36 remaining in the third quarter. The catch was a memorable one for Hodges, as it made him the first Cane tight end to score a touchdown on their first career catch since Will Mallory accomplished the feat last season against Savannah State.

“It felt good,” Hodges said. “We needed this win to build our confidence back up. Now it’s back up and we’re [ready] to go on a streak and it just felt good for fans to come out and see us. Real fans came out and supported us. So, it felt good.”

Cam’Ron Harris scored a touchdown for the second consecutive week, scoring from one yard out on the first play of the fourth quarter. The Hurricanes added on in their next drive, as Miami quarterback N’Kosi Perry found Hodges for a two-yard touchdown that put the Canes on top by 56 points.

Redshirt senior special teams ace Jimmy Murphy capped the scoring for Miami, rushing for 17 yards on four carries including a four-yard touchdown run that was his first scoring play as a Cane and ended with a celebratory flip and a pile of his teammates in the end zone.

“I wouldn’t be back here if it wasn’t for coach Diaz,” Murphy said. “You know, he brought me back. I didn’t know if I was ever going to come back and play. You know, I thought I was done with the game. He brought me back, so I just really want to thank him and the rest of my teammates. I mean it’s just amazing the bond that we are making, and it’s not just me. I mean everyone feels like that for everyone. I mean, I think to my teammates I cannot thank them enough. I remember going out right before I was about to score that touchdown we had N’Kosi Perry in there, and you know we are all very close but like when you go out there and you have N’Kosi look at your linemen dead in the eye and say ‘we gotta get this now for Murph just for us,’ so it wasn’t just for me, it was for the Canes community. It’s bigger than me. I just love being a Hurricane, and I love doing it with my boys.”