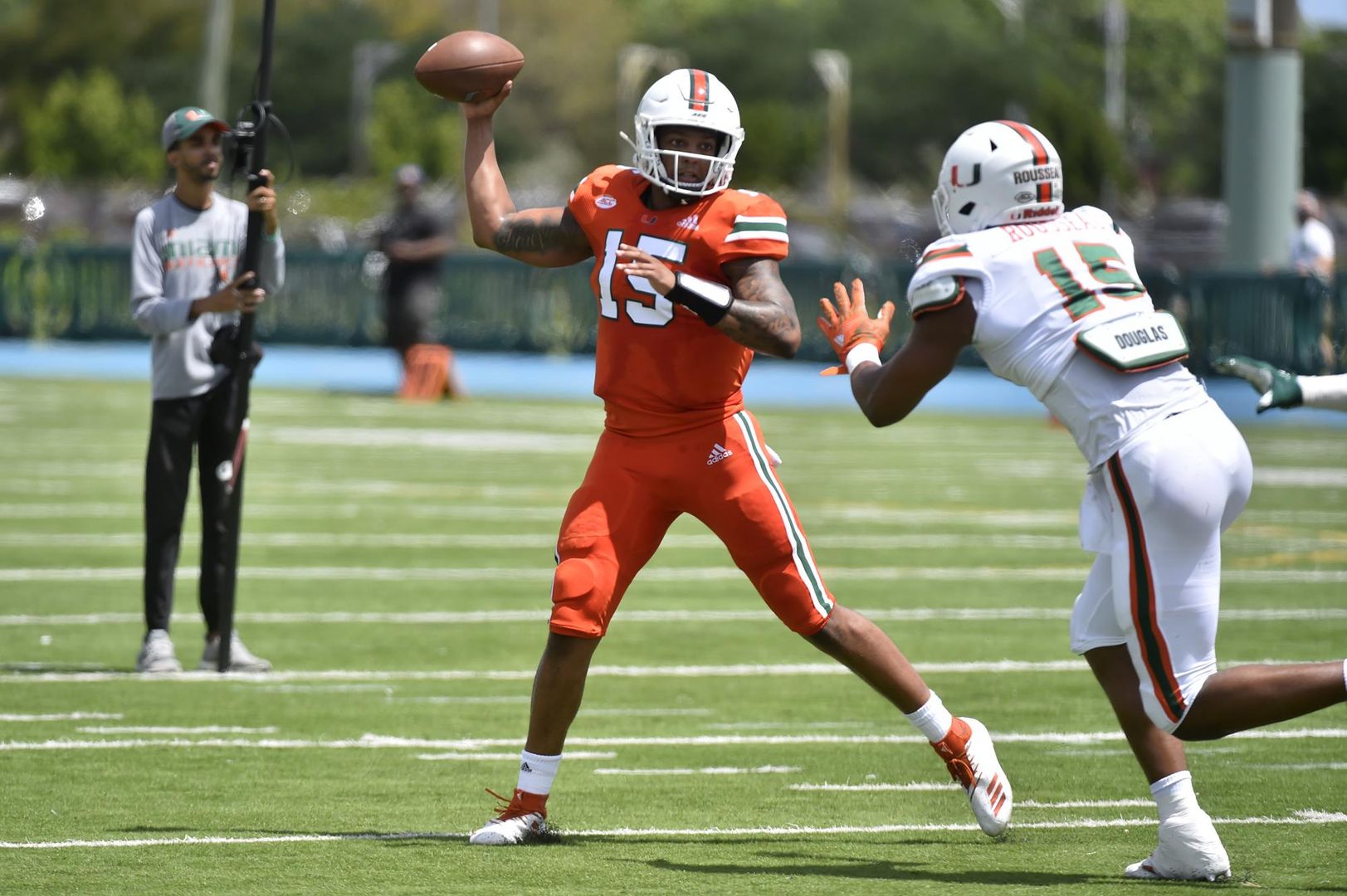 CORAL GABLES, Fla. – Competition is one of the cornerstones of The New Miami and the most highly anticipated position battle of fall camp finally has a victor.

“All three guys showed tremendous improvement and development, which is a credit to their hard work and the work of Dan Enos and his offensive staff,” Diaz said. “We believe we can win with all three guys, however, we feel like Jarren has the greatest upside due to his passing ability, his instincts and his determination.

“As we move into preparation for the Florida game we will continue the competition to determine who will serve as the backup quarterback.”Williams will be the first starting quarterback of the Diaz Era, accomplishing a goal he set for himself years ago.

“It means the world,” Williams said. “This is something that I’ve always strived for growing up. It’s been my dream since I was a kid. When I was six years old, I used to sit in front of the TV and watch Michael Vick play. That’s a dream I have always had and I’ve strived for it. Having the opportunity to lead this team is the opportunity of a lifetime and I am going to take full advantage of it.”

After playing in just one game as a true freshman a year ago, the 2019 season will be the first chance the college football world will truly get to see Williams in action. The former U.S. Army All-American and consensus four-star recruit described what he brings to an offense as a starting quarterback.

“I feel like I’m an elite passer,” Williams said. “I can make all the throws, even in tight windows. What a lot of people don’t know is that I can extend plays with my feet. I’m not a slow guy. I can tuck the ball and get 15 yards. I can make a guy miss, but I am a pass-first guy. I stand in the pocket and trust the pocket and get the ball to my receivers.”Williams completed one of his three pass attempts against Savannah State in his collegiate debut, tallying 17 passing yards and a one-yard rushing touchdown against the Tigers. But Diaz believes his starting quarterback has grown exponentially since last season.

“Obviously Jarren is a gifted passer,” Diaz said. “He has learned, I think, the maturity that comes with being the starting quarterback at a place like Miami. He is becoming more and more comfortable with the offense. I think Jarren, also, is a guy that hit 20 miles per hour [running] this summer. Jarren is a better athlete than, I think, people give him credit for – all the reasons he was recruited to come here in the first place.”

New offensive coordinator Dan Enos brought in a new offensive system and has worked tirelessly with all of Miami’s quarterbacks since January. Williams feels he has improved greatly under Enos’ tutelage and he is hungry to get even better.

“I think I’ve progressed a lot under coach Enos,” Williams said. “Being able to go out there and get meaningful reps with the 1s and really get the speed of the game down and get chemistry together is so important. I feel like it is night and day if you watched from the spring until now. I feel like I have gotten a lot better, but my goal is perfection and I am still striving for that.”Competition has been fierce in fall camp, with all three quarterbacks trying to prove themselves worthy of being named the starter. Williams has had plenty of highlights, but he is more focused on eliminating errors from practice to practice.

“I feel like I’ve been doing a good job,” Williams said. “Of course I have mistakes here and there. But my main thing is learning from it, going back and watching what I did wrong and fixing mistakes so I don’t make the same mistakes next time.”

“I feel like I’m a tough guy,” Williams said. “I have passion. I feel like I have the intangibles to really be that guy.”

While the battle for the starting quarterback job is over, Williams is just getting started with his hard work and preparation. The Lawrenceville, Ga., native wants to ensure that he excels as the leader of the Hurricanes’ offense.

“You’ve got one shot and when I get my shot, I’m going to be prepared for it,” Williams said. “When I get the opportunity, I am going to make sure I do what I do.”