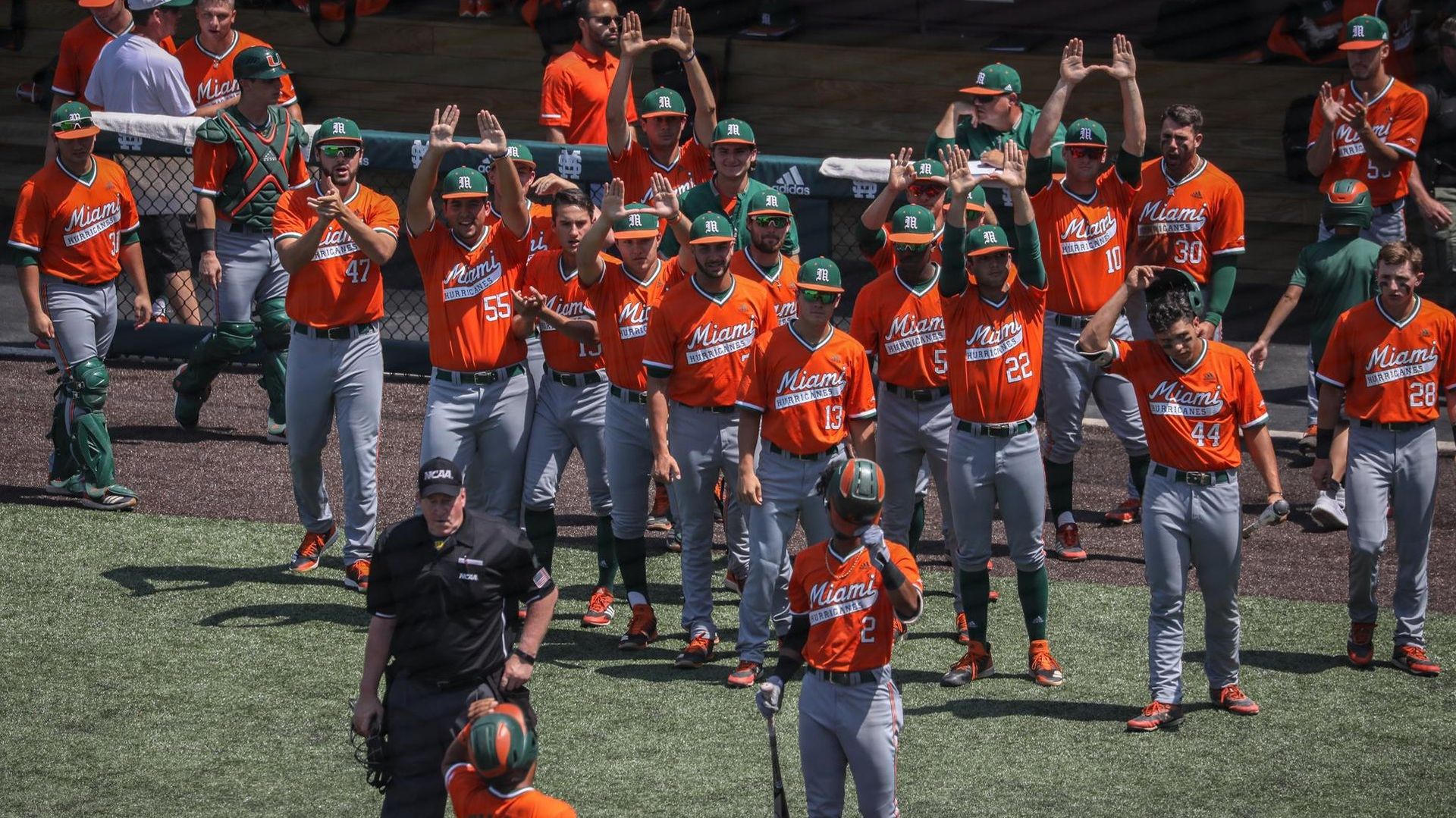 STARKVILLE, Miss. – For the second straight day, the Miami Hurricanes responded with an offensive explosion to avoid elimination in the Starkville Regional, crushing Central Michigan, 18-3.

The Canes (41-19) entered Sunday’s elimination game looking to avenge Friday’s regional-opening loss to Central Michigan (47-14) and responded their first six-homer game of the year and with a strong start from Brian Van Belle. Similar to Saturday’s game against Southern, the Miami offense caught fire and scored double-digit runs to end the MAC champion Chippewas’ season.

“You could not have really drawn it up any better for us,” head coach Gino DiMare said. “Once again, we were fortunate. Brian threw an unbelievable game. That is a good hitting team, a very good hitting team. It helps when you put a lot of runs on the board. I felt like we took the wind out of their sails at some point in the middle part of the game.”

After retiring the first six batters he faced, Central Michigan starter Jordan Patty ran into trouble against the bottom of Miami’s potent lineup.

Seventh hitter Alex Toral led off the top of the third with a double to left and nine-hole hitter Gabe Rivera destroyed a two-run bomb deep to left for his second homer of the Starkville Regional that put Miami ahead by a pair of runs.

Rivera, who hit a solo homer against Central Michigan on Friday night, was one of two Canes to homer in the third. Two batters later, Anthony Vilar crushed a no-doubter to right that nearly flew out of Dudy Noble Field for the freshman’s fifth home run of the season.

Miami got a big shutdown inning in the bottom of the third, end the frame with a strike him out, throw him out double play. Van Belle fanned CMU star Griffin Lockwood-Powell and Miami catcher Michael Amditis fired a dart to second base to pick off Garrett Navarra and end the frame with Miami ahead, 3-0.

Van Belle was outstanding for the Canes, throwing eight strong innings to save the bullpen ahead of a night game against regional host and No. 6 national seed Mississippi State. The redshirt junior allowed three runs on eight hits while striking out eight, throwing a career-high 115 pitches to earn his 10th win of the season and become the first Miami pitcher with 10 wins in a season since Michael Mediavilla won 11 games in 2016.

The homer parade continued an inning later, as Raymond Gil cranked a two-run laser over the right field wall for an opposite-field homer that gave the Hurricanes a five-run advantage. JP Gates followed with a base hit before slugging sophomore Alex Toral beat the shift with a beautiful bunt to the left side of the infield.

Miami picked up its third run of the fourth inning when Amditis put down a bunt and CMU first baseman Evan Kratt threw wildly to third trying to retire Gates. The error allowed the freshman to score and Toral and Amditis to move to second and third and give the Hurricanes a six-run lead.

The Canes kept the rally alive, as Rivera hit an RBI double to right and scored on a sacrifice fly by Jordan Lala that gave the Hurricanes an 8-0 advantage. Vilar followed with a rocket up the middle for a base hit that knocked Patty out of the game in favor of lefty Ryan Palmblad. The freshman, who allowed just one run in three innings of relief against Miami on Friday, did not fare as well the second time around against the Canes.

Gil and Gates had consecutive two-out singles in the fifth to give Miami runners on first and third before Palmblad balked a run home to make it 9-0 in favor of the Hurricanes. Toral followed with his 23rd homer of the season, a two-run missile to right that gave Miami an 11-run advantage.

“He is swinging the bat like we thought he would when we got him here in the first place and definitely at the right time,” DiMare said of Toral. “Batting seventh in our lineup, I would probably say he is as hot as any seven-hole hitter in the country. It is good to have him.”

Central Michigan finally figured out a way to score against Van Belle in the fifth, as David Cole led off the inning with a double and scored on an RBI two-out single by Zach Heeke. Zavier Warren followed with an RBI double, but the redshirt junior struck out Lockwood-Powell for the second time in the game to end the rally and keep Miami on top by nine.

The Canes charged right back against reliever Ian Leatherman in the top of the sixth, as Freddy Zamora hit a sacrifice fly to right that drove in pinch runner Tony Jenkins and Del Castillo rocked a moon shot to right for his second homer of the weekend against the Chippewas. The two-run blast was Miami’s fifth of the game and ran Del Castillo’s RBI total to 71 on the year, passing Yonder Alonso’s 69 RBI for the most by a UM freshman since 2006.

With one out in the seventh, Jenkins smacked an RBI single up the middle off lefty reliever Jack Collins to drive in Isaac Quiñones and give Miami a run in five consecutive innings.

CMU added a run in the bottom of the inning on an RBI single by Warren, but Toral hit a rocket out to right for his second homer of the game. The eighth-inning two-run shot marked Miami’s first six-homer game of the year and moved the sophomore slugger past Pat Burrell and into second place in UM history, tied with Alonso and just one behind Phil Lane’s 25 for the school record.

“It’s amazing,” DiMare said. “For anyone that has played in our ballpark, our park is not suited for a left-handed hitter. Yonder Alonso, most of his home runs were to the opposite field If the wind blows out from center, I am thinking if he played at this place or maybe Wake Forest, he might have 40 home runs this year. It is tough to hit the ball out of our ballpark in right field but just amazing story from last year to this year. I cannot be happier for him, and I am proud of him.”

Miami added its final run in the top of the ninth, as Del Castillo hit a fielder’s choice that pushed home Chad Crosbie and brought his season RBI total up to 72 and just four behind Ryan Braun’s freshman record 76 RBI, set in 2003.