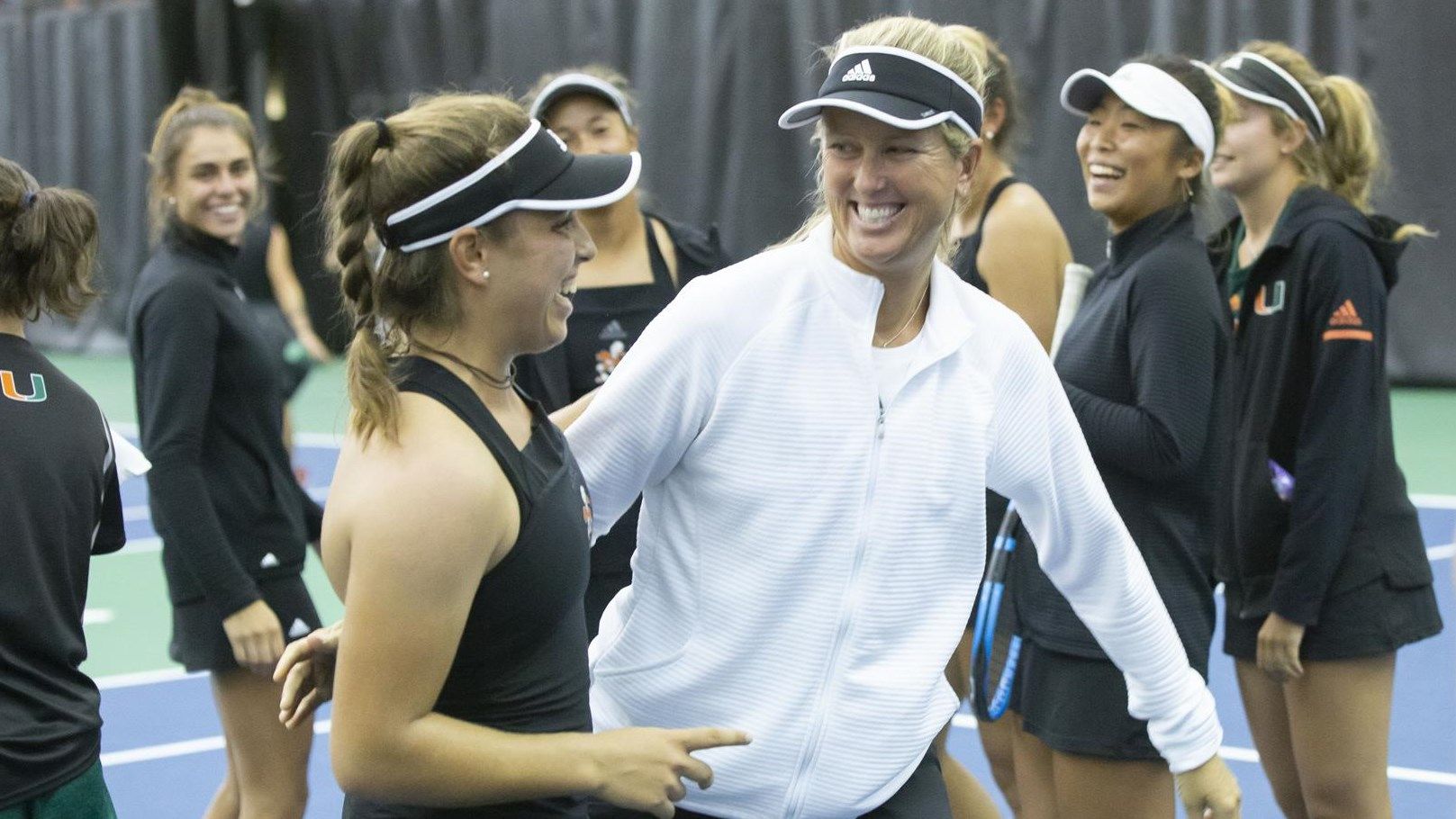 STILLWATER, Okla. – The match took nearly three hours and 40 minutes, but for the University of Miami women’s tennis team, it was well worth the wait.

With the win at the Greenwood Tennis Center, the Hurricanes advanced to the Round of 32 for the 18th consecutive year. They will face either No. 15-ranked and No. 15 seeded Oklahoma State, the host team, or Central Arkansas Saturday at 3p.m.

“That was an unbelievable college tennis match, one of the better ones that we’ve had this year,” Miami head coach Paige Yaroshuk-Tews said. “[That is a] a very good Washington State team and a very dangerous team inside. A very unorthodox kind of team . . . with players playing a certain style of tennis that we don’t see a lot. Just really great tennis from top to bottom.”

Washington State (19-11, 3-7 P12) got on the board first in doubles with a victory in a top-25 matchup. No. 22 Tiffany Mylonas and Hikaru Sato tallied a 6-4 win over the No. 13-ranked pair of freshman Daevenia Achong and senior Daniella Roldan.

Miami countered with a 6-3 triumph by freshman Lucia Marzal and junior Yuna Ito over Michaela Bayerlova and Aneta Miksovska. Playing together for the first time since April 7, the Hurricane duo won the final six games after dropping the first three.

Melisa Ates and Yang Lee clinched the doubles point for the Cougars by defeating junior Estela Perez-Somarriba and sophomore Ulyana Shirokova, 6-4. Miami won the first three games of the match, dropped the next five and then staved off two match points to stay alive, but the Washington State duo fought off two game points of its own to win at deuce.

By dropping the doubles point, the Hurricanes had their streak of NCAA first-round shutouts, dating back to 2005, snapped at 14 years.

“I didn’t sense them panicked after doubles. Doubles was so weird,” Yaroshuk-Tews said. “It was just so loud. It was so slow on Court 1; it was so fast on Court 2. The whole rhythm was just weird and I feel like we came in between doubles and singles, and we all just took a depth breath and nobody panicked. They were prepared. They knew that Washington State was a good team.”

Lee opened singles play by doubling the Cougars’ lead with a 6-1, 6-4 decision over Roldan, whose comeback bid fell short on deciding point, as she looked to even the second set at five.

Achong recorded the Hurricanes’ first point of the day, slicing the deficit in half with an impressive 6-3, 6-3 result against Sato.

Just seconds later, Ito gave Miami its first lead of the day, 3-2, as she registered a stellar 6-4, 6-0 victory against Mylonas.

In each of the final two matches, the player who lost the first set won the second, forcing a pair of three-setters with the match on the line. It was Shirokova who earned her court, while Marzal was on the short end of it on hers.

“I thought it was very important to get Uly back in that match just so we’re not leaving a freshman in that position if all the other courts worked out the way I was hoping for them to work out,” Yaroshuk-Tews said of moving from Marzal’s court to Shirokova’s court after Washington State took a 2-0 lead. “So, I made a switch down there. Uly did a great job of getting herself back in that match and taking a lot of the pressure off of Lucia.”

Shirokova dropped four of the first six games before winning two in a row to pull even at 4-4. Miksovska, however, took the last two games of the match to record a 6-4, 3-6, 6-4 win and tie the match at three.

Marzal also started slow in the decisive set, as Ates jumped out to a 3-1 lead. The Valencia, Spain, native then stormed out to a 4-3 lead, after which the players traded games until the score sat at 5-5.

As she did in the same situation in the opening set, Marzal won the final two games to earn a 7-5, 3-6, 7-5 triumph and clinch the 4-3 decision for the Hurricanes.

“Lucia has been the kid all year that has said she wants a match to come down to her. She’s the one that talks about it,” Yaroshuk-Tews said with a laugh. “. . . I told her when she was down, 1-4, in the first set that the match was going to come down to her. She was playing horrifically. She was on another planet and I said, ‘This is the moment you want, you got it. Figure it out.’ She comes back and she wins the first set. The moment comes down to her and she played the last game, I think, as clean as you could play.”

For the Hurricanes, who were in the NCAA field for the 24th year in a row, their win was their first by one point in the opening round of the NCAA Team Championship in the 64-team era (1999-present).

The last time Miami started NCAA action with a one-point win was in 1997, when it topped USF, 5-4.

Miami is now 54-33 all-time in NCAA Team Championship play, including 41-17 in Yaroshuk-Tews’ 18 years at the helm. The Hurricanes sport an even 27-27 mark at neutral sites and a 4-3 ledger in the state of Oklahoma.

The Hurricanes will be seeking a 13th trip to the NCAA Sweet 16 in the past 14 years when they face either the Cowgirls or the Bears Saturday afternoon.