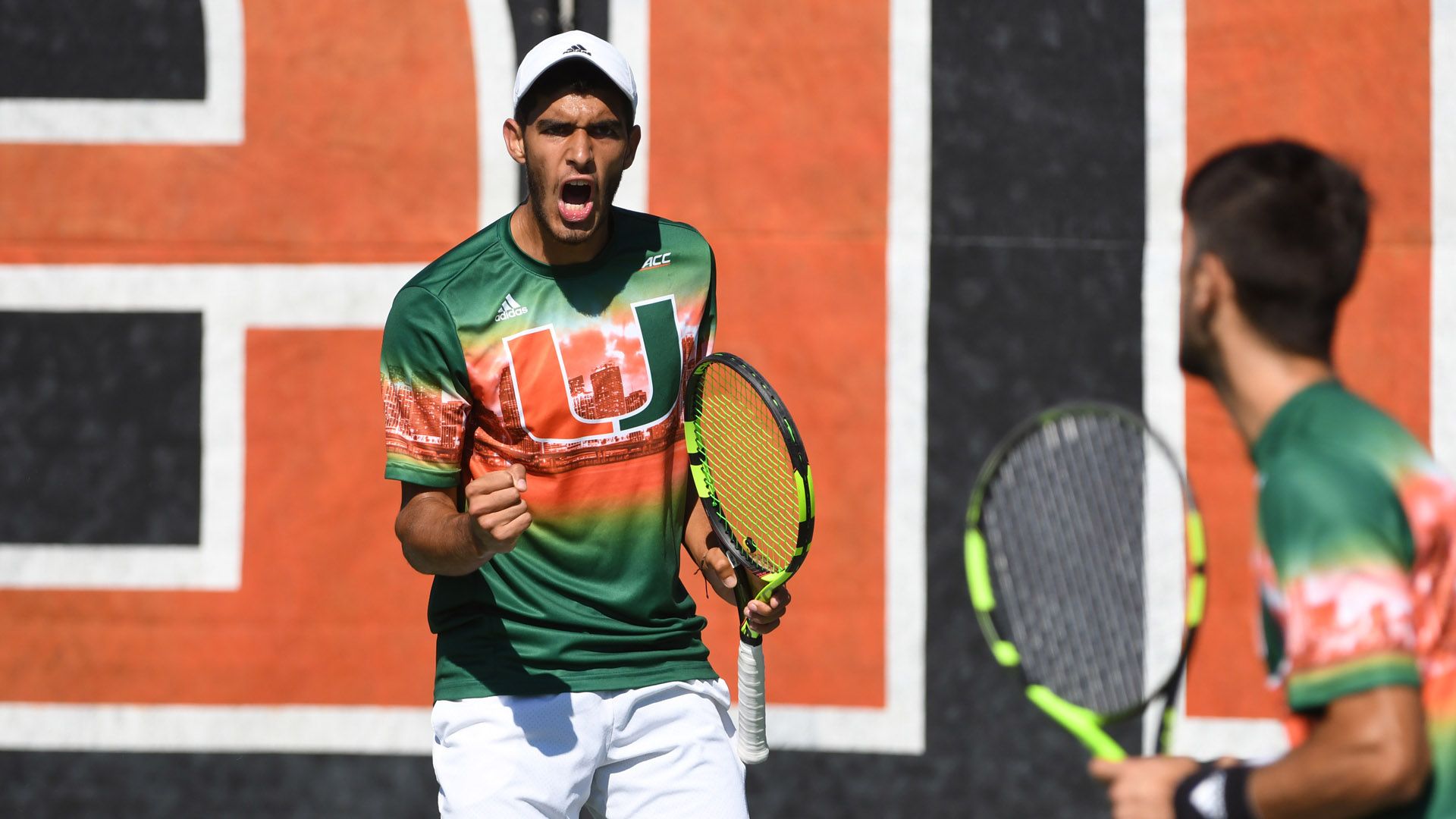 DURHAM, N.C. – Trailing 3-0 in the match, the University of Miami men’s tennis team completed the comeback against Duke, 4-3, Friday night at the Ambler Tennis Stadium, to extend its winning streak to seven matches.

“I am so happy for the guys; I am so proud of them,” Miami head coach Aljosa Piric said. “You know, we lost the doubles point today. We had opportunities to get that point, but we lost it.

“I told the guys, in between doubles and singles, that it is tough to win on the road, especially when you lose a doubles point; but good teams find a way to do it,” Piric said. “We went out, we competed really hard and we ended up clinching the match with a tiebreaker on court 1.”

No. 23 Miami (15-4, 6-0 ACC) got off to a fast start in doubles, with redshirt junior Dane Dunlap and junior Stephen Madonia topping Spencer Furman and Robert Levine, 6-3.

Trailing 1-4 against Catalin Mateas and Sean Sculley, Franco Aubone and Francisco Bastias won the next four games to take a 5-4 advantage on court 3. However, the freshmen came up short, 5-7, as Duke claimed the advantageous doubles point.

In singles, Mateas doubled Duke’s lead with a 6-2, 6-2 victory over Dunlap.

Despite the deficit, the Hurricanes looked to change the tides by claiming the opening sets on courts 1, 2, 4 and 5.

Within seconds, the Duke lead dwindled to one, with sophomore Bojan Jankulovski, ranked No. 81 in the Oracle/ITA singles poll, cruising past Sculley, 6-2, 6-3.

In a top-75 showdown, all eyes turned to court 1, with No. 27 Soriano Barrera and No. 75 Nick Stachowiak battling through a back-and-forth third set tiebreaker.

After claiming the opening set, 6-4, Soriano-Barrera came up short in the second, 3-6, to enter a winner-takes-all final set.

In the set, Soriano held a 5-3 advantage before Stachowiak won three straight games to take a 6-5 lead. The Barcelona, Spain, native quickly responded and tied the match at 6-6.
In the tiebreaker, the sophomore jumped out to an early 4-0 lead and then claimed three of the final six points to seal the victory, 6-4, 3-6, 7-6 (7-3).

“What is cool about this team, is that different guys are stepping up at different times and we have been able to find different ways to win,” Piric said. “I am happy for our guys. We are going to rest up tonight, practice a little tomorrow and get ready to play North Carolina on Sunday. They are one of the best teams in the country, but we are excited. We are going to put our best foot forward and see what happens.”

Miami will continue a three-match road stretch with a trip to Chapel Hill, N.C., to face No. 11 North Carolina Sunday at 1 p.m.