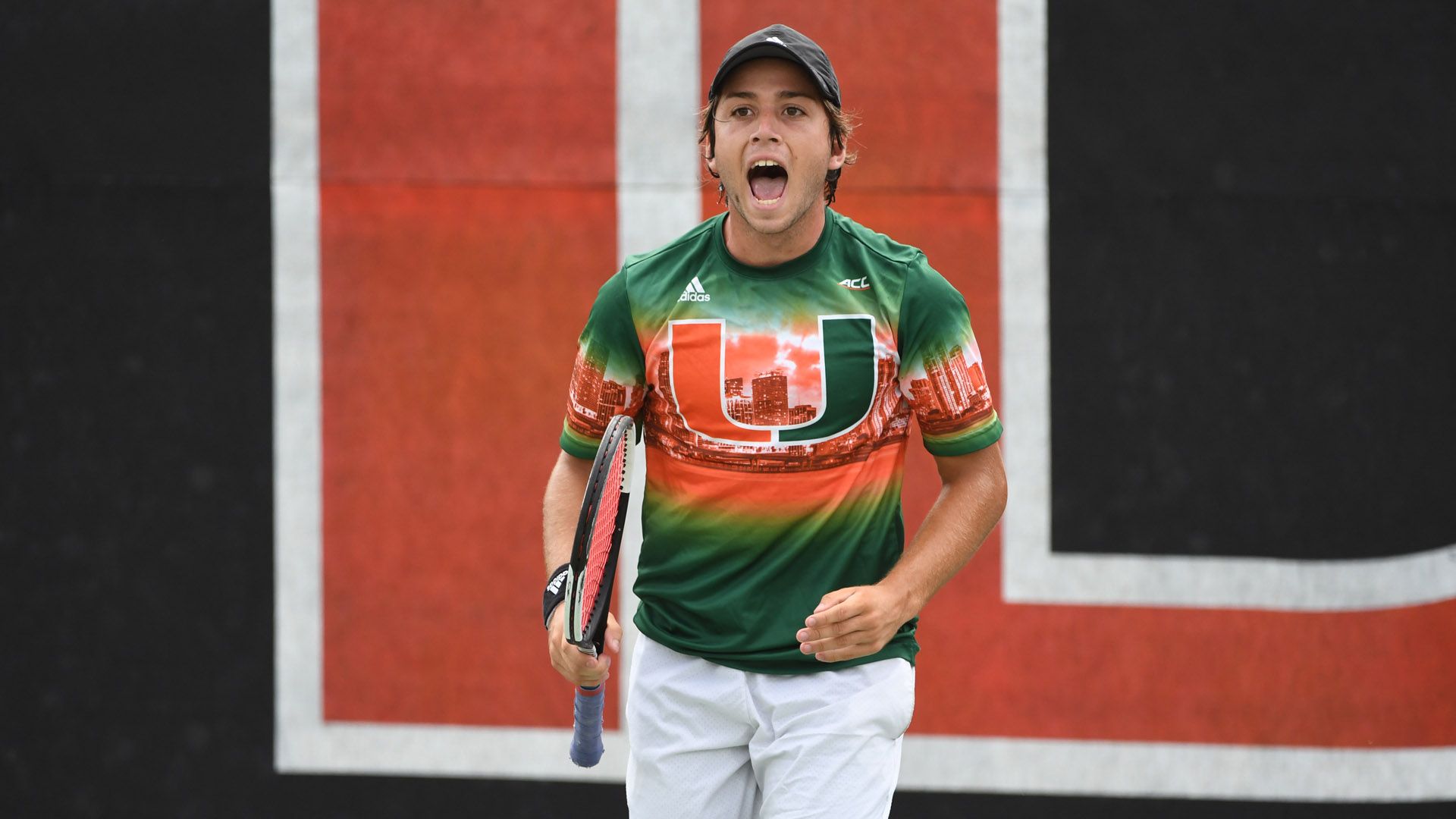 “Great team win against a very good Notre Dame team,” Miami head coach Aljosa Piric said. “We know it is tough to come down to Miami and play our guys, on our court. It is a special atmosphere and a unique setup; there is sun, there is heat and there is humidity. Our guys love it. It is very, very tough to play us down here and our guys know that.”

Notre Dame (10-7, 3-1 ACC) got off to a fast start on each court in doubles, but the Hurricanes responded impressively.

Tied at 2-2, freshmen Franco Aubone and Francisco Bastias won the final four games, to seal the victory 6-2 over Guillermo Cabrera and William Howells and improve to 6-0 as a tandem this spring.

Competing at No. 2 doubles, redshirt junior Dane Dunlap and junior Stephen Madonia found themselves in a 2-5 hole against Grayson Broadus and Matt Gamble. The duo rallied off five straight games to win the match and clinch the advantageous doubles point with a 7-5 decision.

In a tiebreaker, play was halted on court 1, with sophomores Adria Soriano Barrera and Tatsuki Shimamoto leading Tristan McCormick and Axel Nefve, 6-6 (5-2)

“We competed well today, especially in doubles,” Piric said. “Bastias and Franco got us a quick win, but then we were down on court 2 and were able to turn it around. We were able to just keep chipping away and kept believing. And winning the doubles point gave us a lot of momentum heading into singles play.

In singles action, the Irish quickly evened the match when Gamble defeated Dunlap, 6-0, 6-2.

Again, Notre Dame was able to even the match, this time turning to court 4. Cabrera edged sophomore Bojan Jankulovski, No. 71 in the Oracle/ITA rankings, 6-0, 7-6 (7-3).
Moments later, No. 19 Soriano Barrera looked to complete a second-set comeback against Nefve on court 1. The Barcelona, Spain, native found himself trailing 1-4 in the second, before winning the final five games to seal the victory, 7-5, 6-4.

Undergoing his first setback of the spring, sophomore William Grattan-Smith dropped a closely contested match on court 6, 5-7, 3-6, against Broadus.

With the overall match tied at 3-3, all eyes turned to court 2, where Bastias was looking to secure a straight-set victory. After sneaking out a 7-6 (7-4) opening-set tiebreaker, the freshman again found himself tied at six through 12 second-set games.

Dropping a pair of points to fall behind 5-6 in the tiebreaker, the Mendoza, Argentina, native won the final three points to seal the victory, 7-6 (7-4), 7-6 (8-6), as the Hurricanes rushed the court in jubilation.

“Credit to Franco for getting the first point up on the board in singles,” Piric said. “Adri stepped up today, he overcame some adversity and really proved to himself that he is capable of doing things that he may not think he is capable of doing. And obviously, very happy for Bastias to clinch.”

Overall, the Hurricanes are off to their best start in ACC action since opening the 2005-06 season with an equivalent 4-0 mark.

“We will recover tonight and tomorrow, and we will be ready to close off the week against Boston College and Connecticut,” Piric said.

Miami will close out a five-match homestand with a doubleheader on Sunday against the Eagles (2 p.m.) and Huskies (6 p.m.). The matchup against Boston College will be aired on ACC Network Extra.