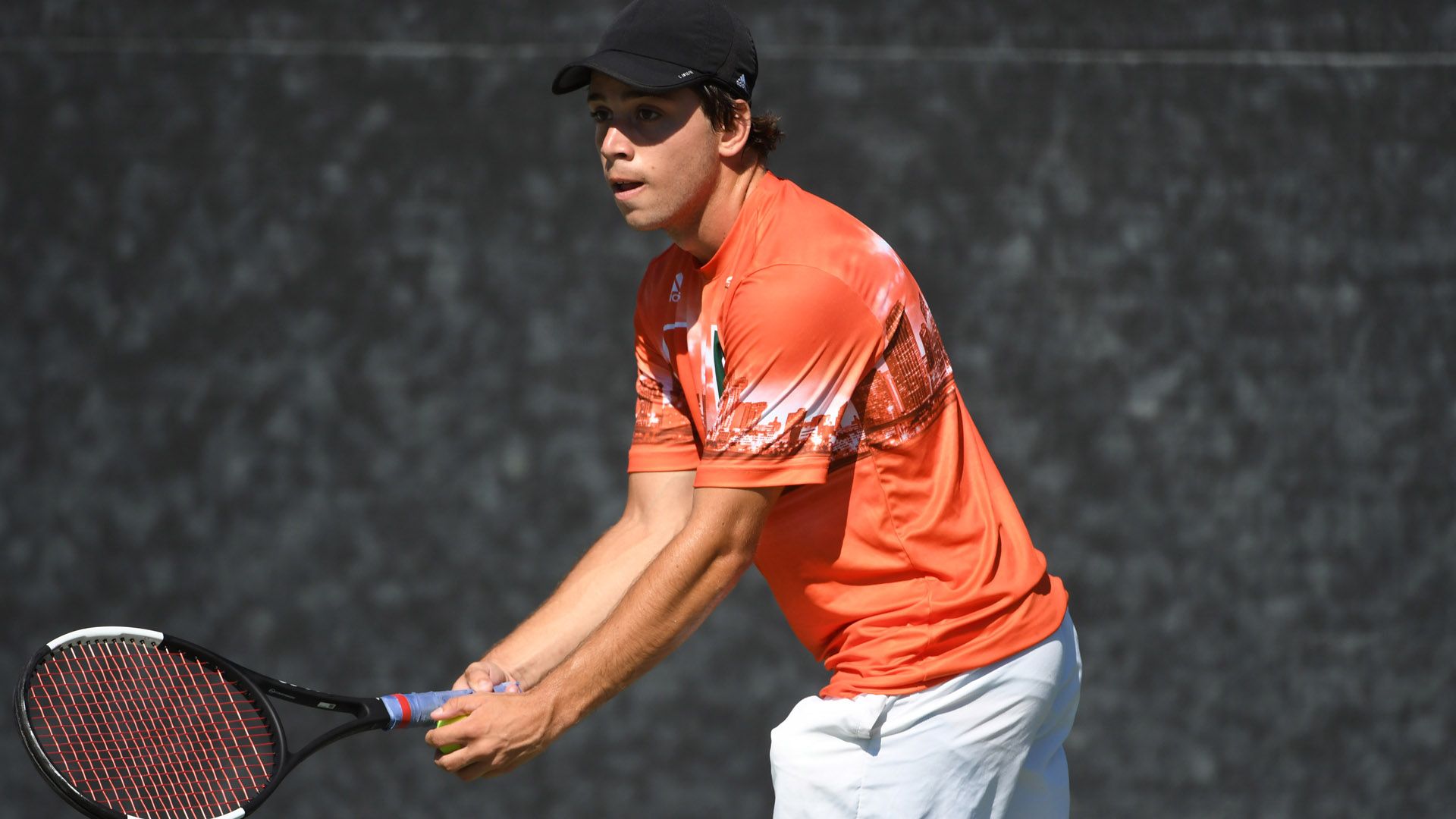 AUSTIN, Texas – Facing eighth-ranked and top-seeded Texas in the second round of ITA Kick-Off Weekend, the University of Miami men’s tennis team fell to the Longhorns, 0-4, Saturday afternoon at the Texas Tennis Center.

In doubles action, the teams split a pair of matches on courts 1 and 2, with Texas’ Christian Sigsgaard and Harrison Scott, ranked No. 33 on the Oracle/ITA doubles list, topping Miami freshmen Franco Aubone and Kaya Gore, 6-0.

On the adjacent court, sophomores Bojan Jankulovski and Adria Soriano Barrera improved to 3-0 as a pair this season, cruising past Colin Markes and Leonardo Telles, 6-1.

In the deciding doubles match, redshirt junior Dane Dunlap and junior Stephen Madonia found themselves in a back-and-forth tiebreaker against Yuya Ito and Chih Chi Huang. With Texas holding a 6-5 advantage following its serve, Ito and Huang earned the break and sealed the match, 7-6 (7-5).

With the win, Texas (3-0) entered singles play holding a 1-0 advantage, while it was the first time this season Miami (4-1) was unable to secure the doubles point.

“Other than really a couple of courts, Francisco winning a set on 3 and Dane at No. 4, I just felt like we didn’t have any wind behind our backs during singles play. I felt like we could never really get going,” Piric said after dropping the close doubles point. “And that is a credit to Texas. They are a good team, they are a top team, and they beat us today. We have to mature and we have to learn from this.”

At No. 1 singles, No. 21 Soriano Barrera held a 3-1 lead against fourth-ranked Sigsgaard, but the sophomore dropped the final five games in the set and 11 of the final 14 overall, as Sigsgaard avenged his loss from the Miami Spring Invite, 6-3, 6-3.

The remaining three matches remained unfinished, with Scott holding a slight advantage on court 4, 3-6, 6-0, 3-0, while Gore trailed against Rodrigo Banzer, 4-6, 1-3.

On court 3, Francisco Bastias, ranked No. 97 in the ITA/Oracle singles rankings, outlasted Leonardo Telles, 7-5, in the opening set, while the two were even at 1-1 in the second set before the match concluded.

“This team has the quality and potential [to compete in these matches], but we have to continue to get better and mature,” Piric said. “There was certainly a lack of maturity today to handle a big match like this, against a top school on their courts. But we have to get better, we have to mature and just keep moving forward.”

Next up, the Hurricanes will battle another top-10 team on the road, when they travel to Starkville, Miss., to challenge third-ranked Mississippi State at 2 p.m. on Friday. Following the conclusion of the match, Miami will play a neutral site contest against Jackson State at 6 p.m.