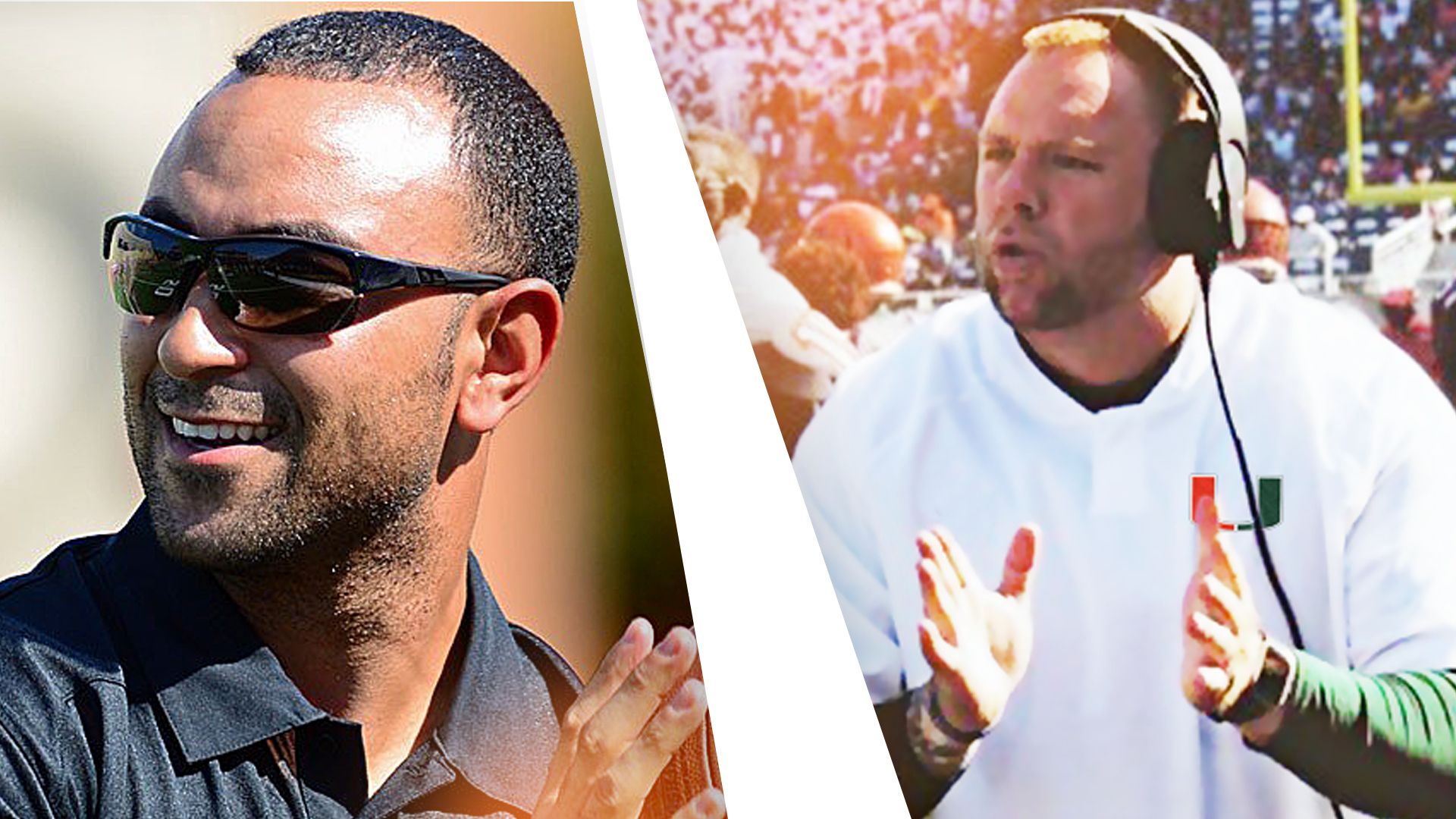 “We’re excited to welcome these coaches to the Miami family,” Diaz said. “Taylor was a Biletnikoff Award finalist as a college receiver and he boasts a terrific track record coaching that position. He also has strong ties to our offensive coordinator, Dan Enos, which is significant as we begin to build and shape our offense.

“Stephen is an outstanding coach who has had great success at both the college and high school levels. He is a proven recruiter on a national scale, and also has strong ties to The U and to South Florida. They will both be excellent additions to our staff.”

Stubblefield, a record-setting wide receiver during his playing days at Purdue, comes to UM after two seasons as wide receivers coach at the Air Force Academy. Field, a veteran coach from the college and high school ranks, comes to UM from Louisville, where he was hired as Director of Recruiting earlier this month. This is his second tour of duty at Miami, having served as a defensive graduate assistant and special teams coach for the Hurricanes from 2007-08.

Stubblefield’s receivers averaged 17.7 yards per catch over his two seasons in Colorado Springs. In 2018, senior Marcus Bennett caught 24 passes for 465 yards and three scores and finished his career with an average of 21.6 yards per catch, ranking fifth in Falcons history.

As a wide receiver at Purdue, Stubblefield was a consensus All-America selection and a 2004 finalist for the Biletnikoff Award, presented to the nation’s outstanding receiver. He finished his career (2001-04) with a then-NCAA record 316 receptions, ranking second in Big Ten history with 3,629 receiving yards. His 16 receiving touchdowns in 2004 are a Boilermakers single-season record.

After graduating from Purdue in 2005, Stubblefield had professional stints with the National Football League’s Carolina Panthers and St. Louis Rams as well as the CFL’s Hamilton Tiger-Cats.

Stubblefield and his wife, Lisa, have a son, Jagger.

Field spent last season as the Director of Recruiting at Oregon, where he helped the Ducks land the top-ranked class in school history. Oregon’s 2019 class was ranked first in the Pacific-12 Conference and ninth nationally by 247 Sports.

In 2017, Field served as Louisville’s Director of High School Relations and NFL Liaison, helping the Cardinals sign 19 student-athletes during the initial early signing period, eight of which enrolled in January. The 2018 signing class featured a school-best 11 four-star recruits and a pair of Under Armour All-Americans.

Field came to Louisville after serving one season as the tight ends coach and recruiting coordinator at Florida A&M. Prior to joining the staff at FAMU, Field was a highly decorated head football coach and offensive coordinator at North Marion Senior High in 2014-15.

Field was named the 2015 Florida Athletic Coaches Association (FACA) Coach of the Year, guiding North Marion to the regional quarterfinals, after his squad led the county in passing, rushing and scoring. Field was also selected as the offensive coordinator in the 2015 Offense-Defense All-American game in Orlando, Fla., and produced six players selected to play in the All-American game, a Marion County record.

Prior to his stint at North Marion, Field served as head coach and offensive coordinator at Miami Northwestern High (2012-14), where he restored the perennial prep power to prominence, guiding them to a regional appearance in his first season. During his tenure at Northwestern, 46 players earned scholarships, including future Hurricanes and Pittsburgh Steelers cornerback Artie Burns.

Field coached running backs for three seasons at Hampton University (2009-11), in addition to serving as recruiting coordinator, run game coordinator and director of operations. He helped the Pirates produce two top 10 MEAC rushers during that stretch.

Before his stint at Hampton, Field coached two years at UM (2007-08) on the defensive side of the ball, working with future NFL draft picks like Kenny Phillips, Tavares Gooden, Sean Spence, Darryl Sharpton, Brandon Harris and Allen Bailey.

Field was a two-time all-state selection at Palm Beach Lakes High, helping them to the only undefeated season in school history.He played tight end for two seasons at Tuskegee University. Field later earned a bachelor’s degree in business management from University of Phoenix, and a master’s degree in liberal studies from UM.