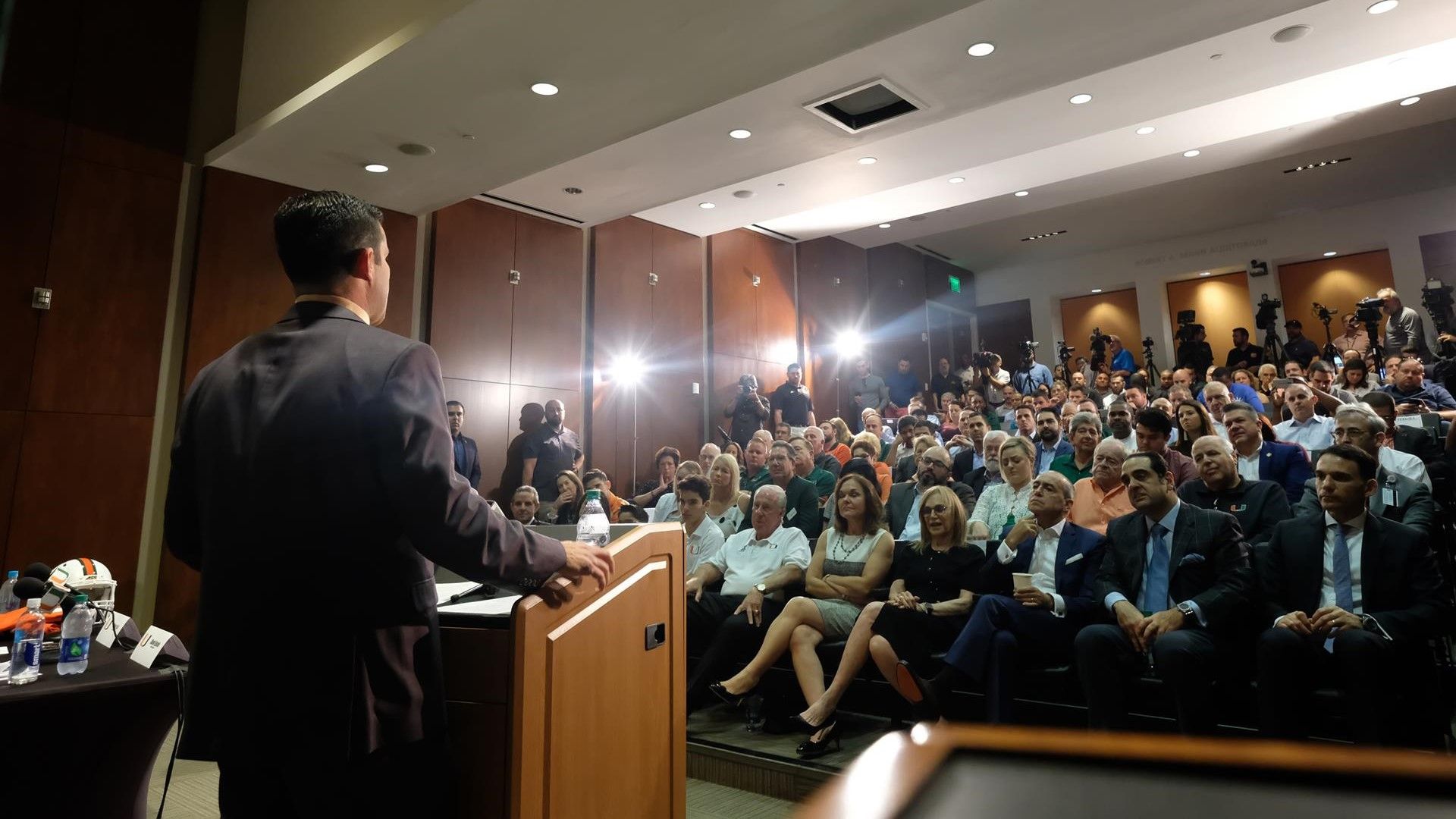 But the sun shined bright in Coral Gables Wednesday, as University of Miami director of athletics Blake James officially introduced Manny Diaz as the 25thhead football coach in program history. A Miami native, Diaz grew up idolizing the Hurricanes every Saturday at the Orange Bowl and Wednesday’s introductory press conference marked the perfect beginning for the Diaz Era.

“It’s actually January 2nd, 2019 – 35 years to the day since Miami won its first national championship vs. Nebraska,” Diaz said. “For the 9 year old kid who was up way past his bedtime and watched Kenny Calhoun bat that ball down and watched the Canes storm the field, the fact that I’m here standing in front of you right now, if you need more evidence that this is a ‘God’ story, that’s it. And when you combine the unusual events of this past weekend, certainly I believe that God’s hand was in this, and I want to thank him for the opportunity to stand before you today.”

The whirlwind events of the weekend were set in motion by Richt’s unexpected retirement on Sunday. James, David Epstein and the Board of Trustees immediately began the process of identifying potential candidates and Diaz’s name quickly climbed to the top of Miami’s wish list. That night, the deal was done and Diaz – who had been introduced as Temple’s new head coach on Dec. 19 – was announced as Richt’s successor.

Diaz, 44, has been coaching in college for over two decades, getting his first break as a graduate assistant in 1998 under Bobby Bowden at Florida State. His career blossomed at NC State under Chuck Amato, where he worked from 2000-05, until he was hired as the defensive coordinator at Middle Tennessee State prior to the 2006 season.

After four years at MTSU, Diaz continued his meteoric rise through the coaching profession when Dan Mullen hired him as defensive coordinator at Mississippi State in 2010. A year later, Diaz joined Mack Brown’s staff at Texas. In 2014, Diaz was the defensive coordinator at Louisiana Tech before reuniting with Mullen again at Mississippi State in 2015. Then Richt called and Diaz returned home to Miami, where he built the Hurricanes into one of the nation’s top defenses from 2016-18.

“I’d like to thank all the outstanding head coaches throughout my career that I’ve had the opportunity to work for,” Diaz said. “Every one of them teaching me something a little bit differently, to allow me to, when I finally had this opportunity, to craft my own philosophy to give myself the best chance for success. But more than any, I have to thank Mark Richt. He came to his alma mater three years ago and he leaves this place in much better shape than when he found it. 30 yards to my left sits the Carol Soffer Indoor Practice Facility. In my mind, there’s no way that that’s there today, there’s no way that that’s a reality, without the effort of Mark Richt. That was no small thing. That was no small endeavor. When you’re trying to lead a football team, and coach with excellence, and going through all the things that he had to do to make that thing not just be a reality, but to make it first-class and the best in the country…that was an amazing achievement and something that the university will forever benefit from, from his efforts. His selfless leadership was an example to everyone on our coaching staff and the players knew that it was their hearts that he was really after. He cares so much for this school and this program, and quite simply, he’s the best man I have ever worked for. His wife Katharyn was an amazing friend and mentor to everyone in our program. They will always be Hurricanes.”

A year ago, the Hurricanes posted their first 10-win season since 2003, played in the Orange Bowl for the first time in nearly 15 years and seemed poised to return to dominance on a national scale. But the 2018 Hurricanes had a disappointing 7-6 season that ended in a 35-3 defeat at the New Era Pinstripe Bowl just three days prior to Richt’s retirement.

“Now, 52 weeks ago, we were in a ‘New Year’s Six’ game,” Diaz said. “52 weeks ago. Obviously, this year at the University of Miami, we had a setback. Things can change quickly in football, in both directions, as we’ve seen. As all successful people know, success is not always linear. The way to grow is not always linear. I could call up different examples. Obviously we just had the playoff. We saw Notre Dame walk out of Hard Rock [Stadium] 13 months ago with their tail between their legs. This year, they’re one of the top four teams in college football, according to the playoff committee. Clemson University, under Dabo Swinney – in Dabo’s third year, they won six games. It took a reboot at Clemson. They haven’t won fewer than 10 since, and they’ve certainly been competing for championships. “There is precedent for things changing quickly in the world of college football. For that to happen, though, there has to be accountability. If we’re going to be who we say we are, and we’re going to hold our players accountable for their actions, then we know as coaches, that we have to be held by the same account. What happened this year was obviously not good enough at the University of Miami.”

Diaz knows that everyone needs to be better, from coaches to players, if Miami wants to get to where it wants to be as a football program. The Hurricanes will have new leadership atop their program in Diaz and he has already begun building a staff that will help him elevate the program to new heights.

“My first task is to hire an outstanding staff that’s ready to take Miami to another level, to the point where we are competing and in the mix for the College Football Playoff every year. That will start with the offensive coordinator,” Diaz said. “That’s obviously the most important hire.”

“We will have a fantastic offensive coordinator, a great quarterbacks coach and a great scheme,” Diaz said. “But first and foremost, none of that will win without great culture. We have got to get the culture of the football team united between all three phases.”

For as outstanding as Miami’s defense was in 2018, its offense was lackluster. The Canes ranked 105thnationally out of 130 FBS teams with 358.8 yards of total offense per game and were 66thin scoring at 28.8 points per game. But don’t think for a second that Diaz is placing the blame for Miami’s struggles solely on the offense. The first-year head coach holds everyone accountable and that mentality will resonate throughout the program.

“Everyone in this building has to own 7-6, starting with me,” Diaz said. “I’ll say that one more time: Everybody has to own 7-6. There’s not a blame to the people who were not retained on the staff as if it’s all their fault. If you wore the ‘U’ on the side of your helmet last year or you wore it over your heart on a coaching shirt, we are all responsible for the 7-6.”

“Therefore, it is all of our responsibility to do everything we can to make sure that never happens again. I do not want to have a tone set where certain guys can think they have status, certain guys can think ‘Well, that wasn’t on me.’ That is not true. It was on all of us. Everyone returns after winter break with no status. Everyone returns 0-0, which is a great thing about college football. We live in a different world every year. The 2018 football team is over. It’s finished. They will never be back in the room again. In about a week and a half when the team returns, the 2019 Miami Hurricanes football team will be born. What it does from that point on will be decided by their next step after that first initial meeting.”

Diaz emphasized the importance of living up to the standards of being a Miami Hurricane in his three years as defensive coordinator and he will certainly look to reestablish the culture of greatness in Coral Gables that he grew up watching in his youth.