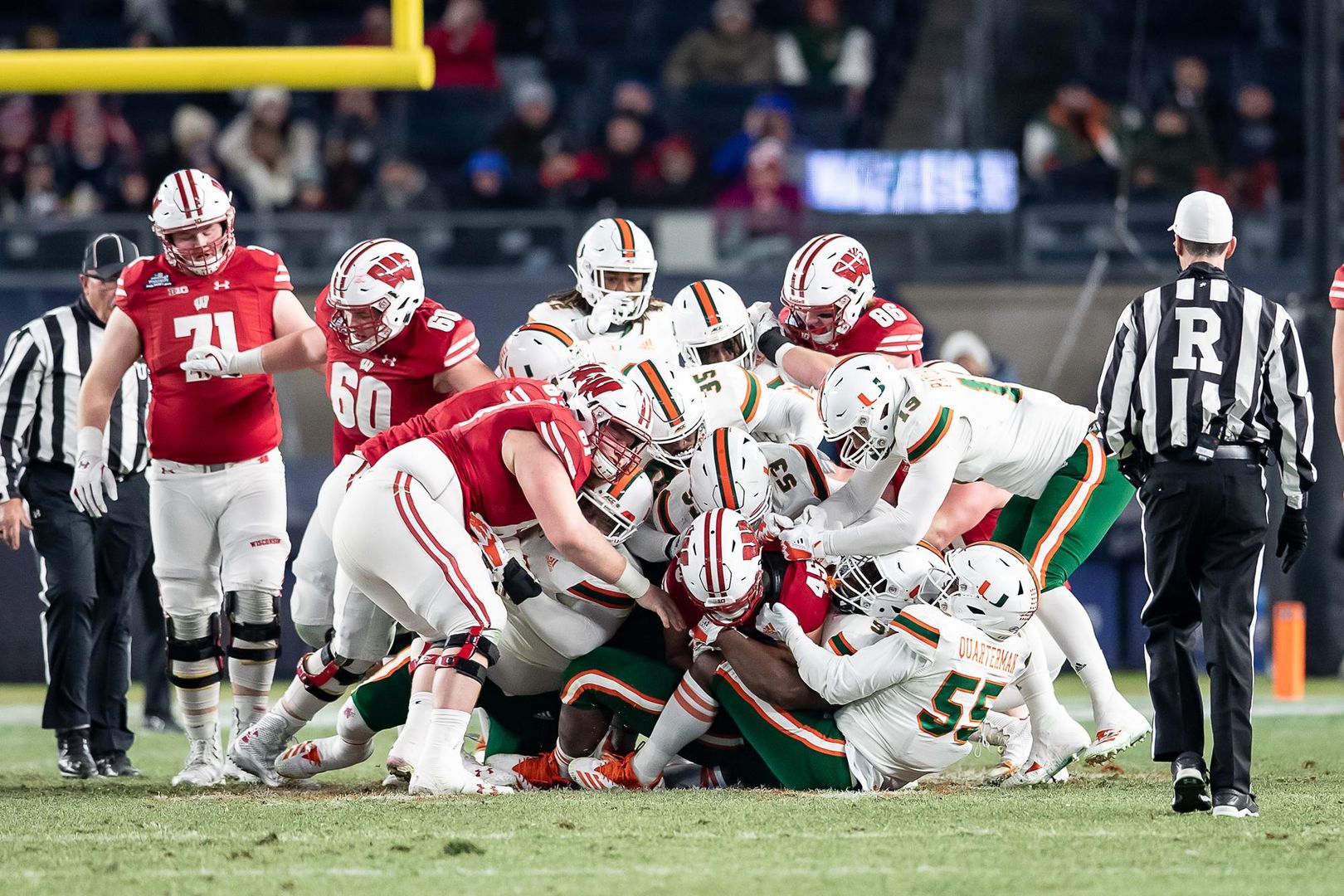 BRONX, N.Y. – The Miami Hurricanes dropped their final game of the 2018 season, falling to Wisconsin in the New Era Pinstripe Bowl, 35-3.

The Canes faced the Badgers in a bowl game for the second straight year and were hungry to avenge last year’s loss to Wisconsin in the Capitol One Orange Bowl. But All-American running back Jonathan Taylor posted a 205-yard rushing performance and Wisconsin’s defense forced five turnovers to ensure a 32-point victory at Yankee Stadium on Thursday.

The Badgers wasted little time showing they meant business, driving 65 yards in just 3:04 to take a 7-0 lead very early in the first quarter. Taylor carried the load early, amassing 28 yards on four carries, but it was sophomore Jack Coan’s 35-yard completion to Kendric Pryor that gave the Badgers their first touchdown on the night.

Wisconsin doubled its momentum when the Badgers’ Eric Burrell picked off Miami quarterback Malik Rosier on the Canes’ first play from scrimmage and returned the ball to the UM 7. One play later, Taylor ran into the end zone to make it 14-0 Wisconsin.

The Badgers drove into Miami territory on their third possession, reaching the UM 22 before senior safety Jaquan Johnson dove towards the Wisconsin sideline and intercepted Coan to give the Canes the ball on their own 7 yardline. Johnson wrapped up his Miami career with a team-high 13 tackles (eight solo), while Mike Smith added 10 tackles on the night.

On the next play from scrimmage, Rosier sprinted for a career-long 62 yards to the Wisconsin 30 to build off the momentum from the interception and get the Hurricanes into Badger territory for the first time in the game. Miami’s drive ended with a Bubba Baxa 33-yard field goal that cut into Wisconsin’s lead, 14-3, with 1:15 remaining in the opening quarter.

Miami’s defense got another stop on Wisconsin’s next drive, as the Badgers reached the UM 23 before UW’s Rafael Gaglianone missed a 41-yard field goal attempt wide left to give Miami possession of the ball on it’s own 23 with 10:54 left until halftime.

The Canes continued to shine defensively, sacking Coan twice and forcing a three-and-out. With the second sack, a four-yard loss by Michael Pinckney, Miami set the single-season record for tackles for loss in a season. The Canes finished with 10 tackles for loss on the night and closed out the season with a school record 136 TFLs. Miami’s previous record of 130 was set in 1999.

Wisconsin’s defense picked off Rosier a second time, as Chris Orr jumped in front of the redshirt senior’s pass to give the Badgers possession on the Miami 42. Miami’s defense held firm, as Gaglianone missed a 39-yard field goal attempt wide right and the Canes regained possession on their own 21.

But Miami turned the ball over for the third time in the first half, as Andrew Van Ginkel forced Travis Homer to fumble and TJ Edwards fell on the loose ball to give Wisconsin possession at the Miami 41.

Four plays later Wisconsin appeared to score a 20-yard touchdown from Coan to Luke Benzschawel, but a chop block penalty backed the Badgers up to the Miami 35 and resulted in Wisconsin punting two plays later to wrap up the opening half.

Miami forced a Wisconsin punt on the Badgers first possession of the second half and DeeJay Dallas gave Miami a spark with a 35-yard return to the Wisconsin 40. But the momentum was short-lived, as three plays later Rosier was intercepted for the third time in the game when Edwards jumped in front of a throw to give the Badgers the ball on their own 41.

Wisconsin converted the turnover into seven points, as Taylor had three carries for 57 yards before Alec Ingold rushed in from two yards out to give the Badgers a 21-3 lead with 3:36 left in the third quarter.

Redshirt freshman N’Kosi Perry replaced Rosier at quarterback for the Hurricanes on Miami’s next possession, but the Canes offense could not get much going and was forced to punt after losing four yards on three plays.

On Miami’s next possession, the Badgers forced their fifth turnover of the night as Perry’s pass intended for Brevin Jordan was intercepted by Caesar Williams to give Wisconsin the ball on Miami’s 34. Five plays later, Coan rushed for a seven-yard touchdown that gave the Badgers a 28-3 lead.

The Badgers added their fifth and final touchdown with eight seconds remaining in the game, as Taiwan Deal ran into the end zone from one yard out to wrap up the 35-3 victory.