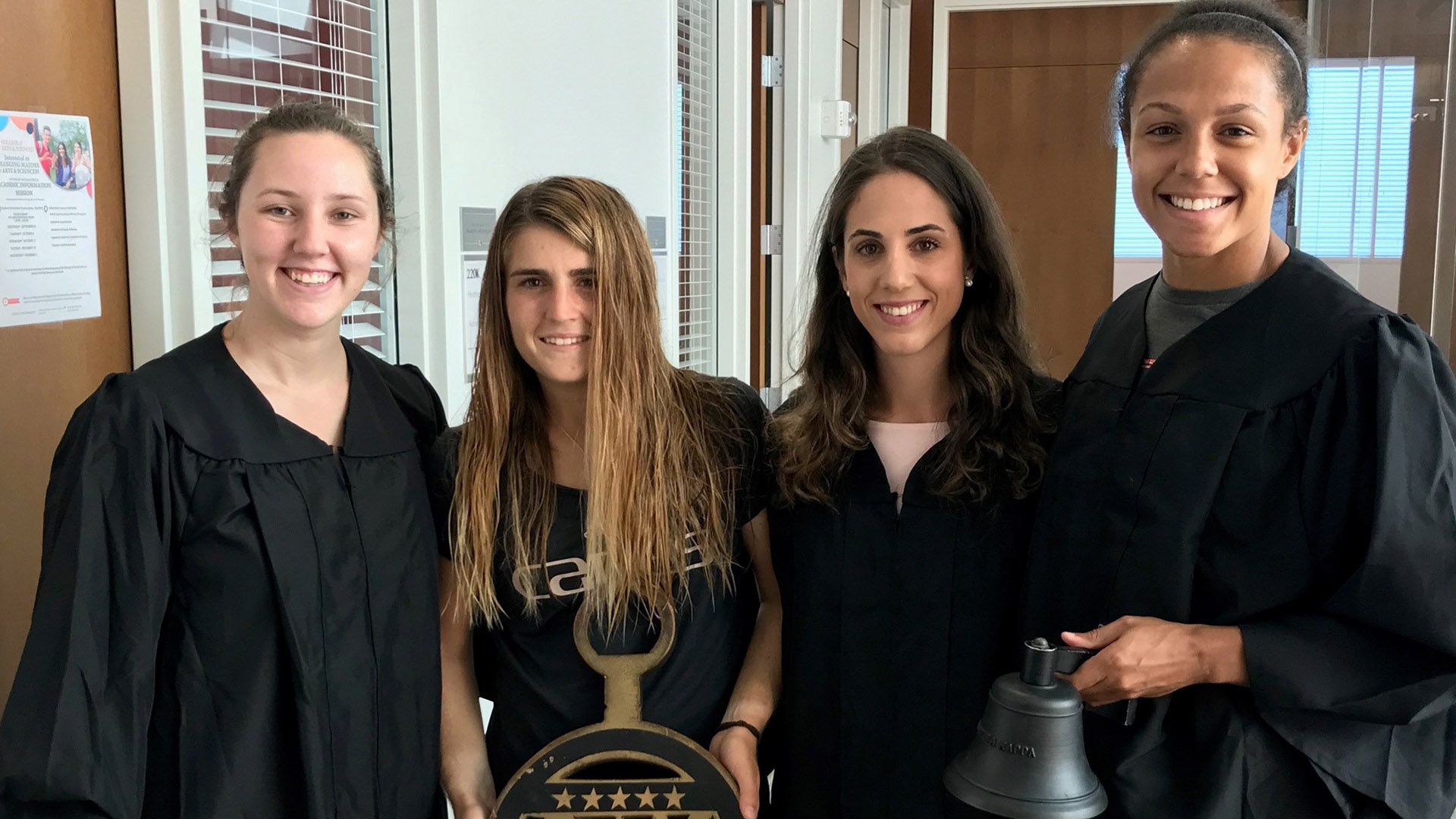 A Quartet of Canes Tapped into ODK

CORAL GABLES, Fla. – A quartet of University of Miami student-athletes have been tapped into the elite Omicron Delta Kappa (ODK) National Leadership Society.

“These students are to be celebrated for many contributions on campus, in the classroom and in their sport,” Miami Senior Associate Athletic Director of Academic Services David Wyman said. “Estela, Dane, Laura and Kolby are tremendous ambassadors for the U and are deserving of such a high honor.”

A redshirt junior, Cornelius has been lights-out from beyond the arc during her collegiate career, currently sitting atop the UM all-time career 3-point percentage leaderboard with a .397 (91-of-229) mark. The guard has twice accomplished a feat no other Hurricane in UM history has ever achieved, going a perfect 6-for-6 from long-range, most recently against Pittsburgh on Jan. 2, 2017.

The Groningen, Netherlands, native has made the Book Buster Club (minimum 3.0 GPA) in all six of her collegiate semesters, as well as Dean’s list (minimum 3.5 GPA) honors five times. Majoring in public health, Cornelius has earned President’s Honor Roll (4.0) accolades once and has been a member of the ACC Honor Roll in each of her first three seasons.

A redshirt junior, Dunlap has registered 25 singles victories and 31 doubles victories in his collegiate career. Last spring, he went 15-7 in doubles action, while capturing a 6-2 mark and Bedford Cup title during the Fall of 2017, alongside graduate Christian Langmo.

The Washago, Ont., Canada, native is majoring in business technology and is Vice President of the Student-Athlete Advisory Committee (SAAC). He has made the Athletic Director Honor Roll (minimum 3.2 GPA) in all six of his collegiate semesters, as well as earned Dean’s list (minimum 3.5 GPA) accolades five times. The redshirt junior was honored as an Intercollegiate Tennis Association Scholar-Athlete in July of 2018.

Currently ranked third nationally, Perez-Somarriba is the reigning ACC Player of the Year, as well as a two-time ITA All-American and two-time First Team All-ACC honoree. The Madrid native reached the NCAA Final Four in 2016, becoming the first freshman in program history to do so, and won the 2017 ITA National Player to Watch award. This fall, she won the elite Oracle ITA Masters tournament and earned the back draw title at the Riviera/ITA Women’s All-American Championships.

Perez-Somarriba has made the Provost’s Honor Roll (minimum 3.75 GPA) in all four of her collegiate semesters, as well as earned President’s Honor Roll (4.0) accolades twice. She is a two-time All-ACC Academic Team honoree and sports an exceptional 3.97 GPA as an economics major.

An outside hitter, Bird has reached double-digit kills in eight consecutive matches, leading the Canes to a 12-6 (8-3 ACC) mark during the 2018 season with six matches remaining in regular season action. Throughout her career, the senior has tallied 734 kills, which ranks 16th in the program’s all-time record book. In a five-set thriller over in-state rival Florida State, Wednesday night, Bird registered 15 kills, three blocks and an ace to lead the Hurricanes to victory.