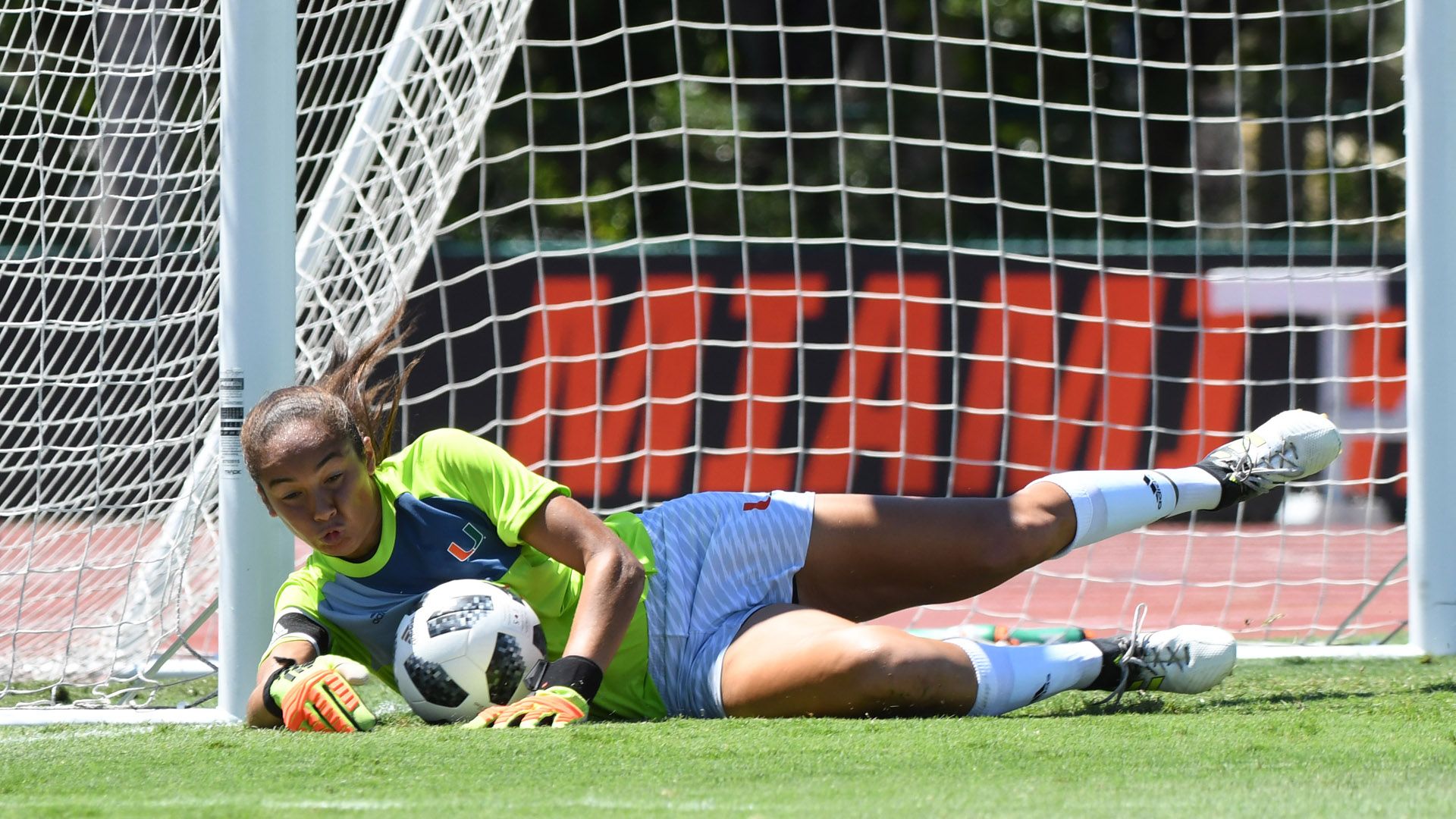 In a match played at the Koka Booth Stadium at WakeMed Soccer Park, Tullis-Joyce set a new program mark with 17 saves in the match.

The Shoreham, N.Y., native began her impressive tally with back-to-back incredible saves off of a UNC corner in the fifth minute. Making the initial save off of a blast from Bridgette Andrzejewski, still on the ground, the redshirt senior blocked Brianna Pinto’s shot.

In the 10th minute, Dorian Bailey sent a line drive towards the bottom right post, but again Tullis-Joyce was up for the challenge, making the diving save.

Following a couple big defensive stops by senior Maisie Baker, Tullis-Joyce again was challenged by Pinto, and similar to earlier in the match, the redshirt senior was able to corral in the ball.

With four minutes remaining in the opening stanza, UNC’s Zoe Redei banged a chip-shot off the far post and it rolled down the back of the net, giving the Tar Heels a 1-0 lead.

Out of the break, the Tar Heels continued to apply the pressure, as Tullis-Joyce registered her eighth save of the match, just 50 seconds into the second half, to tie her then-season-high.

In the 59th minute, Andrzejewski sent a well-timed ball towards the awaiting foot of Sydney Spruill who was able to tally a goal and increase the UNC lead to two goals.

Looking to counter, freshman forward Mallory Olsson found sophomore forward Michelle Giamportone at the top of the box, who blasted a shot that was blocked by a UNC defender in the 59th minute.

In the 65th minute, Tullis-Joyce matched her then-career-high with her 10th save of the contest when she made a run off of her line to register an incredible one-on-one save against Sydney Spruill in space.

In the 70th minute, freshman forward Gudrun Haralz was dragged down just outside the 18-yard box, setting up a free kick opportunity for the Hurricanes.

Off of the free kick, Kristina Fisher sent a beautiful line drive towards the bottom left post, however the junior midfielder just pushed the ball wide of the net.

Off of a Tar Heel header by Madison Schultz in the 73rd minute, Tullis-Joyce collected her 247th career save, to surpass Rachel Elsby for third on the Canes’ all-time list.

With back-to-back saves in the 83rd and 84th minute, the Shoreham, N.Y., native talled her 14th and 15th stops of the match to set a new program record for saves in a contest. The 15 saves bested Vikki Alonzo’s mark of 14, which she registered on Nov. 2, 2008 at North Carolina.

Determined to not allow the Tar Heels to get another goal in the match, Tullis-Joyce made an incredible diving save in the 87th minute to set up a corner, before collecting her 17th stop of the match, off a blast by Julia Ashley.

Tullis-Joyce’s 17 saves ranks first in the ACC, surpassing Sydney Wootten of NC State, who registered 16 against Florida State on Oct. 13.

Overall, the redshirt senior has 78 saves on the season and 252 in her illustrious career heading into Thursday night’s regular season finale against No. 14 Florida State at Cobb Stadium.