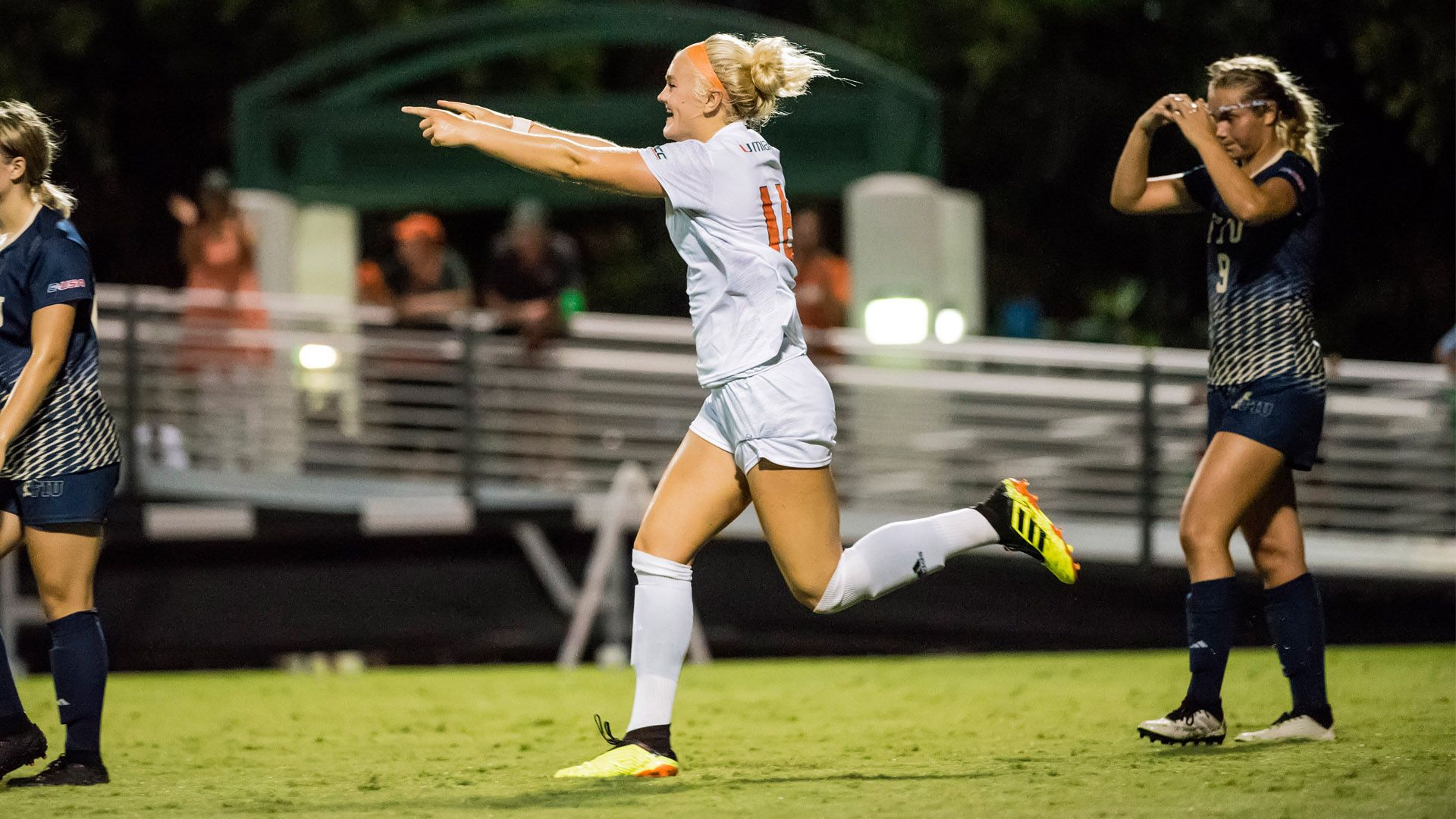 Freshman forward Mallory Olsson tallied her third goal of the season, while redshirt-senior goalkeeper Phallon Tullis-Joyce registered a season-high eight saves, as Miami moved to 5-7-3 on the season and 2-4-1 during ACC action.

“I hope that the team sees that this is what we are capable of. And I think this is really a good step in the right direction, in terms of realizing our potential,” said head coach Sarah Barnes. “I think we created really good chances. And although they had several chances as well, I thought we created really clear chances, right in front of the goal–not off of set pieces and run of play situations. It’s unfortunate that we conceded a really soft penalty, because I thought there was a huge error on that. But, what I like about the team is that when you make that mistake, it would be really easy to drop your head and let your performance drop. But we continued to fight and compete, and that is a sign of a really good team.”

Looking to get on the board in the 19th minute, freshman forward Gudrun Haralz sent junior defender Bayleigh Chaviers in stride down the right sideline, before the Stephenville, Texas, native was dragged down just outside the penalty box.

Off of the free-kick, junior midfielder Kristina Fisher sent a beautiful cross towards the head of sophomore forward Michelle Giamportone who finessed a shot towards the bottom right corner. In goal for the Eagles, Alexis Bryant made an impressive diving save to keep the match scoreless.

In the 24th minute, Chaviers sent a cross towards Haralz, who directed a shot on target, but again Bryant was up for the challenge,

Seeing her first action of the night, Tullis Joyce corralled in a shot from Boston College’s Jenna Bike.

Five minutes later, the Hurricanes committed a foul in the 18-yard box, setting up a penalty kick opportunity for the ACC leading scorer, Sam Coffey.

Off the line, Tullis-Joyce guessed correctly, but the ball just out-stretched her fingertips, which hit the back of the net, placing the Eagles in front, 1-0.

With less than a minute remaining in the opening half, Giamportone drilled a shot on net, but Bryant made her third save of the half.

Out of the break, Tullis-Joyce acted as a brick wall making her second save of the match, in the 48th minute, off a shot by Kayla Jennings.

Eight minutes later, the redshirt senior again made a big play, when she stopped a blast from Coffey.

Off of a BC corner at the 58:39 minute mark, Miami countered with Rachel Sorkenn finding space in the Eagles’ defense, resulting in a one-on-one goal scoring opportunity with Bryant. The redshirt freshman forward aimed her shot towards the bottom left post, but Bryant was able to make the play.

In the 63rd minute, Coffey again looked to place the Eagles in the driver seat, but with a shot curling towards the back post, Tullis-Joyce stretched out to make the incredible play.

In the 71st minute, a pair of freshmen connected when Sammy Neyman sent a perfectly placed 50 yard bomb towards the awaiting foot of Olsson.

Making a move past a Boston College defender, the Crystal Lake, Ill., native drilled a shot towards the left upper-ninety, evening the match at one.

Two minutes after recording her fifth and sixth saves in the 75th minute, Tullis-Joyce extended out and punched a ball out of play, which looked to be curling towards the upper-ninety, for her season-tying seventh save of the match.

After neither team was able to record a shot during the final 10 minutes of regulation, the Hurricanes entered extra-time for the fifth time this season and second time during ACC play.

Miami received its first extra-time goal-scoring opportunity in the third minute of the fourth stanza and 103rd overall, when Haralz received a pass in front of the goal from Olsson. Looking for her eighth tally of the season, the freshman’s shot was saved by Bryant.

On the defensive end, in the 105th minute, junior defender Lexi Castellano blocked a shot from Bike, while Tullis-Joyce recorded her, season-high, eighth save of the night, off of a shot from Coffey.

The tie marked the first for the Hurricanes during ACC action since Sep. 28, 2014, when Miami drew with Louisville, 1-1.

Up next, the Hurricanes will hit the road for a pair of matches, beginning Thursday at 7 p.m. against NC State. Miami will then close out regular season road action with a Sunday afternoon matchup at third-ranked North Carolina.