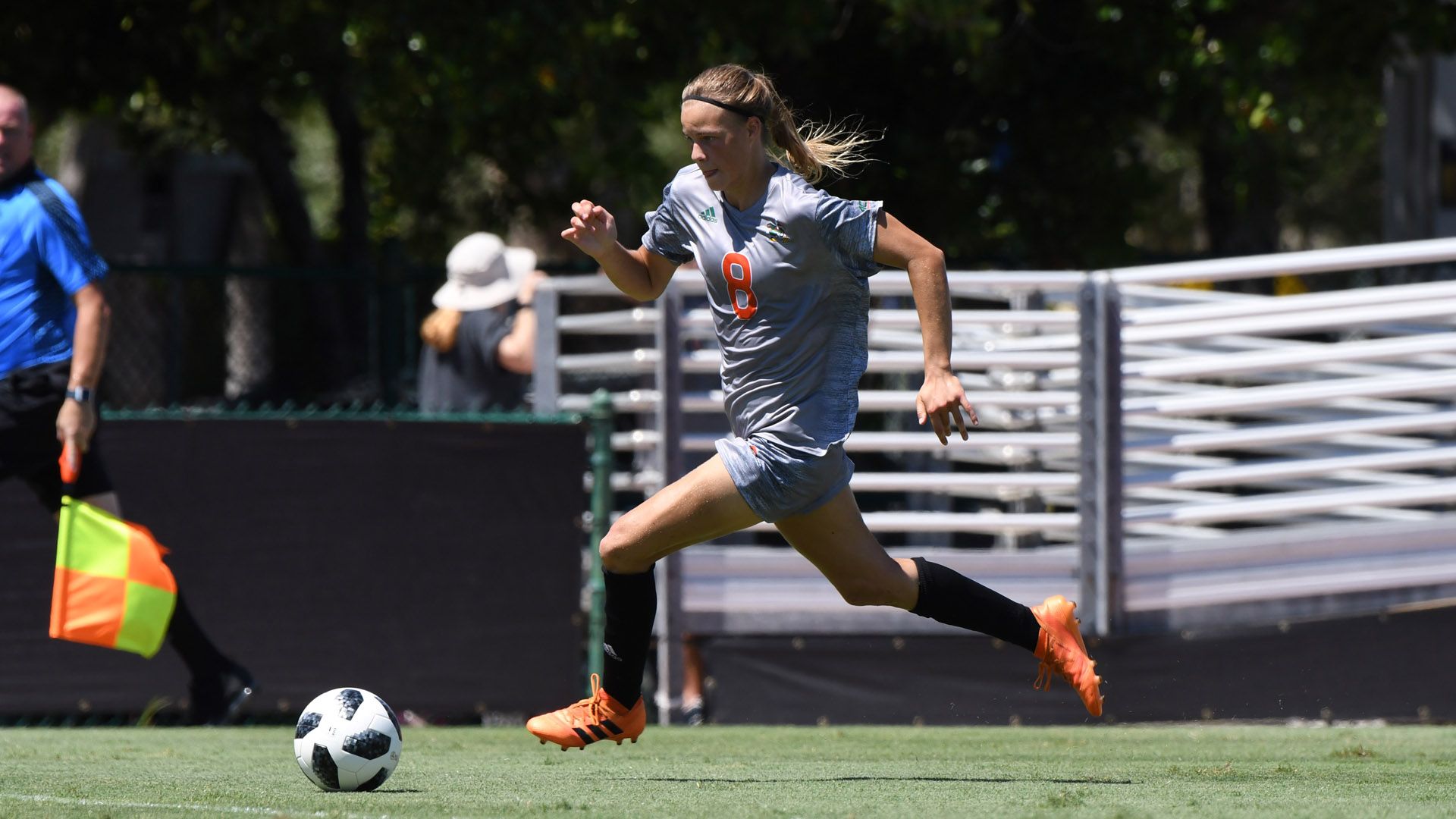 PITTSBURGH – On a breezy October night in western Pennsylvania, the University of Miami soccer team rallied back to defeat Pittsburgh, 3-2.

Freshman forward Gudrun Haralz registered her first collegiate hat trick, as the Hurricanes dug themselves out of a 2-0 hole at the end of the first half to claim their second consecutive ACC victory.

“I’m really happy with the way the team fought back tonight,” head coach Sarah Barnes said. “Obviously, the first half didn’t go the way that we thought it would go, but in the second half, the team was focused. I thought there urgency and sharpness improved and they did something that is really tough to do and would have been easy to give up on, but they fought all the way to the end. So, I am really proud of the way they went about taking care of their business and happy they got the reward for it.”

In the fifth minute of action, Haralz looked to get Miami on the board first when she received a beautiful cross from junior defender Bayleigh Chaviers. The freshman directed the header towards the bottom right corner, but Katherine Robinson was able to make the diving save.

In the 19th minute, Aideen O’Donoghue registered the Panthers’ first shot on goal, but redshirt senior goalkeeper Phallon Tullis-Joyce was able to corral the ball in.

Six minute later, junior midfielder Kristina Fisher made a move past a pair of Pitt defenders and blasted a shot from right outside of the 18-yard box, however Robinson was in a position to make the play.

In the 42nd minute, the Panthers converted when Mariona Segales connected with Ashley Moreira for the first goal of the match.

A minute later, sophomore forward Michelle Giamportone quickly looked to level the match. However, Robinson was up for the challenge, collecting her third save of the half.

With 27 seconds remaining in the opening half, O’Donoghue received a well-timed ball at the six-yard box and blasted a shot towards the bottom right corner to give the Panthers the commanding two-goal lead heading into the break.

At the start of the second half, UM came out firing on all cylinders with junior defender Dejah Cason notching her first shot three minutes into the half, but Amaia Pena, who was subbed in for Robinson, was able to make the save.

In the 52nd minute, the Canes finally found the back of the net when Cason made a run down the left sideline and sent a cross towards the head of Haralz. The freshman blasted a shot past the Pitt keeper for the goal.

In the 71st minute, Chaviers blasted a shot that looked like it was set to even the match, however Pena made an incredible play to punch the ball out of harm’s way.

After resting for nine minutes, Haralz returned to the match at the 77:36 minute mark.

Forty seconds later, Chaviers sent a through-ball to the freshman forward in space, setting up a one-on-one goal-scoring opportunity with Pena. The Canes’ leading scorer made a move past the keeper and buried the ball into the back of the net to even the match at two.

In the 88th minute, junior defender Lexi Castellano looked to make her presence felt on the attack, blasting a header towards the bottom left corner. Pena, however, was up for the challenge, knocking the ball out of play for a Miami corner kick.

Off of the corner, Fisher sent a perfectly placed ball towards the head of Castellano, who this time blasted the shot straight at the keeper who was unable to maintain possession.

With the ball left unguarded, Haralz drilled the ball towards the back of the net to give Miami a lead it would not look back on.

With the goal, Haralz became only the second UM student-athlete to register a hat-trick in the second half of play, matching Laura West record set against Florida Atlantic on Aug. 30, 2000.

Up next, the Canes will travel to Kentucky on Sunday for a matchup against Louisville at noon.