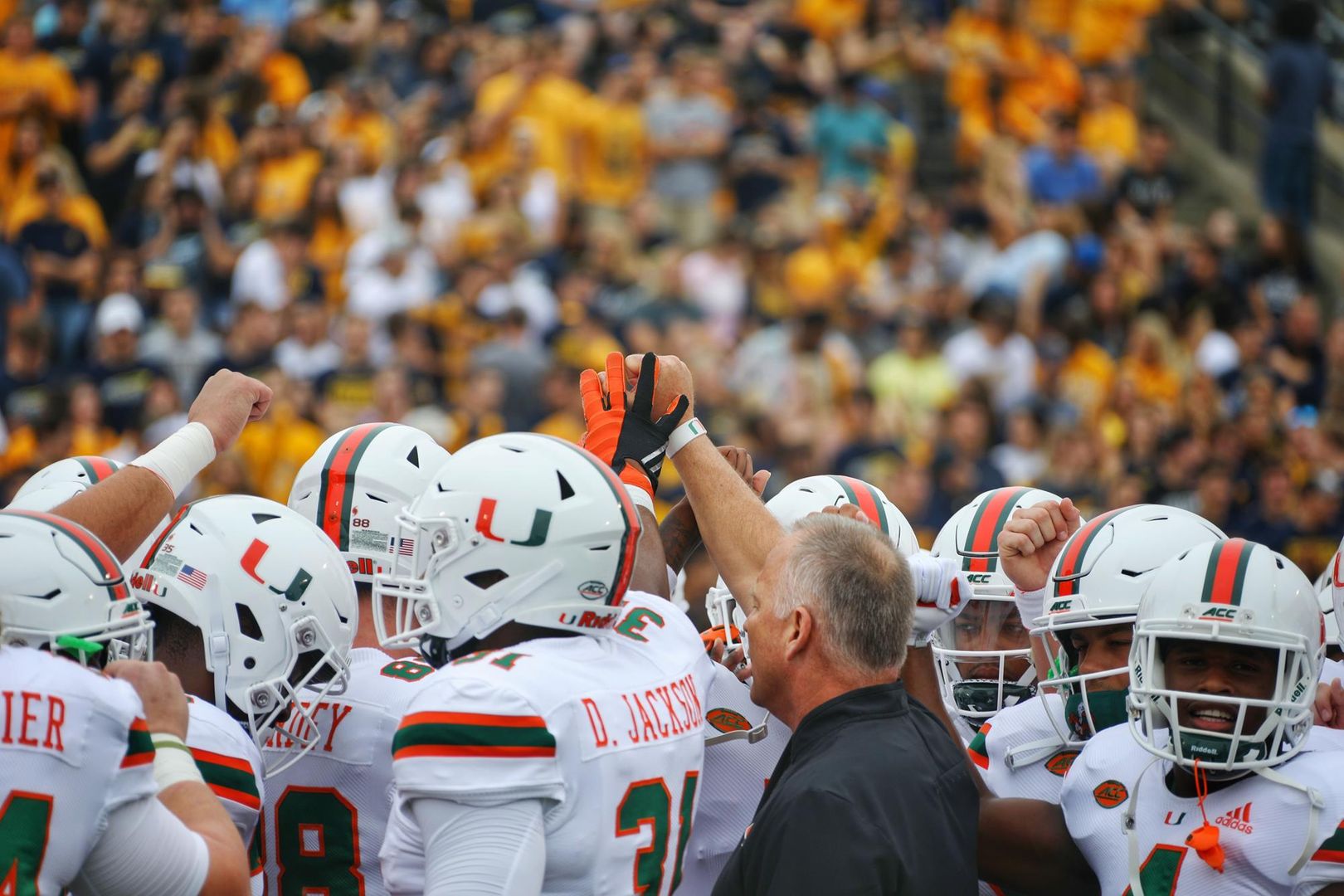 TOLEDO, Ohio – The Miami Hurricanes came to Toledo, Ohio for the biggest home game in the history of Toledo football and they left with a 25-point victory, 49-24.

The Canes (2-1) were dominant for most of Saturday’s sold-out game against Toledo (1-1). Redshirt senior quarterback Malik Rosier led Miami’s offense to its second-straight game with at least 49 points scored and became the first Miami player to rush for three touchdowns and throw for two touchdowns since the Hurricanes joined the ACC in 2004.

The Hurricanes’ defense kept the crowd of 28,117 at the Glass Bowl quiet for most of the game, combining for 13 tackles for loss, four sacks and an interception while holding Toledo’s explosive offense to just 24 points and 334 total yards.

After forcing Toledo to punt on its first possession, the Hurricanes imposed their will on the Rockets on their first possession. The Canes methodically drove down the field for a 12-play, 76-yard scoring drive that was Miami’s longest scoring drive of the season by play count. The Canes got big plays from wide receivers Darrell Langham and Jeff Thomas, but it was quarterback Malik Rosier who ran into the end zone from five yards out to give the Canes a 7-0 lead.

On its third possession, Toledo got into Miami territory for the first time. But the Canes’ defense stuffed quarterback Michael Guadagni on fourth-and-1 from the Miami 45 to turn the ball over on downs.

The Rockets’ defense bounced back after Miami’s opening drive, forcing the Canes to go three-and-out on their next two possessions. But the Hurricanes were back in sync on their first drive of the second quarter, needing only five plays to go 61 yards with Rosier connecting with Thomas for a 38-yard touchdown that put the Hurricanes ahead, 14-0, with 12:27 left in the opening half.

Toledo looked like it was about to get on the scoreboard with 7:39 remaining in the first half, but Jameson Vest missed a 42-yard field goal attempt and the Hurricanes took over possession on their own 25.

Rosier gave Miami a 21-0 lead when he rushed for his second touchdown of the day, a two-yard run, to wrap up a seven-play, 58-yard scoring drive. The touchdown run gave Rosier his first-career multi-rushing touchdown performance.

The Rockets got on the scoreboard 37 seconds before halftime, when Guadagni connected with Diontae Johnson for a three-yard touchdown. Linebacker Shaquille Quarterman deflected the throw, but the tipped ball landed in Johnson’s hands to cut Miami’s lead to 14, 21-7.

Miami’s defense was outstanding in the opening half, combining for nine tackles for loss, three sacks and three pass breakups. The Hurricanes were especially good against the run, holding Toledo to 2.9 yards per carry and 64 total rushing yards.

Defensive tackle Gerald Willis had two tackles for loss and was one of three Canes to record a sack, joined by safety Sheldrick Redwine and defensive end Scott Patchan.

The Rockets got within one score less than five minutes into the second half, as running back Art Thompkins rushed for a five-yard touchdown to cap a seven-play 81-yard scoring drive. One play earlier, Thompkins took a wheel route 31 yards to get deep in Miami territory and set up Toledo’s second score of the day.

Rosier and Thomas connected for another big play on the Canes’ next possession, as the redshirt senior quarterback dropped a pass over Thomas’ left shoulder for a 41-yard gain to the Toledo 19. The catch set a new career-high for Thomas with five and put him over 100 receiving yards for the third time in the sophomore’s career.

One play later, DeeJay Dallas rushed 19 yards for a touchdown to silence a resurging Toledo fan base and give the Canes a 28-14 lead with 8:34 remaining in the third quarter. Dallas finished the game with a career-high 110 rushing yards and a score.

The Rockets answered back quickly, as Guadagni hit Johnson for a 40-yard touchdown that brought Toledo back within a touchdown, 28-21. Toledo used just 55 seconds on its third scoring drive, covering 65 yards after freshman kicker Bubba Baxa’s kickoff landed out of bounds to open the possession.

But Miami’s offense would not be denied on the next drive, converting three third downs and a fourth down to charge 70 yards down the field for a touchdown. Rosier tossed his third passing touchdown of the game, finding Lawrence Cager for a five-yard score that put Miami back up 14, 35-21, with 1:28 left in the third quarter.

The Rockets were within striking distance to open the fourth quarter, looking at a second-and-3 from the Miami 30. But the Hurricanes’ defense held firm and forced Vest to kick a 47-yard field goal that brought Toledo within 11 points, 35-24.

The Canes had another key third down conversion on their next possession, as Rosier threw a dart to Cager for a 32-yard gain to move the Hurricanes to the Toledo 40. Two plays later, Rosier kept the ball on a run-pass option and ran 37 yards for his third rushing touchdown of the game to put Miami up, 42-24. He is the first Hurricane to score five touchdowns in a game since Brad Kaaya threw four touchdowns and rushed for a score against Pitt on Nov. 5, 2016.

Miami’s defense took the ball back on the Toledo’s next play from scrimmage, as sophomore Trajan Bandy picked off Guadagni to give the Canes the ball on the Toledo 35. It was Bandy’s second interception of the season and the second time he wore the turnover chain in 2018.

The Canes turned the touchdown into seven points when Trayone Gray finished off a six-play scoring drive with a one-yard rushing touchdown that closed out the scoring for the day, 49-24.

Senior safety Jaquan Johnson led the Canes with seven tackles (four solo), despite missing the entire second half due to injury. Mike Smith added six tackles (two solo), while Willis, Redwine, Quarterman and linebacker Michael Pinckney each had five tackles. Willis led the Canes with three tackles for loss, while Pinckney had a pair of tackles for loss and a sack. The Hurricanes also finished the game without recording a penalty.