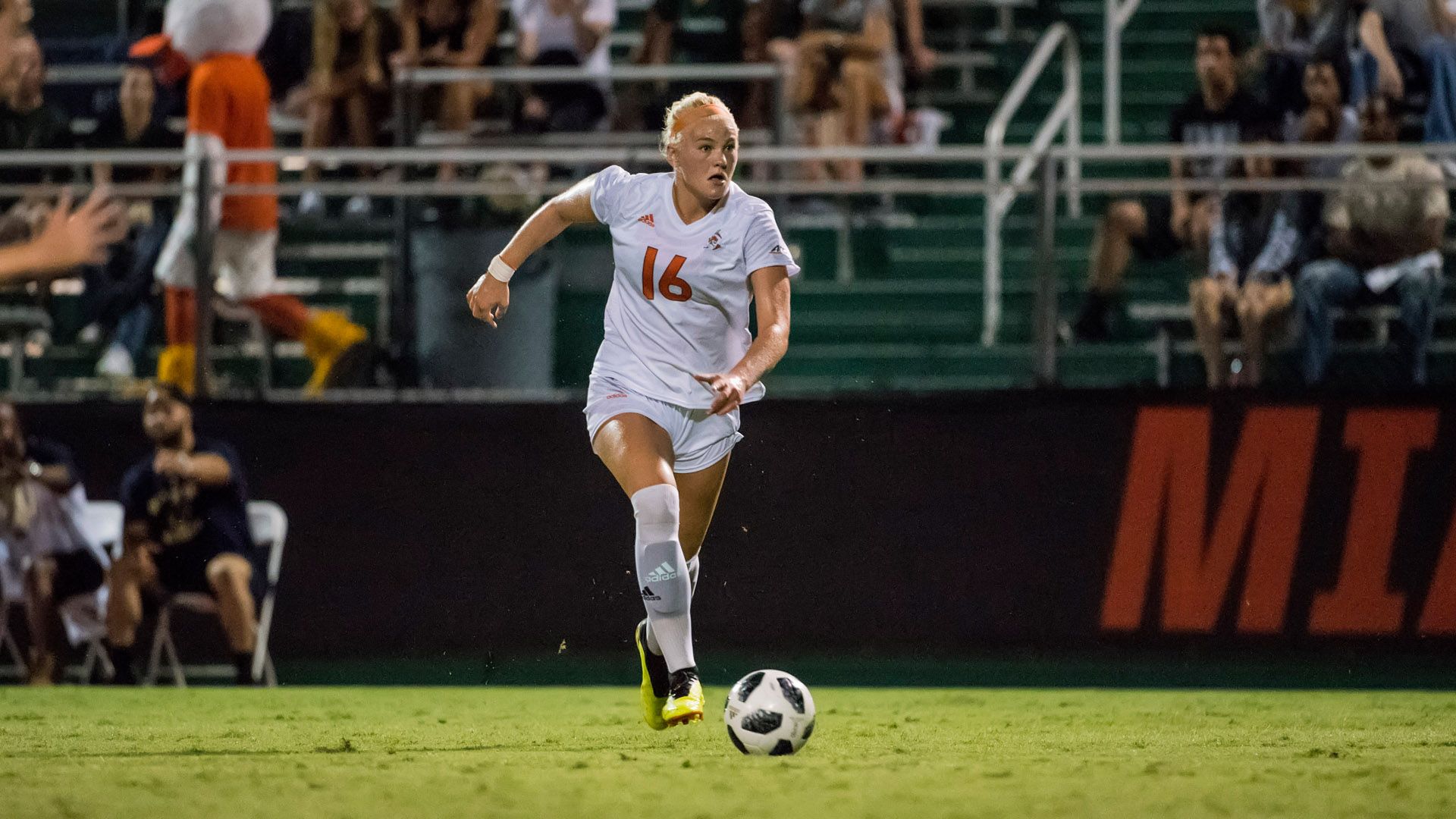 Canes Fall in Overtime at Clemson, 2-1

“I thought there were some high points today, and certainly there was an opportunity to walk out at least with a point. So it’s a disappointing result,” head coach Sarah Barnes said. “I think at the end of the day, there were some things defensively that we did very well to frustrate them and a couple of easy fixes that will help us continue to develop and be effective in conference play. But, at the end of the day, we have to do a better job of keeping possession, when we win it. We work so hard to win it, but we have to keep it to mount an attack. And if we start putting those things together, then we will be a much more effective team.”

In the 15th minute, Miami had its first goal-scoring opportunity when sophomore midfielder Tia Dupont received a throw-in pass from junior defender Bayleigh Chaviers down the right sideline. Dupont sent a cross toward the right foot of freshman forward Gudrun Haralz, who attempted to flick the ball past Clemson goalkeeper Sandy MacIver, but pushed it just wide of the net.

Eight minutes later, Dupont again connected with Haralz, who sent a one-timer toward the goal. As the ball closed in on the net, it continued to curve, just scraping past the left post, out of play.

In the 28th minute of action, the Tigers were awarded a penalty kick. MacIver stepped up to the spot looking to give Clemson the early lead. Guessing correctly, with a dive toward the right post, Miami goalkeeper Phallon Tullis-Joyce watched as the ball rolled past her, wide of the net.

In the 31st minute, sophomore midfielder Alexa Ferreira blasted a shot from 30 yards out, which was beautifully directed toward the upper left corner. However, MacIver dove and punched the ball out of play.

In the final minute of the opening stanza, Jamie Brunworth stepped up to take a free kick from 35-yards out. The senior midfielder, on her birthday, sent a perfect pass toward the head of Mallory Olsson, who was able to bring the ball down to her right foot. The freshman forward then aimed the ball toward the bottom left corner, pushing it past the keeper for her second-career goal.

Miami entered the locker room leading, 1-0, while Clemson held the advantage in shots, 8-5.

In the 51st minute, Miranda Weslake received a through-ball from Kimber Haley, setting up a one-on-one opportunity with Tullis-Joyce. The Clemson redshirt senior finessed the ball into the back of the net to tie the match, 1-1.

In the 79th minute, Tullis-Joyce, who finished with five saves, made an incredible diving stop, as a shot from Brooke Powers was heading for the upper-90.

In the 95th minute, off of a Clemson corner kick from Sam Staab, Mariana Speckmaier headed the ball into the back of the net to seal the victory.

Up next, Miami will return to Cobb Stadium for a trio of ACC matchups, beginning with No. 13 Duke on Thursday, Sept. 20 at 7 p.m.