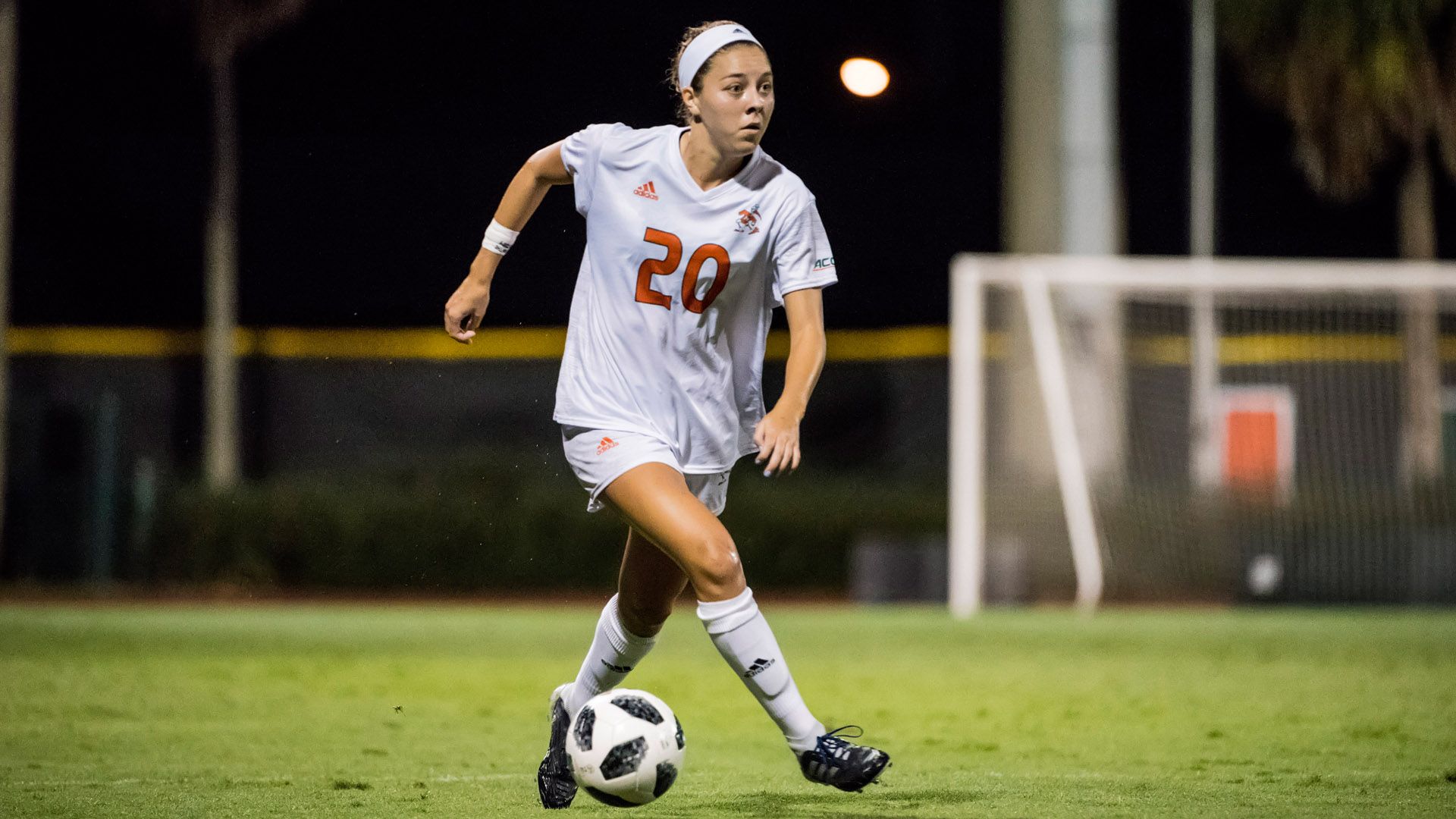 The Hurricanes (3-3-0) held the Knights scoreless through the first half of play, but were unable to overcome a late penalty kick goal.

“I thought we definitely deserved to get a result tonight. We created a number of chances,” head coach Sarah Barnes said. “Unfortunately, we made a mistake and they capitalized on it. And when we had ours, we didn’t. The bottom line is we had to be better a little bit better in both boxes.”

In the sixth minute of action, UCF’s Dina Orschmann collected the match’s first shot but redshirt senior goalkeeper Phallon Tullis-Joyce was in position to make the save.

In the 14th minute, UCF (1-2-0) again found space, but junior defender Dejah Cason caught up to the ball and cleared the ball out of harm’s way, preventing the goal-scoring opportunity.

In the 29th minute, junior midfielder Kristina Fisher tallied Miami’s first shot of the match, but UCF’s goalkeeper Vera Varis was able to make the save.

Junior defender Bayleigh Chaviers later found space down the right sideline and sent a cross towards the head of Michelle Giamportone. The sophomore made contact with the ball, but the shot barely sailed wide of the post, leaving the match scoreless through 33 minutes of action.

Off of a setup from junior midfielder Lauren Markwith, Giamportone again found herself in front of the Knights’ goal, this time with the ball at her feet. Taking a shot towards the net, Varis stepped in front and knocked the shot out of play for a corner.

At the half, Miami and UCF found themselves at a stalemate.

Tullis-Joyce collected a pair of saves in the opening fifteen minutes of the second half to keep the Knights off of the board.

In the 67th minute, Chaviers again found space along the right sideline, before sending a cross towards the top of the six. Varis quickly leapt off of her goal line and snagged the ball out of the air to prevent the Canes’ goal-scoring opportunity.

Two minutes later, off of a miscue, a UCF forward intercepted a pass and earned a breakaway towards Tullis-Joyce before she was dragged down by a Miami defender to set up a penalty kick.

Off the kick, Zandy Soree aimed the ball towards the bottom right corner just sneaking the ball past the fingertips of Tullis-Joyce, as UCF took a 1-0 lead at the 69:05 mark.

With 14 minutes remaining in regulation, UCF’s Carrie Lawrence put a hand in front of a cross collecting a yellow card on the play and setting up a UM free kick from 25 yards out. Moments later, Fisher received a through ball and earned a 1-on-1 with the keeper, but was unable to get the ball past Varis.

With only a second remaining on the clock, Kristen Scott tallied the Knights’ second goal of the match to seal the victory.

Tullis-Joyce ended the afternoon with a season-high six saves.

“I thought the team played remarkably better then we have all season long,” Barnes said. “We just have to continue to grind and improve. I think, at the end of the day, the biggest thing for us is that we have to make sure we bring this performance to every single opponent that we play, while also continuing to improve.”

Up next for Miami is a trip north in the Sunshine State for a pair of matches, the first of which is set for Thursday at 7 p.m., against Jacksonville at Southern Oak Stadium.