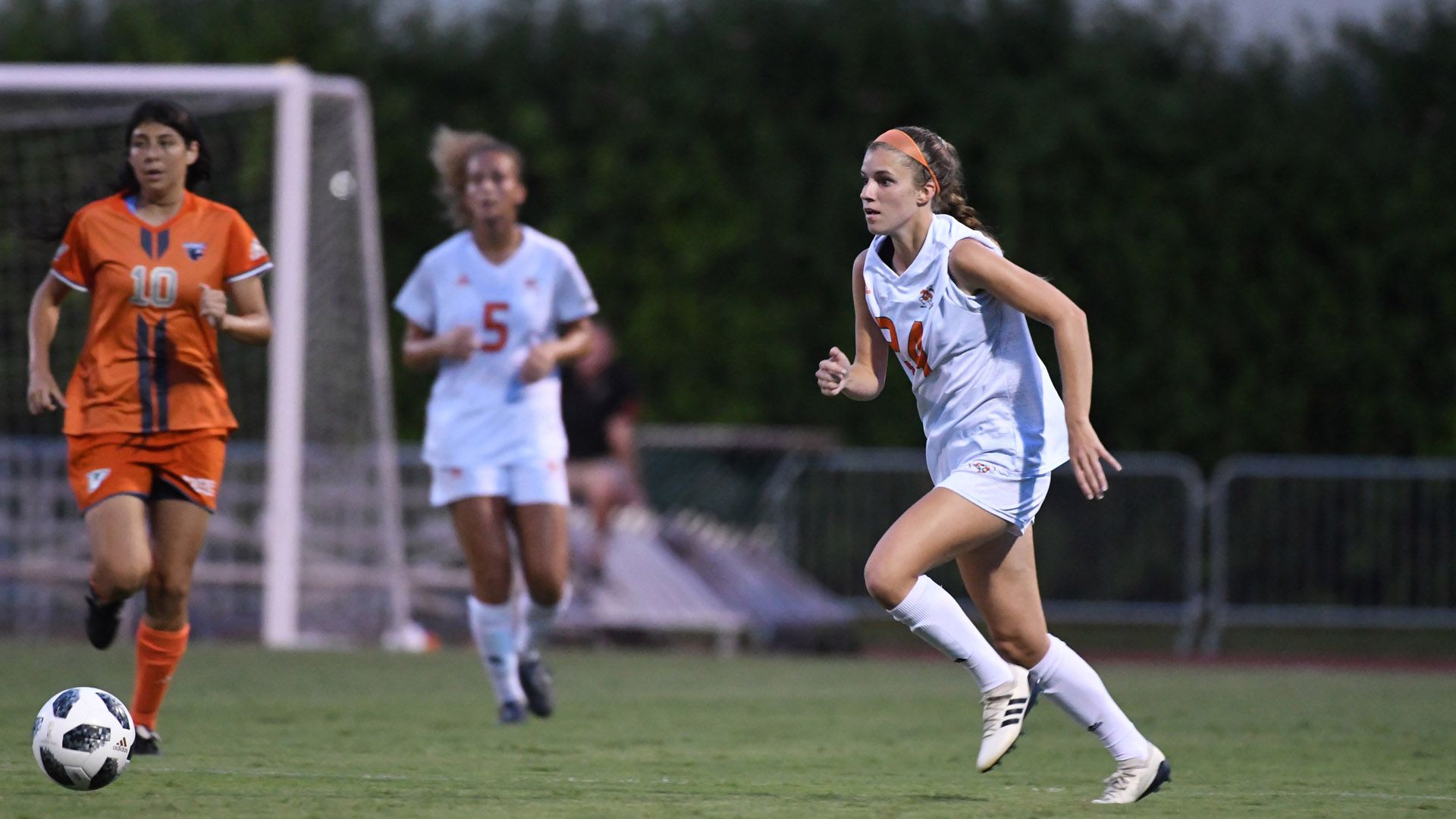 Soccer Falls in Overtime Against UTRGV

CORAL GABLES, Fla. – On a stormy evening, the University of Miami soccer team fell in overtime, 2-1, Thursday night at Cobb Stadium to The University of Texas Rio Grande Valley.

“I don’t think [the rain] affected us that much,” head coach Sarah Barnes said. “I just think we have to do a better job recognizing what opposing defenses are giving us and we have to make proper adjustments. We did not do a good enough job of that tonight, from the top down.”

The Hurricanes (3-2-0) opened the match controlling possession, as they looked to find space on the outside. Sending several balls towards the box, UM was unable to make contact with the ball, as both teams remained without a shot through the first 15 minutes of action.

In the 16th minute, the Vaqueros (3-2-0) were the first to strike when Sarah Bonney’s shot sailed wide of the net.

Forcing a turnover in the midfield, Maisie Baker found herself racing towards the goal but a UT Rio Grande Valley defender stepped in front of the senior’s shot to prevent the goal-scoring opportunity.

Miami continued to create chances, with Kristina Fisher collecting a rebound just to the right of the goal, but the junior forward’s attempt just missed wide of the target.

In the 41st minute, UTRGV’s junior goalkeeper Kinga Szemik ran out to clear the ball out of harms way, but redshirt-freshman forward Rachel Sorkenn’s foot connected with the ball at the same time causing the ball to ricochet to the right. The ball rolled to the right foot of sophomore Morgan Asmussen who finessed the ball into the back of the net.

The goal was the first of Asmussen’s career and the seventh first half goal of the season registered by the Hurricanes. Overall, Miami holds a 7-1 advantage in the opening half of play, through the first five games this year.

“Morgan did well. She’s come in and given us a little bit of a burst of energy and her quickness has been helpful,” Barnes said. “So, obviously it was great to see her score her first [collegiate] goal.”

In the 71st minute, the Vaqueros tied up the match, 1-1, when freshman Emily Zapata connected with junior Diana Ansah off of a cross, which the junior was able to finish.

Looking to break away, UM found themselves with seven shots and four corners in the final 13 minutes of regulation, but were unable to get past Szemik.

In the 85th minute, off of a corner from senior captain Jamie Brunworth, the ball bounced in front of the net, as a UM foot connected with the ball sending it into the back of the net. But a foul was called, waiving off the possible match-winner.

A minute later, Sorkenn blasted a shot towards the top of the crossbar, but Szemik stretched out and punched the ball out of play.

With the match remaining all tied up at 1-1, play resumed with two 10 minute overtime periods.

With golden goal rules in affect, UTRGV’s Zapata found herself on a breakaway, and pushed the ball past redshirt senior Phallon Tullis-Joyce, as UTRGV claimed the victory.

Miami ended the contest with 15 shots, compared to UTRGV’s eight, but the Vaquero’s held a 5-4 advantage in shots on goal. The Hurricanes collected 10 corners on the night, in comparison to UTRGV’s one.

The Canes return to Cobb Stadium Sunday at 6 p.m., when they host [RV] UCF.