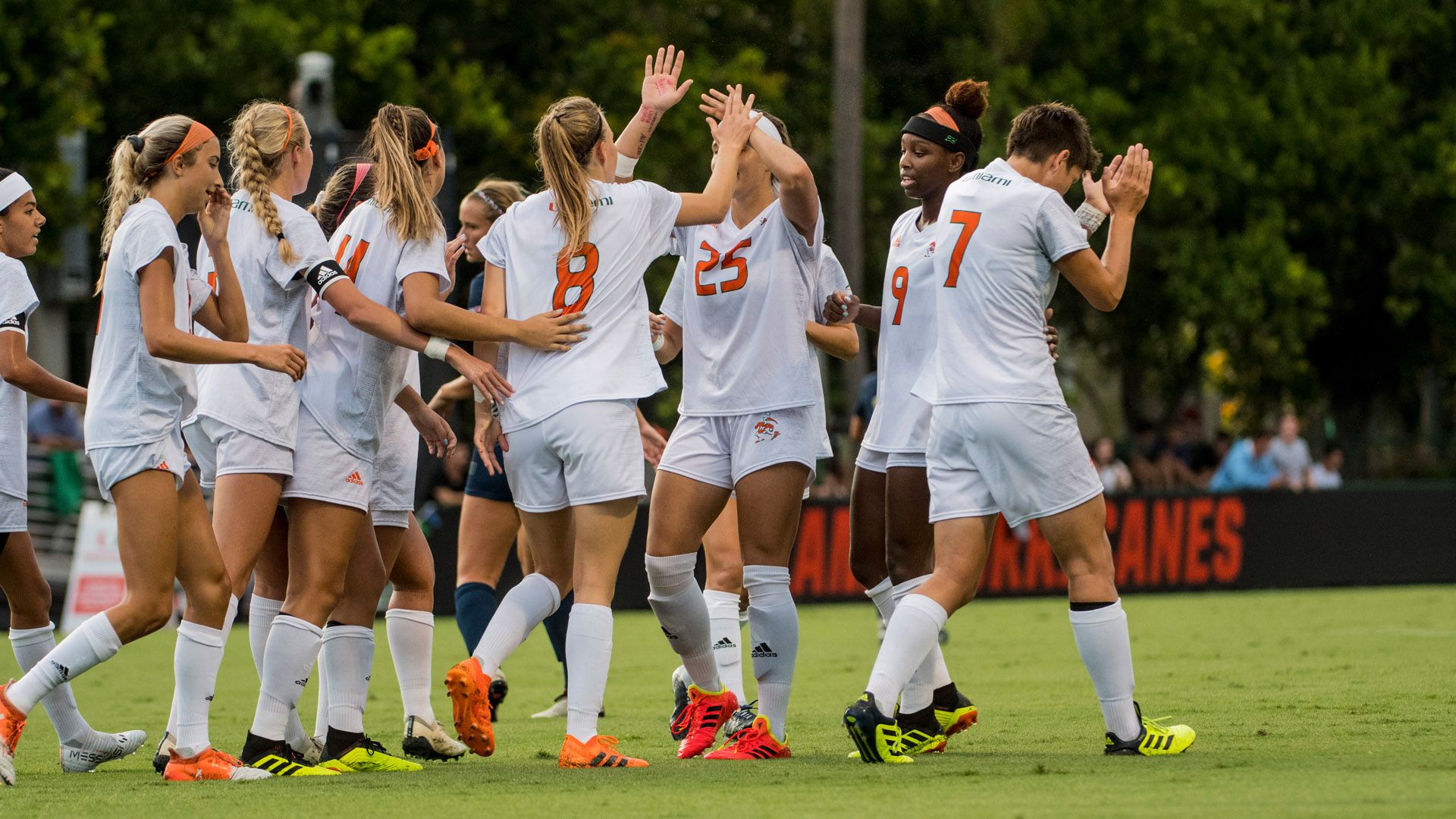 CORAL GABLES, Fla. – Playing in front of a boisterous home crowd, the University of Miami soccer team picked up a victory against its crosstown foe Sunday night, notching a 4-1 decision over FIU.

Miami (2-0-0) dominated play for the majority of the evening and used a trio of first-half goals to pull away and record the win at Cobb Stadium in its first home contest under first-year head coach Sarah Barnes.

“I thought we controlled the pace. We obviously were able to get a lot of people in, which is great from an experience stand point. The last 20 minutes of the game we had seven freshmen in,” Barnes said. “You know, I am disappointed to give up a goal, but they need that experience and will learn from that. I thought we circulated the ball pretty well and created some good goal scoring chances. So pretty pleased with the offensive side of things.”

Following a four-point performance in her first collegiate action Friday night against FAU, freshman forward Gudrun Haralz again found herself on the score sheet, this time in the seventh minute. Sophomore midfielder Tia Dupont set up the play by finding open space down the left sideline, before drilling a low cross to Haralz’s feet. The native of Iceland took a touch and buried it into the bottom right corner for her second career-goal to give the Canes an early 1-0 lead.

For the next 23 minutes of action Miami dominated possession, outshooting the Panthers, 11-0.

Coming off the bench in the 27th minute, redshirt-freshman Rachel Sorkenn did not hesitate to make her presence felt, finishing a shot off a throw-in to place the Canes in front, 2-0. On the play, Dupont collected her second assist of the contest and junior defender Dejah Cason tallied her first assist of the season.

With a minute remaining in the opening half Miami was awarded a free kick from 25-yards out, following a yellow-card given by the official to FIU’s sophomore midfielder Angel Breedlove.

Off the free-kick, junior midfielder Kristina Fisher drove one across the box to the awaiting head of junior defender Lexi Castellano who was able to find the back of the net for the second goal of her collegiate career. The goal placed the Hurricanes up, 3-0, heading into the break.

In the 50th minute, redshirt senior goalkeeper Phallon Tullis-Joyce faced her first shot on net, denying the FIU goal-scoring opportunity and recording her first save of the 2018 season.

Ten minutes later, a pair of freshmen connected to register the fourth goal of the night for Miami. On the play, defender Sierra Frey sent in a beautiful pass towards forward Mallory Olsson who guided it past the keeper.

In the 66th minute, FIU decreased the lead to three, following a breakaway by redshirt-sophomore forward Ashley Adams who dribbled the ball passed Tullis-Joyce and finessed the ball into the back of the net.

Freshman goalkeeper Tyler Speaks made her collegiate debut, subbing in for Tullis-Joyce in the 77th minute. The late game substitution marked the first time since Aug. 28, 2016 in which the redshirt-senior did not played a full match.

In the 84th minute, Speaks collected her first-career save, denying a close-range blast by freshman defender Torrie Taylor, as the Canes held on to win the match, 4-1.

Miami finished the match with a 30-7 edge in shot attempts, including a 19-2 advantage in the first half. The Hurricanes also had 11 shots on goal and conceded only three, as well as taking 13 corners, in comparison to FIU’s one.

The 30 shot attempts were the most by Miami since the same game Tullis-Joyce did not play a full contest on Aug. 28, when the Hurricanes downed Jacksonville, 7-0, with 34 shot attempts.

“I thought the kids were pretty patient and we were able to move their defenders around and manipulate them enough to be able to get players in pretty wide open situations,” Barnes said. “You know, we didn’t force a lot of balls into their pressure, and that is half the battle. If you can do things uncontested, then you are going to be in pretty good shape.”

The victory marked Tullis-Joyce 20th career win to take sole possession of fourth-place all-time among Hurricanes, and one behind Cane Lauren McAdam for third.

Up next for the Hurricanes is a trip to Nashville, Tenn., for a pair of matches in the Music City Invitational, the first of which comes Aug. 24 at 8:30 p.m., against Vanderbilt.