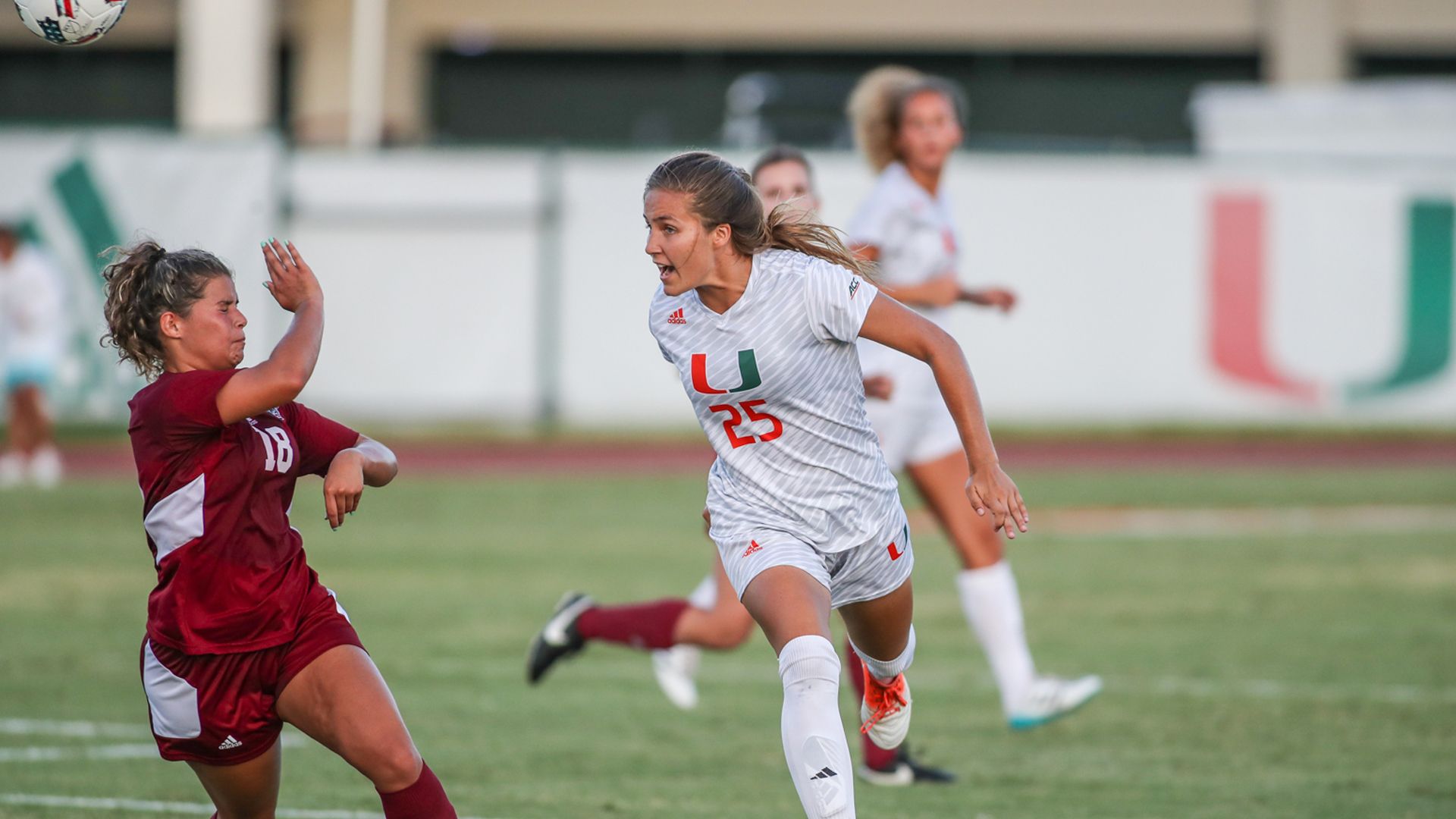 CORAL GABLES, Fla. – Coming off a road win in its season opener, the University of Miami soccer team will welcome crosstown foe FIU to Cobb Stadium Sunday night at 6:30 p.m.

This will be the 14th all-time meeting between the two sides, with Miami holding an 8-4-1 series edge, including a 6-1-1 mark since 2002. The Hurricanes have tallied multiple goals against the Panthers seven times and have held FIU scoreless on five occasions.

Miami enters the contest following a 3-2 triumph over FAU Friday evening in the first match of the season. Sophomore forward Michelle Giamportone and freshman forward Gudrun Haralz led the way for the Hurricanes, with Haralz notching a goal and assisting both of Giamportone’s goals in the match.

For FIU, Sunday’s affair will be its second match of the year, after dropping Friday’s home opener against Stetson, 2-0.

Last season, the Canes made the short nine-mile trip across town to Miami, where they defeated the Panthers, 2-0. Junior midfielder Kristina Fisher tallied three points in the contest, posting an assist on the team’s first goal, before putting the game out of reach in the 88th minute with a goal.

Miami finished the match with a 25-7 edge in shot attempts, including a 16-3 advantage in the second half. The Hurricanes also had nine shots on goal and conceded only three, as well committed just nine fouls, compared to FIU’s 21.

The Miami-Dade County showdown will streamed live on ACC Network Extra and can be found HERE, while live stats for the action are available HERE.

As is the case with all home matches, entry to Sunday night’s contest is free to all fans. A barbecue will be provided for the first 250 fans to arrive at the field, while Vuvuzelas will be handed out to the first 300 students and will be available at the marketing table, which will also have team posters.

The University of Miami – Coral Gables Campus has introduced an updated parking policy for the 2018-19 school year. Enforcement is now extended to seven days a week, just 8:00 a.m. to just 11:00 p.m. PayByPhone and additional pay stations are available across all campus parking lots and garages to facilitate visitor parking.

Following their contest against the Panthers, the Hurricanes travel to Nashville, Tenn., for a pair of matches in the Music City Invitational, the first of which comes Aug. 24 at 8:30 p.m., against Vanderbilt.