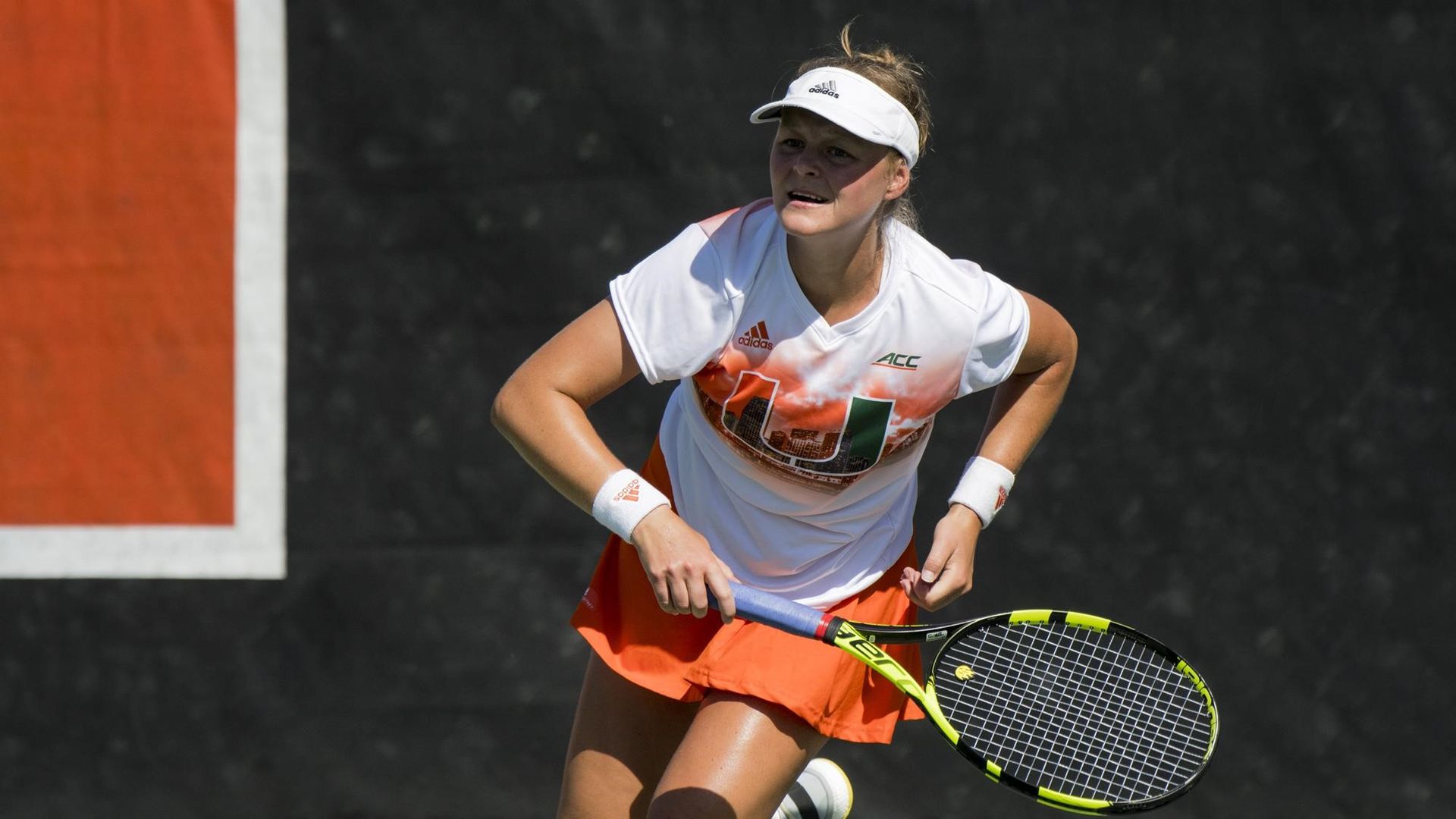 CORAL GABLES, Fla. – The University of Miami women’s tennis team turned in a dominant performance Friday afternoon at the Neil Schiff Tennis Center and earned a 6-1 win against Boston College.

No. 18 Miami (11-6, 7-3 ACC) logged all four the necessary points to clinch the match before the Eagles got on the board and then added two more to reach six for the second time in 2018.

“I thought we came out and played good doubles. We spoke today about working on a couple things,” Miami head coach Paige Yaroshuk-Tews said. “I talked to the girls before the match about if they find themselves in comfortable situations score-wise to put in the mental work and put themselves in some uncomfortable situations. I think I saw that take place on some of the courts. We knew that the physical work would take care of itself and we needed to put in the metal work, which I think we did.”

The Hurricanes quickly took control of doubles play against Boston College (11-8, 3-7 ACC), winning the first eight games across the three courts and racing out to a 4-1 lead on each of them.

Sophomore Dominika Paterova and freshman Ulyana Shirokova, ranked No. 88, got on the board first, downing Elene Tsokilauri and Jackie Urbinati, 6-2.

Senior Sinead Lohan and junior Ana Madcur, ranked No. 82, followed with a 6-1 triumph over Asiya Dair and Natasha Irani to clinch the opening point.

When play stopped, the No. 66 duo of sophomore Estela Perez-Somarriba and junior Daniella Roldan held a 5-3 edge against Dasha Possokhova and Kylie Wilcox.

The lone ranked matchup was the first singles contest to conclude, as sixth-ranked Perez-Somarriba topped No. 89 Dair, 6-2, 6-1. With the win, the Madrid native improved to 18-1 on the spring with half of her victories over top-90 players.

Moments later, No. 75 Lohan finished off a superb showing against Wilcox, recording a 6-1, 6-2 triumph to move to 5-1 in her last six outings.

For the second match in a row, Shirokova, the reigning ACC Freshman of the Week, clinched the victory for Miami, posting a 6-2, 6-2 triumph over Ross.

The Eagles registered their lone point of the afternoon when Urbinati finished off a 6-0, 6-3 defeat of Madcur.

Paterova logged her second straight 6-3, 6-3 result, this time beating Tsokilauri to give Miami its second-to-last point.

“I’m really happy with Domi right now, stepping into the lineup in singles and just battling and being a warrior. That’s how I know she knows how to play,” Yaroshuk-Tews said. “That’s the type of energy that we need to be put into the lineup. If we’re going to be putting kids in and taking kids out, when those kids reenter our lineup, they need to come in with a certain level of energy and she’s done that. It’s going to be important that she keeps that up moving forward.”

With the victory, the Hurricanes are now 25-1 all-time against Boston College, including 18-0 on their home court.

Sunday, Miami will again be in action at the Neil Schiff Tennis Center, when it squares off with No. 25 Syracuse at 11 a.m.