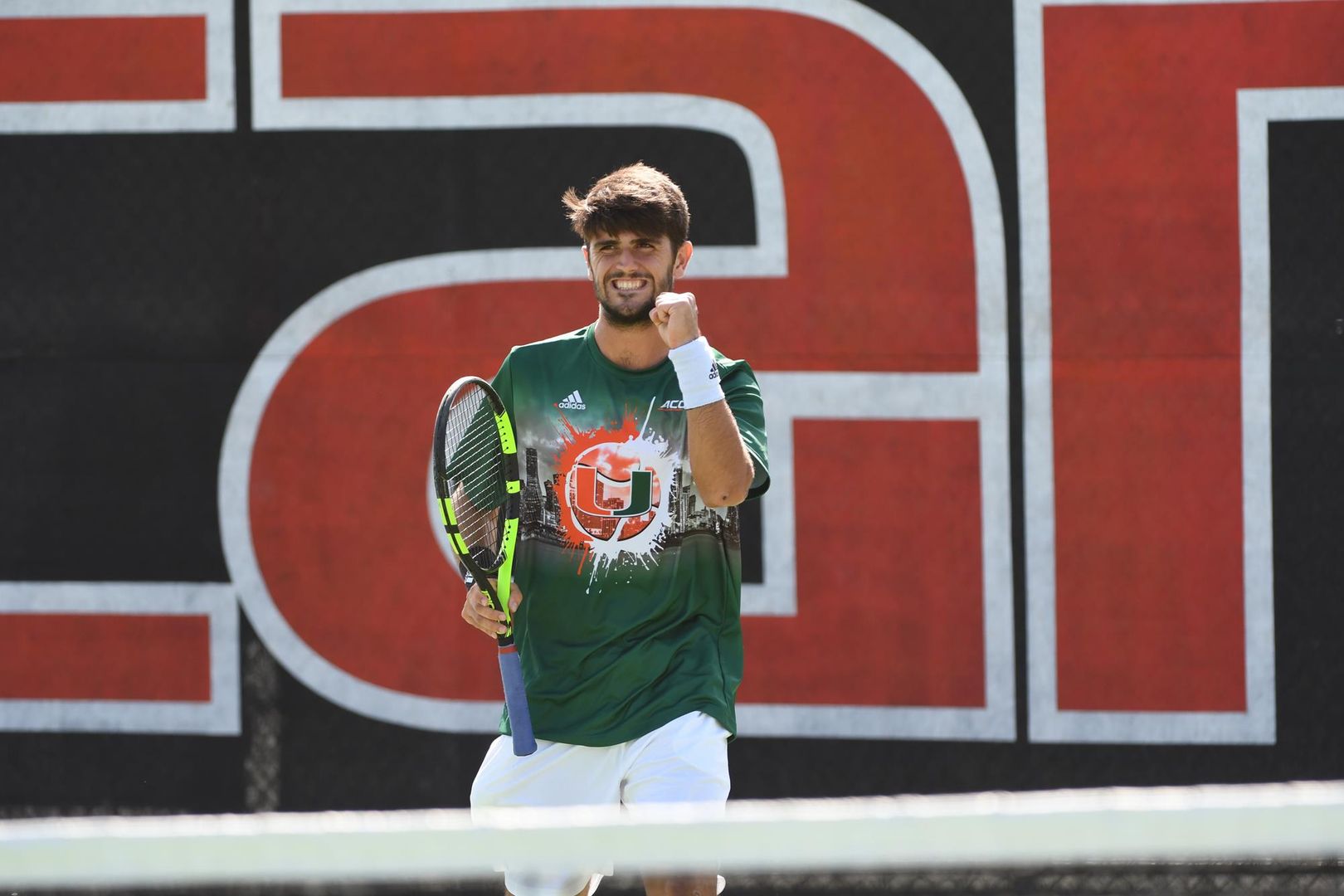 It took two comeback victories and a third-set tiebreaker in the decisive match, but it was finally the Hurricanes (9-7, 1-4 ACC) who were on the winning end of a 4-3 outcome after freshman Bojan Jankulovski completed a comeback against Georgiy Malyshev, 1-6, 6-2, 7-6 (7-5), to clinch the victory. Not that he knew it, until he got swarmed by his teammates.

“This was a great team win,” Miami head coach Aljosa Piric said. “There is no easy way to get through any match that remains on our schedule. What a good way for Boki to clinch and have a little breakthrough for our team. We’ve got to keep moving and we have a couple of tough matches next weekend and an opportunity to come back here and take this momentum forward.”

“I believe this is what college tennis is about,” the hero Jankulovski said. “This win is going to give us a lot of confidence for the future ACC matches. We were so close in every match, we had a couple of tight 4-3 losses, especially Wake Forest, the No. 1 team in the country. That shows us that we are right there, that we have quality. We just have to believe and trust in ourselves and the results will come.”

The Skopje, Macedonia, native recovered after winning only one game in the opening set to clinch his team’s first victory against top-25 opposition since March 21, 2014, when the Hurricane downed then-No. 18 Wake Forest by the same margin.

The Wolfpack (11-5, 1-4 ACC) took the doubles point, even though Miami’s 50th-ranked pair of freshman Adria Soriano and senior Christian Langmo defeated the brother duo of No. 53 Igor and Ivan Saveljic, 6-3, on the main court.

Tadas Babelis and Malyshev gave NC State the lead by downing freshmen Pablo Aycart and Tatsuki Shimamoto, 6-3, at the No. 3 position shortly after the Wolfpack’s other ranked duo – No. 63 Michael Ogden and Alexis Galarneau – downed
Jankulovski and redshirt sophomore Dane Dunlap by the same scoreline.

Miami earned the victory with wins in the top four singles positions, including Jankulovski at No. 4. Soriano started things off by defeating No. 24 Galarneau – NC State’s only ranked singles player – 6-4, 6-2 in his debut at the top of the lineup. For Soriano, who started the spring at the No. 3 position, this was second top-30 victory in as many matches, improving him to 3-1 against ranked opponents. After winning his fourth straight singles match, the freshman now has the longest active win streak by a Hurricane.

Ivan Saveljic gave the Wolfpack a 2-1 lead with a 6-4, 7-5 win over Shimamoto, but Dunlap returned to the win column with a comeback victory over Babelis – 4-6, 6-2, 6-3 – to tie the match once again. Dunlap played in his third straight three-setter – the previous two match-decisive – and improved to 2-4 in contests of such nature.

No. 90 Langmo, playing at No. 2 position for the first time this season, also needed a third set after Igor Saveljic won the second set to tie the match, but prevailed, 6-4, 4-6, 6-3, nevertheless, to give Miami its first lead of the day at 3-2.

The momentary celebration was shortly lived, however, because Turzak picked up a comeback victory for NC State, 3-6, 6-4, 6-2 against senior Niclas Genovese at the bottom of the lineup, to further fuel the thriller on court 4.

“I was starting to cramp up, but I am glad my opponent gave me two easy points at the end,” Jankulovski said. “When the guys jumped on me at the end, my hamstring started cramping, but it was worth it, I’d say.”

Miami will close out a four-match homestand next week against South Alabama Friday and Louisville Sunday. First serves will be at 3 p.m., and noon, respectively.