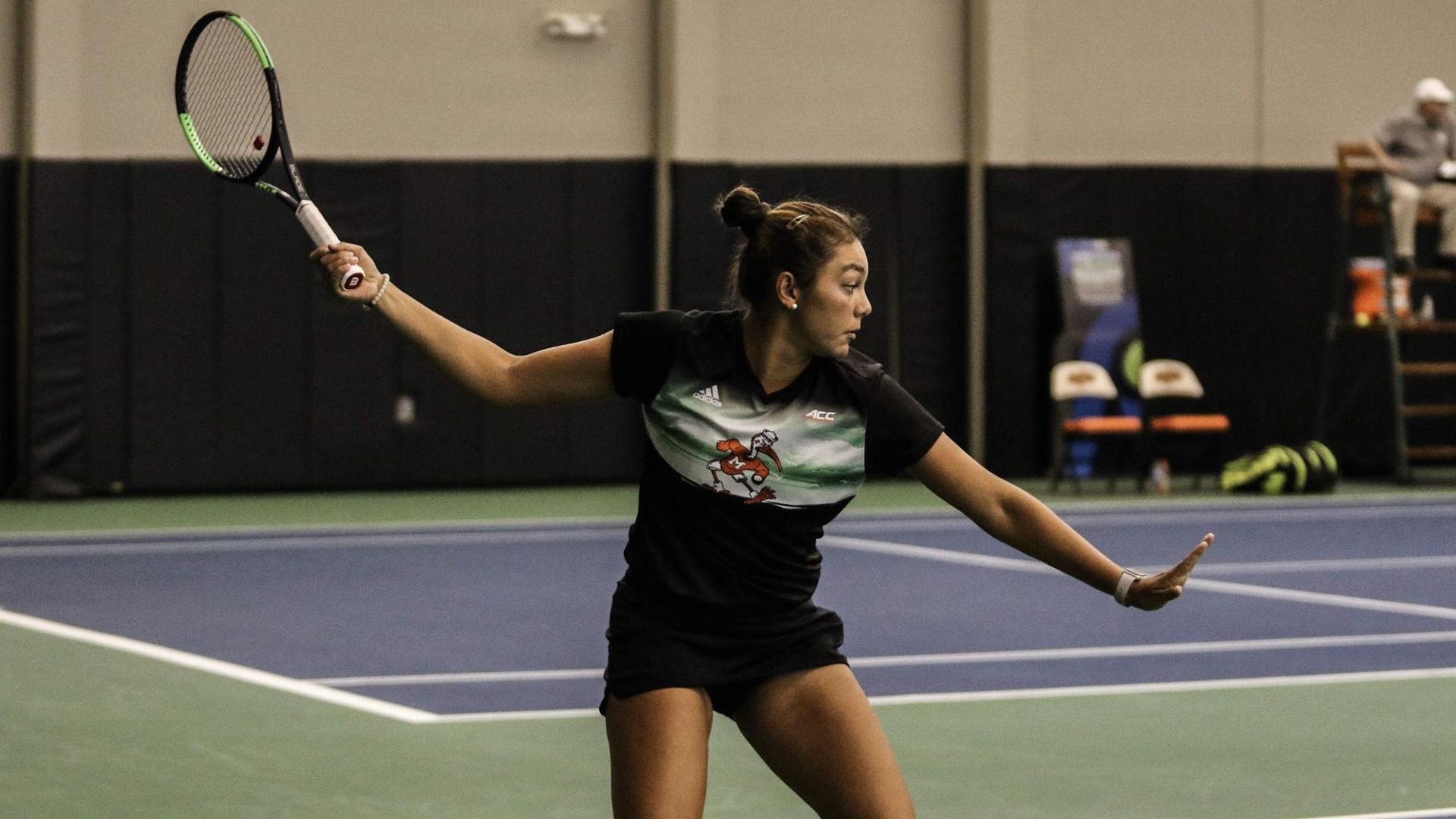 CHARLOTTESVILLE, Va. – Despite earning the doubles point, the University of Miami women’s tennis team dropped a 5-2 decision Friday evening at No. 21 Virginia.

No. 19 Miami (9-5, 5-2 ACC) had won seven of its past eight matches before falling to the Cavaliers at the Boar’s Head Sports Club.

“Credit to Virginia for playing a solid match today,” Miami head coach Paige Yaroshuk-Tews said. “We simply weren’t able to sustain the momentum in singles for any substantial period of time.”

Miami got off to a fast start in doubles play, as sophomore Dominika Paterova and freshman Ulyana Shirokova cruised to a 6-0 triumph over Teodora Radosavljevic and Erica Susi.

Sophomore Estela Perez-Somarriba and junior Daniella Roldan rallied from a 1-3 deficit in the decisive match to give the Hurricanes the doubles point.

“Doubles went our way, but we really didn’t play great to get there,” Yaroshuk-Tews said.

Facing No. 12 Rosie Johanson and Meghan Kelley, the Miami duo registered a 7-5 victory, marking the highest-ranked doubles pair the Hurricanes have beat in 2017-18.

Radosavljevic put Virginia back in front with a 6-0, 7-6 (7-3) triumph against Madcur, winning seven of the last 10 games after falling into an 0-3 hole to open the second set.

“I’m disappointed that Madcur had such a poor start to her singles match,” Yaroshuk-Tews said. “An 0-6 [score and] playing that way is truly unacceptable if we want to move forward.”

No. 74 Johanson sealed the win for the Cavaliers by knocking off ninth-ranked Perez-Somarriba, 6-3, 4-6, 6-1. She won 10 of the final 12 games to give Perez-Somarriba, the two-time reigning ACC Player of the Week, her first loss of the spring after starting 15-0.

For both Radosavljevic and Johanson, the wins avenged straight-set losses last year against the same Miami opponents at the same lineup spot in the same venue. The Hurricanes took last season’s contest, 4-2, on April 23, 2017.

With the match already clinched, Hunter Bleser tacked on the fifth point for Virginia by posting a 3-6, 7-6 (7-1), 6-2 defeat of Shirokova, who was 4-0 in three-set affairs entering the day.

Friday marked the first time all season the Hurricanes dropped a match by greater than two points. Of Miami’s four prior defeats, two were 4-3 and two were 4-2.

The Hurricanes return to action Sunday, when they square off with fourth-ranked Duke at noon in Durham, N.C.