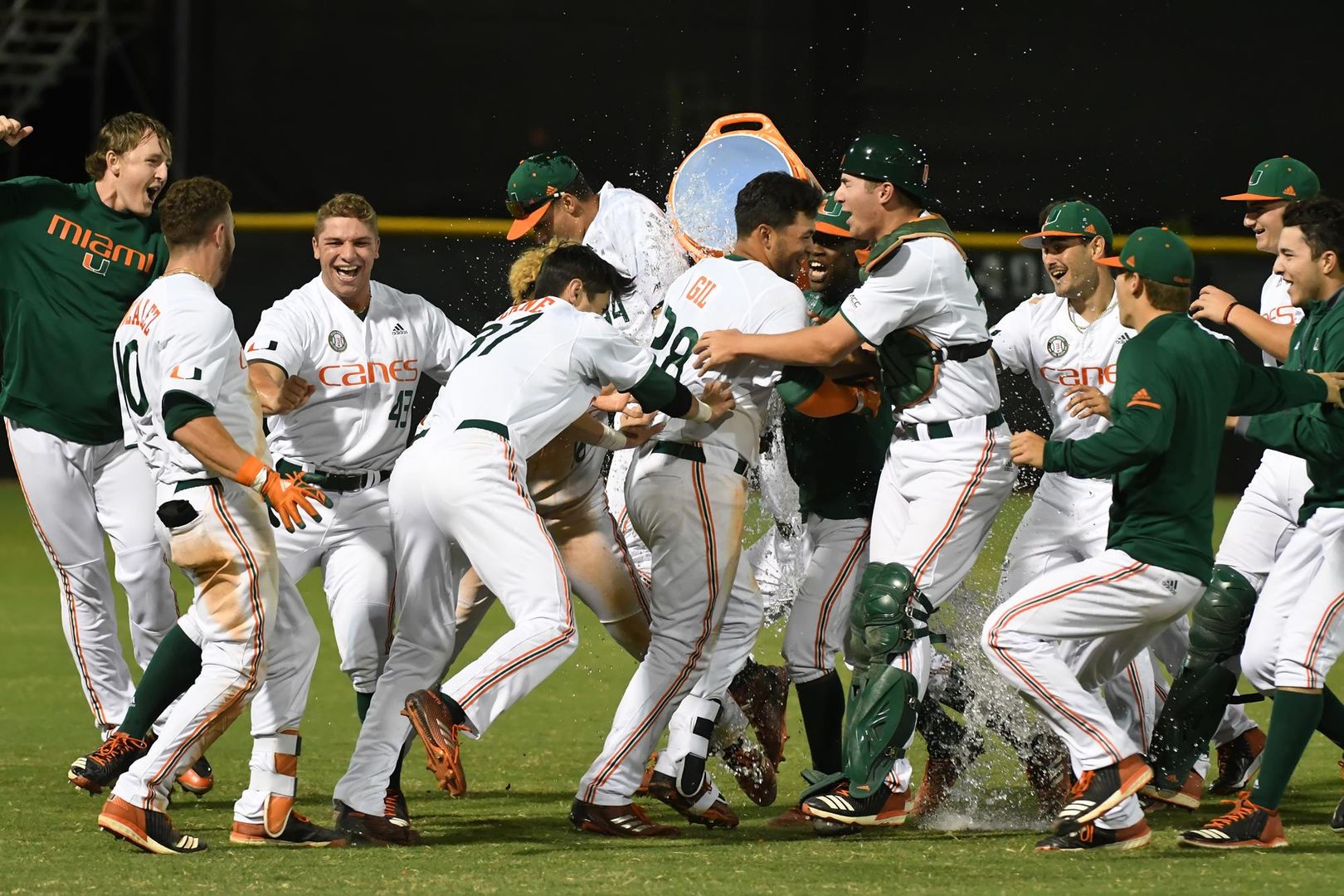 Gil Lifts Miami Past No. 24 Virginia in Extras

CORAL GABLES, Fla. – Chalk round two up to Raymond Gil.

After ending the ninth inning with a swinging strikeout against Virginia reliever Andrew Abbott with the winning run on third base, Gil came up against Abbott in a similar scenario in the 11th.

Miami’s emerging freshman won the rematch, lifting a bases-loaded single to right off Abbott to score senior Michael Burns and empty the Hurricanes’ dugout in the team’s second walk-off win of the year, a 3-2 victory over the Cavaliers.

The hit was Gil’s third of the night and capped an emotional sequence of extra innings, where Miami put the winning run in all three of the final frames until Gil’s heroics.

“First time, I had the same opportunity against the same pitcher and he got me with a curveball in the dirt,” Gil said. “Facing him twice, I felt really comfortable coming up again with the bases loaded. I knew he had to throw me something good because he couldn’t afford to walk me.

“I was sitting fastball and I got it.”

That Gil did, clearing the head of Virginia’s right fielder Andrew Tappen, who was playing shallow with Virginia playing five infielders in hopes of turning a double play.

Gil (3-for-5) was one of four Hurricanes to record multi-hit performances in a 14-hit barrage by the hosts.

“We’ve said we’re a young club, but we’re a good club,” Gil said. “We knew we just had to put hits together and we’ll start getting wins. Our pitching staff has been doing a good job and we’re starting to do that.”

Senior lefthander Jeb Bargfeldt may not have replicated last season’s gem against Virginia, but he did more than enough in another dominant outing.

A year after throwing a complete game in a dominant win in Charlottesville, Va., Bargfeldt went 7.2 impressive innings in a pitchers’ duel to tie a season-long outing.

The Hurricanes (10-11, 4-3 ACC) broke a scoreless deadlock in the fourth on a run-scoring groundout from senior Michael Burns.

With runners on first and second after a double from freshman Dylan Cloonan and a single from senior Hunter Tackett, Burns drove an 0-2 pitch from Casey to the right side of the infield.

Virginia (13-8, 3-4 ACC) first baseman Nate Eikhoff attempted to jumpstart a double play with a throw to second, but Burns beat the return throw to first, allowing Cloonan to score the game’s opening run.

Virginia tied the game in the sixth, plating two runs on an RBI single from Nate Eikhoff and an RBI double from Alex Tappen.

After the two-run sixth, Bargfeldt retired the next six batters he faced into the eighth inning. He was relieved after issuing a two-out walk to Caleb Knight, earning a standing ovation from the 2,347 fans in attendance.

Freshman Jeremy Cook recorded the final out of the eighth and tossed 2.1 scoreless innings.

Miami’s bullpen allowed zero hits over the final 3.1 innings, with senior Frankie Bartow (1-0) picking up his first win of the year with a clean 11th inning that took only six pitches.

Strong pitching late set the stage for the Hurricanes, who saw Burns reach on an error and freshman Isaac Quinones make it two runners on with a single to left. A perfect bunt from freshman Willy Escala loaded the bases with no outs, and Gil cracked the second pitch of his second at bat against Abbott (2-1) to right to clinch the victory.

Quinones (3-for-5) extended his hitting streak to a career-best 12 games, while Escala (2-for-4) and Tackett (2-for-4) also led the charge offensively.

But it was Gil, who started at first base for the first time since his freshman year of high school, who was Friday night’s hero.

“This can get us on a roll. [Coach Morris] said in our team meeting today that this was one of the biggest series of the spring,” Gil said. “Coming off that tough loss Wednesday, this can get us going.”

The two teams return to Alex Rodriguez Park at Mark Light Field Saturday for the second game of the series. First pitch for the contest, slated for broadcast on ACC Network Extra, 790 The Ticket and WVUM 90.5 FM, is set for 7 p.m.