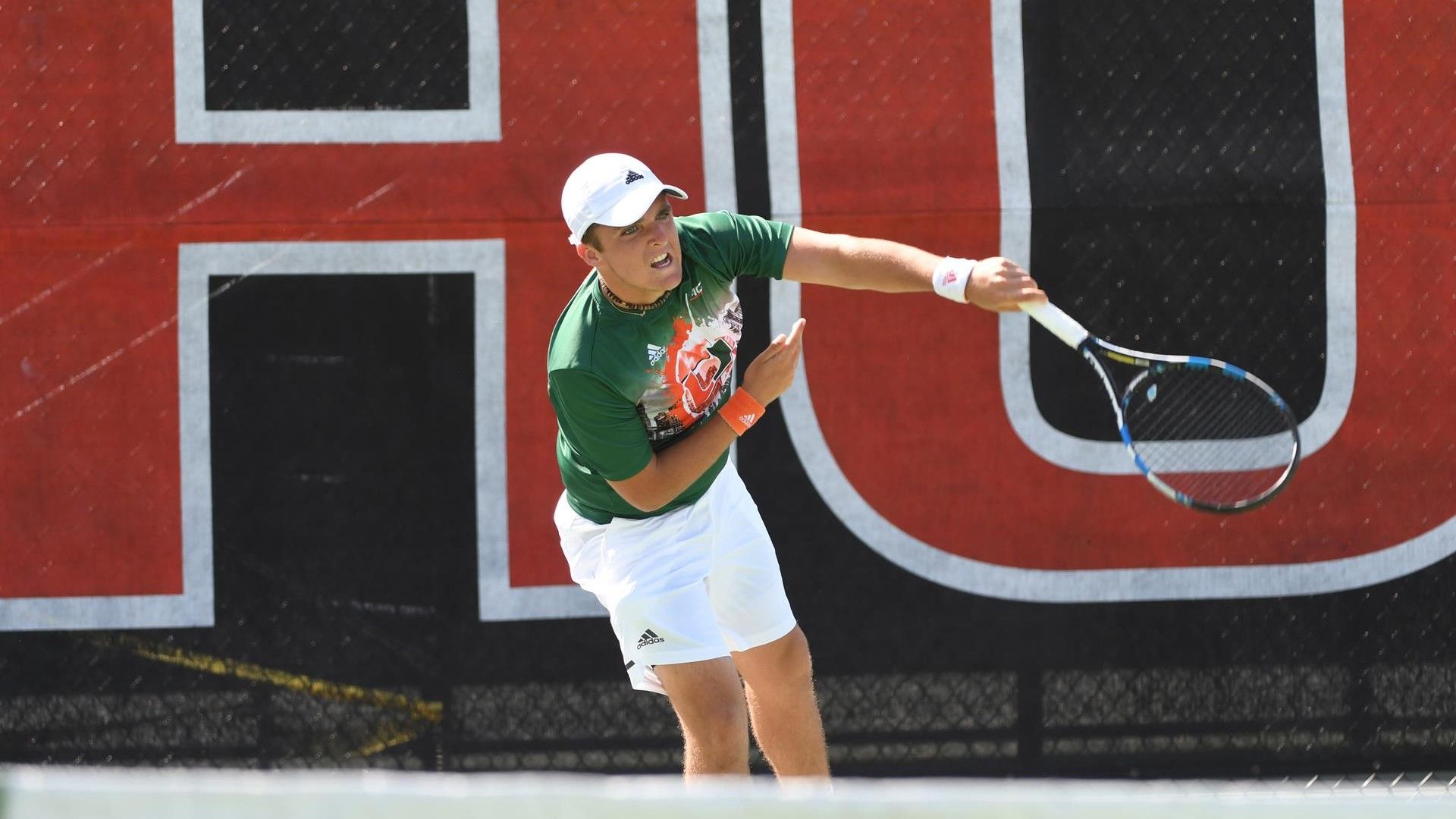 Everyone contributes for the Hurricanes (8-5), who allowed the Vikings (9-6) to win only one set in the first-ever meeting between both programs. After the 5-0 win against William & Mary earlier, Miami finished its first doubleheader of the season outscoring its opponents 12-0 with a total set margin of 23-2.

“Every match is tough,” Miami head coach Aljosa Piric said. “It’s the approach we are after, the fight, and that’s what we were looking forward to do today and we did.

“We talk to our guys about mental engagement all the time, we talk about mentally staying in matches from beginning to end and that’s what we got to do this afternoon.”

Langmo helped fellow senior Nile Clark to a 6-4 doubles triumph against Nico Mostardi and Benjamin Slade on court 1 before Dunlap and Jankulovski also recorded their second doubles win of the day – 6-3 against Mirko Radosevic and Matthew Terry – to secure the opening point at the No. 3 position. That victory came after a deuce and was hard-fought after the Cleveland State’s duo eliminated Miami’s first four set points.

The freshman duo of Pablo Aycart and Adria Soriano made a late rally and won the last two games at No. 2 to keep William Malm and Luke Phillips at bay, 5-3, before play was halted.

Thanks to blanking Slade in the second set, Dunlap was quickest to a singles victory for the second time on the day, 6-3, 6-0 to double the Canes’ lead in the match.

Freshman Adria Soriano, who couldn’t complete his singles match against the Tribe, made sure he picked up his first victory in nine days, triumphing 6-3, 6-2, over Terry at the No. 2 position. Soriano improved to 8-2 in singles play.

Aycart, who has picked up four doubles victories this spring alongside Clark, lost only five games in his debut for a 6-3, 6-2 victory over Radosevic at the bottom of the lineup.

Not long after, fellow rookie Jankulovski capped a 6-4, 6-1 win against Phillips to increase Miami’s cushion to 5-0. The Hurricanes have now put up at least five points on the board in six out of their seven home duals.

To top off the Hurricanes’ dream debut against Horizon League opposition, senior Niclas Genovese came from behind against Gabriel Evtimov, 4-6, 6-3, 10-5, to leave the Vikings empty-handed.

Miami has a bye from conference play next week but will go up to Orlando, Fla., for the second time in as many weeks to face UCF on Sunday at 1 p.m.