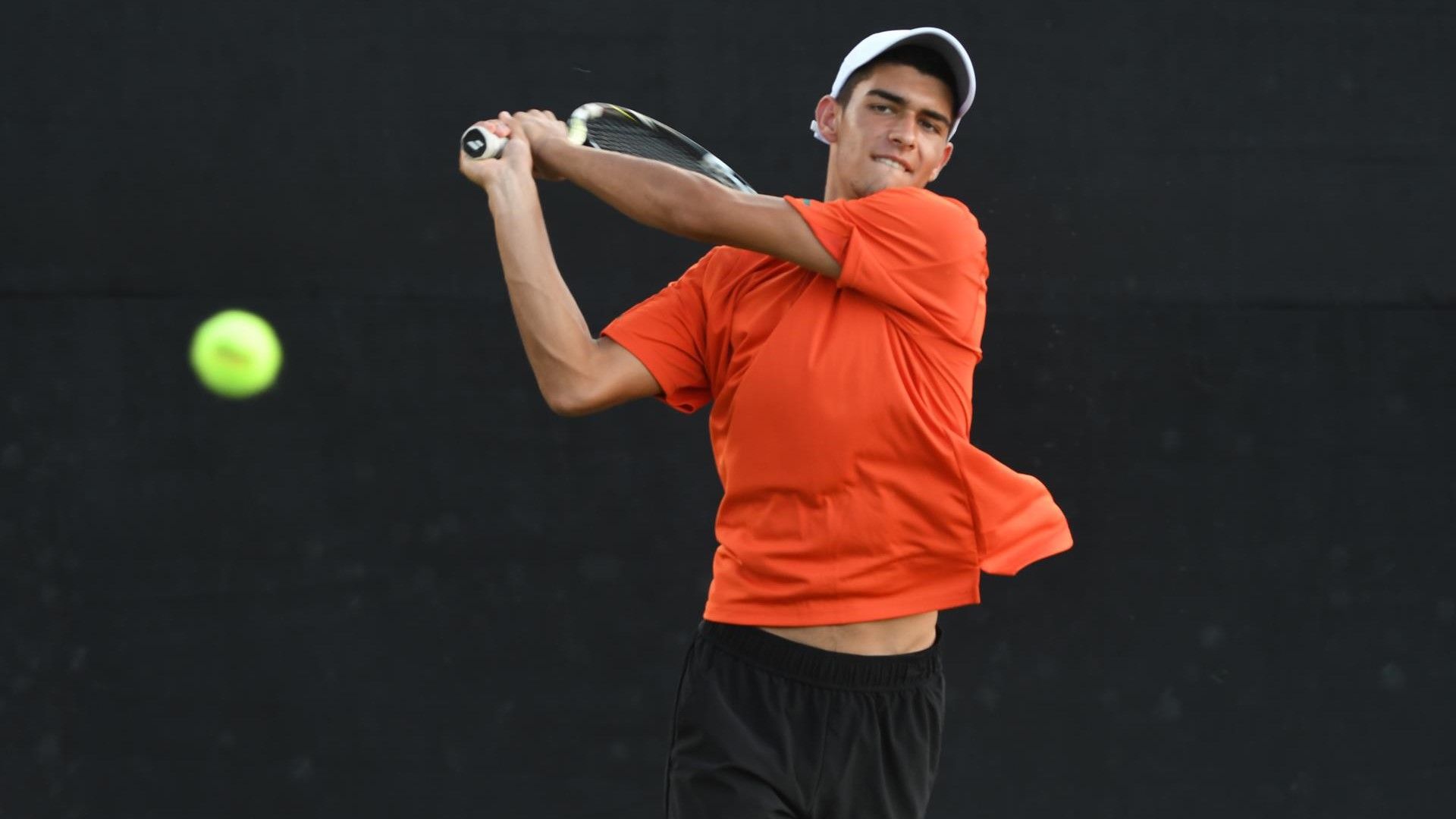 Two Canes Advance to the Semifinals in Alabama

Top-seeded Soriano recorded straight-set victories over Daniel Cardenas of Lipscomb and Eduardo Lourido of Samford in the White singles draw – 6-4, 7-5 and 7-5, 6-1, respectively – to set up a meeting with Portland’s Pierre Garcia in the early afternoon Saturday. The freshman will enter the semifinal with a 7-3 singles record this fall. Shimamoto first defeated Tennessee’s Ryan Smith 6-0, 6-4 and then defeated Santiago di Loreto 7-6 (6), 6-4 to reach the semis of the Houndstooth draw. Shimamoto won two singles matches in the same event for the first time in his career to improve to 3-4 this fall.

Their classmate Bojan Jankulovski also recorded a first-round victory at the Country Club of Birmingham, but his run to the title were halted at the quarter-finals by fourth-seeded Hamish Stewart of South Alabama. The freshman dominated in the round of 16 and shut out Ronit Bisht of Southern Miss in the Crimson draw 6-0, 6-0. Jankulovski will continue competition Saturday with a singles records of 5-5.

Senior Christian Langmo was the only Miami player at the tournament who could not get past its opponent in the opening round, falling to local favorite Tim Dollman of UAB, 7-5, 6-2. Langmo made up for it in the afternoon, taking down Southern Miss’ Teeradom Tortrakul in the consolation play of the Crimson draw – 6-4, 6-0 – to improve to 10-4 in singles play. With the victory, the senior tied his fall record for 2015 and will try to improve it on Sunday against Tulane’s Tim Ruetzel. Earlier this season, Soriano defeated Rutzel 6-2, 4-6, 6-2 at the Rice Invitational.

In the eight-pair White doubles draw, Langmo and Shimamoto defeated UAB’s duo of Kenton Parton and Stefan Gonzalez, 8-4, to reach Saturday’s semifinal. There, the second-seeded Hurricanes, who played their first match together, will face di Loreto and his partner Loic Cloes, who is ranked No. 125 in singles.

In the Crimson draw, top-seeded Soriano and Jankulovski, who had a 5-2 record so far in the fall, were bested 8-3 by Lourido and Jake Faundez. On Saturday morning, they will face Edson Ortiz and Zhe Zhou, who represent co-host Alabama.

Miami men’s tennis resumes a few weeks after the New Year holidays. The Hurricanes’ first contest of the spring season will be at Tulane on Jan. 19.