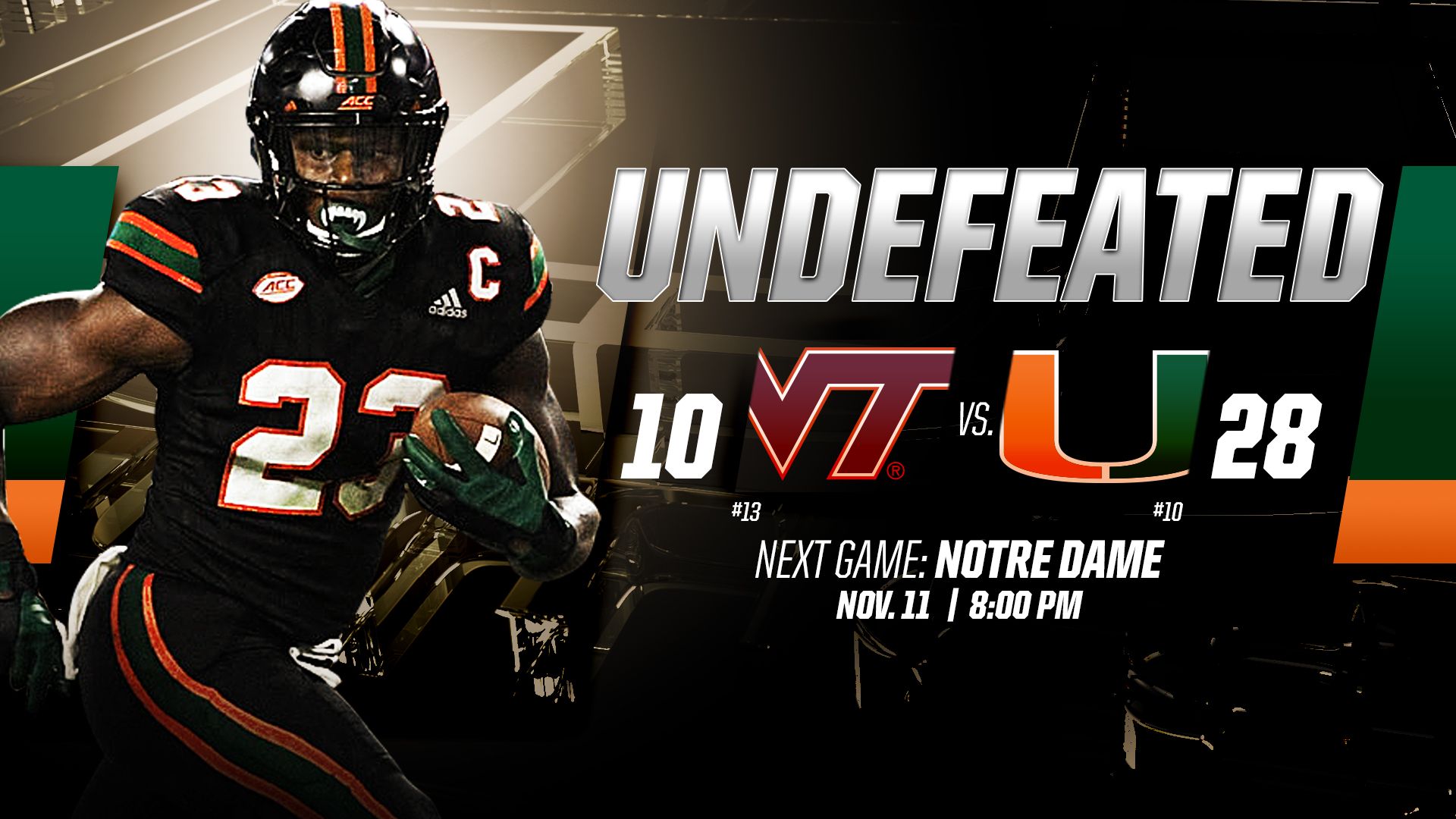 MIAMI GARDENS, Fla. – The Miami Hurricanes came into Hard Rock Stadium Saturday night eager for a primetime matchup against a top 15 team and left with an impressive victory over the defending ACC Coastal champions.

“It was an hour before kickoff, one of the guys came out and they just noticed the difference of the energy,” Miami defensive coordinator Manny Diaz said. “The student section brought it and the fans brought it. Two hours before kickoff, just when the buses pulled up and seeing the scenes that were going on in the parking lot, let our guys know that the city is different and that’s the relationship between Hurricane football and South Florida.”

With the victory, the Hurricanes have the inside track to the ACC Coastal division title. Miami has won eight consecutive games at Hard Rock Stadium and improved its FBS-leading win streak to 13 games.

“I guess we all know the stat that means the most, and that is the victory,” Miami head coach Mark Richt said. “We’re so excited. We beat a very good team, very well-coached. A team that came in with good reason to believe they could take care of business today. We found a way to win. It’s a tribute to our players, coaches, managers, trainers, our fan base, our students, our band…everybody. Our administration. It’s great. It takes a lot of work to get to a point to even get in a game like this, and then to win it was spectacular. At least that’s how it feels. I don’t know if it was a spectacular win, but certainly it feels that way right now.”

A defensive battle was expected, as Miami and Virginia Tech featured two of the top defenses in the ACC, and the two teams lived up to the billing early on.

The Hurricanes’ defense stepped up first, forcing a three-and-out on Virginia Tech’s opening drive. Miami’s offense carried that momentum into its opening possession, starting its attack with a wide receiver pass from senior Braxton Berrios to quarterback Malik Rosier for a 17-yard gain to the Miami 48.

“It was magical,” linebacker Shaquille Quarterman said. “This was the livest game I’ve ever been a part of. I’ve never seen so much love for our team, the way our fans showed up. It took me for surprise honestly coming out running out the smoke. The smoke is always amazing, but when you see every seat filled and everybody standing up. We rarely saw any other color that wasn’t orange and green. We walked on the field for the first drive and it’s bonkers in there. It’s just amazing.”

Two plays later, the duo connected in the more conventional combination of Rosier to Berrios for a 24-yard gain that moved the Canes into VT territory. Rosier broke free for a 36-yard rush to the Virginia Tech 2, but the Hokies defense held firm and stopped Miami on fourth-and-goal from the two yard line and took over the ball on downs.

Virginia Tech’s second possession had more success, advancing from the VT 5 to the Hokies’ 35, but the Hurricanes’ defense answered. Miami forced a Hokies’ punt after freshman safety Amari Carter sacked Virginia Tech quarterback Josh Jackson on third-and-10 from the VT 35 for a 10-yard loss.

Miami and Virginia Tech traded punts one more time before the Hurricane offense got some momentum early in the second quarter. Taking over the ball on its own 31 with 14:23 remaining in the opening half, Rosier hit tight end Christopher Herndon IV for an 18-yard gain to start Miami’s drive and hit running back Travis Homer for a 20-yard gain to the VT 27.

Two plays later, Hokies’ defensive back Adonis Alexander was called for pass interference in the end zone on Miami wide receiver Jeff Thomas to give the Hurricanes a fresh set of downs from the VT 15. Three plays later, Rosier hit Berrios for an eight-yard touchdown that gave Miami a 7-0 lead with 9:41 remaining in the half.

Miami doubled its lead on its next drive, as Homer exploded for a career-long 64-yard rushing touchdown to give the Hurricanes a 14-0 advantage with 7:09 to go before halftime. The sophomore running back rushed for a game-high 95 yards on 14 carries with one touchdown. He added 20 receiving yards.

Virginia Tech’s offense drove into Miami territory, reaching the UM 20, but the Hurricanes pushed the Hokies back to the UM 33 after Jackson ran for a loss of seven and fumbled. Running back Deshawn McClease recovered to set up a 50-yard field goal by VT kicker Joey Slye to put the Hokies down 11, 14-3, with 2:03 left in the half.

Miami pushed the tempo on its next possession, trying to add points to its tally before the half. After DeeJay Dallas rushed for a career-long 19 yards to the 50, Rosier threw deep to Jeff Thomas and was picked off by Alexander at the VT 15 and the junior defensive back returned the interception to the VT 33.

Jackson quickly drove the Hokies deep into Miami territory, completing consecutive passes to sophomore Eric Kumah for a combined 22 yards and then hitting senior Cam Phillips for a 27-yard gain to the Miami 18 with 25 seconds on the clock.

But the Canes defense held strong and broke out the turnover chain, as junior defensive back Jaquan Johnson forced receiver Sean Savoy to fumble and junior defensive lineman RJ McIntosh scooped up the ball and ran 35 yards to the UM 49 to end the threat and send the Hurricanes into the locker room up, 14-3, at the half.

Miami’s defense held Virginia Tech to 149 yards of total offense in the opening half, and allowed just 299 total yards over the course of the game. The Hokies were 3-of-14 on third down and averaged just 4.0 yards per play, while turning the ball over four times.

“As a coach you’re always thinking about the plays that you wish you had still stop, but I thought our [guys were] relentlessness,” Diaz said. “I thought our efforts from start to finish were really good. What I watched tonight was the symbiotic relationship between the defense and the offense and special teams.”

The Hurricanes appeared poised for another big drive to open the second half, as Rosier hit Berrios for an 18-yard gain. But two plays later, Reggie Floyd snared a tipped pass intended for Ahmmon Richards and returned it to the Miami 17.

Virginia Tech converted that turnover into points, as Jackson pushed himself across the goal line from one yard out to score the Hokies’ only touchdown of the day and cut Miami’s lead to four, 14-10.

The Hokies picked Rosier off again one possession later, as Greg Stroman jumped in front of a pass intended for Thomas to give Virginia Tech the ball at the VT 45. But the Hurricanes defense held strong, stopping the Hokies on fourth-and-2 from the UM 32 when Jackson couldn’t handle a snap on a jet sweep and the VT quarterback fell on the ball seven yards behind the line of scrimmage to give Miami the ball on its own 39.

“I feel like the biggest thing was our defense,” Rosier said. “Every pick I had, Chad Thomas, Shaq Quarterman those guys would come up to me and say you’re fine, we’ll get you the ball back don’t worry. For an offense, for that to happen, most defenses hang their heads or the offense would hang their heads, but for us they kept their heads high and kept fighting and gave us the ball back. For us, that was huge momentum.”

Miami benefitted from a personal foul, as Floyd – who picked off Rosier on the first drive of the second half – hit Rosier late after handing off to Homer. The 15-yard penalty gave the Canes a new set of downs and Rosier responded with a 43-yard touchdown to Herndon on the next play, giving Miami a 21-10 lead with seven minutes remaining in the third quarter.

“The win is always a great win – no matter if it’s a blow out or a close game,” Herndon said. “I’m just excited for my team, we’ve worked so hard. We’ve started since the end of the season last year and we’ve grown so much, but we don’t want to just be satisfied. We want to continue to keep everything rolling, continue to work. This was a great game, but it’s time to move to the next one.”

The turnover chain made its second appearance of the night when Jackson was picked off by Jaquan Johnson on fourth-and-3 from the Miami 34. The junior safety made an acrobatic one-handed interception and then returned it 20 yards to give the Canes the ball on the UM 44 with 38 seconds left in the third quarter.

“Wearing the chain, it’s a big accomplishment,” Johnson said. “You know we go out there and we have to guard an offensive player the whole game and sometimes we don’t get credit for what we do. When we get the turnover, we get rewarded and everyone sees we’re doing our job. It’s definitely a trending topic. Everybody is wearing the chains, everybody is wearing the shirts with the chains. I think it’s intimidating for opponents to come in and see the Turnover Chain they got to think ‘we not trying to get a turnover,’ it probably plays a mental aspect into messing with the other team.”

On the first play of the fourth quarter, Rosier connected with Richards for a 42-yard gain to the Hokies’ 13. The redshirt junior quarterback followed that big play with a 13-yard scamper to the end zone that gave Miami a 28-10 lead. Rosier finished the game 10-for-21 for 193 yards and accounted for three total touchdowns (two passing, one rushing) with three interceptions. He has thrown at least one touchdown pass in each of his nine career starts. Rosier’s 84 rushing yards on 13 carries were a career high.

“It was a great night of not flinching,” Richt said of Rosier’s performance. “I’ll put in some props for my son, Jon. He really did a good job of keeping him even-keeled and saying, ‘Look, man, we’re going to take shots. Some of those things happen and you can’t flinch. You cannot flinch. We believe in you, we trust you and you’re our guy, so just get used to it.’ I heard some of the things Jon was saying over the headphones, and he was saying the right things to Malik to help him know that we’re behind him and he’s doing a pretty darn good job against a great defense.”

Jonathan Garvin donned the turnover chain with an impressive play on first-and-10 from the VT 38 when the freshman defensive lineman sacked Jackson for a loss of seven an forced a fumble that he recovered to give Miami the ball at the Virginia Tech 29. The sack was Miami’s fourth of the game, as Garvin, Carter, Joe Jackson and Kendrick Norton found their way to the Hokies’ quarterback on Saturday.

Safety Sheldrick Redwine punctuated the victory with an interception in the end zone. The junior defensive back picked off Jackson, giving the redshirt freshman two interceptions thrown on the night, and returned it 45 yards. One play later, the Hurricanes took a knee and made their eighth straight victory to begin the 2017 season official.

Miami is back at Hard Rock Stadium next Saturday for a matchup against the Notre Dame Fighting Irish. Click here for ticket information.