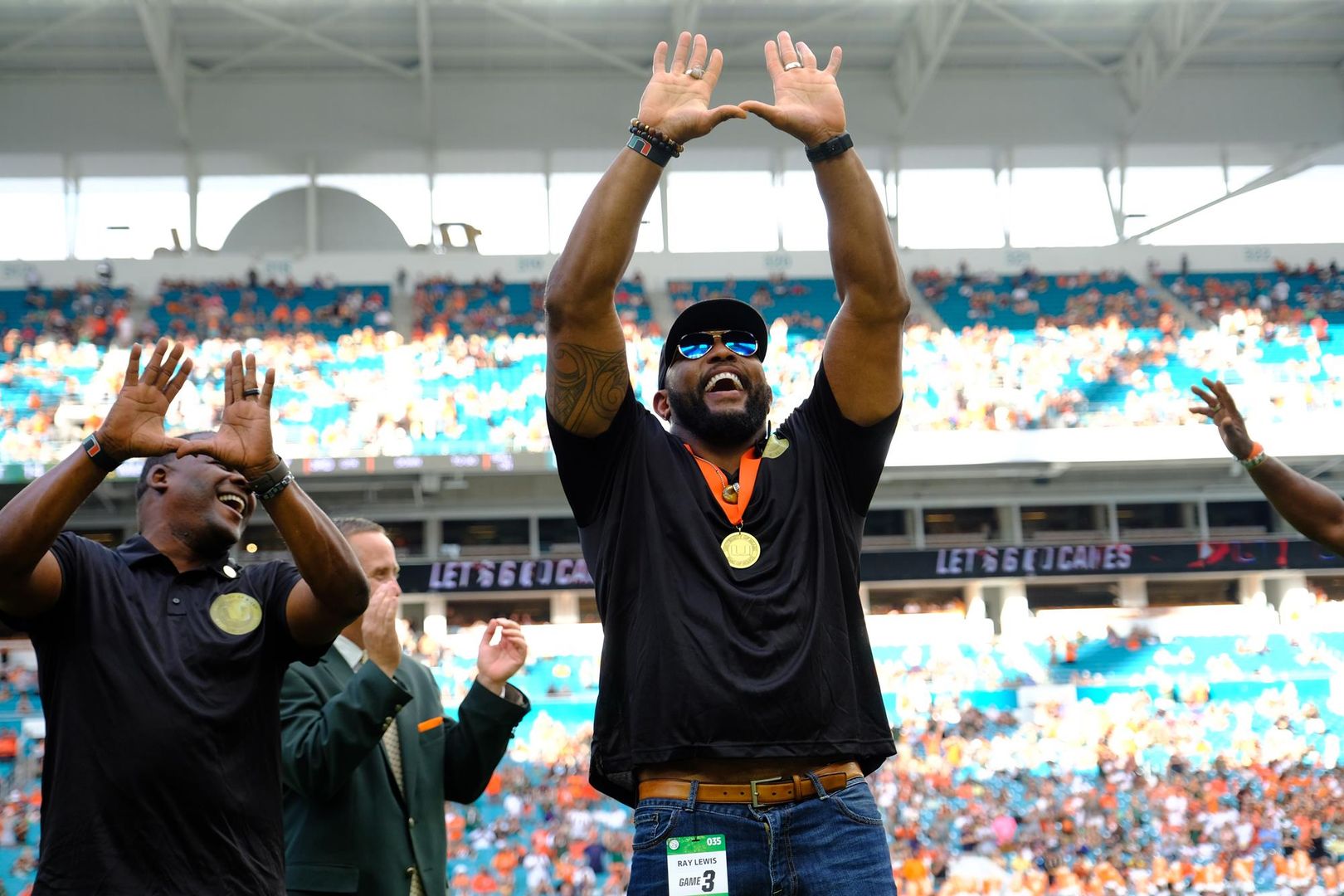 CORAL GABLES, Fla. – Five of the greatest players in football history were inducted into the University of Miami’s football Ring of Honor on Saturday.

But the ovation multiplied exponentially, as Bailey introduced the family of the late Taylor, Lewis, Sapp and Irvin. Reed, who could not attend due to a scheduling conflict, will be recognized prior to the Hurricanes’ game against Notre Dame on Nov. 11.

A Freshman All-America in 1985 and a second-team All-America in 1987, Irvin is one of the most decorated wide receivers in Miami history. Irvin’s 26 receiving touchdowns are the most in Hurricanes history, his 2,423 receiving yards are the third-most, his 143 career receptions are tied for fourth, and he led the Hurricanes in receiving yards in each of his three seasons. After winning a national championship with the Hurricanes, Irvin was drafted in the first round by Dallas in 1988 and went on to win three Super Bowls while starring for the Cowboys.

“This is everything,” Irvin said. “To be in good health, good mind and great spirits and enjoy this honor at this time with these guys, those are the true blessings from life, true blessings from God. They’re going down as some of the greatest football players ever, to ever do it at any level so it’s just a great blessing.”

Lewis earned All-BIG EAST recognition in 1994 and 1995, compiling one of the most dominant careers by a linebacker ever at The U. Lewis, who ranks sixth all-time in career tackles at Miami with 388, has the two most prolific seasons in history to his name, having recorded 160 total tackles in 1995 and 152 in 1994. A two-time Super Bowl champion and 13-time NFL Pro Bowler, Lewis was drafted in the first round by Baltimore in 1995 and played all 17 seasons with the Ravens, compiling over 2,000 career tackles. But the all-world linebacker almost never made it to Miami.

“I was a Seminole fan growing up because we didn’t have a television to actually have Miami games on,” Lewis said. “It changed immediately, of course, when I became a Hurricane. I got the last scholarship to come to school and I’m telling you that every moment in life means something and that moment when I got the phone call from Dennis Erickson to give me the scholarship was probably one of the greatest moments of my life.”

The first Hurricane to ever win the prestigious Lombardi Trophy, Sapp was the unanimous 1994 BIG EAST Defensive Player of the Year before being selected in the first round by Tampa Bay in the 1995 NFL Draft. Sapp was also named Defensive Player of the Year by Sports Illustrated, the Football Writers’ Association of America (FWAA) and ABC Sports, among others, and led a Miami defense that ranked first in the NCAA in total defense and scoring defense in 1994. Sapp, who also won the Nagurski Trophy, was selected to seven Pro Bowls and won the Super Bowl with Tampa Bay in 2002.

“I think one of the things that we get away from because our careers go so fast is we get away from the moment of who made us and who was that person who walked beside us and there’s no better men for my life that I could have asked for to be the better role models for me,” Sapp said of his fellow Ring of Honor inductees.

A Miami Hurricanes legend who passed away in 2007, Taylor led the nation in interceptions in his final season in 2003 and set a Miami record by returning three of those picks for scores. Taylor, who was selected in the first round by Washington in the 2004 NFL Draft, was a consensus All-American in 2003, a finalist for the Jim Thorpe Award and was named the 2003 BIG East Defensive Player of the Year. He ranks fifth at Miami in career interceptions (14) and second in interception return yards (306), won a national championship in 2001 and made two Pro Bowls with the Redskins before his tragic passing.

“My dad worked very hard in his life to achieve his dreams,” Taylor’s 11-year-old daughter Jackie said in her speech at Friday’s Ring of Honor luncheon. “He believed that getting to the next level meant working hard on his game while everyone else was resting. I am so proud of how hard my father worked to receive this honor. He took a lot of pride in his career as a Hurricane. The University of Miami not only gave my father the opportunity to play for the best team in the nation, but it also gave him an amazing education. If he were here with us today, I know he would feel so honored and proud to be inducted into the Ring of Honor. Congratulations to all his fellow inductees and I’m sure he would be so honored to be recognized alongside you all.”

One of the best safeties to ever play the game, Reed was a consensus first-team All-America honoree in his final two seasons at Miami, including a 2001 season where he helped lead the Hurricanes to a national championship. Reed was an All-BIG EAST selection in his final two seasons, and still holds the Hurricanes’ record for career interceptions with 21 and interception return yards with 389. Reed won a Super Bowl with Baltimore in 2012, was named to nine Pro Bowls and was selected the NFL Defensive Player of the Year in 2004.