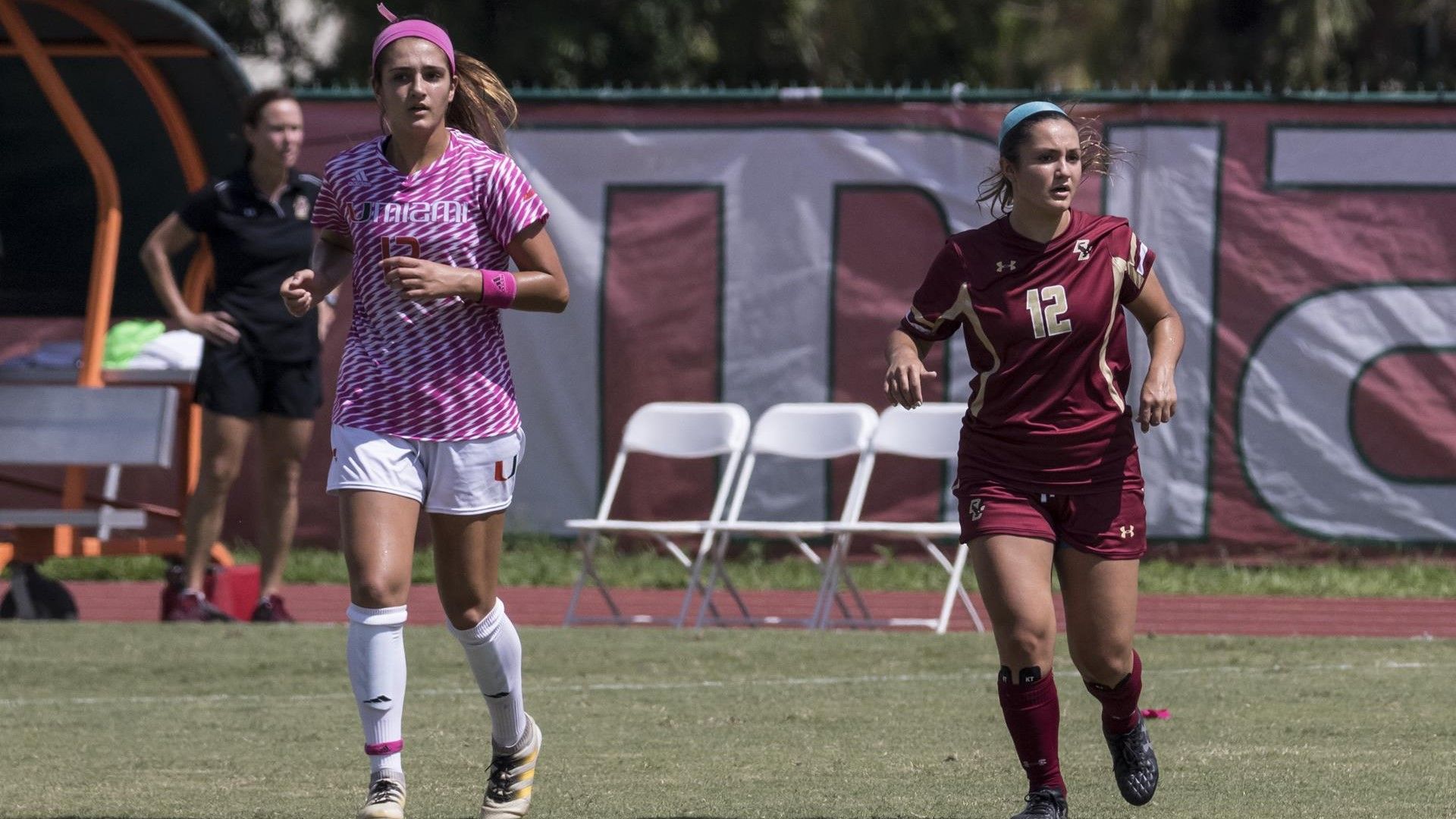 The Hurricanes scored the opening goal of the match, but the Eagles responded to earn the victory at Cobb Stadium despite a career-high 10 saves from redshirt junior goalkeeper Phallon Tullis-Joyce.

The Shoreham, N.Y., native began her impressive tally with a stellar diving stop in the fifth minute on the opening shot on goal of the match. Shortly thereafter, the Hurricanes took the early lead.

Senior forward Ronnie Johnson played a pass along to a running Kristina Fisher and the sophomore midfielder was taken down in the box by Boston College (9-5-1, 3-2-1 ACC) redshirt junior goalkeeper Alexis Bryant.

After earning the penalty kick, Fisher calmly stepped to the spot and beat Bryant to give the Hurricanes a 1-0 lead in the seventh minute. The Jupiter, Fla., native moved to three-for-three in her career on in-match penalty kicks.

The Eagles leveled the score in the 16th minute when freshman forward/midfielder Sam Coffey bent a corner kick off the far post and it bounced into the net.

In the 32nd minute, Boston College took the lead on a goal by junior forward Carly Leipzig, who sent a strike past Tullis-Joyce after pass from sophomore midfielder Emily Langenderfer.

The two sides went back and forth, mostly evenly, for the remainder of the first half and much of the second until Boston College again found the back of the net.

The Eagles padded their lead in the lead in the 74th minute. Redshirt senior Lauren Berman charged into the box, received a cross from Leipzig and tapped it past Tullis-Joyce to make it 3-1. Sophomore defender Erin Covenry was also credited with an assist on the play.

Miami (4-7-0, 0-5-0 ACC) nearly pulled one back in the 88th minute, but Bryant made an impressive save on redshirt sophomore forward/defender Camie Kelton’s breakaway chance.

Sunday was the first time the Hurricanes conceded multiple goals in consecutive match since the final two contests of 2015, Oct. 25 at Boston College and Oct. 31 against eighth-ranked North Carolina.

The last time Miami allowed three-plus goals in back-to-back matches was in the second and third matches of the same season, Aug. 27 versus Florida and Aug. 30 against UCF.

The Hurricanes are set to return to the field Wednesday at 1 p.m., for their rescheduled match against Syracuse at SU Soccer Stadium in Syracuse, N.Y.