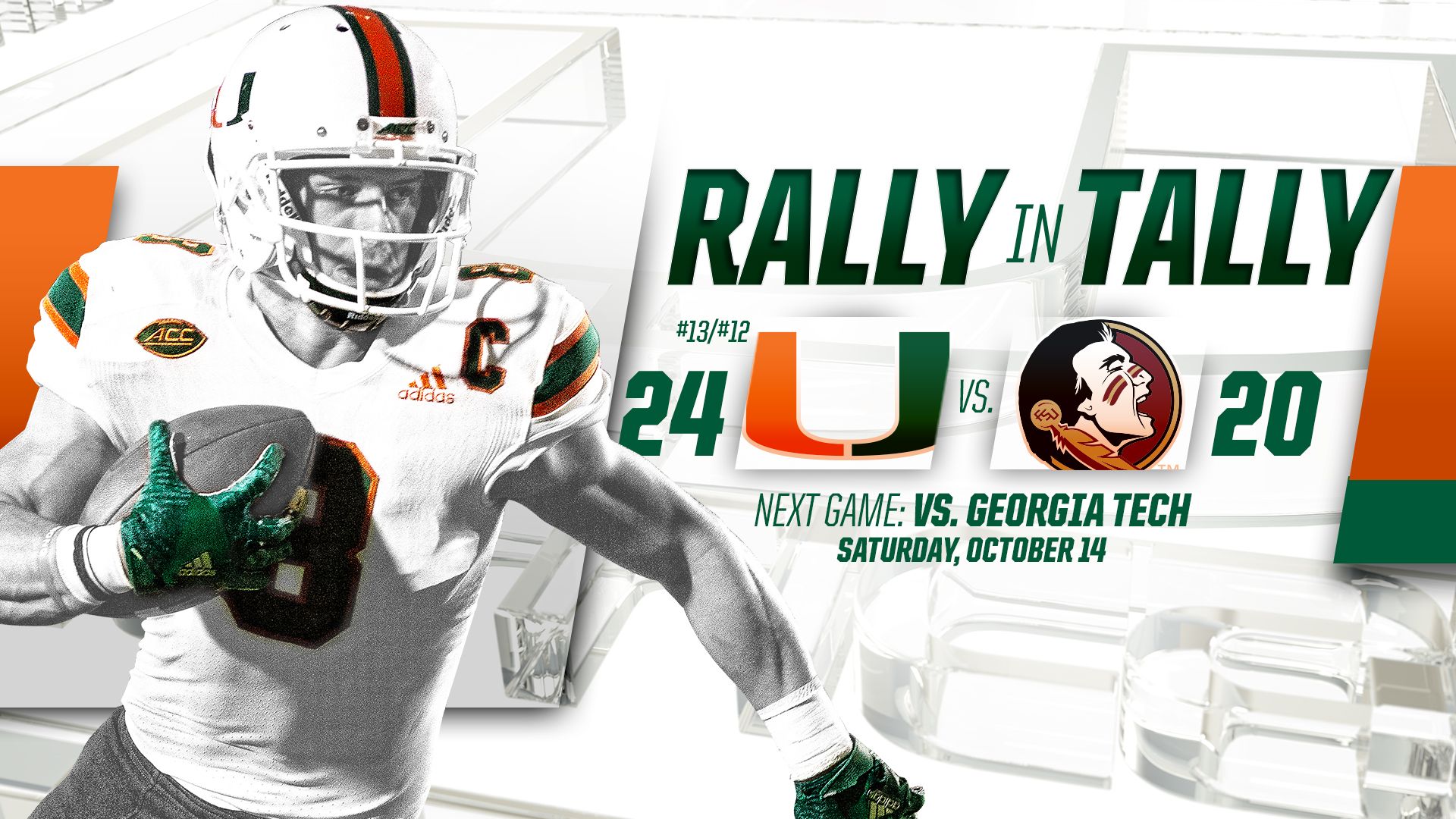 TALLAHASSEE, Fla. – It took 59 minutes and 54 seconds, but the Miami Hurricanes prevailed over the Florida State Seminoles, 24-20, to remain unbeaten in 2017.

The annual rivalry matchup between the No. 13/12 Canes and Noles was full of excitement in the second half, as the two teams combined for 41 points and five lead changes before a loud crowd of 78,169 fans at Doak Campbell Stadium on Saturday.

“We had a wonderful celebration in the locker room,” Miami head coach Mark Richt said. “It was a long time coming for our players, coaches, administration, but certainly a long time coming for our fans. I am probably most happy for them because they are a true orange and green fan base. The ones that were here today especially; got here early, were loud and proud the whole time, pregame warm-up, kicking butt. Their presence was felt by our team, and by me personally. It doesn’t matter how you win a game like this. Really, quite frankly, it doesn’t matter how you win any game if you just do it within the rules because wins are hard to get and especially in this series. I am just thankful. Praise the Lord.”

But it was redshirt junior Darrell Langham, who was on his second offensive snap of the night, who dove at the goal line to score a 23-yard touchdown catch on Florida State’s star corner Tarvarus McFadden with six seconds remaining that snatched a victory from the Seminoles and sent the Hurricanes home victorious.

“I didn’t know if I was in or not,” Langham said. “I was just happy I caught the ball and was just trying to get in the end zone. The whole way through that play just goes back to practice for me. Coach [Ron Dugans] is always telling me to be big, use my body, go for the ball. I’m just happy I came down wit the ball and happy I ended the streak.”

The path to victory was a roller coaster ride for Miami (4-0, 2-0 ACC), who went into the locker room down, 3-0, at half time. The Hurricanes struggled to get much going offensively in the opening 30 minutes, tallying just 57 yards of total offense. But their attack began clicking after the break.

After having three penalties for 40 yards in the first half, the flags continued to hamper the Hurricanes early in the second half. Braxton Berrios hauled in a pass that would have put Miami in the red zone, but was called for offensive pass interference that pushed the Canes back to third-and 20 from the Miami 43.

The Canes bounced back one snap later, as Rosier connected with Ahmmon Richards for a 32-yard gain to the FSU 25 to extended the drive and the redshirt junior quarterback followed with an eight-yard run to get the Hurricanes in the red zone for the first time at the Florida State 17. But the Seminole defense answered the challenge and held the Hurricanes to a 31-yard field goal by Michael Badgley that evened the game at 3-3.

Miami’s turnover chain made its second appearance of the game, when senior cornerback Dee Delaney picked off Blackman on the first play from scrimmage following the Badgley field goal. Delaney, who jumped in front of a ball thrown deep for receiver Nyquan Murray, gave Miami the ball at the FSU 47.

Three snaps later, Rosier and Richards teamed up for another big play. The duo connected on a 15-yard strike on third-and-10 to extend Miami’s drive and move the Hurricanes to the Seminoles’ 32-yard line. But the Noles stopped Miami’s momentum when freshman defensive back Stanford Samuels intercepted Rosier in the end zone on an overthrown pass intended for Lawrence Cager.

Miami’s defense responded to the sudden change and forced a punt that Berrios returned for a career-best 44 yards to the Florida State 21-yard line. One play later, Berrios hauled in a touchdown pass from Rosier that put the Canes up, 10-3.

Berrios, who finished with eight catches for 90 yards and two touchdowns, became the first Hurricane since Reggie Wayne in 2000 to catch a touchdown in each of the first four games in a season. The senior wideout has tallied a receiving touchdown in five consecutive games dating back to the 2016 Russell Athletic Bowl victory over West Virginia, becoming the first Hurricane to accomplish the feat since Leonard Hankerson in 2010.

“He’s great, man,” Rosier said of Berrios. “He’s so attention to detail and that’s what makes him so good. He just does his job, does it every play and I just know Braxton is a guy I can rely on.”

The Seminoles (1-3, 1-2 ACC) tied the game with 12:17 remaining when Blackman hit tight end Ryan Izzo for a 15-yard touchdown, evening the score at 10. The six-play, 77-yard scoring drive was sparked by a 46-yard run on the opening snap by freshman Cam Akers that put the Noles on the Miami 31.

Florida State took its second lead of the game, when kicker Ricky Aguayo converted a 38-yard field goal to put the Seminoles up three, 13-10, with 6:55 to go in the contest.

But Miami charged back on their next possession, as Rosier hit Berrios for a 15-yard gain and tight end Christopher Herndon IV on back-to-back passes for 37 and nine yards, respectively, to reach the FSU 14. Berrios found the end zone for the go-ahead touchdown, corralling a seven-yard pass from Rosier to put the Hurricanes up, 17-10, with 5:09 on the clock.

“He was ready for his moment,” Berrios said of Rosier. “This was his moment. We’ve had a close game or two leading into this, but this was it. Are we going to turn the streak around? Are we going to do exactly what we need to do to win this ball game? That’s really all it was. It was composure. Doing what we’ve been doing all week and finally settling down and executing.”

The Seminoles would answer on the ensuing drive, when freshman quarterback James Blackman found junior receiver Auden Tate for a 20-yard score that put Florida State back in the lead, 20-17, with 1:24 remaining in the game. Blackman finished his first game against the Hurricanes 17-for-28 for 203 yards, two touchdowns and a pair of interceptions.

“Complete confidence,” Berrios said of the team’s mindset entering its final possession. “We’ve been doing it the whole second half. Plays that worked time and time again. It was the moment for us. In years past, we’ve folded in those moments. All those last fourth quarter drives, we’ve folded. We kind of knew it was going to come down to this with either the defense can get a last stop or the offense can get a last touchdown and we executed.”

Facing a high-pressure situation with less than 90 seconds remaining in the game, Rosier connected with Langham to complete a game-winning nine-play, 75-yard scoring drive over 1:18 that snapped a seven-game FSU winning streak and improved Miami’s lead in the all-time series to 32-30.

“I just saw a 6-6 receiver out there in open space, so I just gave him a ball that he could catch and go make a play and he did his job,” Rosier said. “Congrats to Darrell.”

While the second half was a barrage of scoring, the first half was a defensive battle, with each team holding their opponent to a 1-for-8 third down conversion rate over the opening 30 minutes.

Miami picked up seven tackles for loss and three sacks in the first half. The Hurricanes’ defensive line was active, with ends Joe Jackson and Demetrius Jackson, as well as tackle Kendrick Norton, each picking up a sack. The Canes also had a pair of pass breakups and an interception, while holding the Seminoles to just three points.

“We came here in 2014 and lost, 2015 and lost, and last year we lost,” Demetrius Jackson said. “Now we beat them. Got them out of the way. This wasn’t the ultimate goal. We know we could beat Florida State. We know we can line up against anybody on any given week and I like us. It’s time now. Take one game at a time. The ultimate goal is the ACC Championship.”

A roughing the passer penalty on third-and-15 from the 50-yard line negated what was an incompletion by Blackman and gave the Seminoles a fresh set of downs from the Miami 35. Blackman followed with an 11-yard run on a zone read and Jacques Patrick rushed for 10 yards to put the Noles in the red zone at the Miami 14. But the Hurricane defense would hold the Seminoles to a 27-yard field goal by Aguayo that gave Florida State a 3-0 lead with 4:20 remaining in the first quarter.

Jackson redeemed himself with 1:04 remaining in the first half, picking off Blackman at the Miami 32-yard line. The junior defensive back snared an overthrown pass intended for Izzo and became the seventh different Hurricane to don the turnover chain this season.

The Seminoles finished the first half with three tackles for loss and a sack, allowing the Hurricanes to muster just 1.9 yards per play. Florida State held Miami to just four first downs in the first half, while the Noles managed 10 against Hurricanes’ defense. Their sustained drives gave them a 19:07 to 10:53 advantage in time of possession. The Hurricanes were shut out in the first half for the first time since their 2015 game at North Carolina.

With the victory, the Hurricanes have won nine straight games dating back to October 2016. It’s the first such streak for the Hurricanes since winning nine games from 2012-2013. Miami’s nine-game winning streak is the third longest currently active at the FBS level, but that does not mean that the Hurricanes are getting complacent after their success.

Miami returns to Hard Rock Stadium next Saturday to host Georgia Tech in their first home game since a 52-30 victory over Toledo on Sept. 23.