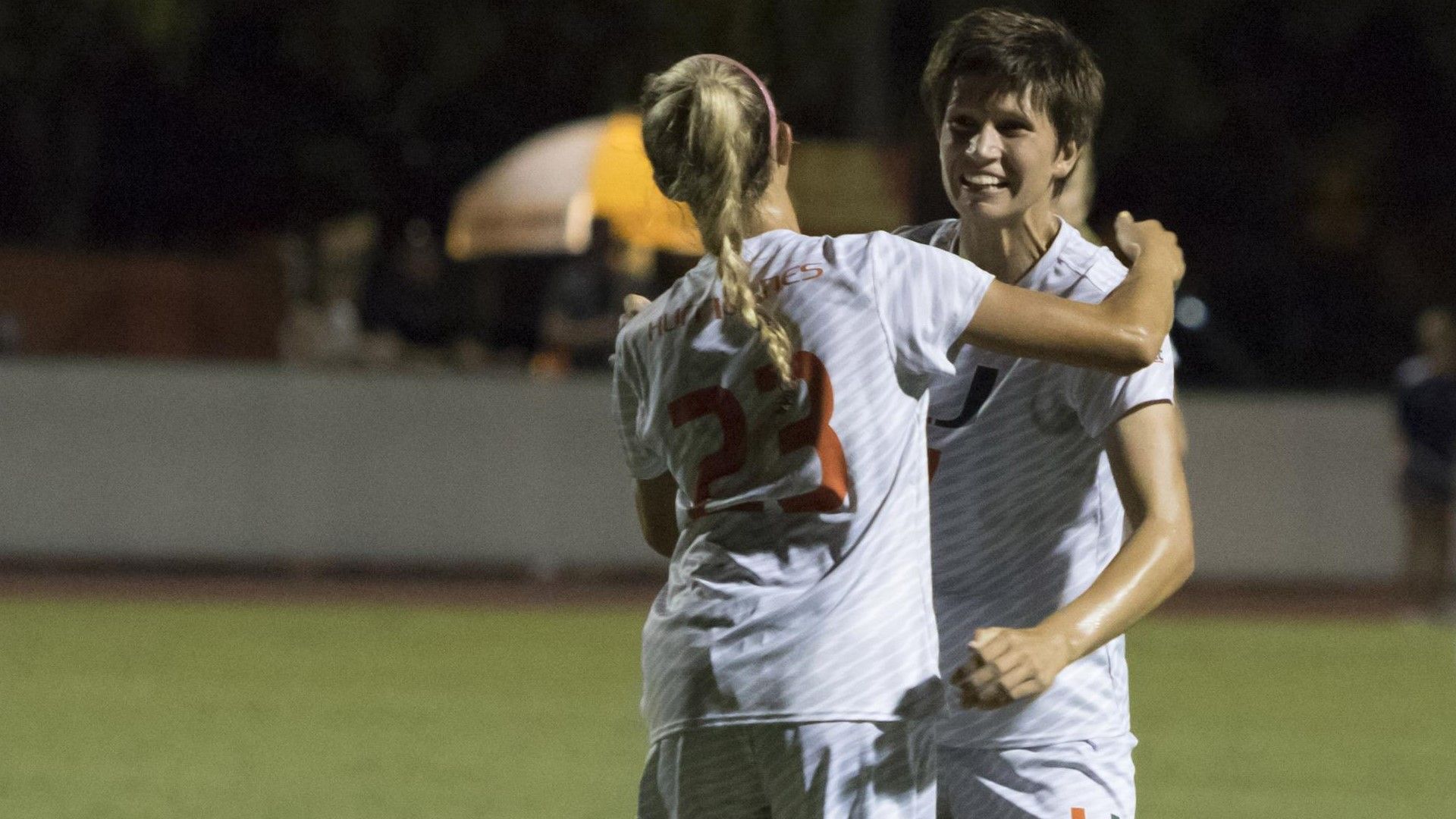 HAMDEN, Conn. – The University of Miami soccer team got back to its winning ways Sunday afternoon at Quinnipiac, earning a 3-1 triumph in its final non-conference road contest of the season.

In a match it thoroughly controlled at Quinnipiac Soccer Turf Complex, Miami (4-2-0) scored a pair of late goals after the Bobcats pulled level early in the second half. All three Hurricane goal scorers on the day netted their first tallies of the season.

“I was proud of the team for scoring some really nice goals today. We talked about dominating a game and we did that,” Miami head coach Mary-Frances Monroe said. “I wish a few more would have gone in the goal, but a win on the road is huge. We had the majority of possession and limited our turnovers.”

The Hurricanes had a strong hold on the run of play throughout the first half, putting together numerous quality chances. However, it was not until the closing minutes of the session that they got on the board.

A cross came into the box to sophomore midfielder Lauren Markwith, who had her shot saved by Quinnipiac (3-2-0) sophomore goalkeeper Olivia Myszewski. The rebound bounced back to Markwith, whose second attempt clanged off the post.

The third time was the charm, as the ball then came back out to the Huntington Beach, Calif., native and she lightly tapped it into the net to put a goal on the board in the 43rd minute.

Miami went into the intermission with a 1-0 lead on the scoreboard, as well as a 7-0 advantage in shots on goal and a 13-2 edge in overall shot attempts.

Not long after the break, the Bobcats equalized on their lone shot on goal of the match. Junior forward/midfielder Nadya Gill beat a diving Phallon Tullis-Joyce, as her superb strike from about 25 yards out went past the redshirt junior goalkeeper’s arms and into the net.

The 53rd-minute goal by Gill, which came unassisted, was just the second goal Miami has allowed this season that did not come on a penalty kick.

Miami nearly re-took the lead in the 74th minute when senior forward/midfielder Grace Rapp was one-on-one with Myszewski, but sent her shot just high.

Nonetheless, just over 60 seconds later, Rapp contributed an assist on what would prove to be decisive goal. The co-captain took the ball down the middle of the field and played it out wide to the left to redshirt sophomore midfielder Ainsly Wolfinbarger, who made her first start of the season Sunday.

Wolfinbarger then crossed the ball into the box and found the foot of Michelle Giamportone. The freshman forward took a one-time shot that rolled past Myszewski for the first goal of her career, putting the Hurricanes ahead in the 75th minute.

In the 79th minute, junior midfielder Jamie Brunworth upped the lead with an outstanding goal. The Littleton, Colo., native settled a deflected ball approximately 35 yards from the net and ripped a vicious shot upper 90 out of Myszewski’s reach to make it 3-1.

“We had so many chances and were finally able to put the ball in the back of the net,” Monroe said of what clicked offensively on the two quick goals. “Their goalkeeper made some great saves on us. Michelle had a wonderful goal in the box that sealed the win.”

Miami ended the rainy afternoon with a 32-3 advantage in shot attempts, including a 14-1 edge in shots on goal. The Hurricanes also took seven corner kicks and the Bobcats, for whom Myszewski made 11 saves, did not attempt one.

The Hurricanes will now return to Coral Gables, Fla., where they are set to host the College of Charleston Friday at 7 p.m., at Cobb Stadium.