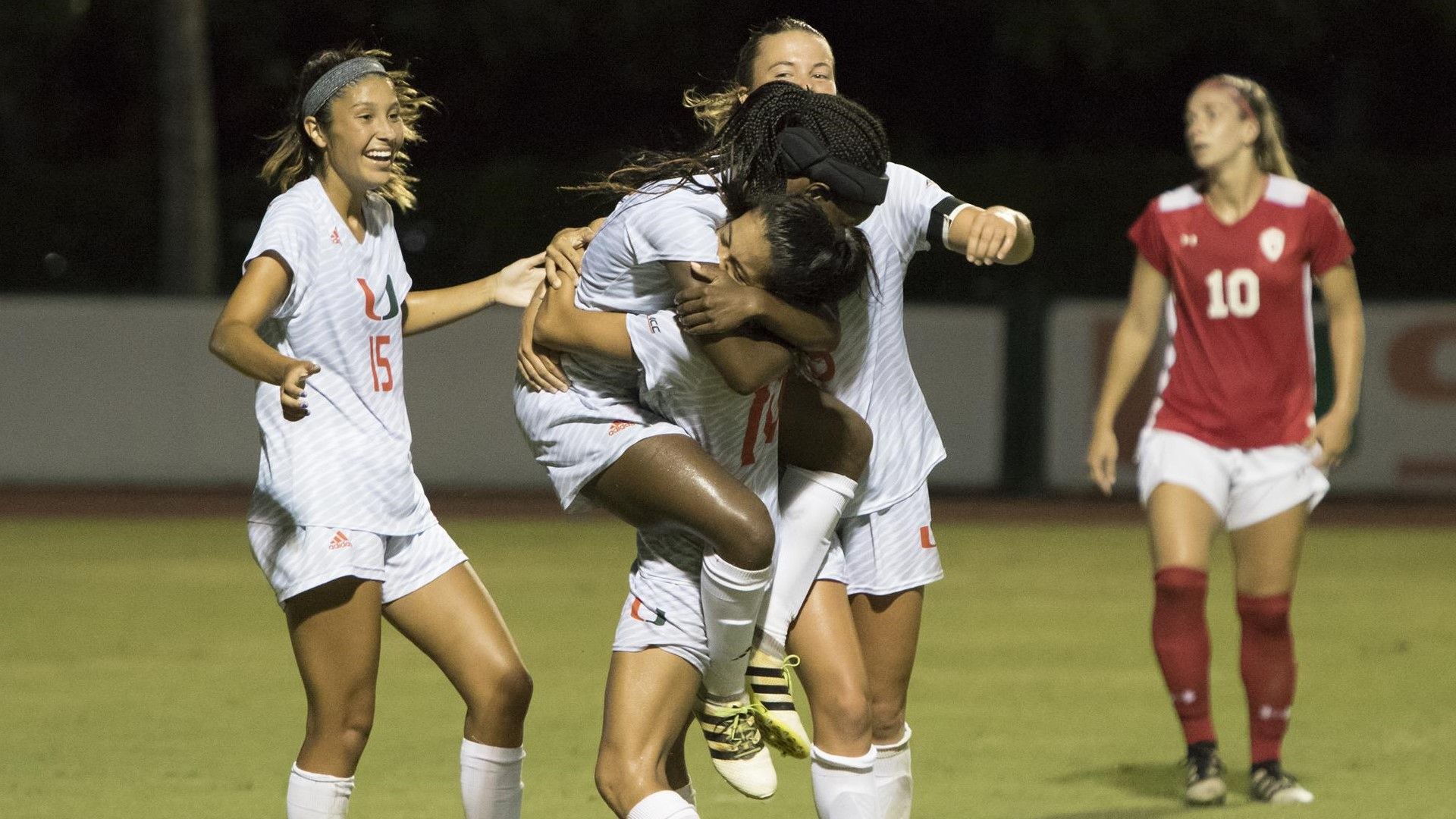 CORAL GABLES, Fla. – The University of Miami soccer team turned in a scintillating all-around showing in its first match of the regular season, cruising to a 6-0 victory over St. Francis (PA) Friday night at Cobb Stadium.

Senior forward Ronnie Johnson led the way for the Hurricanes with the third multi-goal performance of her career. Meanwhile, Miami (1-0-0) did not allow a shot on goal, marking the first time it has done so in a match since Sept. 5, 2008 in a 3-0 win at Arkansas-Little Rock.

“That’s amazing because we graduated three senior starters in the back and we’ve been really focusing on our back four,” Miami head coach Mary-Frances Monroe said of the defensive accomplishment. “I said at halftime, ‘No shots against, we’re up, 4-0. Let’s not let down and let’s make sure we stay composed and plugged into the game.’ So, I’m just really proud of all of them, collectively, defensively.”

After Kristina Fisher was denied on a breakaway on the team’s first shot of the year, she chipped in with an assist moments later for the Hurricanes’ opening tally of 2017.

The sophomore midfielder played the ball up the field to Johnson and she did the rest. In a one-on-one situation with St. Francis (0-1-0) redshirt sophomore goalkeeper Julia Hernan, Johnson sent to the ball far post into the side netting to give the Hurricanes the edge in just the sixth minute. Senior forward/midfielder Grace Rapp notched an assist, too.

Johnson registered her second goal in the 29th minute, dribbling down the field with the ball and then using the outside of her foot to slip it past Hernan, who was off her line trying to make a play.

“Ronnie scores goals and that’s what we need her to continue to do as we move forward,” Monroe said of the Oakville, Ont., native, who tallied her second-career five-point showing.

Miami upped its lead to 3-0 in the 34th minute when Lexi Castellano got on the score sheet for the first time as a Hurricane.  The sophomore midfielder headed home a corner kick from junior midfielder Jamie Brunworth, finishing to the far post. Friday marked the first regular season start for both players.

Redshirt sophomore midfielder Ainsly Wolfinbarger followed suit in the 38th minute with the first goal of her career. In her return to regular season action after missing the 2016 campaign, Wolfinbarger received a pass from Fisher and drilled it into the net, far post, from the edge of the box.

“Having Ainsly back, I have chills just knowing how much she has gone through physically and that she has worked so hard,” Monroe said. “She didn’t have to score; I would’ve been still proud of her, but she got a nice goal today.”

Miami entered the locker room at the break with not just a 4-0 lead, but a 10-2 advantage in shots. The Hurricanes scored on all but one of their shots on goal and held a 4-1 edge in corner kicks.

Sophomore forward Dejah Cason—on her birthday—increased Miami’s cushion to five goals the 58th minute. The Hollywood, Fla., native headed in a cross from the corner off the foot Johnson. Fisher also logged her third assist of the night on the play.

A pair of freshmen forward making their official collegiate debuts linked up for the final goal of the evening. Michelle Giamportone sent a beautiful pass to a charging Tia Dupont, who put it out of Hernan’s reach in the 87th minute, giving both players their first points as Hurricanes. Brunworth also received credit for an assist, giving her the first multi-assist match of her career.

With the triumph, Miami upped its all-time record in regular season openers to 11-9-0 and its mark in home openers to 10-9-1. The Hurricanes, who were facing the Red Flash for the first time, have now opened consecutive seasons with a shutout victory in which they scored at least six times.

The Hurricanes concluded the evening outshooting the Red Flash, 16-5, tallying 10 shots on goal and posting a 7-2 edge in corner kicks.

“Very excited and very proud of them,” Monroe said. “We wanted to go into this game, our home opener, with a lot of confidence, a lot of energy and work on the things that we’ve been training for in preseason.”

Redshirt junior Phallon Tullis-Joyce became the sixth goalkeeper in program history to tall double-digit shutouts in her career, while Johnson’s game-winning goal was her fourth as a Hurricane, moving her into a four-way tie for ninth all-time at Miami.

Miami returns to the field Sunday at 6 p.m., when it travels across town to face FIU in Miami at FIU Soccer Stadium, starting a stretch of five consecutive road outings.