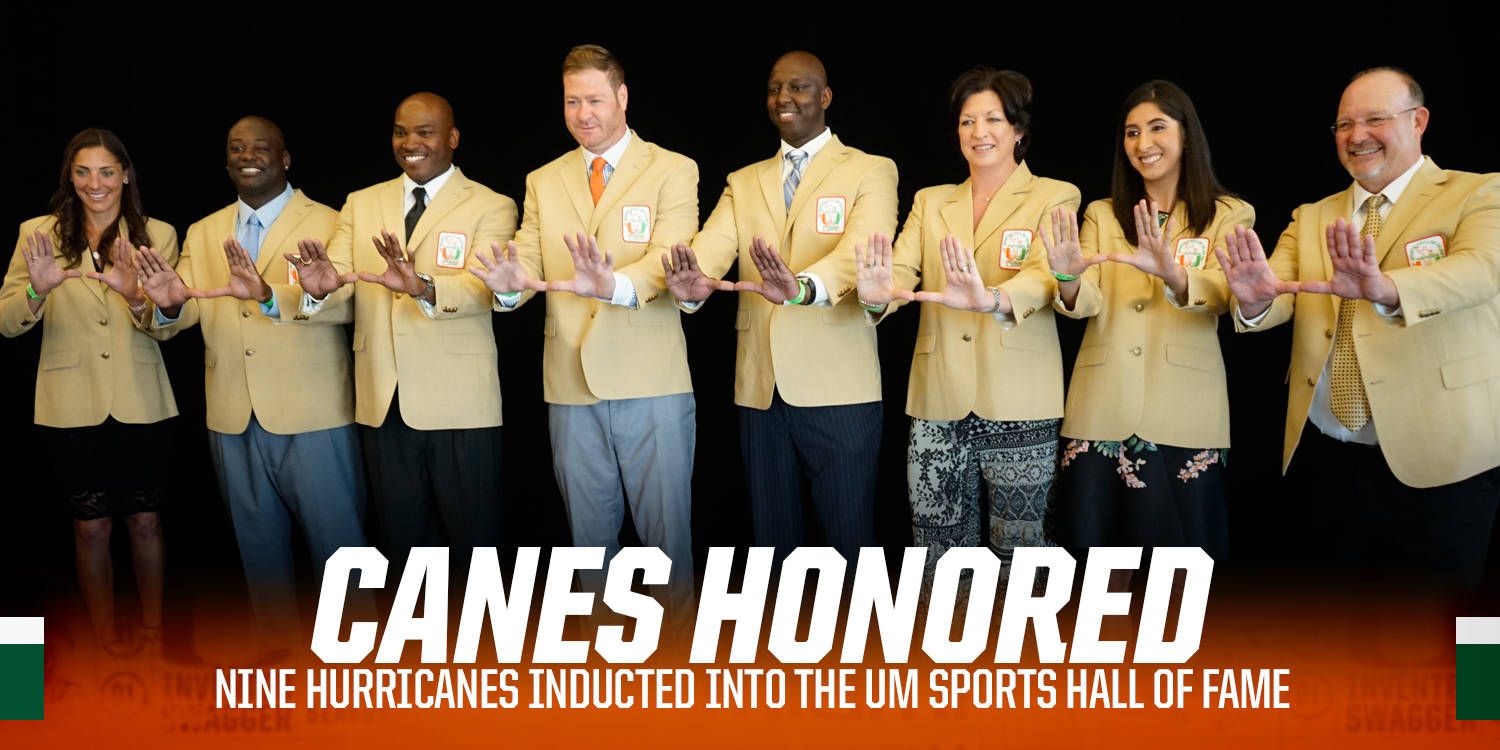 The evening began with former Hurricane offensive lineman Joaquin Gonzalez being presented with his Hall of Fame jacket. The South Florida native was inducted to the UM Sports Hall of Fame Class of 2016, but elected to wait until 2017 to receive his hall of fame jacket, as he was unavailable to attend the 2016 banquet.

With the newest additions to the Hall of Fame, there are now 309 members.

The class of 2017 spans over 30 years of Hurricane athletics, ranging from Davies, who played from 1983-1986, to Meier, who currently serves as the Miami women’s basketball coach.

In addition to honoring its new members, the Hall of Fame also honored kicker Michael Badgley as the 24th recipient of the Walter Kichefski Endowed Scholarship.

Listed below are the complete biographies on each of the nine UM Sports Hall of Fame inductees from The Class of 2017.

Audra Cohen                  Tennis                2005-2007
Cohen garnered four All American honors in her two years at Miami, being named as both a singles and doubles honoree in both her two years with the Canes.  In 2005-2006, for UMSHoF member Coach Paige Yaroshuk-Tews Canes, she went 34-2 in singles winning the International Tennis Association (ITA) National Indoor Championship and was named the ITA National Player of the Year, as well as the Atlantic Coast Conference (ACC) Player of the Year.  She was ranked the ITA Number 1 College Tennis Player in the United States in both 2005-2006 and 2006-2007.  A three-time finalist for the Honda Sports Award, given to the best female athlete in the U.S. in 12 different sports, Cohen was named the winner for tennis in 2007. (Note- she spent 2004-2005 at Northwestern and was a finalist that year, too)

Steve Edwards               Basketball            1992-1996
One of the most prolific long-range shooters in Miami history, he still ranks second in the record books with 265 career three-point field goals, a mark that is still the BIG EAST conference record.  Edwards, a two-time honoree as “Mr. Basketball” in the state of Florida, was named to the conference All-Freshman team in his first year for UMSHoF member Coach Leonard Hamilton.  Plagued by injuries his whole career, he still led Miami in scoring in three of his four seasons and ranks 13th all-time with 1,393 points and is 10th in career steals.  “Stevie” led the Canes to their first post-season appearance (1994-1995) since the rebirth of the basketball program and back-to-back-winning seasons.

James Jackson            Football                1996-2000
Though he shared the backfield with UMSHoF members Edgerrin James and Clinton Portis, Jackson was a true workhorse for the Canes, currently the fourth leading rusher in school history with 2,953 yards, just 7 yards behind James for the third spot.  His 541 rushing attempts is the second most by a Hurricane running back and his 29 rushing touchdowns is ranked fourth all time.  His overall total of 32 touchdowns (29 rushing, 3 receiving) is tied for third place.  A second team All-BIG EAST selection in 2000, he led the Canes in rushing yards (1,006), becoming just the 5th Miami rusher to pass 1,00 yards for a season, as the team completed its comeback to national prominence by going 11-1, and finishing #2 in the polls.  Drafted in the third round of the 2001 NFL Draft, James spent five seasons in the league.

Katie Meier                    Coaching            2005-Present
Entering her 12th season at the helm of the Hurricane’s women’s basketball program, Meier has worked tirelessly to put her mark on Miami’s program and to build a winning tradition.  In 2015-2016, she guided the team to its seventh consecutive postseason, a fifth trip to the NCAA tournament in the last six years and a sixth 20-plus win season in the last seven years, all extending program records.  In 2010-2011, she led the Canes to a 26-3 regular season record, 12-2 in the Atlantic Coast Conference (ACC) and gained their first ACC regular season co-championship, their first NCAA postseason berth since 1992, and Meier was named the ACC Coach of the Year and the Associated Press Co-National Coach of the Year.

Jeremy Shockey           Football               2000-2001
A junior college transfer, Shockey became a Miami legend with his first touchdown catch…a 13-yard pass from UMSHoF member Ken Dorsey in the final minute to defeat # 1 Florida State on national television 27-24 to cement Miami’s return to national prominence.  That season, he also caught a 44-yard, tackle-breaking touchdown as the Canes beat # 2 Virginia Tech.  In the 2001 National Championship season, he led the team with 45 receptions for 604 yards and 8 touchdowns and was named a first team All American by CNNSI and second team All American by the Associated Press, CBS Sportsline and ABC Sports, and first team All-BIG EAST.  A first round pick (14th overall) by the New York Giants in the 2002 NFL Draft, he spent 10 seasons in the league winning two Super Bowls and being named to four Pro Bowls.

Valeria Tipiana            Volleyball             2000-2004
One of the most honored players in the history of Miami volleyball, Valeria was named the 2002 BIG EAST Player of the Year, as well as a first team all conference player in leading Miami to its first ever NCAA tournament appearance in only the school’s second year of competition.  She was named second team All-BIG EAST in 2003, then was named a first team All-Atlantic Coast Conference (ACC) member when the Canes made the move to the ACC in 2004.  That  year, she became the first Hurricane player named an American Volleyball Coaches association (AVCA) honorable mention All American.  Tipiana was the first player to pass 1,000 career kills and is still in the Top 3 in career points, kills, service aces, and digs. She becomes the first volleyball player inducted in the University of Miami Sports Hall of Fame.