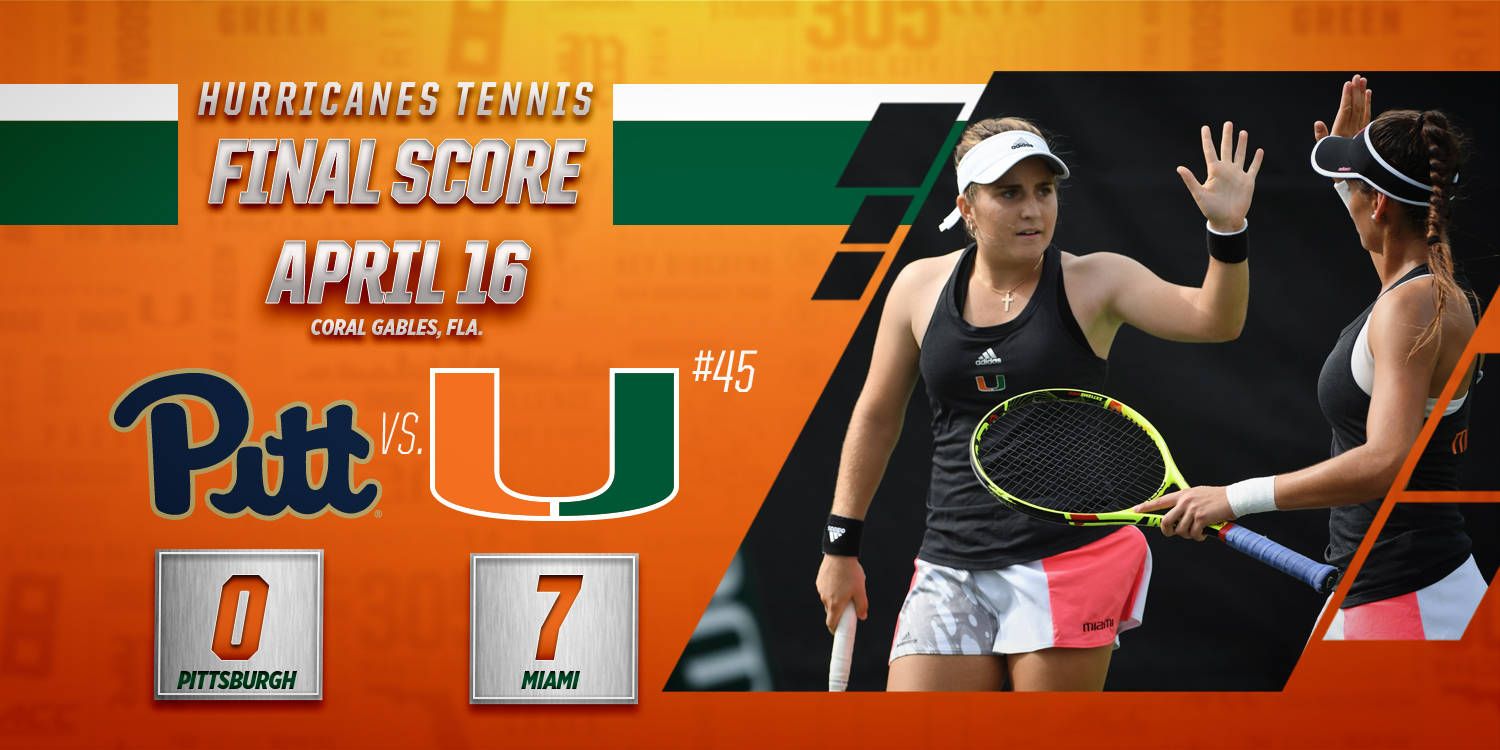 Following a senior day ceremony for Maci Epstein, No. 45 Miami easily took the doubles point and then continued its impressive showing during singles competition to move to 4-1 in its last five outings.

“I think, regardless of the score, I’m happy with the way that a few of our girls are striking the ball this week as opposed to last week,” Miami head coach Paige Yaroshuk-Tews said. “Lohan, Madcur and Culbertson, they’re striking the ball very well. It’s crisp coming off the strings. I haven’t have seen that in quite some time from Lohan, so it’s nice to see.”

The Hurricanes cruised in doubles competition, handily picking up both wins they needed to earn the opening point.

In the one match that was left unfinished, the Pittsburgh (3-14, 0-13 ACC) duo of Audrey Ann Blakely and Clara Lucas held a 4-3 lead over Epstein and freshman Dominika Paterova when play was halted.

Epstein was the first Hurricane to tally a singles win, notching a 6-3, 6-0 triumph against Okamoto in the final home match of her career. Her victory was the first of four for Miami (8-10, 6-6 ACC) in a span of approximately 10 minutes.

“I have a lot of respect for Maci’s collegiate career. A lot of it, obviously, didn’t happen here. The majority of it was at Virginia,” Yaroshuk-Tews said of the redshirt senior. “She was a kid who I recruited on the front end and we missed her the first time around. I’m happy that she’s ending her college experience on a positive note. It’s nice to see her out here with a smile on her face and enjoying her teammates and just enjoying the experience. That’s what it’s about. She’s been a great college player and she’s got a few matches in front of her, so hopefully she’ll end strong.”

No. 13 Lohan, the third-highest-ranked player in the ACC, was the next to seal her match, earning a 6-2, 6-2 decision versus Blakely.

Moments later, Madcur clinched the win for Miami, logging a splendid 6-1, 6-0 triumph against Lucas after a stellar performance.

Culbertson was the next Hurricane to wrap up a victory, as she finished off a 6-1, 6-2 defeat of Knezevic.

“We’ve been saying all year that we’ve got to get all these kids on the same page and if we can get them all playing great tennis, we can beat some good teams,” Yaroshuk-Tews said. “I know we can. They just have to know they can.”

The shutout was the third of the season for Miami and this marked the first time in 2017 the Hurricanes have tallied a 7-0 win, as the prior two were stopped when the match was clinched. Yaroshuk-Tews has now led the Hurricanes to 132 shutouts in her 16 years at the helm, including 75 since 2009.

Miami will begin the final weekend of regular season play Friday at 3 p.m., when it takes on Virginia Tech in Blacksburg, Va.