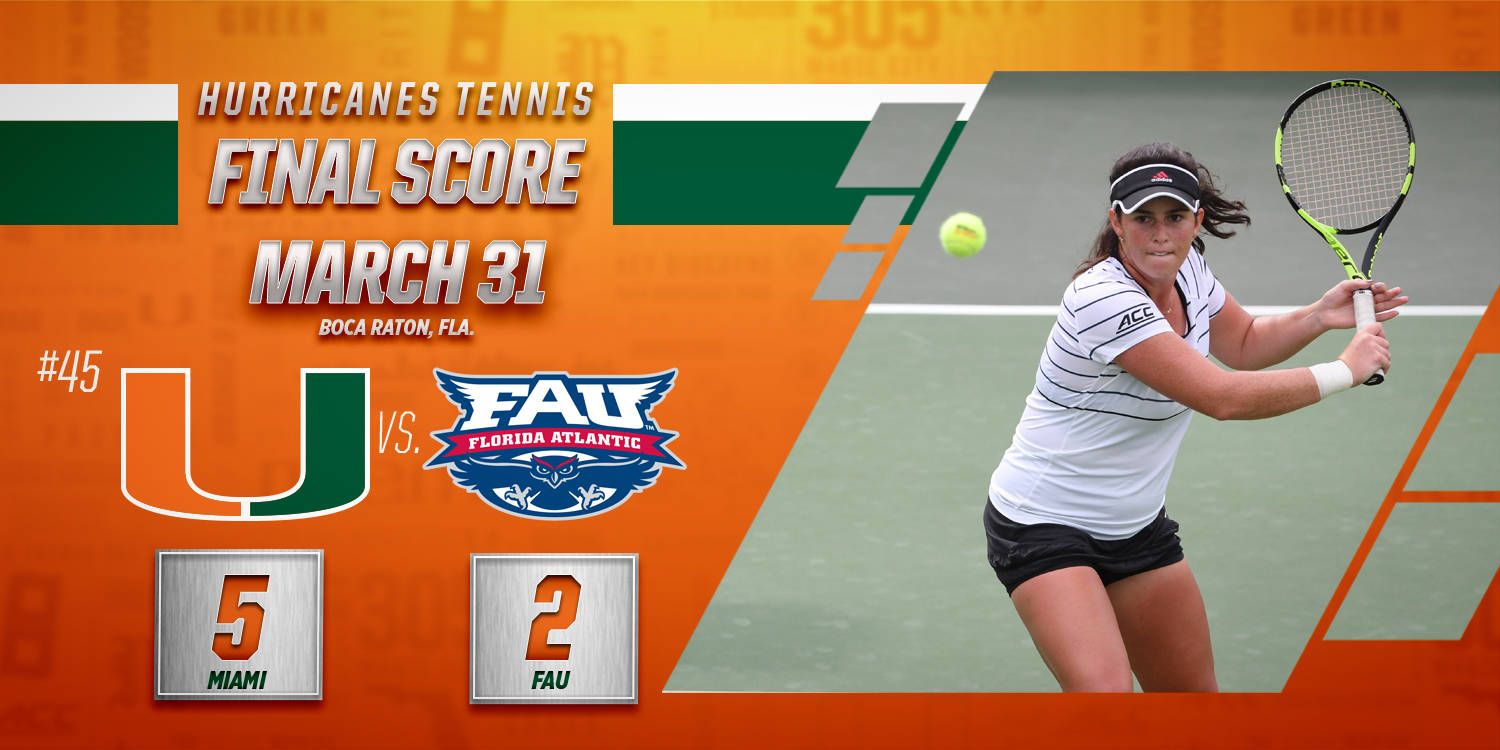 Despite playing without junior Sinead Lohan, ranked No. 11 nationally in singles, No. 45 Miami turned in a dominant performance at the FAU Tennis Complex to move to 29-0 all-time against the Owls.

“I think as far as the coaching staff is concerned, we know how good we could be and we know the talent we have,” Miami head coach Paige Yaroshuk-Tews said. “Obviously, I think losing takes a toll on the players emotionally, but we’ve never been a program that has really, truly focused on the wins and losses. We’re seeing it a little bit from a different side this season, but we’re trying to stay positive, we’re trying to stay up and we’re trying to end the season strong.”

Freshman Sara Culbertson and junior Silvia Fuentes then evened the tally by posting a 6-3 victory against Lyndsey Boos and Marisa Ruiz. Just seconds later, redshirt senior Maci Epstein and freshman Dominika Paterova sealed the doubles point for the Hurricanes with a 6-3 triumph over Alisa Rudenko and Heather Walton.

Paterova continued her strong play into singles, rolling to a 6-2, 6-0 triumph over Boos to double Miami’s lead. It marked the first win of her career at the No. 2 singles position.

Just as she did with the doubles point, Epstein then clinched the overall match for Miami (5-9, 3-5 ACC) by posting a straight-set win of her own, as she topped Rudenko, 6-2, 6-2.

After the result was already sealed, the Owls got on the board with a 7-5, 6-2 victory by Gutierrez over Fuentes.

“I was happy to see that Domi played just really disciplined tennis. We know she’s talented, she’s just got to stay focused and stick to basic patterns and she was able to do that today,” Yaroshuk-Tews said. “Estela getting another win at the top position is a good sign, I think. To have Maci back in playing [feeling more healthy] obviously strengthens our lineup, so I think we were just a little stronger top to bottom.”

With the victory over the Owls, Yaroshuk-Tews now has 260 wins in the 13 years the Hurricanes have been in the ACC. That mark ties her with Phil Rogers, who led Virginia for 23 seasons, for fifth place on the conference’s all-time wins list. In her 16-year career as a whole, Yaroshuk-Tews is 311-100.

The Hurricanes, who notched their first road win of the season Friday, will return to action April 7 in Louisville, Ky., when they resume ACC play by taking on Louisville at 3 p.m.